Is that it? Is that the (sad) end? (WARNING NOT FOR THE EASILY UPSET).

Regular reader(s?!) of this blog will know all about "our" hedgehog(s) - and the fact that I spend a lot of my time digging tunnels under our fences and doors to allow these hedgehogs the chance to move around freely and breed and escape foxes if possible.

I know that comes with a risk - these hedgehogs are then exposed to CARS and ROADS.

And with that in mind today it is with a (perhaps prematurely?) heavy heart that I bring you bad news.

I record the nightly nocturnal shenanigans in our garden with the help of two infra red video trail cameras.

For the past five nights I've not recorded any hedgehog activity in our gardens, apart from what LOOKS like the vixen fox taking three baby hedgehogs back to her cubs for food (I can't be sure that's what they are and won't post THAT video clip here) but again, that's what it LOOKS like.

Four mornings ago now I also noticed a newly-squashed hedgehog on the road outside our house, albeit 100 yards or so from our house (no distance at all for hedgehogs - ours used to regularly run the 40 yards of our garden in a minute). 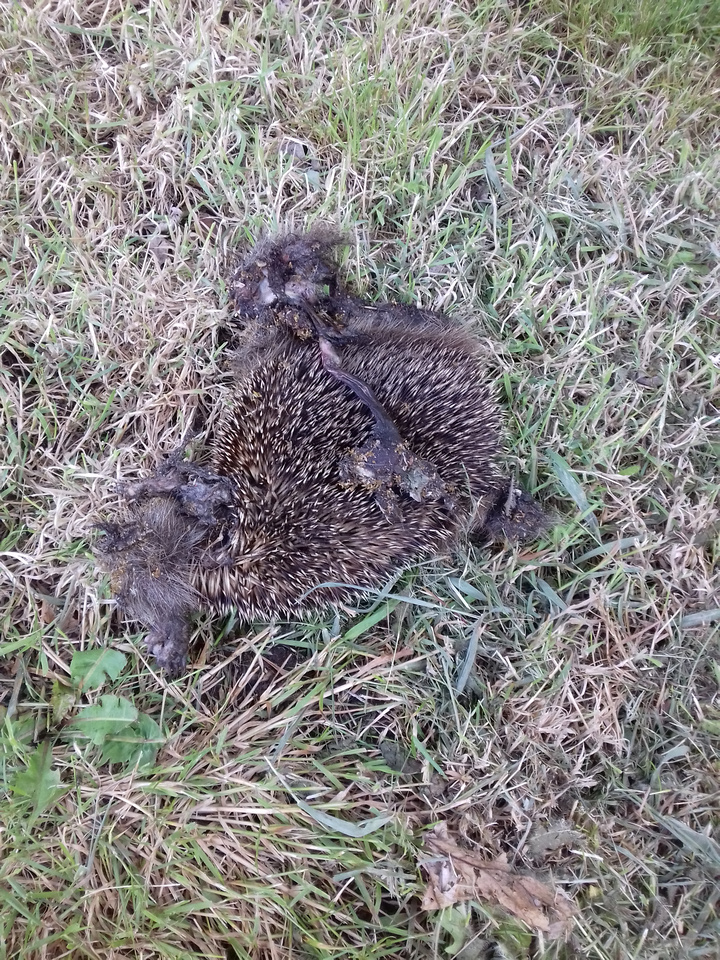 Look... I've written "our" hedgehogs off before, at least twice.

But I've also SEEN previous hedgehogs in our gardens been EATEN by the local foxes and also SQUASHED by cars (and we live in a 20MPH zone!).

I may be premature again with my writing off of our local hedgehogs - but it really doesn't look good at present.

The video clip below is a compilation of the last four or five clips of our hedgehogs ("O" was our original, older, more "well-hung" male who seemed to disappear some time ago... and "P" was the taller, smaller, less well-endowed male I think).

The video clip does NOT include footage of the local vixen taking three (what looks like) baby hedgehogs back to her cubs across our garden, because I can't be 100% sure that's what the items in her mouth are. (She takes them across our garden one at a time).

The video also gives a little advice for anyone interested in helping our beleaguered hedgehogs.

Although I would add here, please don't encourage foxes into gardens. They really aren't great for anything else in the garden. In fact, that's putting it politely.

To be more frank, they're bleeding awful things, as far as the rest of "your" garden wildlife is concerned.

They'll EAT anything and everything - stag beetles, hedgehogs, newts, moths... the lot.

Of course the neighbourhood moggies will be blamed by the (often wilfully-) ignorant for killing millions of birds, (this has NO documented, appreciable effect (AT ALL) on garden bird numbers - garden birds in general are INCREASING in number unlike their specialist (farmland, heathland etc) counterparts), but cats simply aren't the problem in the UK like they are in (for example) Australia.

FOXES are FAR more devastating in suburbia. And not towards birds of course.... but a problem to EVERYTHING ELSE.

Like I say, I HOPE I'm being very premature here and our hedgehogs are OK and perhaps even still around.

And I'll keep my fingers crossed.