I know, April isn’t six months in to a calendar year is it, but as I started “800 yards of ‘mac” last November (not this January), we are indeed 6 months into this 12-month long project – halfway through!

Previous 800 yards of 'mac blog posts can be found by clicking the links below:

There were quite a few signs of life stirring in March along the 800 yards, but April has brought with it a veritable explosion of activity, as it always does.

The flowers have erupted from the road verges (mouse ear, bluebells, wood anemones and celandines in photographic order below) 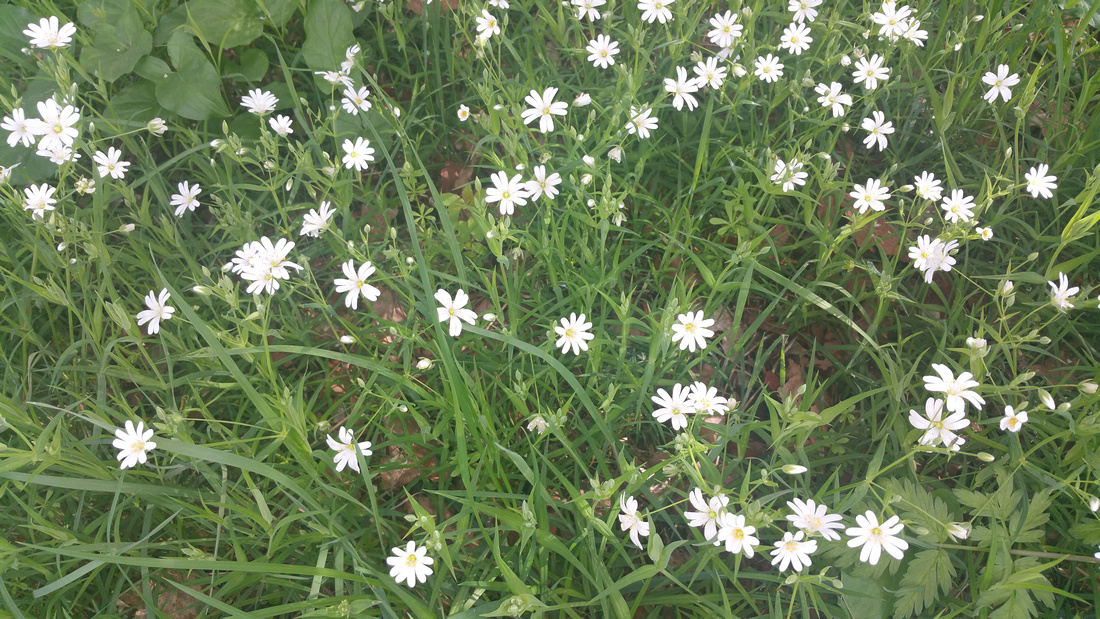 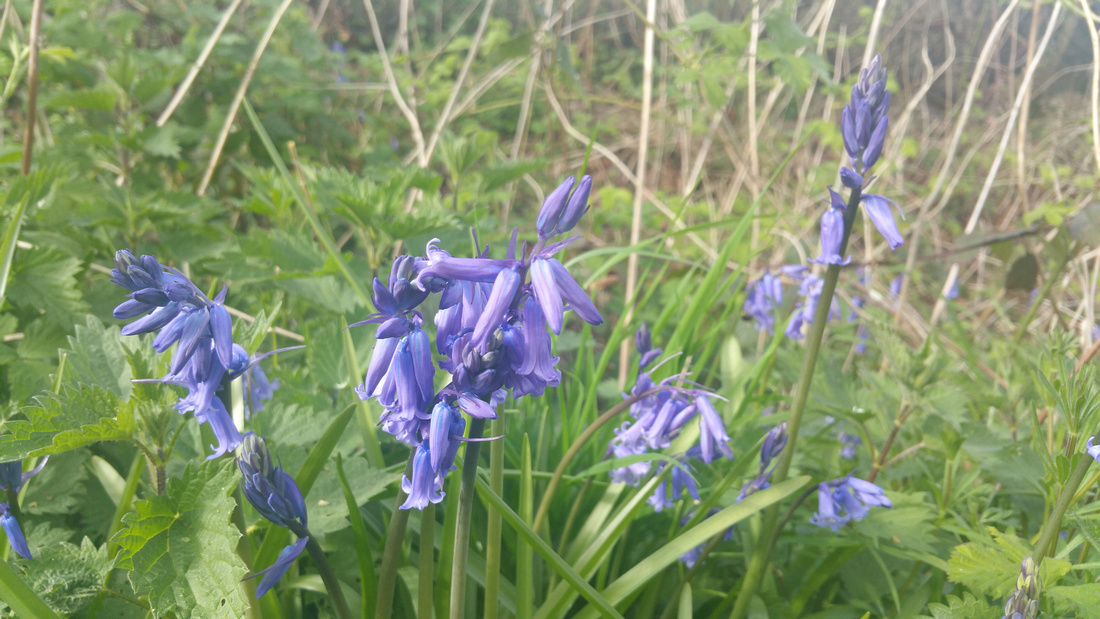 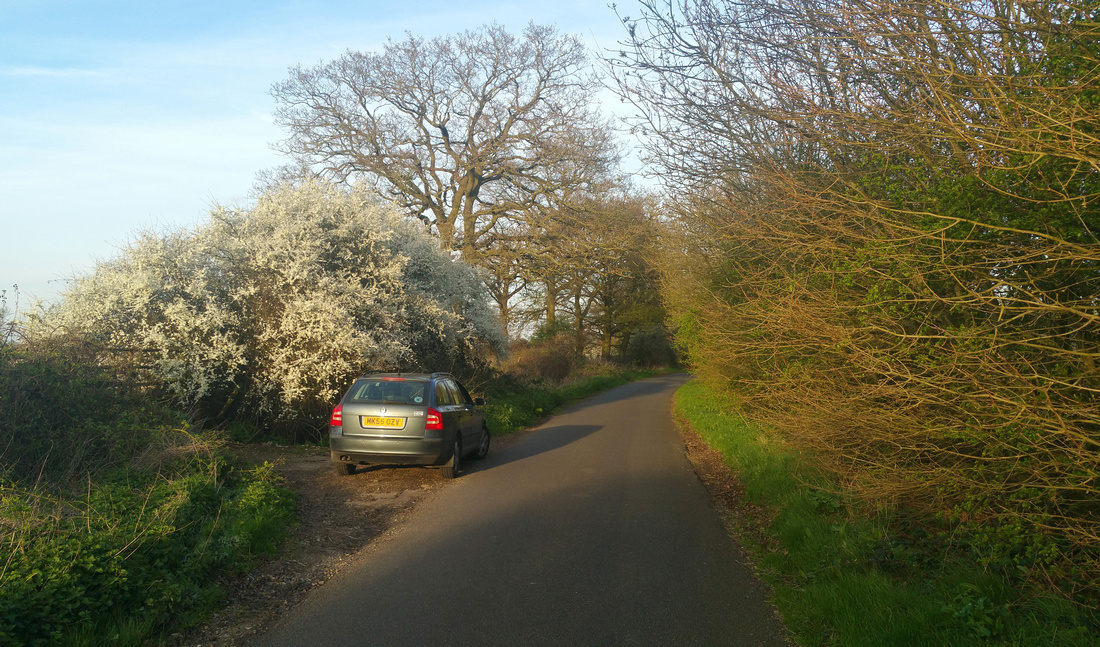 …or started to bud and leaf in earnest now, like the huge, gnarled oaks (see photo below with my new car in the distance) which line the 800 yards and give the bigger birds (owls, woodpeckers, jackdaws etc) somewhere to rest and perhaps nest. 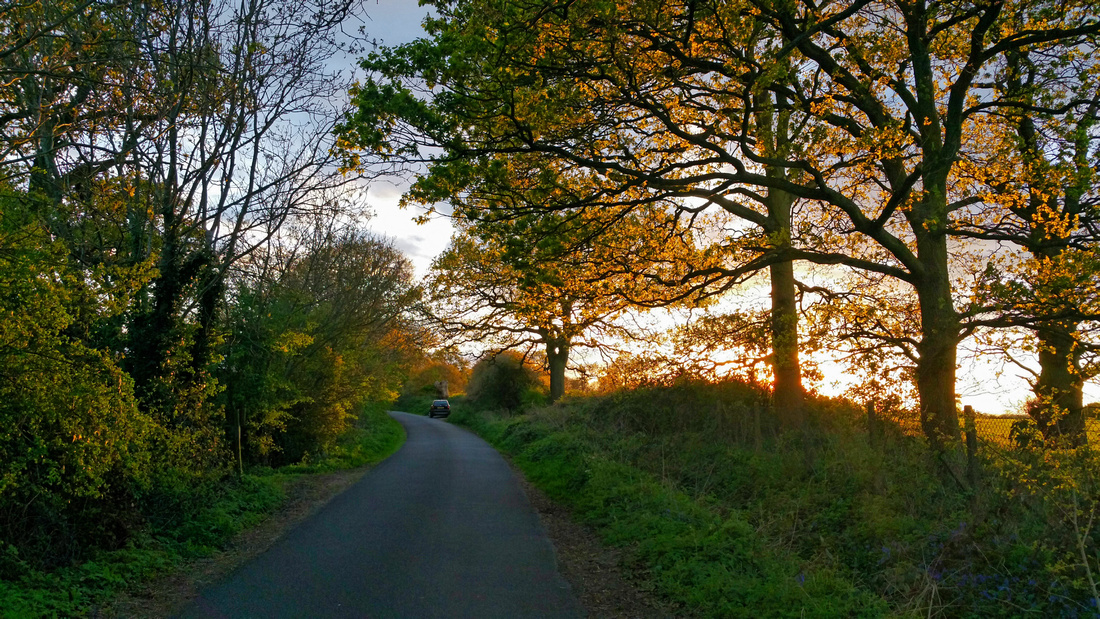 I love the appearance of blackthorn (sloe) blossom. It coats our hedges all over the country in April, and is never hidden by foliage as happens with its sister, hawthorn. Someone has given each blackthorn bush or hedge a thick dusting in icing sugar I think each April, a dusting which only seems to last about a week, but a spectacular week it is, each April. As soon as an April wind blows, the blackthorn blossom gets blown off the hedges and bushes and it feels like you’re walking or driving through light snow when that happens.

Enough of plants – what about the animals along the 800 yards?

Well… the barn owls are still in their hollow stump. I mention this with a little caution as for about 10 days (up until yesterday in fact and I write this on the 13th April), I thought they’d left as I’d not seen them since the first few days of the month.

To be honest I expect them to leave for the summer. This has happened before – I see a barn owl in this stump all winter and as soon as the breeding season properly starts – it disappears for months. The stump is not a great spot to breed and raise young (as it’s RIGHT on the road) so I’d almost prefer it if they did leave to raise a family.

That all said, I’ve not seen BOTH owls in the stump for some time now. I assume they’re still together (I don’t think owls would pair up in such a spot (surrounded by other, very suitable roosts) if they weren’t intent on mating) but I’m not 100% sure.

Anyway… I know at least one barn owl is still in the stump and I assume both still are -  in which case there’s now a chance the female is sitting on eggs perhaps?!

The photo below shows the 800 yards at night – a time when I’m often driving or walking down it, looking for owls. 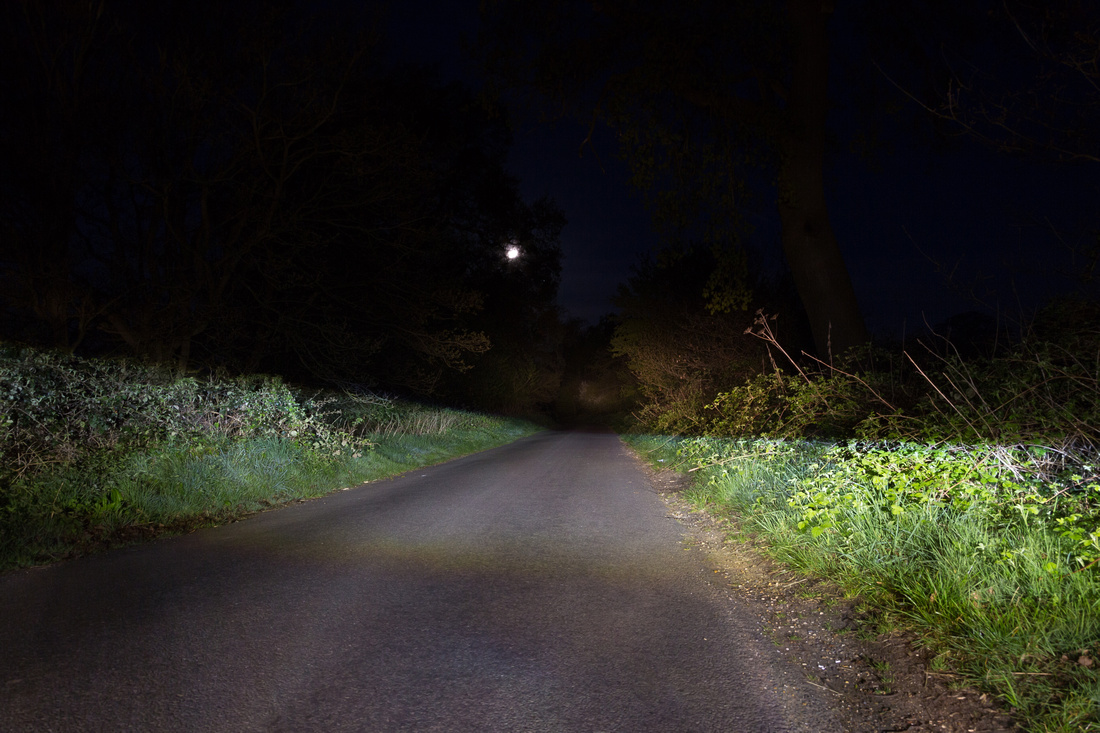 I’ve located yet another barn owl in the area on my “wildlife drives”, but not on the 800 yards itself. About a mile away from the stump, in a new, large, owl nest box put up quite deliberately (it looks like) to attract barn owls. The box is quite well hidden (about a quarter of a mile away from a road) but my eagle (owl?) eyes spotted it a few days ago, I watched it at dusk and sure enough, out flew a barn owl! Rather like the stump owl(s?), I’m not sure if there was another owl sitting on eggs at the bottom of the box – but I only saw one leave the box at dusk. Anyhoo, great news and I think that makes FOUR barn owls I’ve found in the local countryside near our house in the last five years – not bad going.

Back to the 800 yards now and whilst I haven’t seen the little owls for a month or two (although I think I know where they’ve gone too!) I’m happy to say that a pair of kestrels have set up shop in one of the nest boxes just off the road. In the photo below you’ll have trouble making out the kestrel in the shot (it’s the female and its sitting in the middle of the top of the cattle shelter) but you’ll just have to take my word for it. 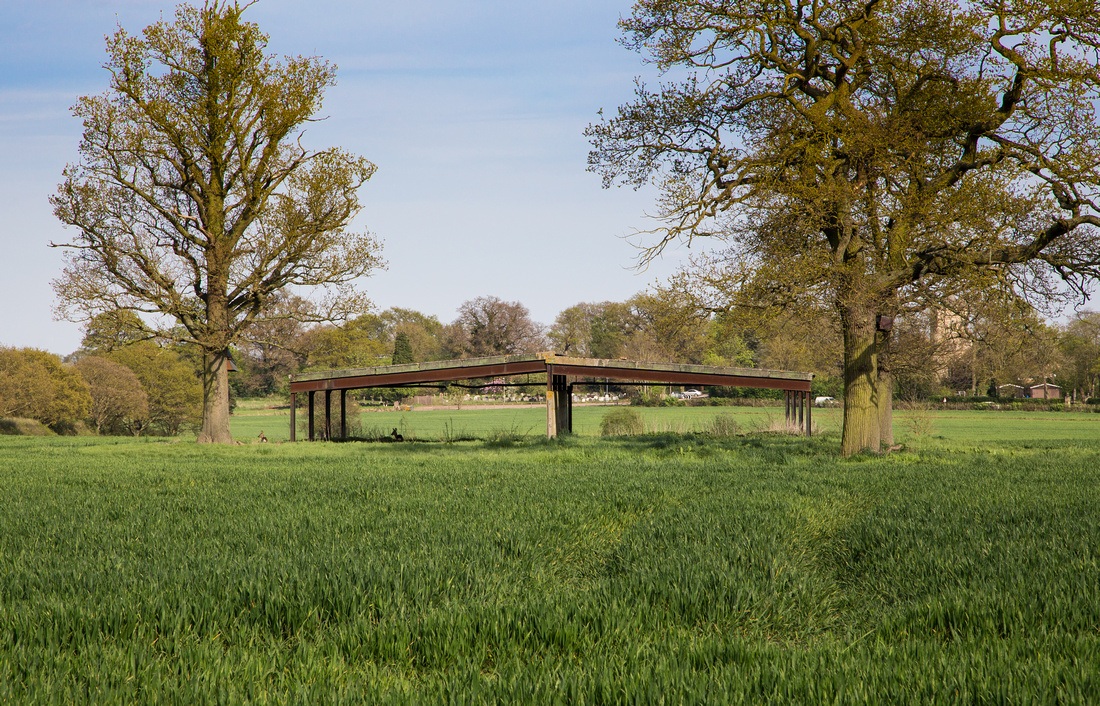 Pretty little falcons, kestrels, once very common indeed but now far less so – so I’m more than happy to drop little owls this year for a pair of dashing falcons – I may even get ‘round to filming these birds this year (rather than little owls) if they stick around.

The video below was shot about 5 years ago by me, and shows a female kestrel (perhaps the current bird) mobbing one of the adult little owls I was filming at the time, on top of the same cattle shelter. Watch the whole (very short!) video as I've slowed the last part down to 10% speed to clearly show viewers both the owl and falcon.

Back to the photo above that short video clip from five years ago and I'm sure the eagle (falcon?) eyed amongst you will have noticed two roe deer in the image - although you’ll now be hurt to hear that actually there are three deer in that shot and your eyes aren’t as good as you thought they were!

The roe deer are always around the 800 yards of ‘mac and I always enjoy gazing at them. I still think they’re the most beautiful wild mammal in Britain. It’ll only be a month or two and the deer will be dropping foals into long grass in fields near the 800 yards, after about 5 months of gestation.

The buzzards are still around the road too – picking off something tasty from the first few of the 800 yards in this video, shot a couple of days ago, from the car. 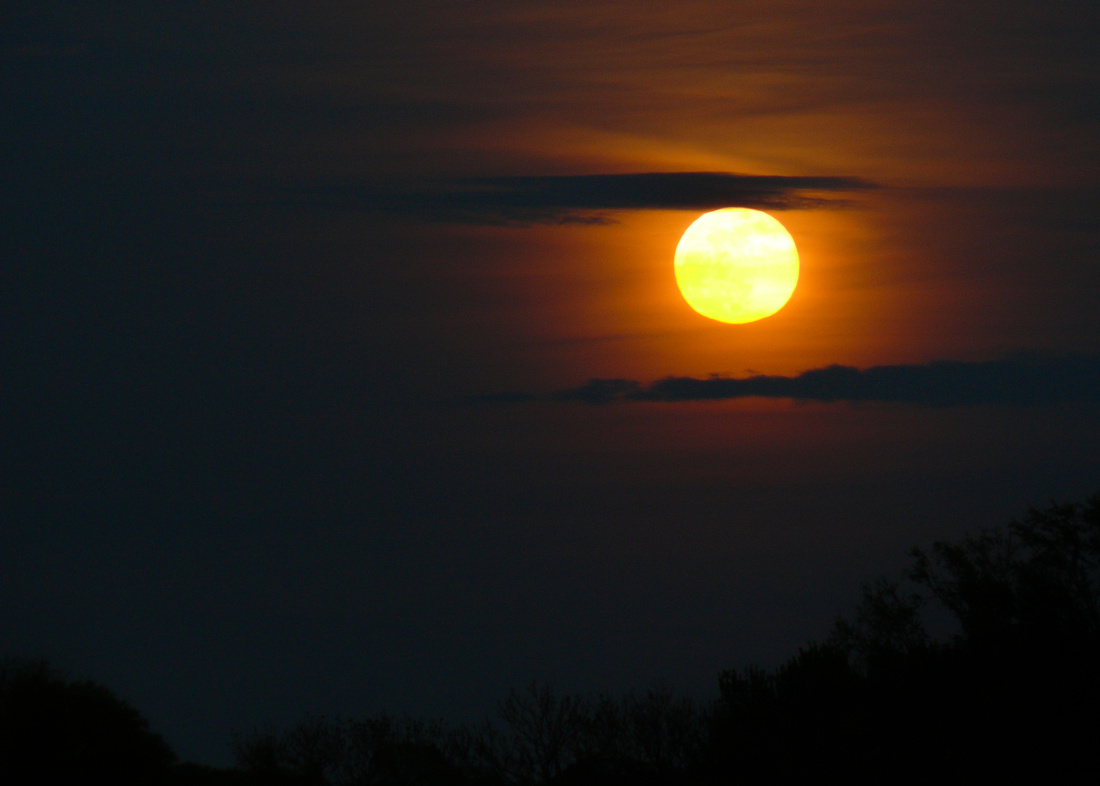 Other people call the April full moon the “egg moon” – for more obvious reasons and once again, along the 800 yards of ‘mac, in this month, life seems to be being re-born, everywhere I l peer.

Even the resident honeybee colony, which has been present in the same hole in the same tree along the 800 yards is being re-born at present. Not in the same knot-hole as they’ve been for the past five years, but now, weirdly, at the base of the same tree, in amongst the brambles. I can’t see an opening into this tree (which is FAR from dead) at the base of the tree, but I assume these bees have found one. I do hope they stick around, although I can’t help thinking they’ll move off when these very thick brambles grow and leaf properly, effectively making their entrance and exit flights from their tree-based colony far more difficult and energy-consuming. We’ll see.

Finally, in this April update, I’ve noticed several female toads on the move across the 800 yards of ‘mac, too. These will be the big females that have laid their strings of spawn in traditional breeding ponds in and lakes in March and are now hot-footing (well… crawling slowly) back to their woodland homes. (Toads are creatures of woodland really, not ponds). Do keep your eyes peeled for these lovely wee things – they may have done their bit for the circle of life, but it’d be a real shame to die on the way back to their wood, under one of your Bridgestones, eh?

OK, that’s all for April. I’ll try and establish whether we still have two barn owls in the stump, I’ll keep my eyes on the breeding kestrels, foaling-deer, nesting-buzzards and relocating-bees and catch you again for the May update of “800 yards…” in a month.

Before then 'though - and if I get 'round to it, I'd like to briefly blog twice - about nuthatches and the importance of listening when watching (or seeing!) birds and also a review of my new car (traditional on this errr... "wildlife blog" it seems).