The most beautiful wild mammal in Britain?

Regular readers of this blog will know I am besotted by swifts - and although I'd hardly describe them as beautiful (young, developing swifts are actually quite repulsive to look at for example), I do find them utterly fascinating - incredible little things.

But speaking of "beauty"... what would YOU say is the most beautiful wild animal in Britain?

Many might look to butterflies for their animalian beauty - peacock butterflies perhaps, or painted ladies?

Some might suggest the bright moths are the most beautiful animal in Britain - the shocking pink elephant  hawk moth  (my own photo) is very striking for sure, as are most of the larger, showier tiger moths perhaps.

My Uncle would probably suggest to me that the odonates (dragons and damsels) are the most beautiful, wonderful things in the British zoological list - they are wonderful for sure.... but beautiful? Nah.... not for me.

Other insects that some might consider beautiful might include the jewel wasps (my own photo) - they are certainly a spectacular (if tiny) sight to see.

How about some of our beautiful birds?  The kingfisher, song thrush, barn owl, jay, spotted woodpeckers? Some might suggest swans are our most beautiful birds (in their opinion), or perhaps yellow wagtails, mandarin ducks, bullfinches, goldfinches, blue tits or yellowhammers?

And what about out our amphibians? Do you consider toads to display a somewhat latent beauty or the lovely markings on the belly of a smooth newt to be your cup of tea?

How about our shy green lizards and striking snakes - do you think they are our most beautiful animals?

My guess is most people might choose a land-based colourful butterfly or bird when asked to quickly name a beautiful British animal, or maybe a furry mammal. 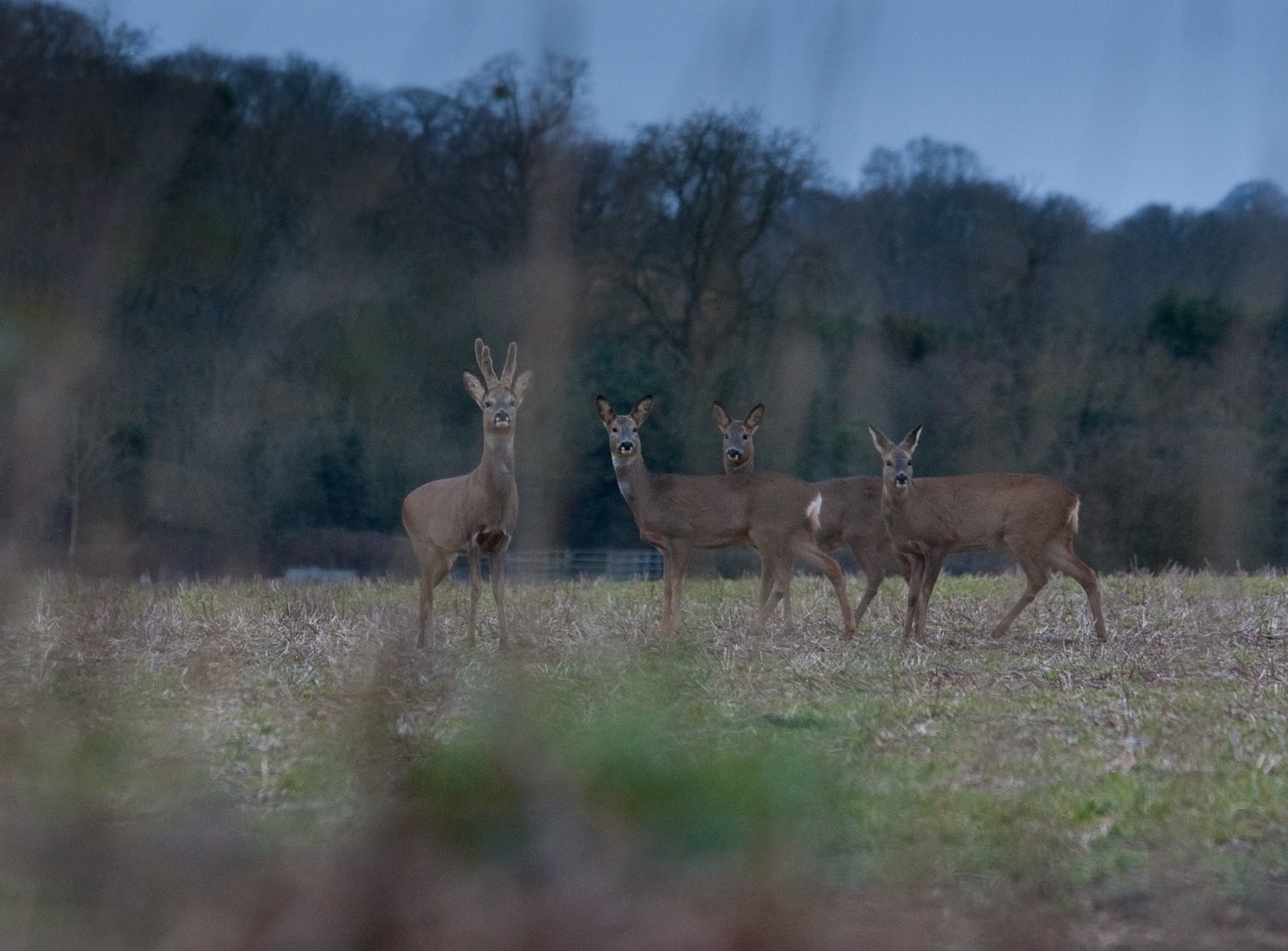 We have 6 (I think) species of deer in the UK, with only the roe and red being true natives.

I could take or leave most of our deer I think (including red deer - I just don't see the fascination with these animals), but roe deer.... they are truly something else in my opinion.

They are just perfect to me - so elegant, athletic and graceful.  Everything I'm not!

Perfect big, fluffy ears (thats more like me!), perfect black noses, such wonderful fur - I really love to see roe deer when I'm out and about.

So it was a sad morning this morning, when I caught sight of a pair of fluffy ear tips sticking up from a roadside ditch just before 6am this morning (in the headlamps - I have VERY good eyesight). I immediately realised this deer was not well.... sitting in a shallow ditch by a road - but I was on my way to check on the local barn owls - so vowed to return after the owls had roosted for the day.

Two hours later, return I did, and unfortunately did find the deer again, in the same ditch that she was in when I drove by two hours earlier. I assumed she had been hit by a car during the night and had hobbled into the ditch, whilst the other deer she almost certainly would have been with at the time, had left her.

It's always something of a dilemma for me, this sort of thing - wildlife rescue. Is it ever worth it? Perhaps I guess.... but probably not for deer - once a leg is broken, that's pretty-well that for the poor beast.

But this was a roe deer - the most beautiful mammal in Britain - I had to do something, even if it meant putting her out of her misery as quickly as possible....

So I called the RSPCA - who were (as usual.... I have no idea why many people dislike the RSPCA) very helpful indeed.

I looked at the beautiful (but very folorn now) doe roe and she looked back at me. I took a photo (maybe I shouldn't have) and retreated to my car to wait for the RSPCA officer. 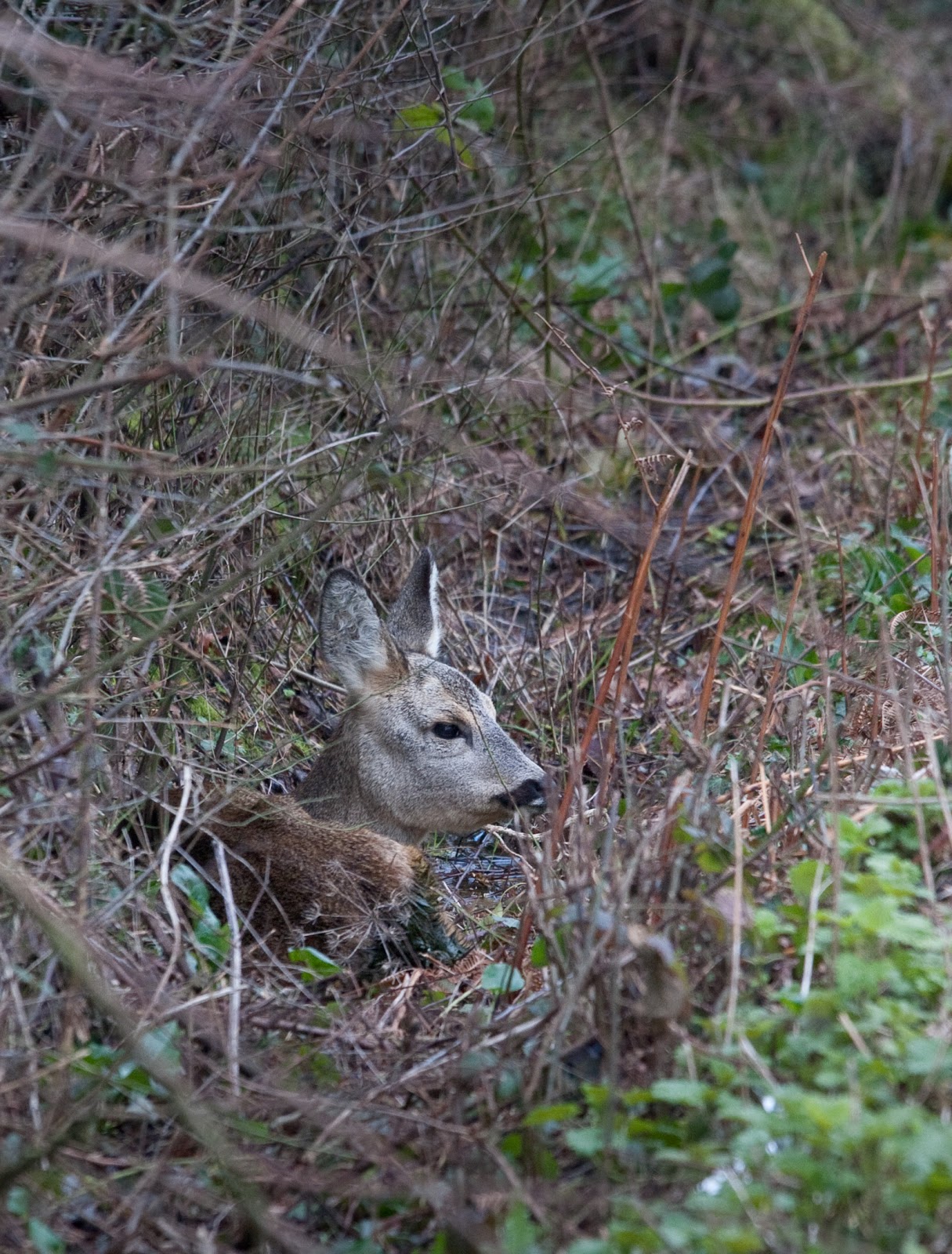 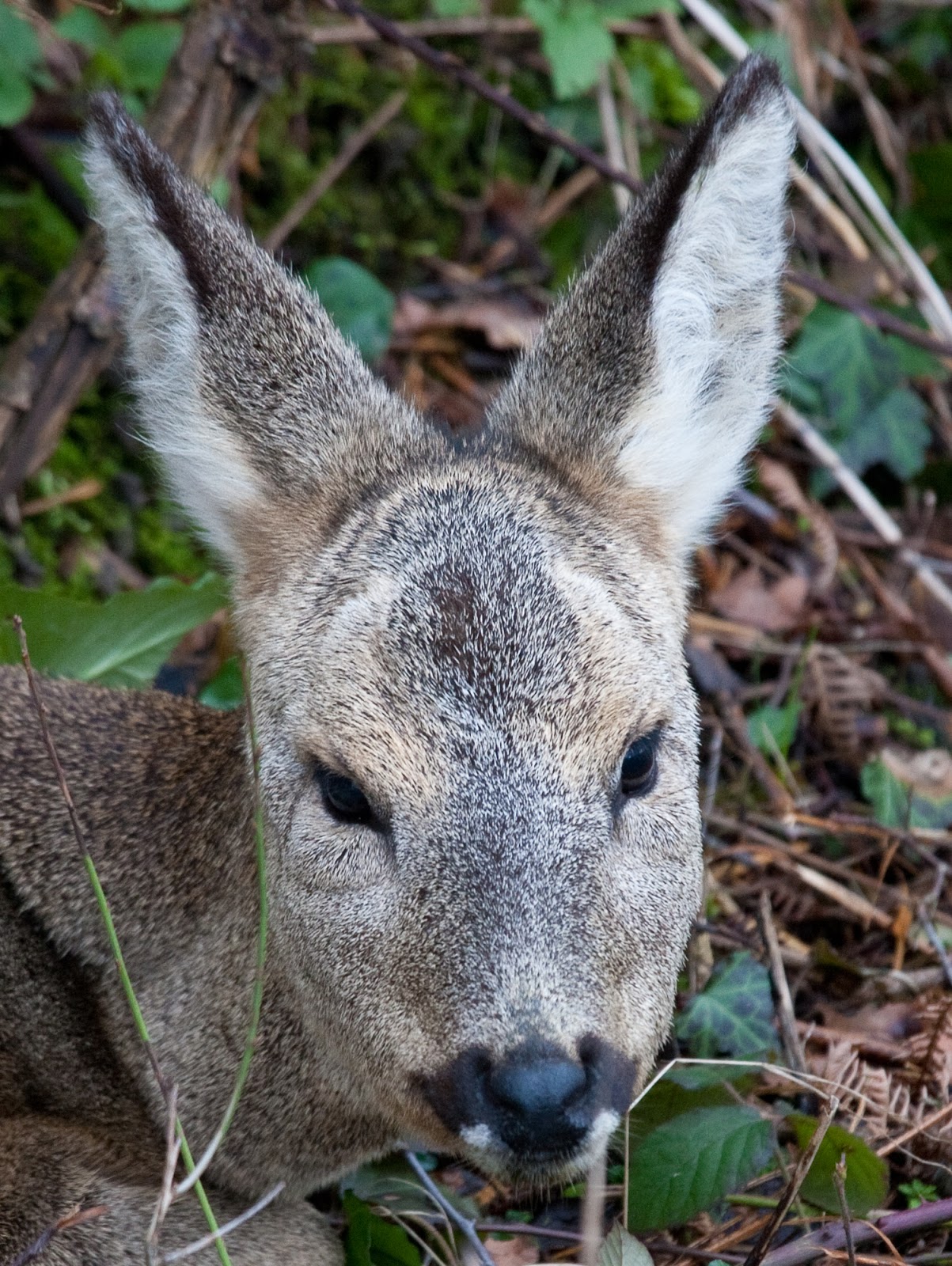 A little while later the officer turned up and we lifted the doe out of the ditch to check if anything could be done.

Even though the deer appeared unscathed at least "on top", the poor girl had a pretty smashed up rear (near side) leg, and was in a pretty bad way (stress, shock, call it what you want) and she was "humanely dispatched" by Phil, the very efficient RSPCA man with a bolt gun and a pithing rod.

Phil looked at me and said there was really nothing we could have done - and "was I ok"?

But I didn't tell Phil that I've always personally regarded these particular deer to be stupendously beautiful and it was a real shame to me.... a tragedy indeed that this particular doe had her life ended in such a manner.

We talked for a while about the area, the barn owls and the badgers and then I went home for breakfast and Phil went to another job a few miles away.

And the doe laid still now... back in the ditch.

I'm not often saddened by stuff like that.... but today was very sad indeed....

You know... there's to be a deer cull soon enough (backed by strong science) and whilst I'll not particularly miss the hundreds of muntjac round here, I do hope the cull doesnt take too many beautiful roe deer away from my dawn weekend wanderings....

The most beautiful mammal in Britain.