... since I saw my first two lucky ones over the garden, exactly three months ago to the day on May 2nd ... and they're still here... just. 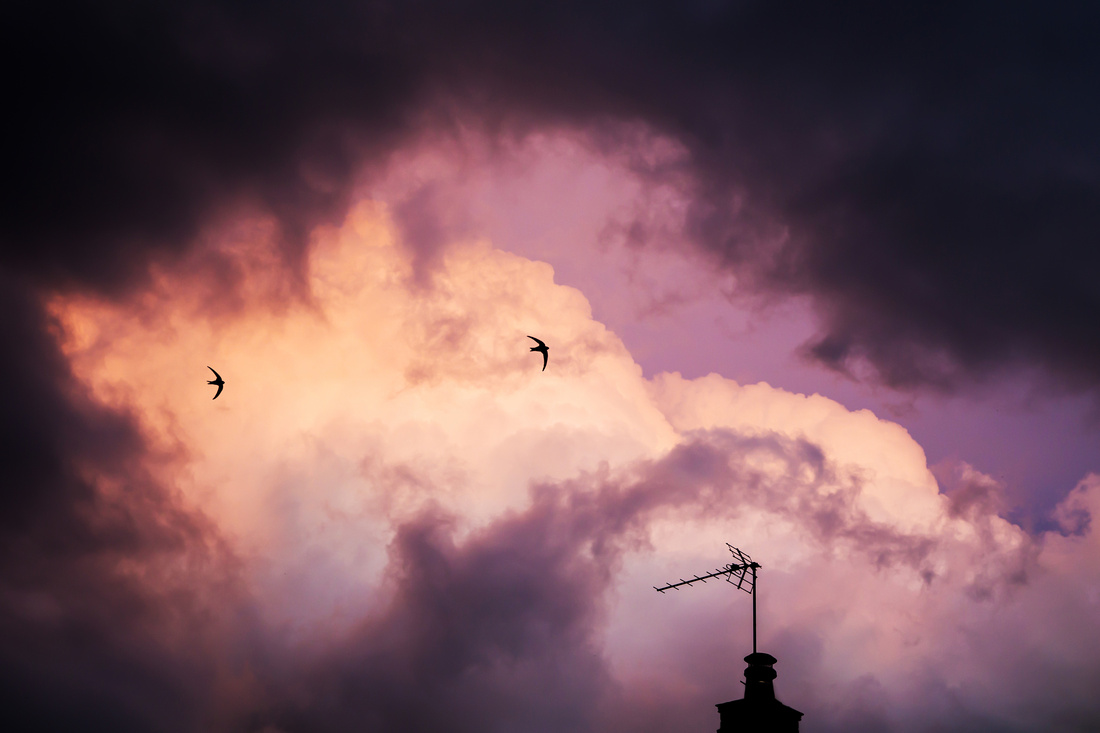 The photo above was taken by me (of course) last night, just before dusk. I see around a dozen or two each night in the hour between eight and nine pm. I need to say goodbye each time they leave, you know!

And they ARE going - we may well not make one hundred days.

It took them a month and ten days to start exploring the tunnel to our attic swift space this year (on 12th June) and as I said at the time, those would almost certainly have been two (or less likely three) year old birds prospecting for a year or two in advance.

We've seen swifts every day around the house or over the garden since May 2nd, but in contrast with last year, the season as a whole has been very disappointing to be honest. As far as I can tell, we've had NO visitors INSIDE our attic swift space, unlike last year, even if we've had a good two or three or four alight on and in the entrance tunnel to the attic swift space.

I had very high hopes that this year, our tenth (yes, tenth!) go at attracting my favourite birds (by far) back into our attic would finally produce the goods this year, but alas, those hopes were misplaced.

The weather didn't help to be honest (again unlike last year which was scorchio). We've had a pretty dreadful May, weather-wise... and I know that many swifts were either late back to their nest sites this year or didn't breed again because of the lack of half-decent weather and food therefore.

Swifts eventually had a reasonable year across the country, even if they were a little late off the mark. Much better than the swallows and house martins I hear which were VERY late back to nest sites, if they returned at all in some places.

On the upside, we've had the best part of a hundred days watching these magnificent wee beasties scream around our house in their chocolate brown racing colours and like the last year or two we've had them shout back at our MP4 calls all season and at least land at the entrance tunnel to our swift space.

We live in a post-war town and I'm far from convinced swifts have ever lived in any numbers in the area (unlike our place in Reading which was swift central it seems!).

We try again next year.

And we live in hope.

For now... I wish all the UK swifts good luck and very safe passage back to sub-Saharan Africa - and then even better luck on their return to our shores next April and May.

I will be waiting.