Many people (retailers generally) would try to have us believe that Christmas is "the most wonderful time of the year", but I'm afraid I've always disagreed. Christmas for me is the worst time of the year. Always has been. Well... since my late mother was  (typically, I'm afraid) kind enough to tell me on one Christmas eve in the early '80s (perhaps 1981, I can't quite remember) that she was splitting up from my father, who, at the time, I think, like most young boys, I probably worshipped.

Then of course, since the early '80s (for me at least) there has been the constant pressure to bankrupt oneself buying people expensive presents. I could tell you some (all-too-true) heart-breaking stories of (again my mother in particular) being pretty nasty to me on unwrapping her Christmas present from me - often bought with paper round money I'd earned for months.

Ready to swing from the nearest oak yet?

Well... this specific, current time of year for me runs Christmas a pretty close second, for being the worst time of the year.

The fourth week of July.

When my beautiful swifts abandon me.

I absolutely HATE it when the best birds of all leave our skies - skies that seem so noisily-full of life on one day in July can feel SO empty the next.

I'm reminded on these days (and evenings in particular) why swifts are so amazing - and to me at least, make all other birds look second or third rate.

To me, there are swifts. And then there are ALL other birds.

I try not to be too besotted or obsessed with any one thing in life - but I'm afraid that principle is shattered as far as I'm concerned, with swifts. I fully admit I'm completely besotted with these birds  - and I suffer for some time at the end of July, when I watch them (as I ALWAYS do) leave.

This year I became acutely aware that they were "orf" last Thursday evening, when the regular evening screaming laps around the house felt very different and brief and on Friday evening I watched dozens head south, high above the house, with only one or two low sorties and screams at our house.

My wife saw a swift yesterday and has done again today (I've been a little busy) and I'm sure I'll see a few before the first week of September (September 5th is the latest I've EVER seen one in Berkshire) but for now, around the house, the skies seem horribly empty - and will feel like that to me, until early May next year.

On the flip side though - and this large, black cloud does have a silver lining.... we've had the best year ever at new "Swift Half" for swift visits. Since late May and certainly early June we've had swifts visit the house every day, sometimes all day - and for the first season ever, we've had at least one swift actually enter and explore the attic roof space I've created for them and have been hoping to attract them to (to breed) for almost ten years now (as regular readers of this blog will appreciate).

I think those explorers were 2nd year birds so may (if they survive the trip to and from the Congo this and next year) do a dry-run nesting attempt next year with us if we're incredibly lucky - and if they manage that and survive another year, then (and only then) will they actually breed properly in our attic.

But... they may not survive that long. And they may have found somewhere else anyway. And remember, we had visitors to our attic space (or at least the tunnel TO our attic space) in the heatwave of 2018 too - and yet we had basically NOTHING last year. 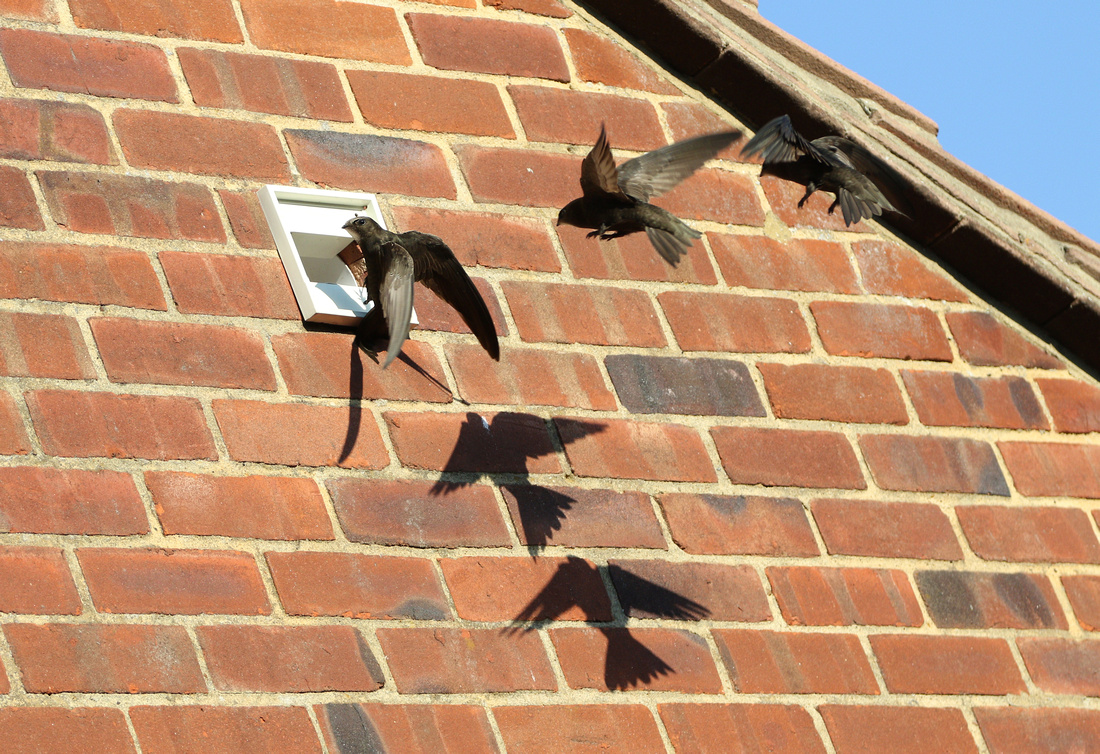 My hope has been reignited after this fantastic swift year here - and perhaps that is why I'm feeling even sadder than normal for the 4th week of July - because the skies around the house this year have indeed been so full and noisy (screams of up to half a dozen swifts for WEEKS now), that suddenly now, it really does feel so bloody quiet and empty.

Maybe it's that, as well as 2020 being just a bleeding awful year all round - what with CoVid19 and Brexit, not to mention the bleeding clowns in charge of our government at present.

Anna and I are SERIOUSLY considering our futures right now and whether we even HAVE a future in this shameful country of thick, selfish, deluded, arrogant, nasty, racist charlatans and liars. (NB - that's just England I'm talking about - not the UK as a whole).

I honestly wish that I could leave with the swifts right now!

This feeling won't last too long I'm sure. Well... I hope not. But right now, silly as it seems, I need to be kind to myself. In about two weeks I won't have smoked a cigarette in FOUR YEARS. And for the first time in years, I really missed sitting in the garden with a beer and a ciggy, toasting the departure of my swifts.

Oh look... I'm not going to take up smoking again and I'm not going to hit the bottle nor comfort eat (I've worked very hard and lost nearly five stone since January and am thoroughly enjoying being my old shape again) ...but I am going to make time to do a few things I enjoy over the next couple of weeks - just to get over this most acute of annual mental slumps, this particular year.

God speed to all the beautiful, amazing swifts leaving our shores now or very soon.

And I will see you again next May....

I took the photo below of our swifts leaving us last Thursday evening - you might also want to consider playing the YouTube clip below,

"Lucky ones by Luttrell (Leaving Laurel remix)" as this is the music I listen to when the swifts leave us.

It will also be the music I'll listen to when (and it will be a 'when', not an 'if') they return next May.

The lucky ones, that is.