C'mon baby. Do the loo commotion.

I did so (blog a reminder about "using your ears" in particular last April, when I explained in some detail how I manage to see so many goldcrests and kingfishers and bullfinches and nuthatches and SPARROWHAWKS compared to some - who lament that they never get to see any of the above.

To summarise that blog post - you WILL see these birds EVERYWHERE if you learn to use your ears first.... and only then, your eyes.

This morning I used my "ears" technique again - when sitting on the lav (I said sitting), reading a book (now that's a lovely image to give you as you consider what to eat at your next meal), I heard a commotion outside.

A commotion from the loo then.

Two (at least) magpies were kicking up a stink about something predatory outside in the garden.

Well. I finished what I was doing, and snuck outside to see if it was just a cat (probably!) that the magpies were shouting at.

A quick scan of our (large) garden provided the facts that a) the shouty magpies were in our huge leylandii and b) there was no cat around.

Now. Invariably when one asks oneself a question about wildlife (that is to say... WHAT is that x? when you can't actually see x) the answer is the obvious one. Or one of the most obvious ones.

For example, if you're walking through a wood in lowland, southern England and there's a rustle in the leaves under a tree or bush next to the path you're on... if you'd like to know what is producing that rustle - I can guarantee you that:

c.9% of the time its a shrew. (If you have hearing like me and the experience of being paid to actually catch shrews once, you'll know this to be true).

c.1% of the time its something else. Be that a pheasant or a muntjac or a fox or a woodmouse or something other.

Now I mention my rule-of-thumb above as I was again faced with the "what is x" in the garden this morning.

The magpies were shouting at something in our leylandii.

It's not nesting season, so it would be unlikely to be a cat in the tree, after a nest.

So the obvious answer here, a cat, was quickly ruled out. As was a fox.

The next most obvious answer by far round here is a hawk.

And only when that had been ruled out do we start to consider other things like stoat, or kite or peregrine or weasel or Tasmanian devil, or ghost, or the lorrrrrd jesus.

As I walked slowly up to the leylandii, firstly the two magpies kicking up the acoustic stink, exploded out of the tree like two ballistic football rattles.

I continued and invisible to me (on the other side of the thick leylandii) another big bird jumped out of the tree and flew away. I couldn't see what it was, but it didn't take me long to establish that, yes, it was indeed a sparrowhawk - and a male one at that - and a male sparrowhawk that had caught and killed a goldfinch  - but....  I saw neither the hawk nor the goldfinch.

So how did I know?

I found a few of these small feathers in the long weeds under the leylandii, almost hidden from view (luckily, one feather with a wet-with-blood-quill was caught in a cobweb, which I saw - which got me looking for more).

Now granted you need to know what bird these feathers come from to be able to immediately ID them as primaries and tail feathers from a goldfinch - but that's not hard with feathers like these. More dull brown feathers (from sparrows or dunnocks or robins etc) would be harder to ID of course.

OK. A goldfinch was being plucked in the leylandii in our back garden, by something that was being harassed by the local mafia magpies.

That would (of course) be a sparrowhawk then.

But how do I know it would be a make hawk?

Well... I don't know for sure, but again, as a good rule-of-thumb, your average small, pretty, orange-breasted and slate grey-backed male hawk will take small passerines like goldfinches, tits, robins, maybe a very small thrush - that sort of thing. Whereas your average big, dull, brown-breasted and brown-backed female hawk will prefer to take starlings as a minimum, or adult blackbirds and thrushes, or even (best of all) collared doves and woodpigeons. 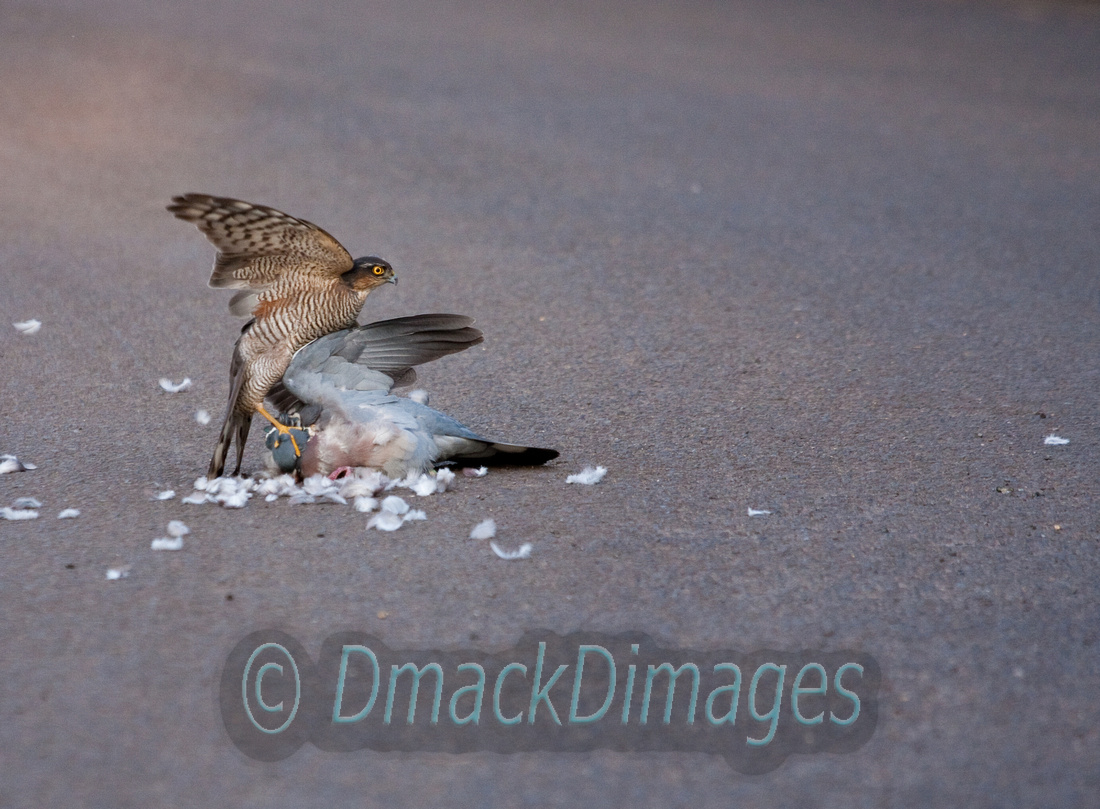 Huge odds-on (Ladbrokes would close the book on this) that my unseen avian predator that plucked this unfortunate goldfinch in our leylandii this morning was a sparrowhawk and 2/1 ON that it was a male hawk.

I may be "hyper-aware" (and I am  - it's quite exhausting for me and those around me sometimes!), and I may have a few decades of experience of this sort of thing behind me, but if I hadn't have heard (and listened to, i.e. processed that sound in my brain!) the magpies shouting outside whilst I was "at toilet" this morning and NOT gone to investigate, and not then found the few wee feathers hidden in the long weeds under the tree and before they blew away, I'd never have known a male hawk took a goldfinch in our garden this morning.

Use your ears first, grapple fans... and THEN your eyes.

No honestly. Away you go now.