This is the end. Beautiful friend(s). The end.

Unless you're a weatherman meteorologist trying to simplify the natural world for the thickos, you've not been in Autumn since September 1st.

Proper* (astronomical) Autumn doesn't begin until Sunday. This Sunday, that is. On 23rd September.

*OK. OK. For people (and there'll be a few) that regard me to be more than a little precious about this, Autumn for the Northern hemisphere, can only truly start when the sun, on its 'journey' from northern to southern hemisphere, lies directly above the equator each September.

Invariably this will be either the 22nd or 23rd of the month - this year the sun reaches this spot in the sky on the 23rd.

You can, if you like, have the Gregorian calendar months of June, July and August to be summer (and therefore for you, Autumn would begin as soon as September does), but in that case (and there's no polite way to write this), you'd simply (literally) be wrong.

Autumn only begins at approximately 3am on (this) Sunday morning.

And don't the beautiful hirundines seem to know it.

There was a STUPENDOUS spectacle of house martins over (west(ish)) Berkshire today. 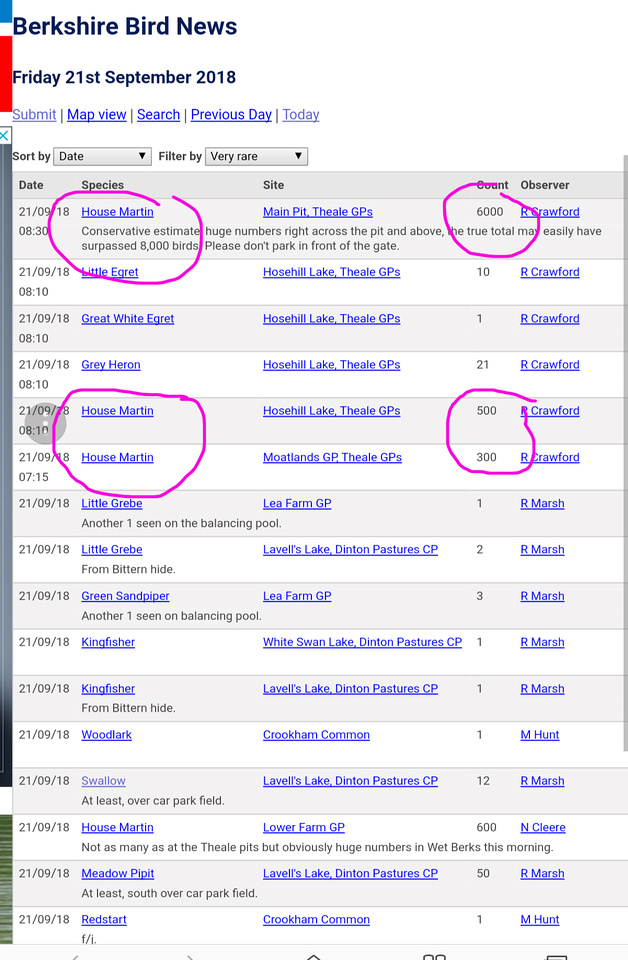 Perhaps as many as 8,000 house martins, feeding up over the Theale gravel pits (where I used to watch high peregrines on the pylons and listen to low nightingales in the shrub) today.

I was at work so didn't see this wonderful sight - but truth be told, it would have saddened me as much as impressed me if I had.

When my beautiful swifts just disappear overnight (in very late July normally - or perhaps August), I am very sad. I miss them awfully.

But when the swallows and house martins all form large migratory flocks during the day and then push obviously South en masse, I'm almost inconsolable.

Oh I knowwwww they'll be back fo-sho. And we have had a lovely summer, haven't we?

But even though the whistling wigeon and rattling fieldfare will try to cheer me up during the dark, cold months ahead... my mind will always be on the next equinox (March 20th in case you'd like to know), when Spring starts her engine and the beautiful hirundines start to return once more.