The former United Nations*cough* “Peacekeeper” *cough* and current (but for how long?) Conservative “Chief Whip”, Andrew Mitchell MP has (as you’ll know) created something of a storm in a teacup recently  (“Gategate”) when allegedly calling a Policeman a “f*cking pleb” at the gates of Downing Street.

On account of this, I thought I’d write about “plebs”…. Zoological plebs… but we’ll come onto that… grab a cup of tea and a penguin and take a seat.

He has since ‘apologised’ to the Policeman in question (the inverted commas are intentional) but always denied using the word “Pleb” itself.

What does Pleb mean anyway and why (if a Tory MP uses the word publicly), might its use jeopardise their position in the Government?

I used to use the word “Pleb” all the time.

I had a free education, albeit at a (privileged?) Grammar School after taking the twelve plus exam in Buckinghamshire.

As Grammar schools went, my secondary school had something of a rough-tough reputation and was mainly metalwork, woodwork and football orientated.

We didn’t study Latin or Greek and I was the only one to vote for Classical history when we selected what period of history we’d like to study for our ‘O’ level. (We ended up studying the “Repeal of the Corn Laws” and ‘Splendid isolation” which I begrudgingly trudged through wearily).

Yet… if my friends did something wrong in my eyes, I’d call them a “Pleb”, without thinking. I’d often call them something else far more offensive (which I won’t type here but if you grew up in the 70s and 80’s you’ll know which words I mean).

I was also called a “Pleb” many times by my friends, or often something far worse!

“Pleb” was the least offensive of all our schoolboy cusses. I don’t think any of us actually knew what it meant at the time. (We should have studied Classics after all, eh?)

The shortened word “Pleb” is derived from the Classical Roman “Plebeian”.

Classical Rome was basically divided into the Patricians (the ruling elite) and the Plebeians (the non aristocrats).

In Roman times the Plebeians were not without power –many became wealthy and influential, but I guess they were always looked down on by the Patricians.

These days (certainly when I was at school), “Pleb” meant “div”.

Incidentally… do you know where the term “div” or “divvy” originated from? It was UK prison slang for the slowest of the inmates, whose day job it was to put cardboard dividers into boxes. They were the “divvies”.

No-one took offence to it and I meant no real offence by saying it. “Pleb” was used by us all at school and we left it at the school gates when we left after our ‘A’levels.

Or at least most of us schoolboys did.

I guess some didn’t.

The Rugby School (a very posh fee-paying Independent School for any Americans reading this) boys obviously took the word with them when they swanned off to Oxbridge.

You get the distinct impression that the current Tory Government is stuffed full of wealthy, arrogant public schoolboys who know exactly what the word “Pleb” actually means (or meant) and consider many of us as the lower classes – the commoners, the people without an expensive upbringing … the “Plebs”.

That is why a Tory MP calling someone a “Pleb” is a bit of a dumb thing to do really. Conservatives are desperate to throw off their elitist image and a public outburst like that puts them back decades.

Wellll…. I don’t know if Andrew Mitchell used the word at all, let alone deliberately.

I don’t know if he lied about it afterwards or whether he knew what the word actually means (or meant).

I don’t really care that much.

It got me thinking though.

I know of one (and only one) British animal with a Latin name of “Plebejus”  (or these days “Plebeius”) named after the Plebeians of ancient Rome.

The only one I know about is Plebeius argus.

(There are other zoological “Plebs” in other parts of the world, but I know of only the above in the UK).

Plebejus was the (generic) name Jan Krzysztof Kluk gave to a quite beautiful blue butterfly which is quite rare (or very localised anyway) these days in the UK.

We call it the “Silver-studded blue”, although it was for some time called the “Lead blue” as the male’s wings were more of a gun metal sorta blue than many of its more vivid bluey, “gossamer-winged” or Lycaenidae cousins.

This summer I was lucky enough to watch my first "British Pleb" (Silver studded blue) on a local lowland heath (on which they flourish) and quite a beautiful butterfly it was too.

Why did Kluk (and then William Kirby) call this genus of blue butterflies “Plebejus” or “Plebeius”?

I have no idea to be honest. (I’m not sure there is another genus named after the “Patricians” of Rome for example).

But these blue, gossamer-winged butterflies are found all over Europe, “Plebs” they are and “Plebs” they may well be for some time.

OK. You now know where the generic name stemmed from – but what about the specific name - Argus.

I’ll cut a long story as short as I can here as I’ve already waffled on for too long today.

In classical Greek myth, Zeus had taken quite a fancy to a daughter of King Inachus, the nymph Io – and wanted to indulge in a spot of carnal passion with her.

On realising that his wife Hera had become suspicious of his errr… extra marital interests, Zeus immediately changed the river King’s nymph-daughter Io into a white heifer.

Hera was not fooled – she immediately demanded the heifer (Io) as a gift and charged the “all-seeing” hundred-eyed giant Argus Panoptes to keep his eye(s!) on her and let her know if Zeus turned up.

Eventually Argus was slain by Hermes (at the request of Zeus) but Hera placed the giant’s hundred eyes on the tail of her sacred bird – the peacock as an act of commemoration for the all-seeing giant’s service to her.

The peacock to this verrrry day (boys and girls) has a tail which is adorned with the eyes of Argus.

Incidentally, the above story will also explain the scientific name for the peacock butterfly – Inachis io. (named after the river king and his nymph-daughter which Argus’ eyes protected).

Why does the “Silver studded blue” have argus as its specific name?

Several “blues” have links with argus.

Look at many of our blue  butterflies (and argus’) underwings and you’ll see Argus’ all-seeing hundred eyes, rather like the peacock’s tail. 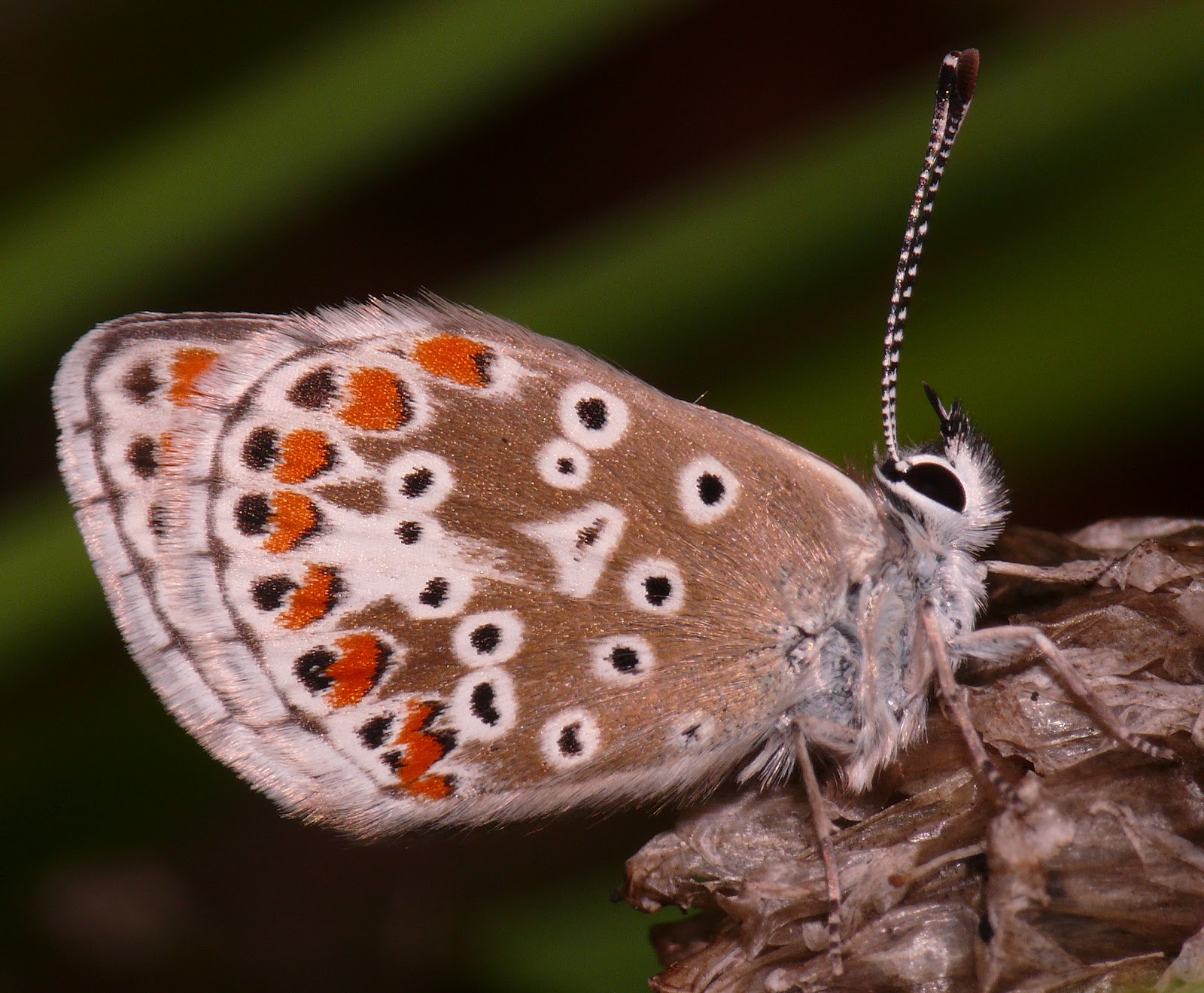 Why is the giant retailer “Argos” named after the all-seeing giant Argu(o)s panoptes?

Purely because Richard Tompkins (the founder) came up with the idea whilst on holiday in Argos, Greece…  and these days “Argos” is an ummmm… all-selling giant rather than an all-seeing giant.

Anyyywaaay …. To briefly return to (and end on) Andrew Mitchell’s alleged tyrade against the “plebeian” Police officer a few days ago.

If I was the Police officer at the gates Downing street who Andrew Mitchell had called a “F*cking pleb”, I might looked down at my blue uniform (complete with silver buttons) and have quipped back to theWhip :

“Sir. When you say ‘Pleb’, I trust you are cleverly comparing me to our very own Plebeius argus. The all-seeing silver-studded blue butterfly – in which case I will take that as a mighty compliment indeed”….

“Now gerrof your bike Patricia; and walk through the other gate like every other f*cker has to do”…