I'm pretty sure I heard a redwing "tseeping" overhead at night on the 26th September. If that is indeed the case, that will be my first September redwing ever - arriving less than a week after summer has officially ended.

But if that isn't the case (I must have misheard a "tseep" in the night sky I guess), they certainly started to arrive (and "tseep" above me in the night sky) in earnest yesterday.

It's almost always the second week of October when I hear my first winter thrushes arrive (invariably the redwings, followed by the fieldfares a fortnight or so later.

I'll not write about the larger, bolder fieldfares just yet (I may do so when they arrive) but I will briefly mention the smaller redwing.

As I've mentioned earlier, I tend to hear my first redwing of the winter in the second week of October.

They start to arrive en masse around then, most often coming from Scandanavia, where they've bred earlier in the year (quite often on the ground or in a very low bush).

The first you'll notice of them is their migration call - a thin "tseep" made in the sky at night, to keep track of each other. When you hear your first thin "tseep" high above you overhead, you'll KEEP hearing it (whether you like it or not) until April(ish).

You can then proceed to bore your friends and family rigid and tell them that the bird you all heard has just flown in from Scandanavia (or Iceland if you live on the extreme west coast of England). They'll probably pretend to be bored but secretly wonder how on earth you know that -froma  thin "tseep" in the night sky.

You know that because nothing else makes that sound after dark at this time of year.

Oh surrre..... some of our waterbirds and waders (grebes, woodcock etc...) fly after dark, but they don't sound all "tseepy" like the redwing do...

The redwing's scientific name is Turdus (thrush) iliacus (flanked) which I guess is pretty apt.

The red (burnt thick marmalade) colour extends right under their wings however. In actual fact the "under-arms" of a thrush is a very good way of telling one species from another if they're flying and silent... 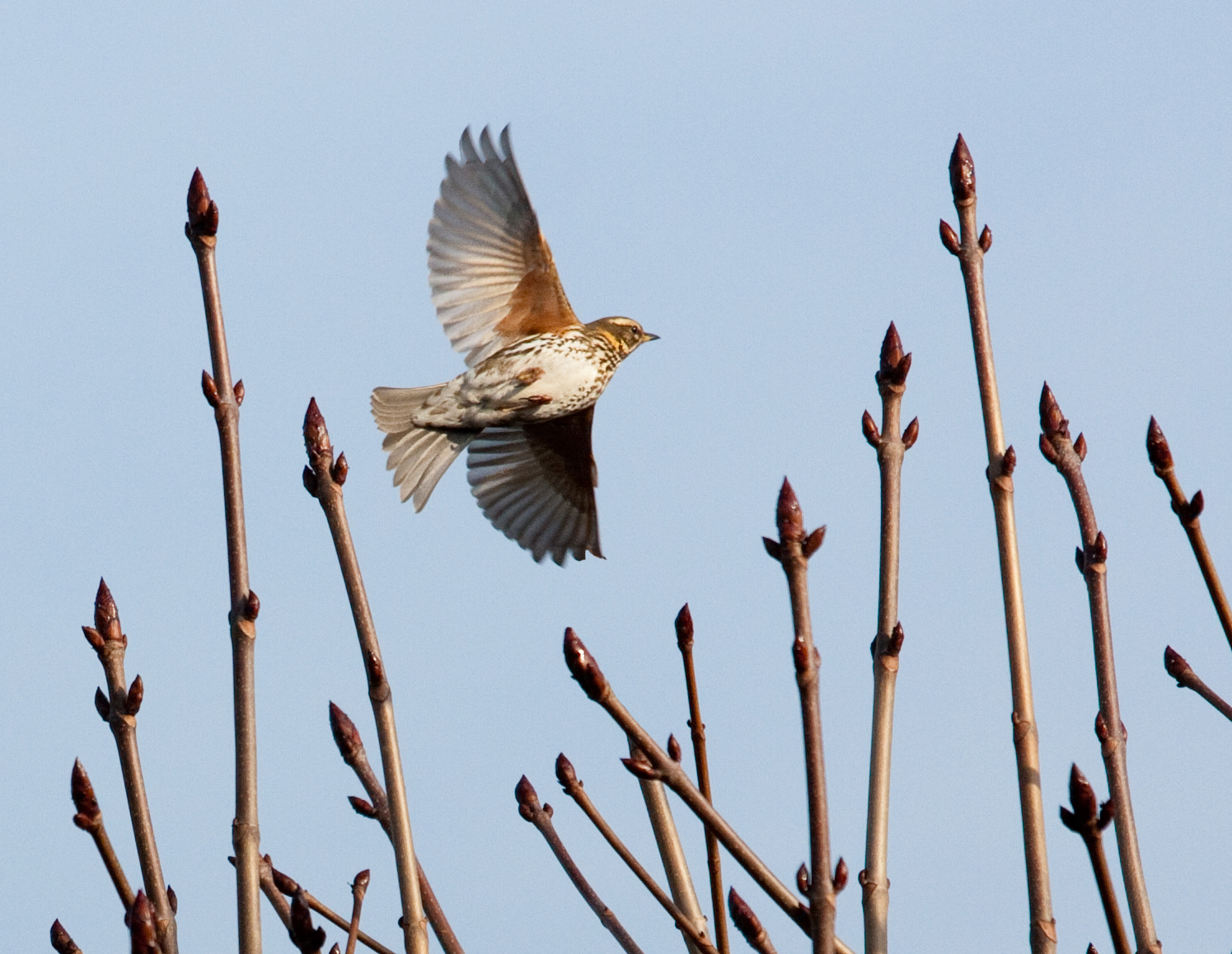 There are better ways of ID'ing thrush spp in the air, but if you have an ipod in your ears (and you can't hear them) - the above is a good rule of thumb.

Looks like I was the first to report these pretty-little thrushes this year in Berkshire (I managed to beat the retired gentlemen of leisure who do now else but "bird" it seems) and I will probably hear redwing until the first week of April - potentially two weeks after the fieldfares have gone.

So... thats the thushes part of the blog post title out of the way (redwings are arriving NOW and fieldfares will do so in a few days)

What about the hog?

First the good news - our hedgehog seems intent on spending each day in the hibernaculum Anna and I hastily erected for it. This can be verified by the fact that each morning between about 0330hrs and 0430hrs, the lil beggar shuffles into the box - only to re-emerge after the sun has gone down (between 1800 and 2000hrs). I know all this because the owl bushnell is at present trained on the hedgehog home.

Now the bad news - the trailcam picking up the hog's movements each night emits IR light from its LEDs. These make nocturnal creatures' eyes shine like lamps on videoclips - including our cats eyes, little owl eyes, fox eyes and of course, hedgehog eyes.

Well.... it would..... normally..... but its clear from watching the footage of our hedgehog that I've managed to record that our hog has only one good (shining) eye - its right eye. The left eye is dull as dishwater.

It shouldn't bother the hog - even at the best of times they have dreadful eyesight.

Ok... that's thrushes and hogs out of the way. But what about the jays?

As described last week, there is DEFINITELY a jay eruptive migration occurring over the UK at present -especially the eastern side of England.

Sure... at this time of year we will all see more jays than in the summer as they carry out many caching missions (burying acorns for winter storage) but last week a flock of over 650 was seen flying off the north sea over Norfolk.

Beautiful birds... and of course I provide them with monkey nuts each day in the garden! (Sometimes these fall to the magpies, but I can't win 'em all).

Sorry this week's report is a bit patchy - I'll try and do better next time...