Without (much!) warning, we’re almost halfway through the year then… May always acts as a reminder to me to make sure I make time to really smell the flowers along the metaphorical and literal path each year – May is where the wildlife really kicks into top gear after all.

I’m not going to pretend that this particular blog post is much of a well-structured and focused piece – it instead will reflect the veritable plethora of all life  (wildlife I mean) that has hit me in the chops during what was my late mother’s favourite month of the year (and I can see why).

OK then… where to start? I guess on the 1st day of the month?

On the 1st, we took a wee family trip to a local childrens' farm and play park ("Jake's") and on walking through reception out into the farm beyond, I immediately noticed a pair of wagtails taking what looked like dragonflies (surely too early?!) to a nest in the corner of a farm outbuilding.

Now I LOVE wagtails. They would certainly appear in my top ten (perhaps five even) birds list. Yes... if I was ever invited to give my five favourite birds on the excellent "Golden Grenades" podcast, I'd have Pied Wagtails at number 3, with the other species being 1 - swifts of course, 2 - nightjars, 3 - pied wagtails, 4 - song thrushes and probably 5 - ospreys.

That said, I didn't bring my camera (other than my phone) to Jake's playworld, so didn't get any decent photos at all of the busy wagtail parents - just a a couple of the nest and building the nest was in. 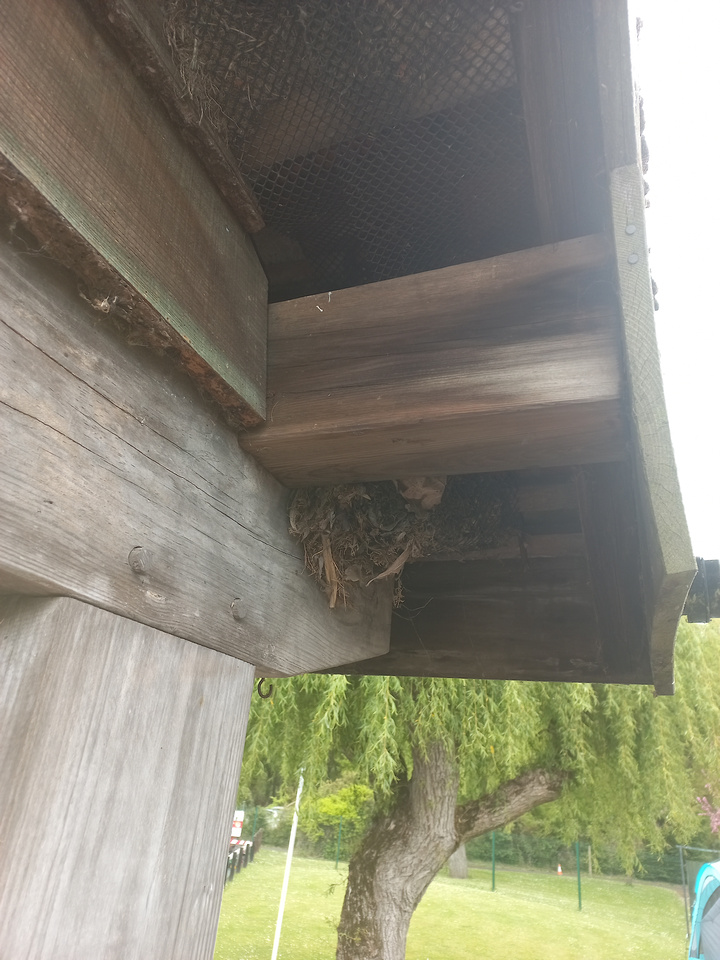 Talking of wagtails, closer to home I was also being treated to the VERY loud mating calls of a grey wagtail setting up shop under a bridge which crossed our local river ("The Cut"). I never knew wagtails (specifically grey wagtails in this case) were so loud. Lovely to hear (and to see!).

The  bird month had started very nicely thankyou very much then... but on the 5th... that was going to turn a little sour when the neighbour's starling nest was raided by a magpie. One unfortunate starling had clambered OUT from its relatively safe position in the nest under the eaves, and become stranded and exposed in the gutter. A week or so out of the egg, it was too young and weak to clamber BACK into the nest and was pretty expertly snatched by one of the very beautiful (but deadly) local magpies.  I photographed it of course, those of a sensitive disposition might want to quickly scroll through the next few photos without looking too closely... 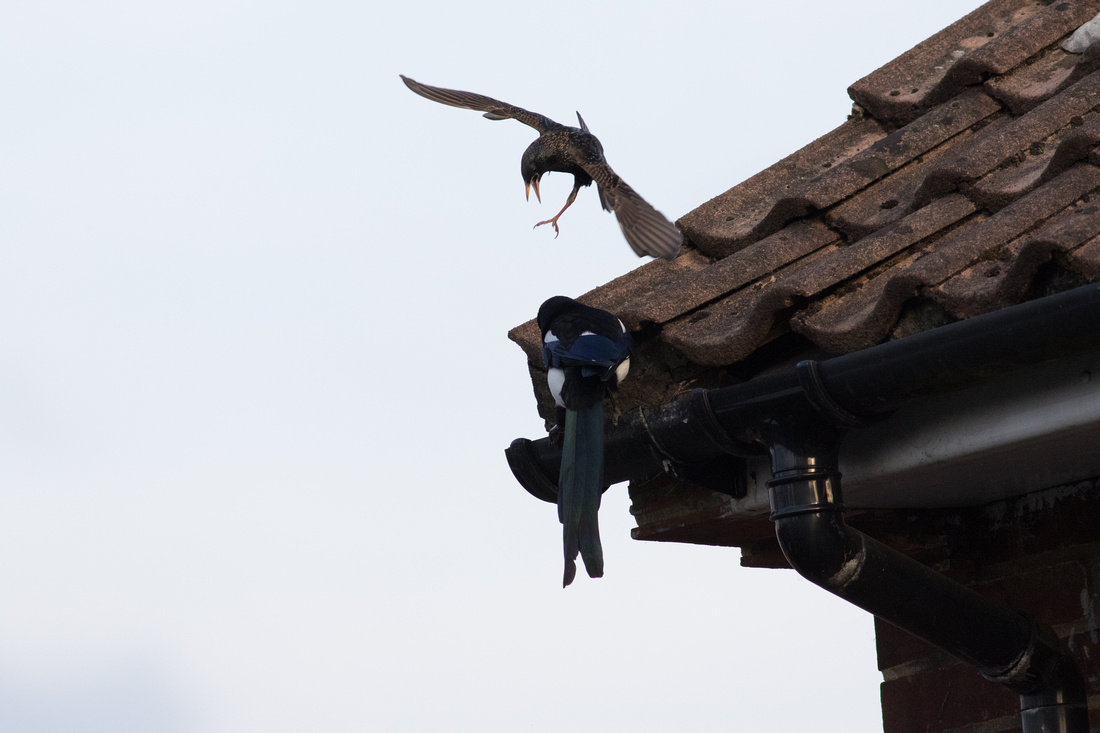 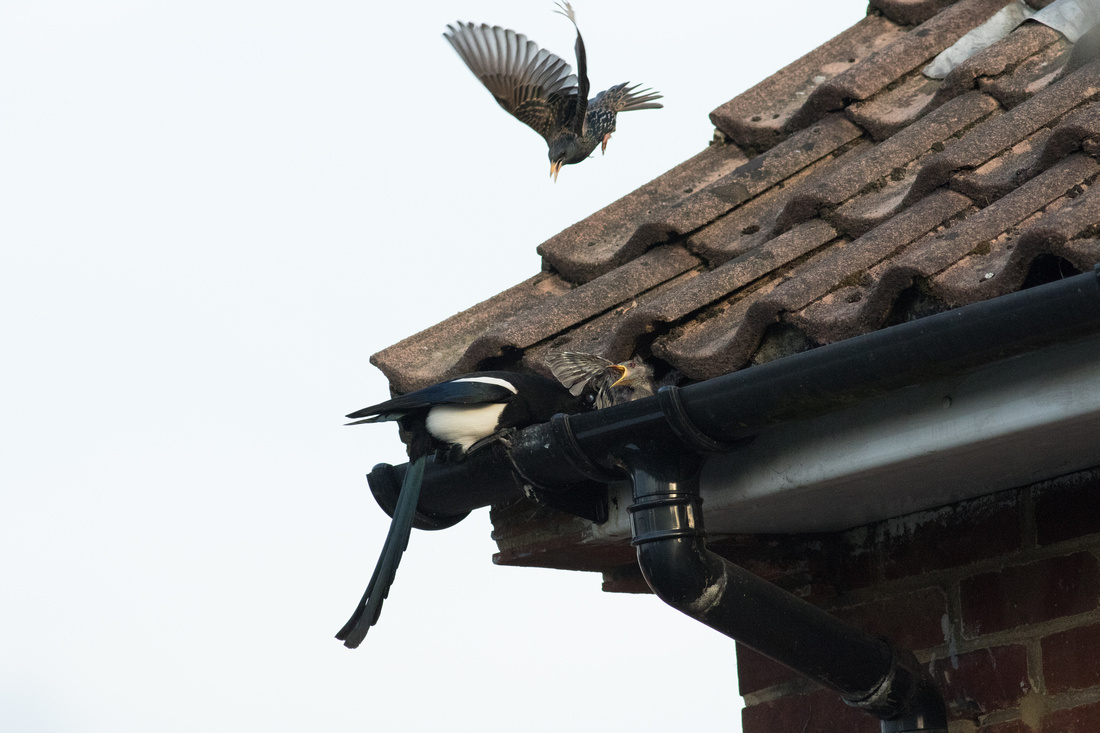 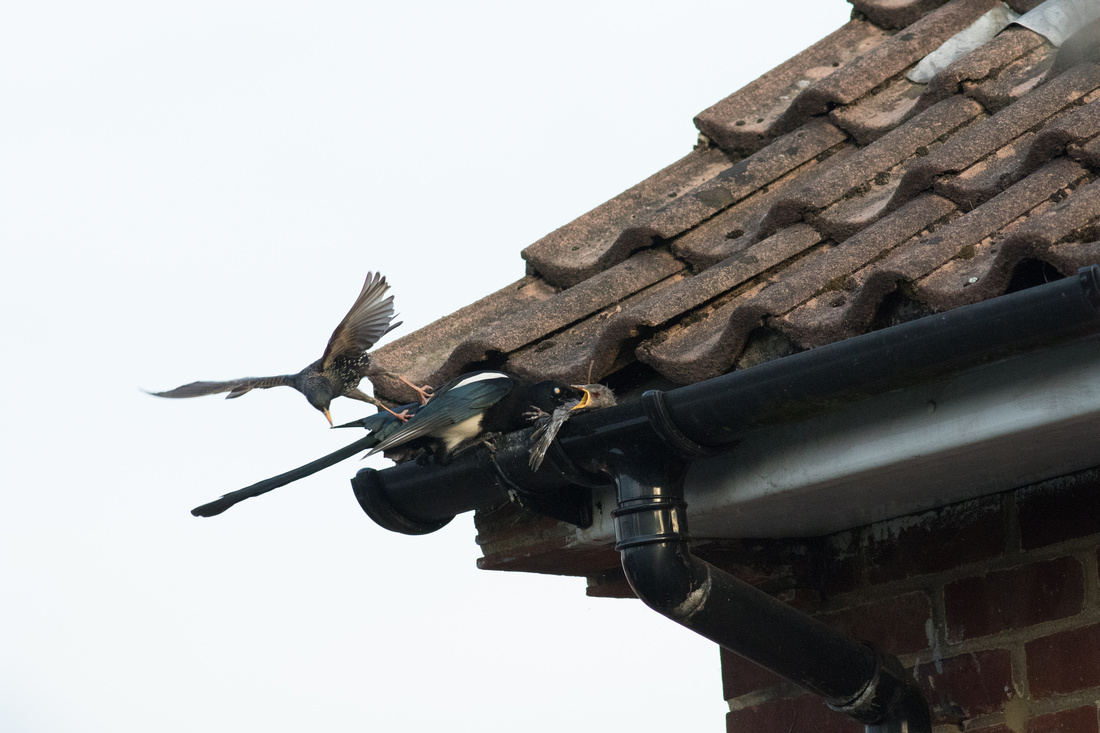 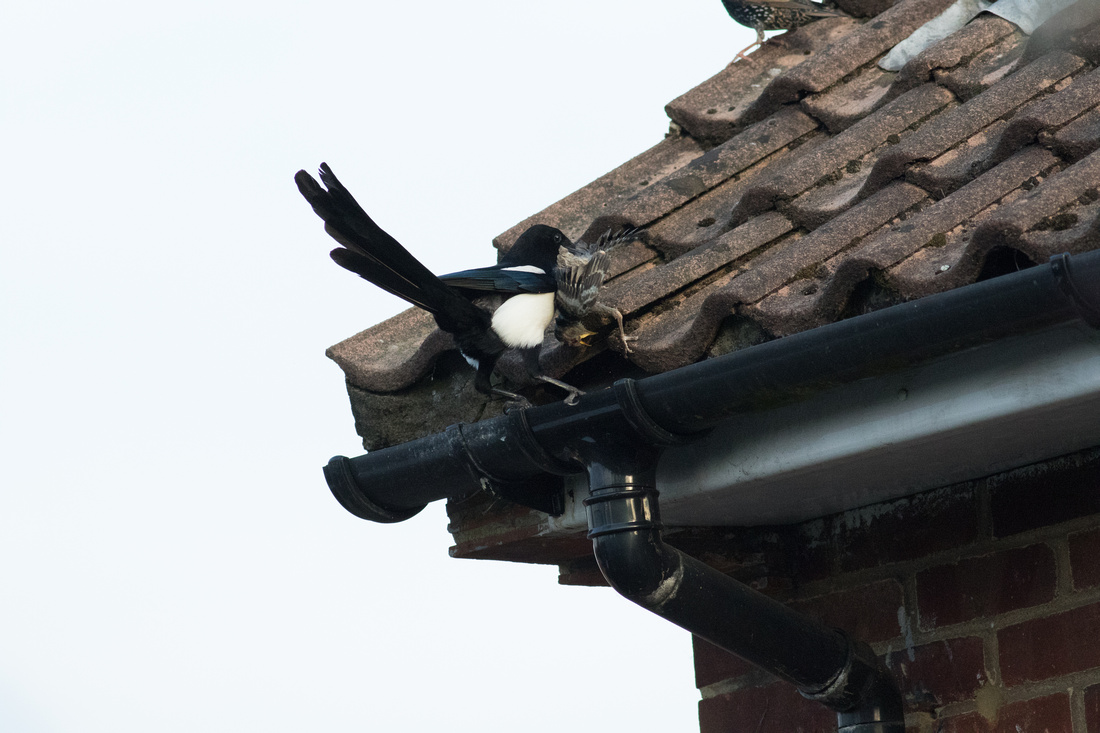 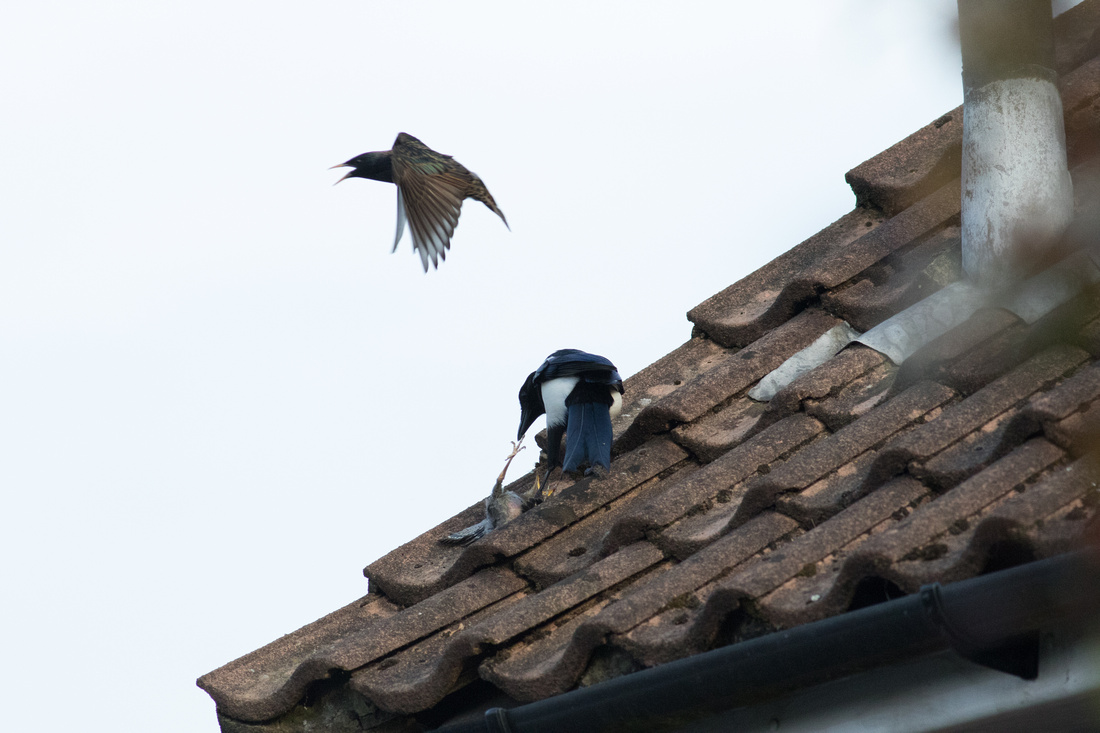 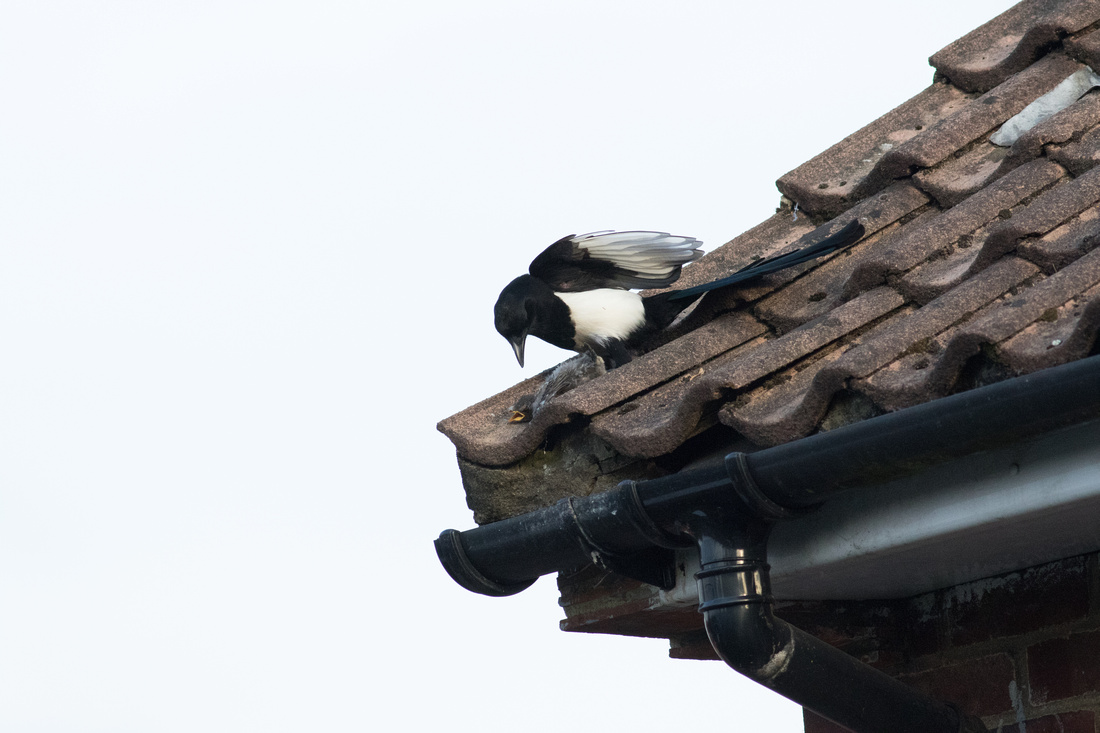 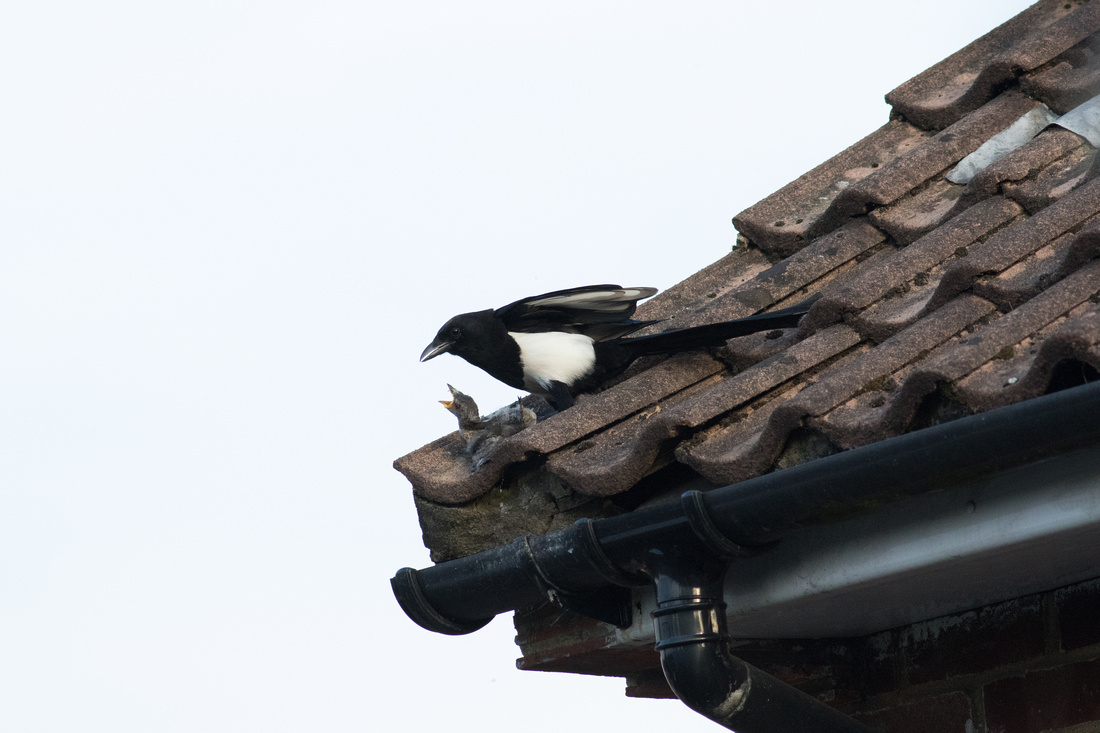 On the 7th May, Ben and I took a walk around a set of local gravel pits and not only did we see little ringed plovers, but we were also treated to the always wonderful sight (and sound) of our first party of swifts of 2022. We were wandering down a woodland path and I suddenly stopped and said: "Listen!". On hearing my favourite avian sound, swifts screaming in full attack mode, we looked up, through a gap in the tree canopy and saw them! Five sooty brown bow-and arrows in the air. Zipping about. Screaming. WHAT A RELIEF! WHAT A JOY! It would be two more days before we saw them around the house - but there you have it - May 7th was the first day of 2022 we saw my favourite bird back with us after nine long months away! 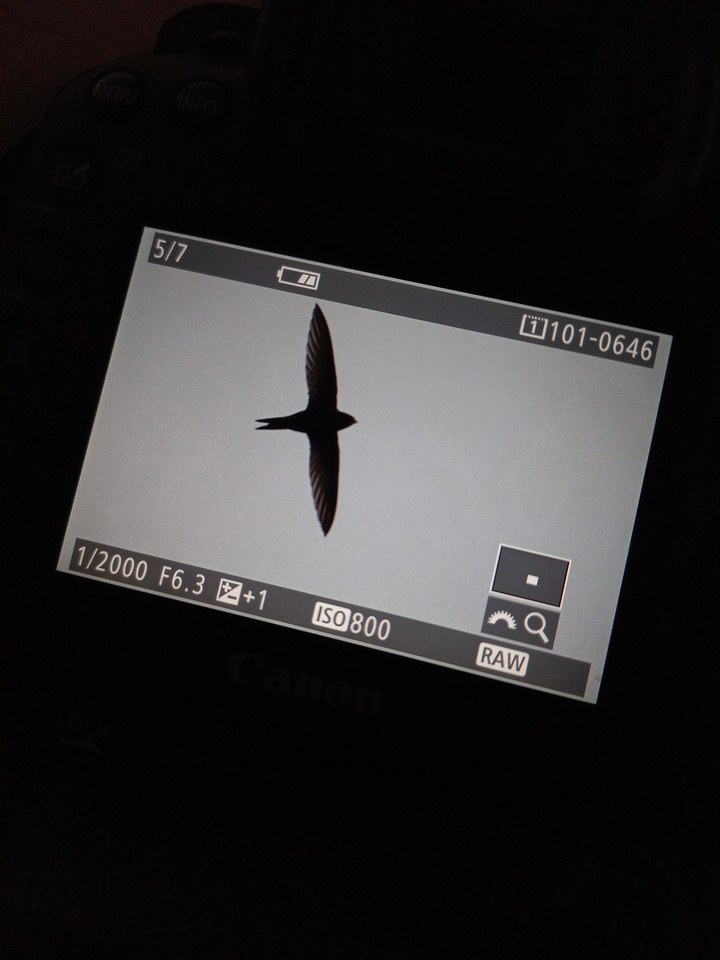 Also on the night of the 7th May, I set our moth trap in the back garden for the first time in 2022. Not much to report on checking it on the morning of the 8th to be honest, other than one brimstone moth and EIGHT cockchafers. Well... they are known as Maybugs after all, so I guess that fits!

Regular readers of this blog will possibly appreciate that I don't tend to bang on about what the weather was like from month to month here. Other wildlife bloggers do that and to be honest, I find reading all those weather notes incredibly tedious. I KNOW what the weather was like last month, as do you, dear reader(s) (but you WON'T know what wildlife I saw last month, which is why, I presume, you flock here in your thousands (of cells)).

That said, I will this month give a brief nod to the weather in this particular blog post. April was VERY dry across much of England and it wasn't until the 11th of May that we got any appreciable rain here for WEEKS. After the first day, on the 11th, of proper rain for perhaps over a month here in SE England, the weather warmed up a little and in came the swifts in larger and larger numbers. But (and this is a rare thing for me) I hadn't seen ANY house nor sand martins by that time. Very worrying - more on that later. 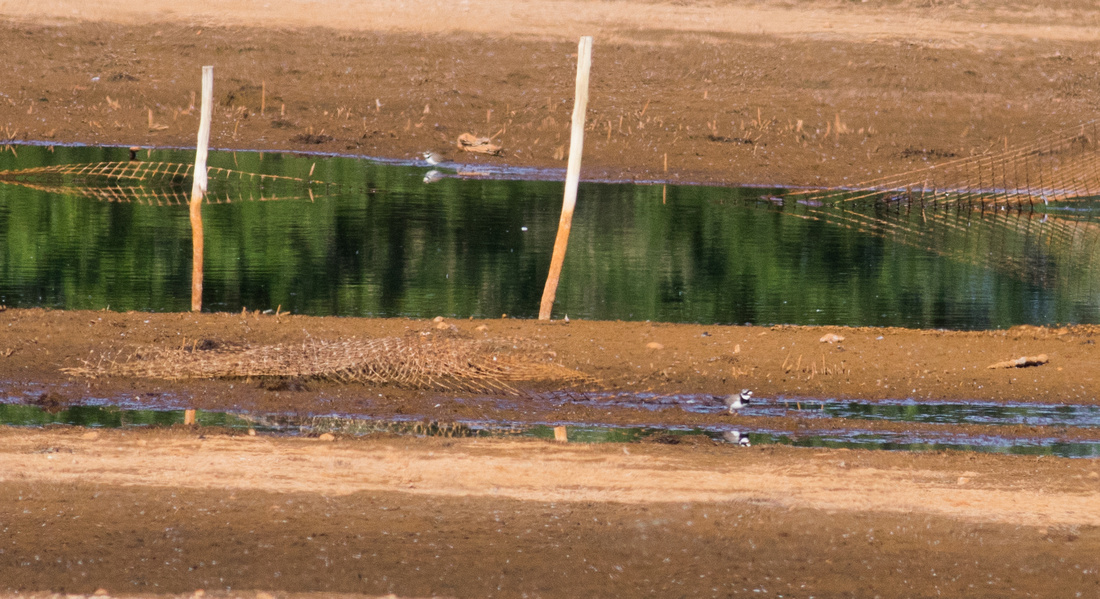 The rains of the 11th in particular really jump-started the flowers and plants in May (they'd all been pretty quiet - dormant even with the lack of water in the soil until mid May) and on the 17th, the yellow-flag irises around our pond started to flower. Two flowers at first but by the end of the month we'd have three dozen or so - our pond, it has to be said, has been a spectacular success in our garden. 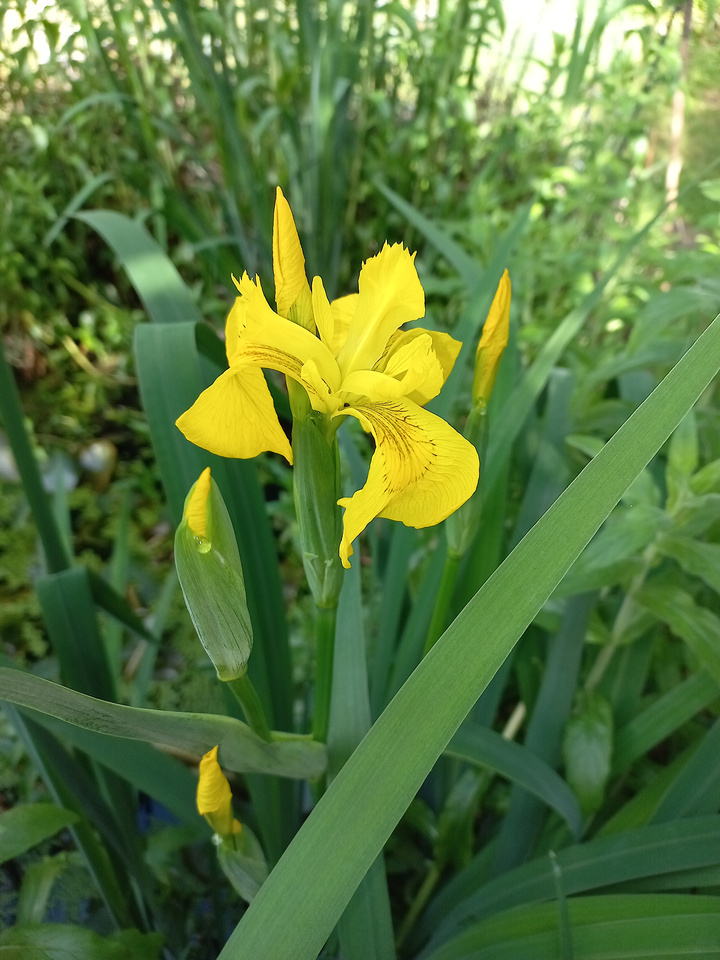 On the 20th of May, I set our moth trap again, having heard that in the previous few nights, the southerly winds had brought with them an influx of rare striped hawkmoths to southern counties of England. Well... we got no striped hawkmoths... but we did get a brilliant poplar kitten (photos below) instead - a lovely thing indeed. 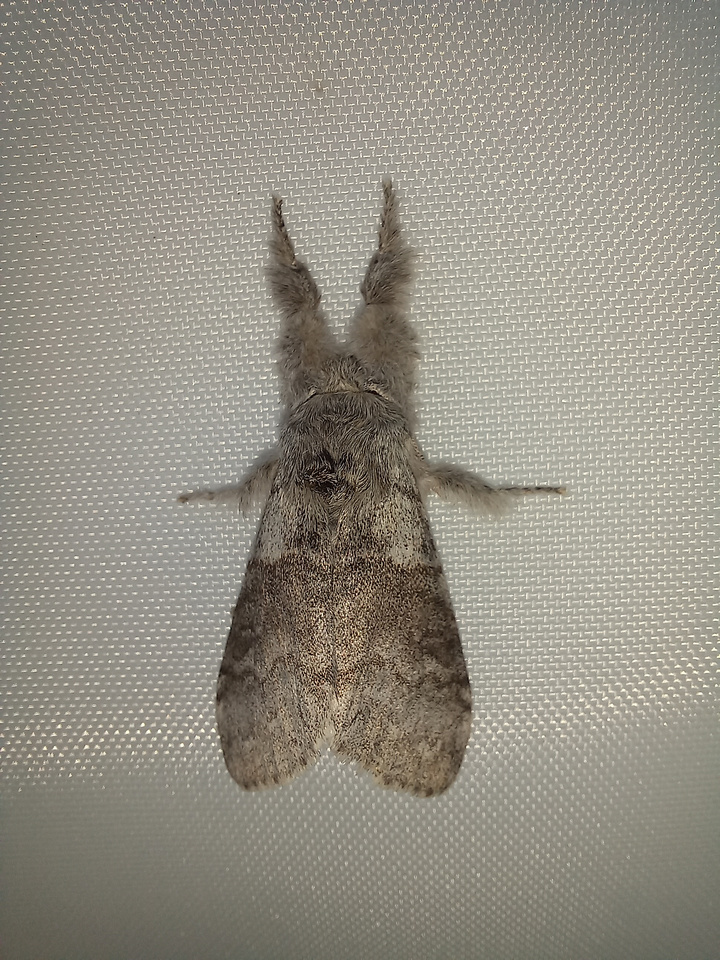 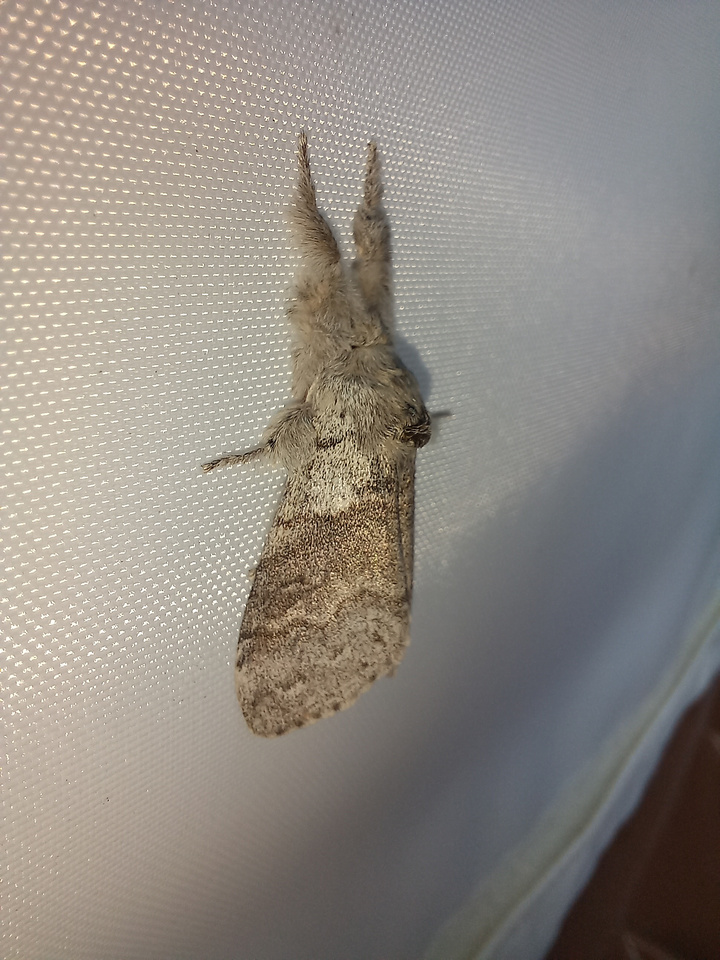 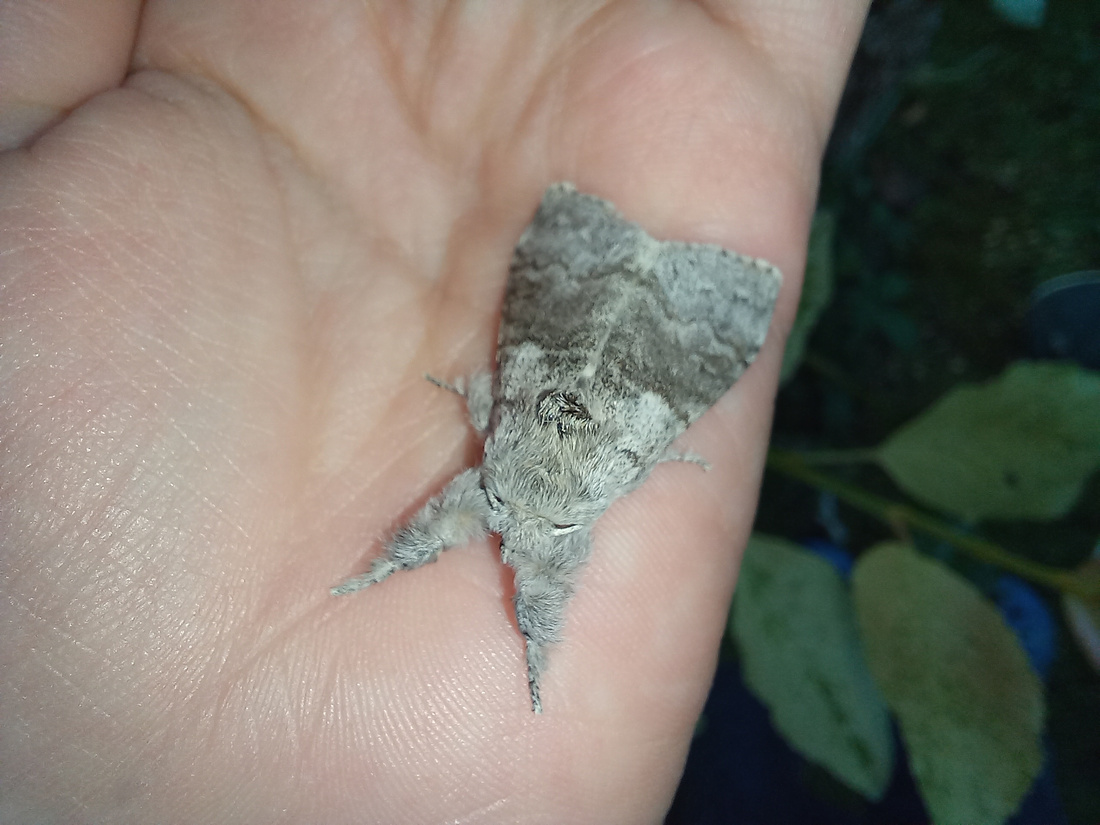 On the 21st, concerned that we'd hardly seen ANY house martins so far in the month,  I drove Ben down to my old place of work in Alice Holt forest, Hampshire, where in summers gone by, there were always dozens of beautiful, bouncy house martins nesting under the eves of the main building.

Alas, when we got there, apart from seeing the last few green-winged orchid blooms (late May really is the end of that flower's season) ... 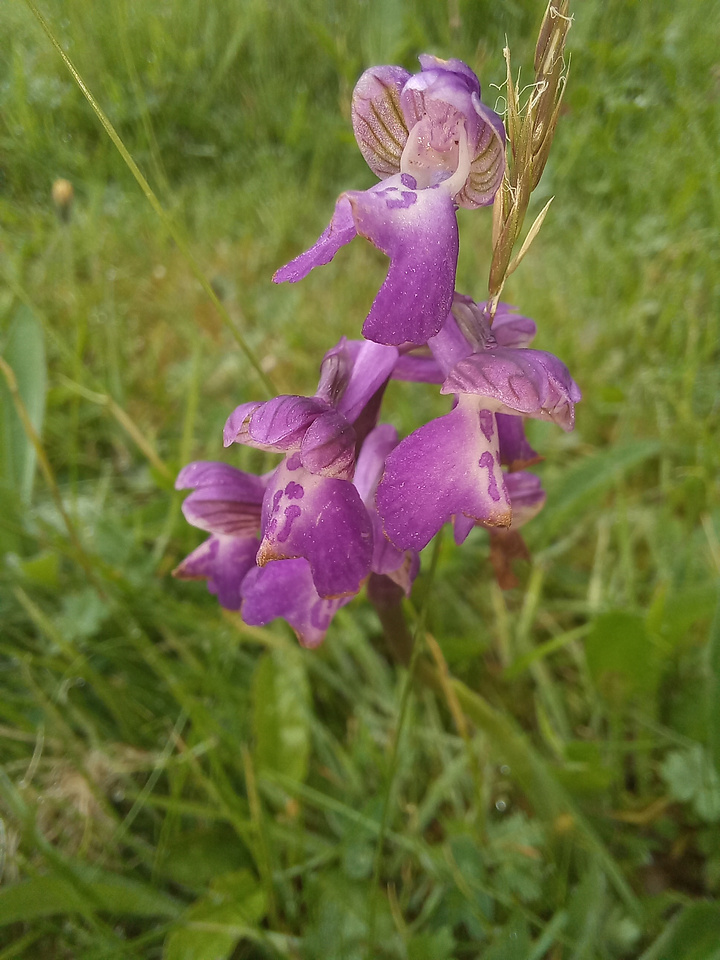 we saw NO house martins at all. NONE. Nada. Zip. Zilch. I hadn't been down to this place since before the pandemic, but to find in that time ALL the nests (both natural and artificial) had been abandoned, was really, really sad. OK... whilst I still think that swifts are the best bird of all, both swallows and house martins (and to an extent sand martins I suppose) are probably more aesthetically-pleasing - house martins in particular are a joy to look at. I was... no... we both were (Ben and I) really quite upset that the birds of my work summers at Alice Holt had abandoned ALL their nests over the course of the pandemic (very possibly on account of a very large new build building being erected RIGHT in front of their traditional nesting site) over the past two years). You can see the abandoned artificial nests in the photo below, under the eaves - in years gone by when I worked here, each nest would be PACKED with beautiful, noisy, glossy house martins. So sad now that they're empty and it' so quiet there.

OK. Better news now after all that doom and gloom. Late in the month I photographed a dark arches moth caterpillar which I nearly stepped on during one of my daily 5 mile walks. 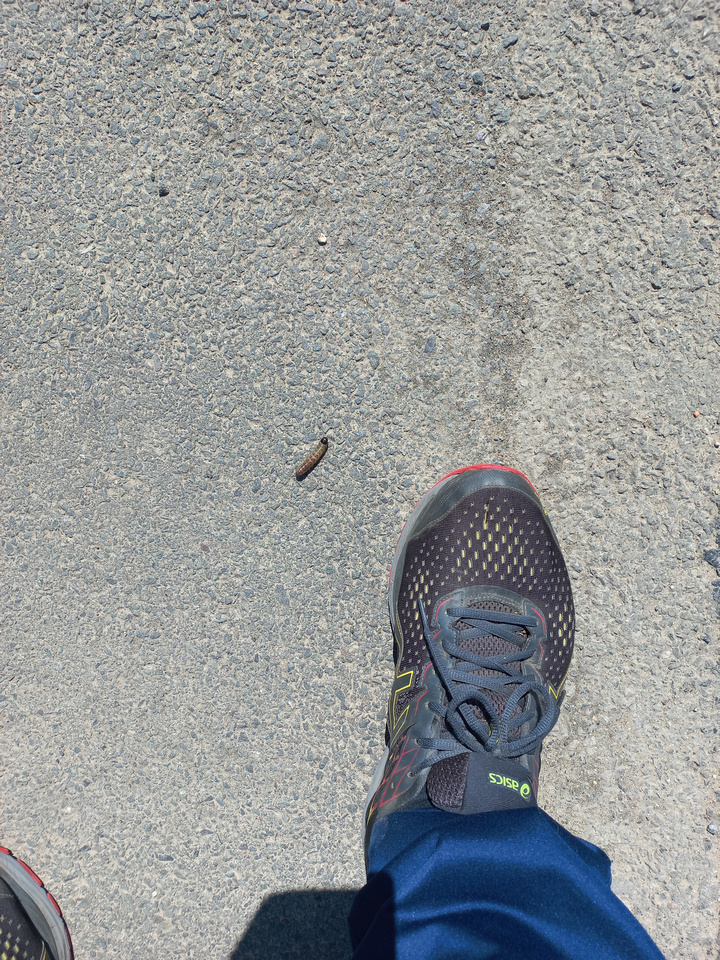 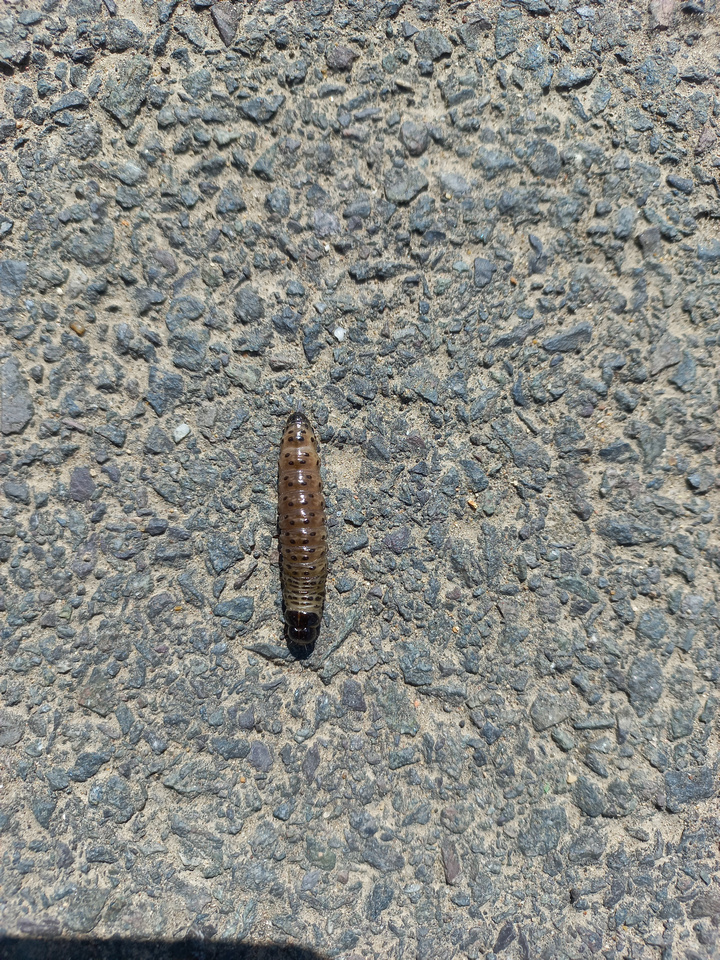 This is a very distinctive caterpillar I think, which looks rather like quite a few sawfly larvae. On those walks too, I managed to see a great scorpion fly, many roe deer, quite a few beautiful bullfinches (another bird vying for a spot in my top five I think) and an incredibly loud lesser whitethroat -  as well as a pair of buzzards that use a set of goal posts at a local school to roost on - I don't know why that amuses me so much, but it does!

By the end of the fourth week of May, 'our' garden hedgehogs were really getting quarrelsome over the singular feeding station I have set up for them. In the video below, you can see two hedgehogs below really getting waaaay too close to each other at the feeding bowl. So much so in fact that I rather think I'll need to devise a new way of feeding them where they don't have to tip each other on their backs to get a gobfull of hedgehog kibbles. I'm (as you may know) VERY conscious of trying to look after the wildlife in my area, rather than look after my view of the wildlife, so I think I should get on this (redesign of hedgehog feeding station) lickedysplit. I'm sure the way it's set up at present simply just stresses them out (and makes the passage of parasites such as fleas and ticks which you'll also see in the video below) far easier.

Finally then. I've saved the best 'til last.

Ben is playing a lot of golf with me at present, and is getting very good at it. On 27th May, I decided to book us a round at Pine Ridge golf club, near Camberley. A proper, grown-up golf course in the scots pines and heathy sand belt of north Surrey. The golf was good, the weather was blistering and the course was a real delight.

ESPECIALLY on the 14th tee!

Ben walked up to his red (juniors' and ladies') 100 yards further forward than my yellow (mens') tees and as I walked to mine, I noticed a big crow attempt to scare something at the back of the tee box, on the ground in the sun.

I walked over to it - and there, sunbathing on the tee was a little adder!

I think it was about 20-22cm long and pretty thin (not too stocky really) so I expect this was one of last year's young which hibernated as an 18cm or so youngster, and was this year, intent on starting to really feed properly to get bigger - a lot bigger with any luck. After it had indulged in a spot of sunbathing of course!

I didn't have any other camera with me than the one on my phone - so I got a quick photo and a few short videos (spliced together below you'll see) then I physically-suggested to it that it might like to carry on sunbathing right at the back of the tee box, where golfers following us around the course (that would soon be on the 14th tee after us) wouldn't see it, let alone step on it.

I've seen grass snakes on golf courses before (in fact the biggest snake I've ever seen in the UK was a 150cm long grass snake in a drainage ditch on Wexham park golf course, near Stoke Poges) but I've never seen an adder on a golf course before!

I fell in love with Pine Ridge golf course on the 27th May this year then (my first time I'd ever played at this course) and I absolutely fell in love with the 14th tee (even if I didn't score too well on that hole after getting all unnecessary about an adder on the tee!). 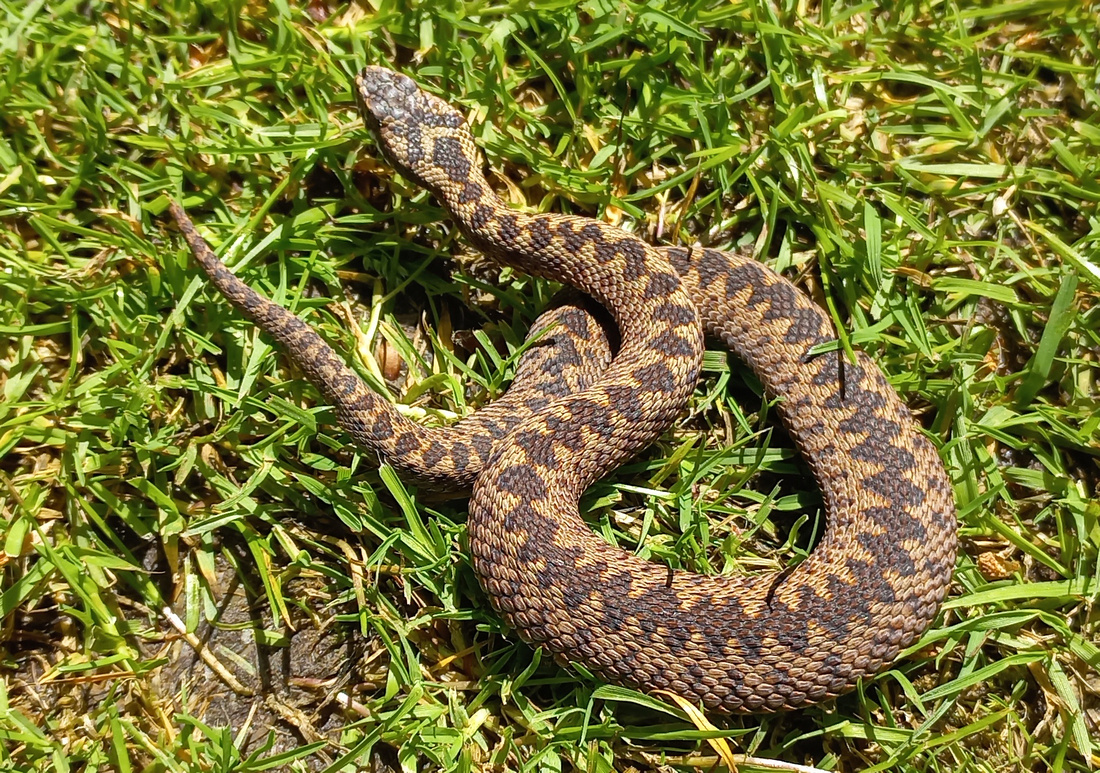