Finally - we've made it through five or six months of depressing, dark dankness (in the main!) and We step properly now into Spring after arriving at what *I* think is perhaps THE most exciting month of all... April. 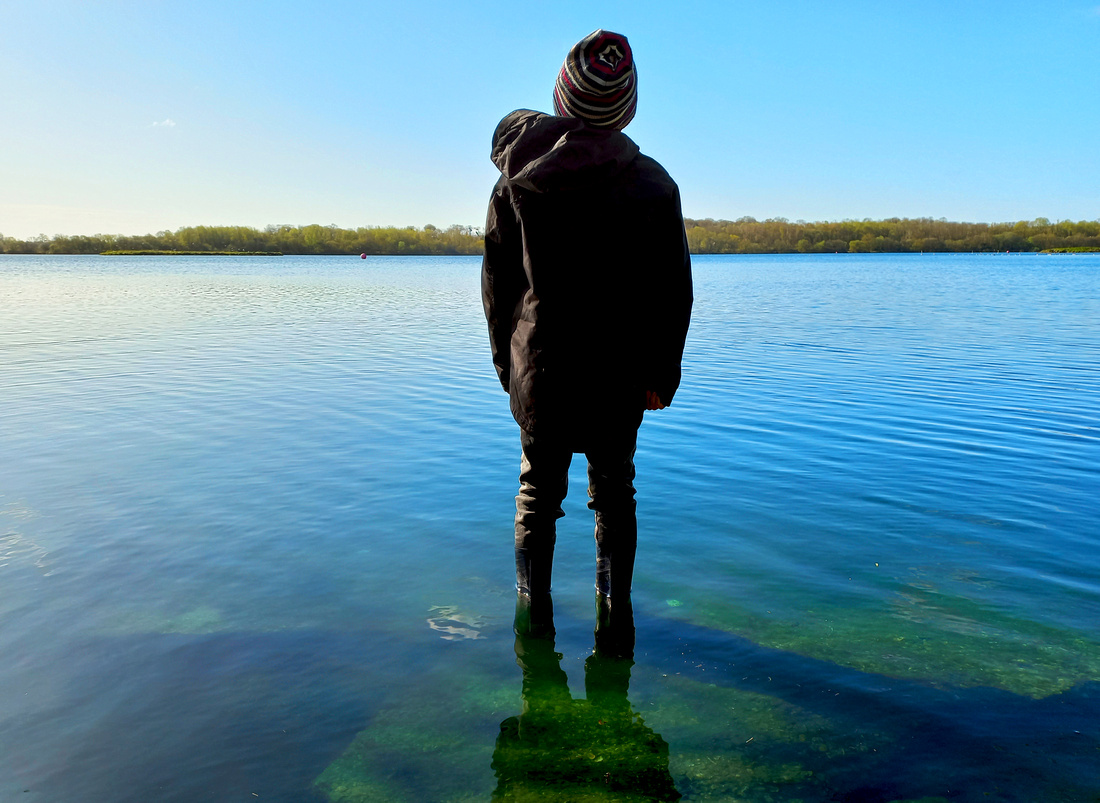 April is when many things are born (including me - I am (of course) an April baby). When frogspawn becomes tadpoles, when many birds start to fight for and build their nests and lay their eggs, when rose chafers start their helicopter flights around compost heaps and flowering photinia bushes, when leaves start to appear en masse on trees, when woodland floors are carpeted with purple bluebells, meadow and field edges are speckled with dog violets and lilac bushes erupt into flower. If March was the yellow month then April is when purple reigns for sure.

We have three (I think) hedgehogs visiting us each night. One, the smallest, seems to be suffering pretty-badly from an overload of parasites (fleas mainly I think) but the other two (I think) seem full of energy and life. At least two of our visiting hedgehogs are male - but if I'm counting the one healthy, big one, twice - then BOTH are male. (Pretty sure we have three though - two males and one female).

We have two house sparrows now nesting in our (so-called) "tit box". No eggs yet, but they are both regularly bringing in nesting material to the camera box, after spending very early April fighting for squatters' rights. (see short video below).

Our frog spawn is now tadpoles of course and the netting has been taken off the pond as there are no more leaves to fall into the pond any more (we always wait until the sticky oak leaves have dropped - and as many readers of this blog will appreciate, oaks tend to keep their leaves all winter as brown relics UNTIL they're pushed off by the developing green buds in April).

Ben and I are still running around the local countryside like blue-arsed flies, looking for birds to add to his year list. March, as you'll remember (I'm sure) ended with a very unexpected glossy ibis - but April has been much more standard, with Ben ticking off the newly arrived and singing blackcaps, cetti's warblers and whitethroats.

I have often seen swallows arrive in the shires by the last day of March, but it took us until 17th of April this year to see our first swallow of 2022, flying around one of the many horse stables that we are surrounded by here (near Ascot and Windsor), a day after we saw and heard our first common terns. woodlarks at the local heath (see photos below), 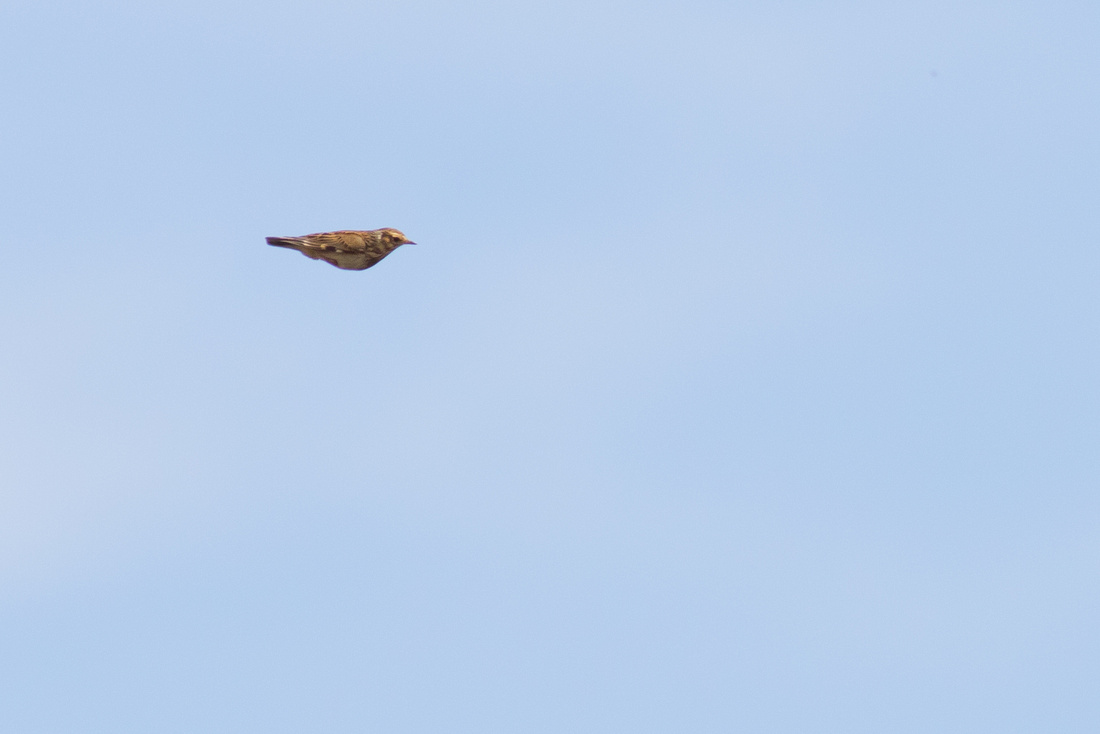 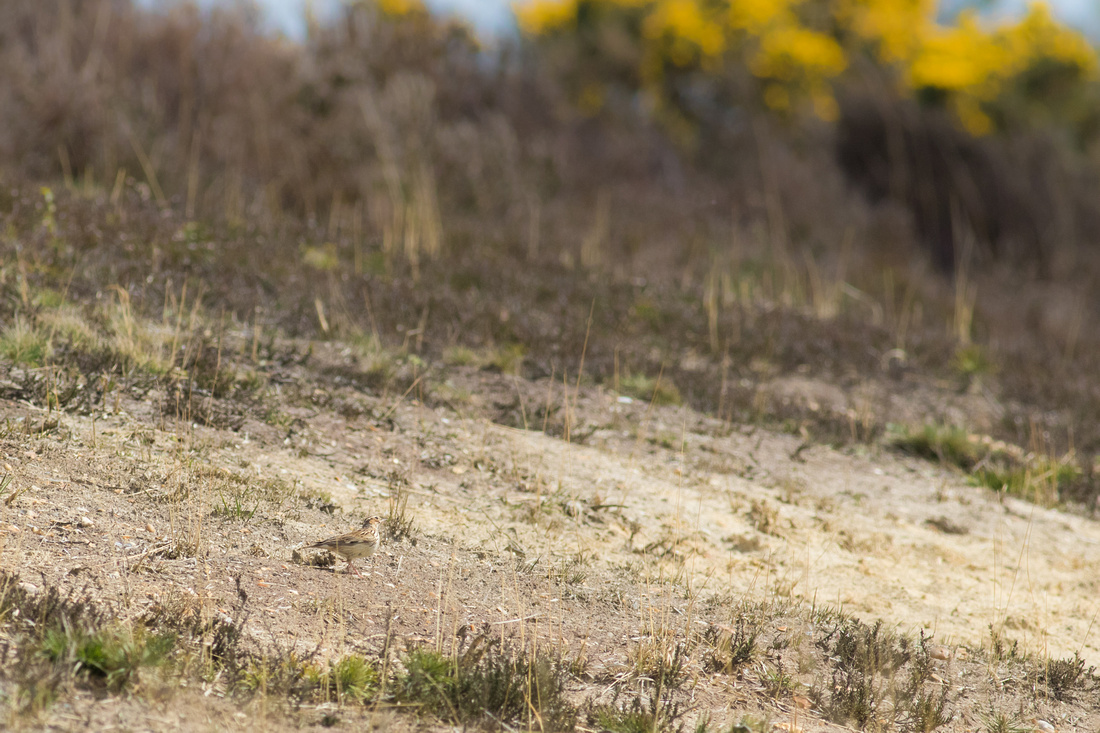 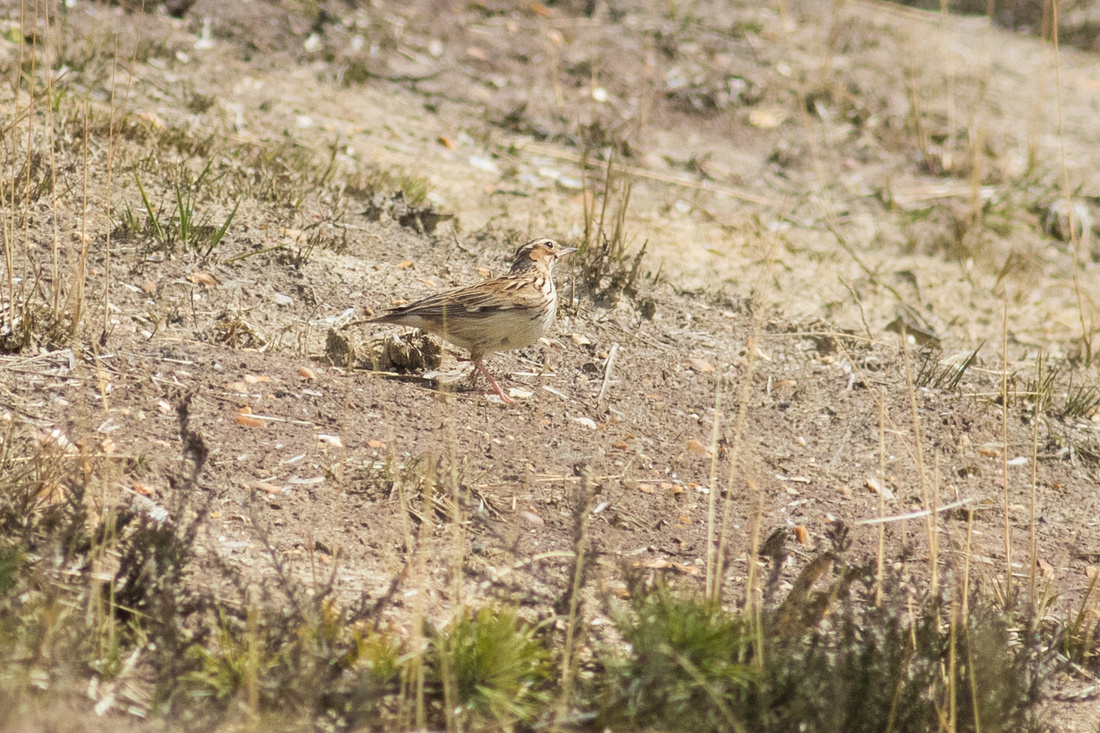 a common sandpiper and a redshank (we missed both last year), a rogue barnacle goose on the 30th as well as a lovely treecreeper which we spotted on our annual bluebell pilgrimage (see photos below). 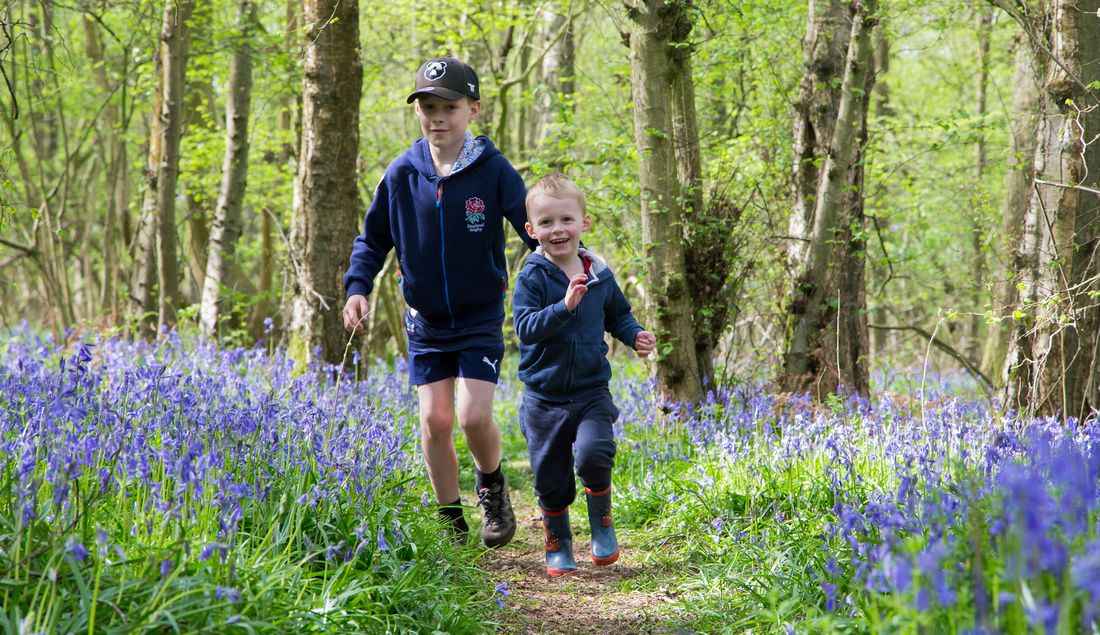 We've also managed to see garden warblers, reed warblers, sedge warblers, common terns, oystercatchers and one of our favourites - nightingales - belt out their cut glass song at a local haunt, just yesterday (30th April). We needed to leave the house at 5am for thissun. Photos of the dawn over the lakes on this nightingale hunt can be seen below. Apologies for the poor quality of the photos - both were taken with my phone. 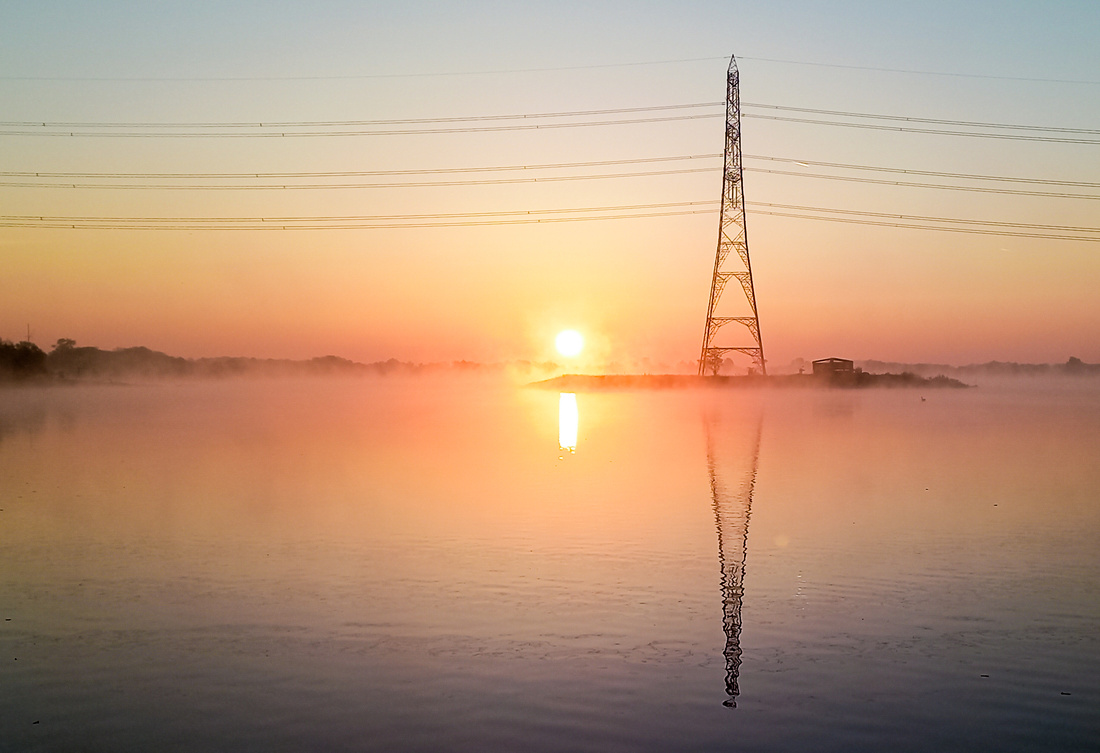 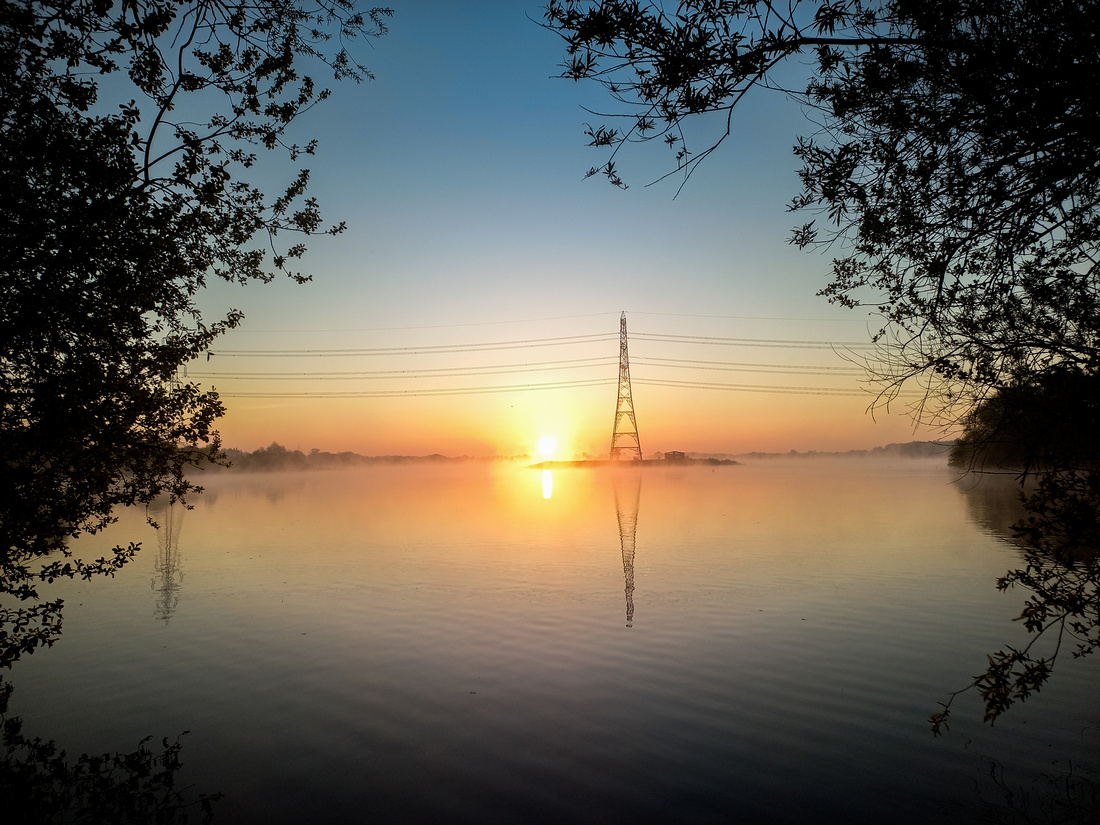 Our annual nightingale hunt has become a tradition like our annual bluebell pilgrimage to be honest. Another reason why I (in particular) do LOVE April!

Finally, regarding birds... Ben and I have already been down to the heath to see "our" local Dartford warblers, which are very active and vocal now, bouncing about as they are on the yellow-flowering gorse bushes. Whilst oochering around on the heath, unwisely in shorts, Ben unfortunately got bitten by a deer tick.

Now I'm VERY conscious of Lyme Disease or Borreliosis, having been bitten myself by an infected tick about 13 years ago now and having suffered (we think) and (we hope) recovered from this disease, so we caught this tiny tick (see photo below) very early and have kept it, just in case a bullseye rash appears behind Bens' knee and we have to start the battle (it's ALWAYS a battle these days) with the NHS to get treatment in time.

Regarding the photo below - what you're looking at is the bottom of a clear plastic moth collection jar with the tick flattened against the plastic. The LARGE circle at the bottom of the jar is 8mm in diameter - so that should give you an idea of just how small this tick is. Perhaps 1.5mm across. That's all. 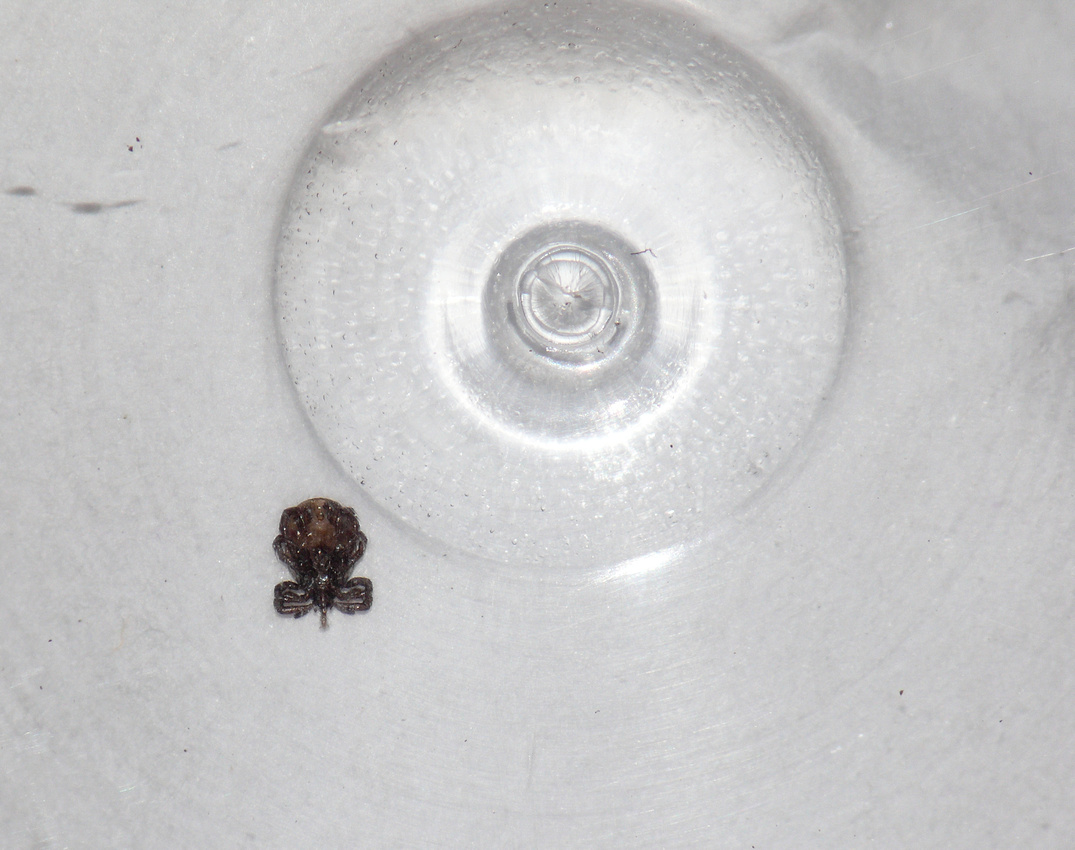 Whilst watching Dartford warblers, redpoll and woodlarks, I took Ben to see the local ravens' nest on a radio mast situated on the heath. Ravens nest at sites year after year - like many big birds, just adding to the nest itself each year which grows as a result.

Unfortunately this year I've been dismayed to discover that BT (I think) who own the radio mast (or at least did) - have strung up a number of plastic decoy crows around the nest, in a bid to deter these magnificent (AND PROTECTED) birds from nesting.

I think the majority of these decoys (I think there are about 6 plastic crow decoys hung upside down around the mast -  including right under the nest pile itself - and at least one plastic owl decoy  - see photos below) were put up in the last few weeks - and if that is so - then that is an offence. 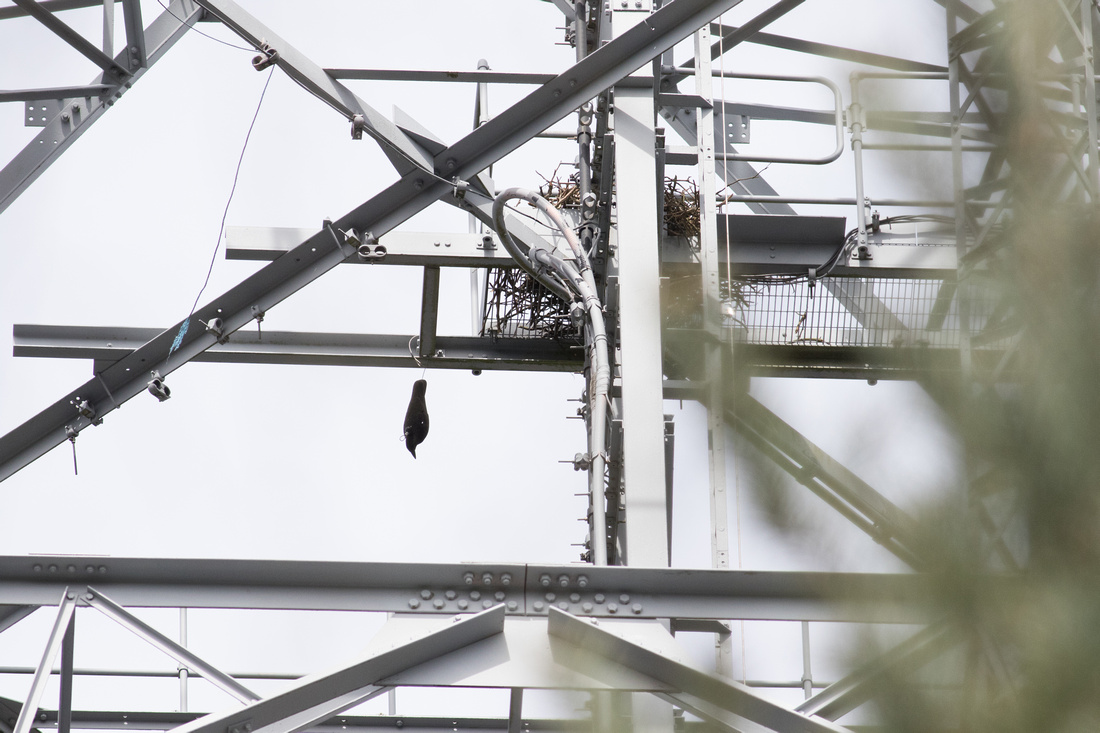 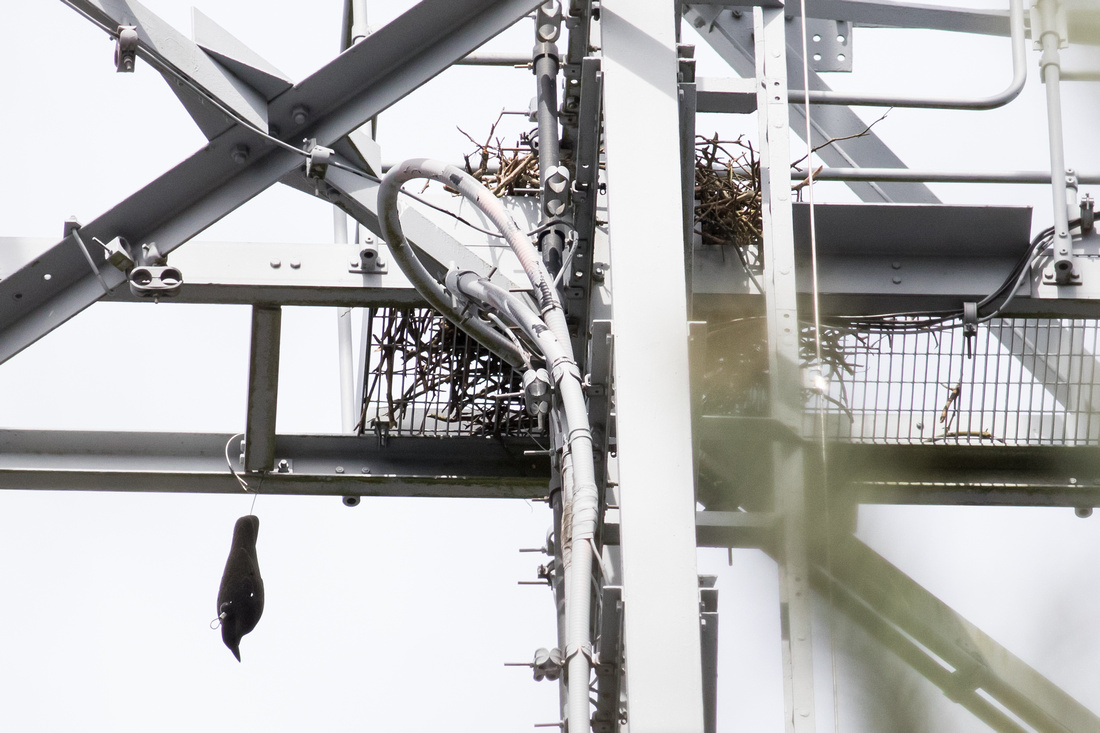 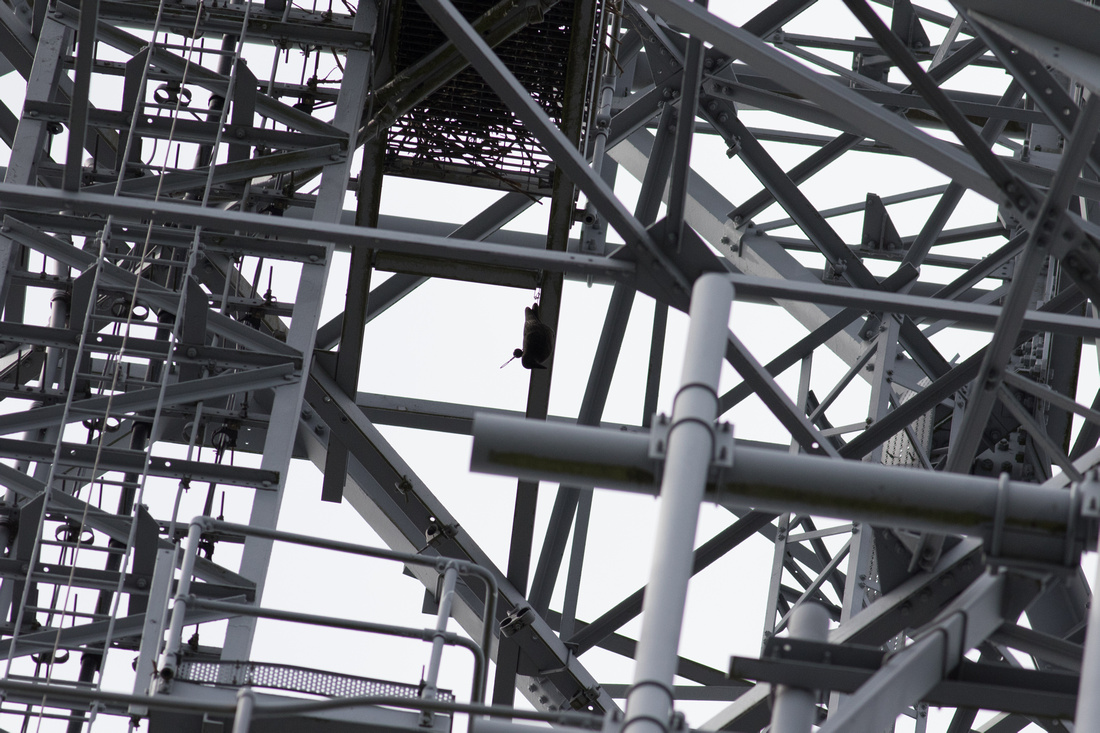 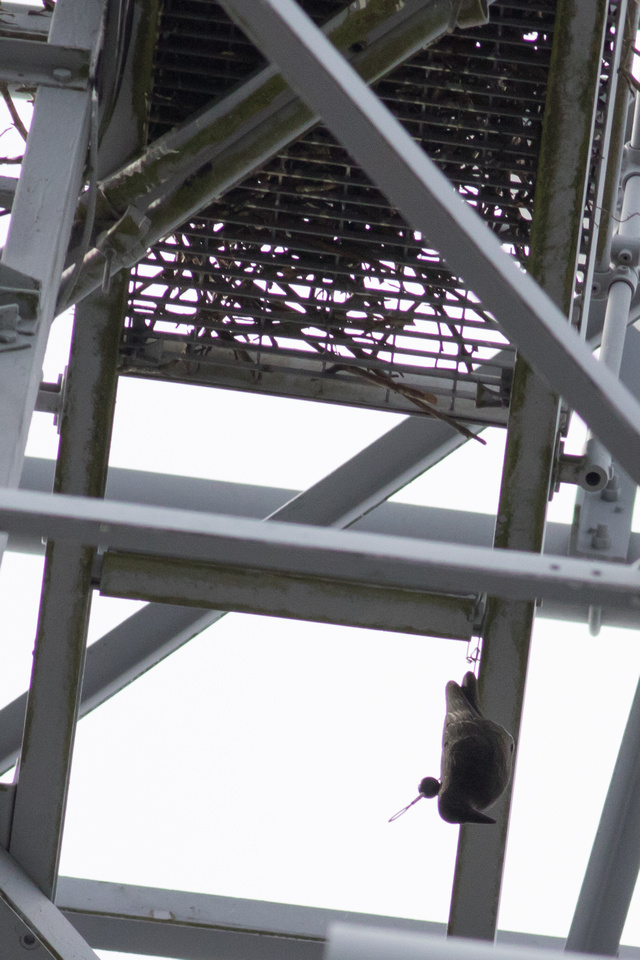 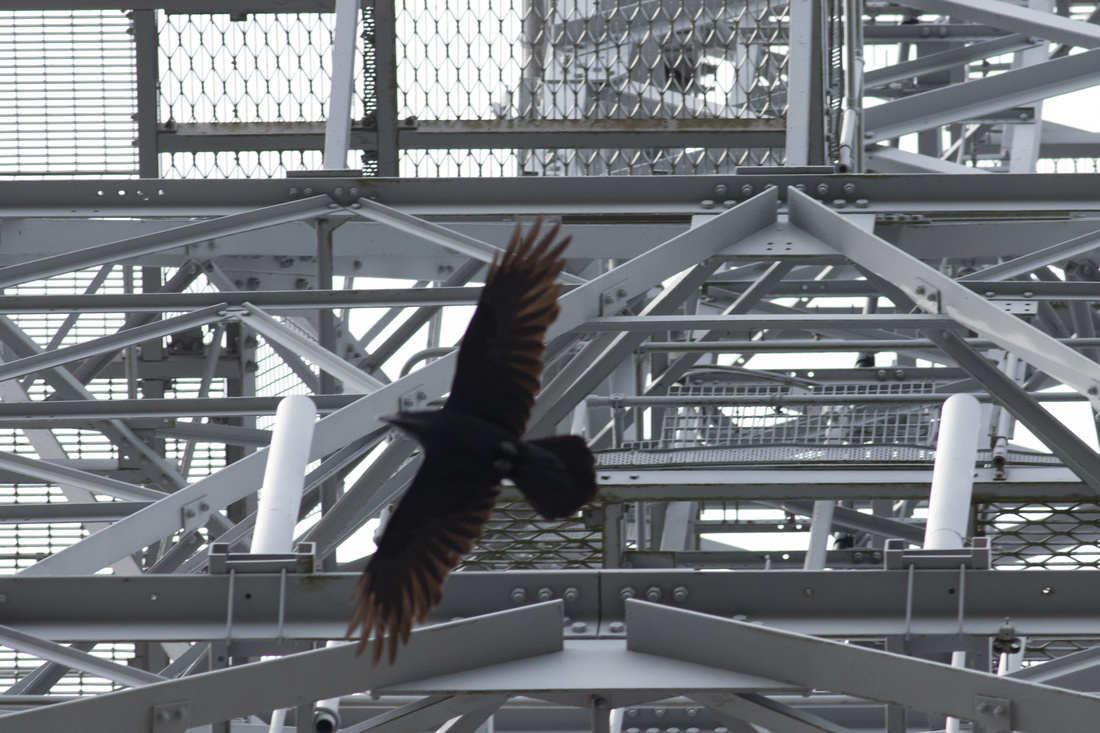 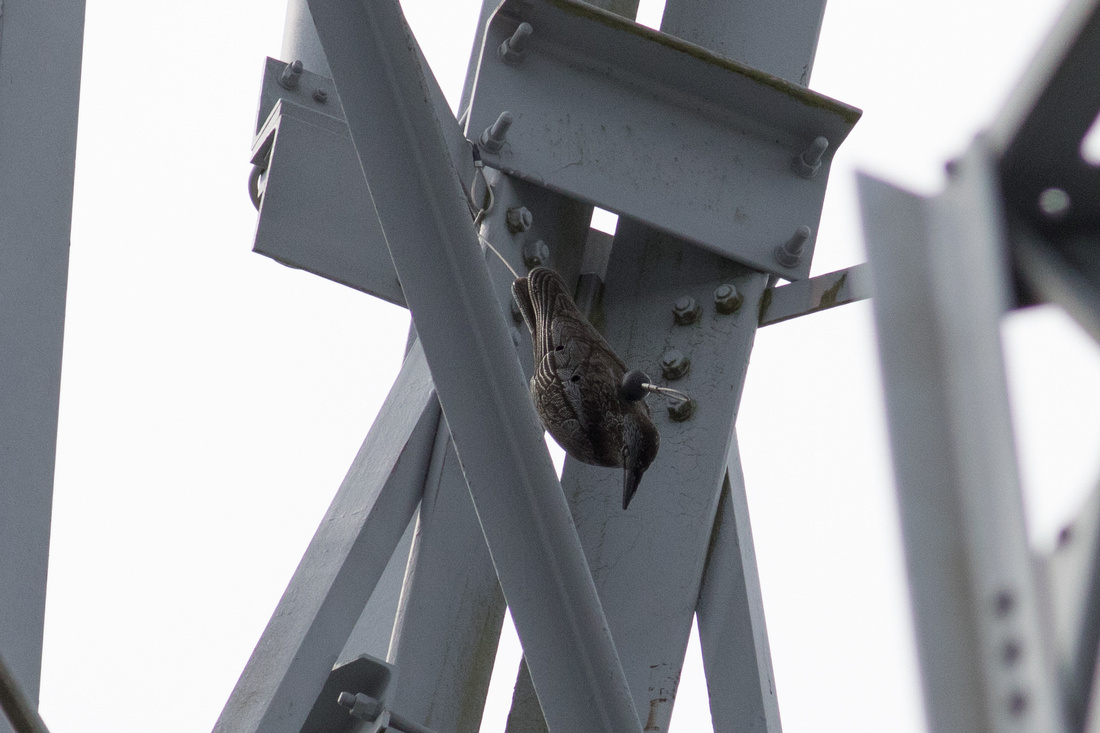 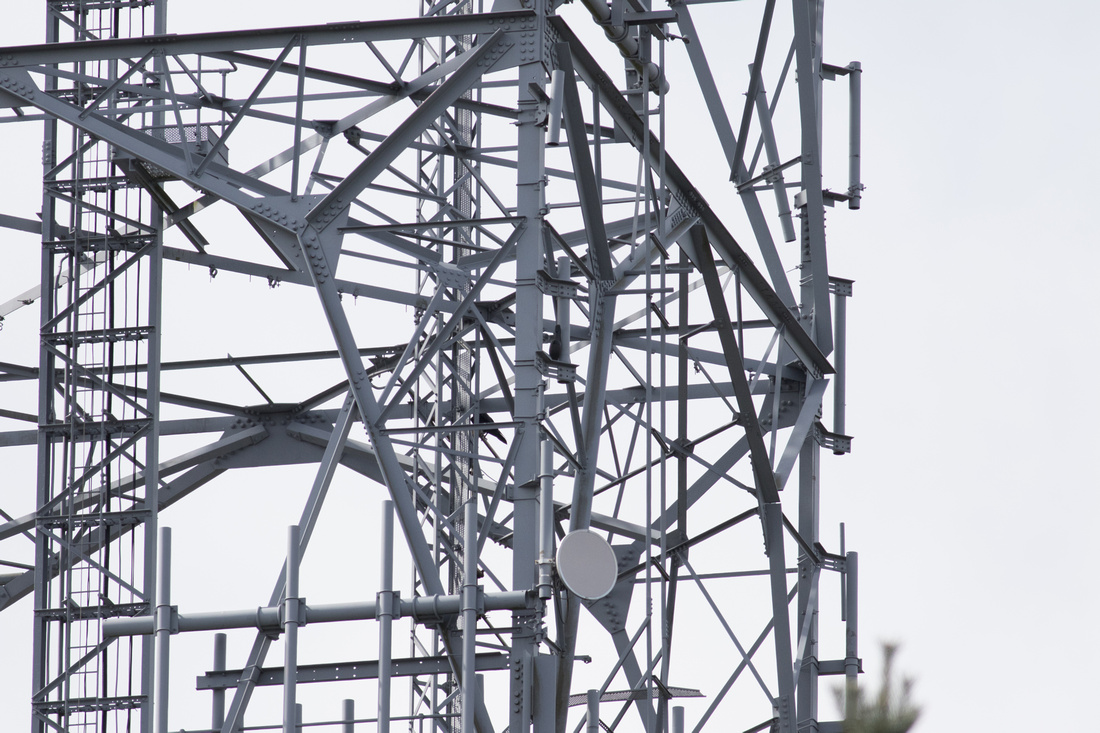 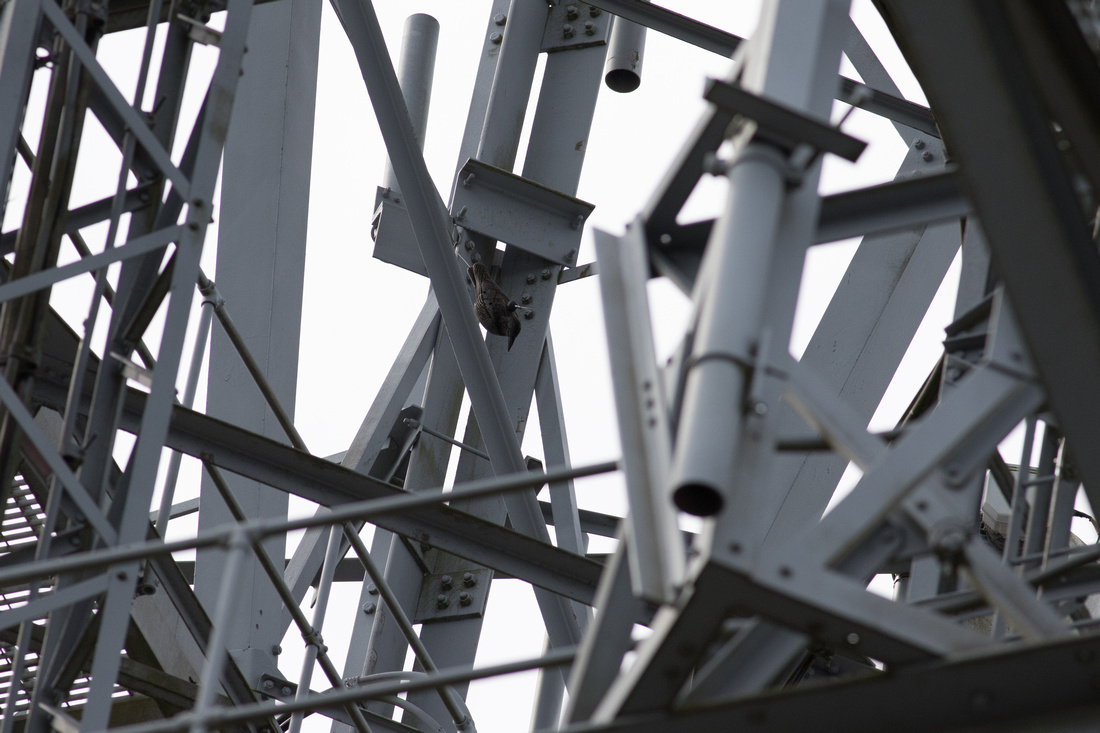 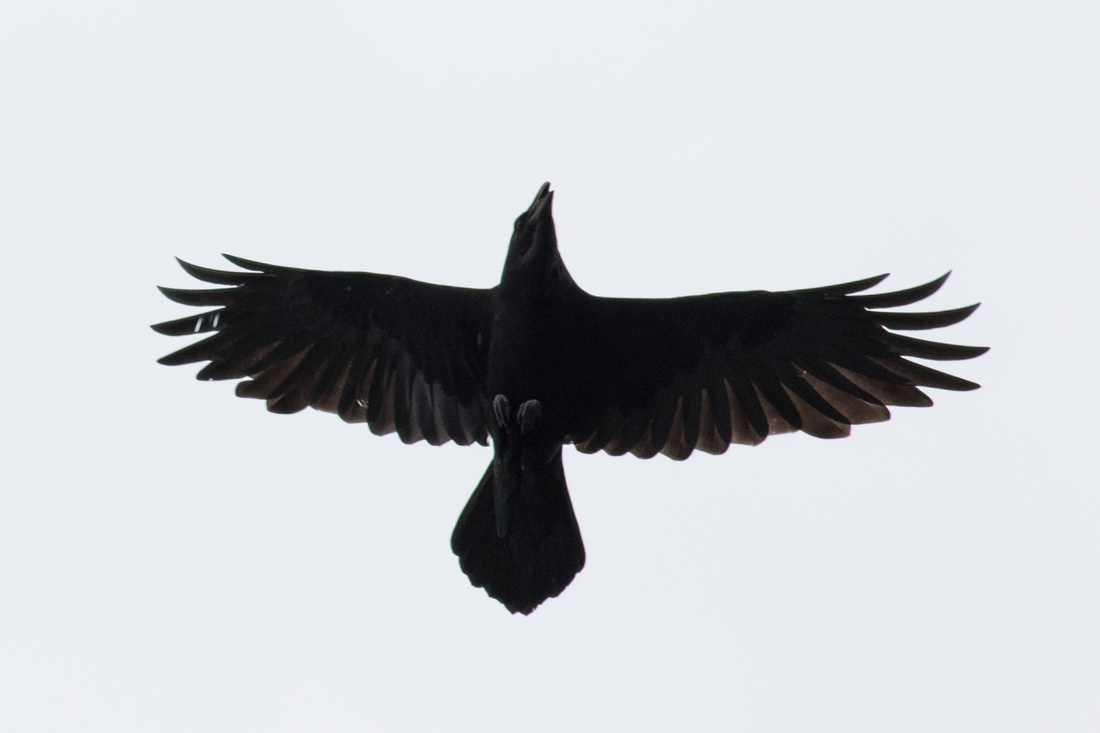 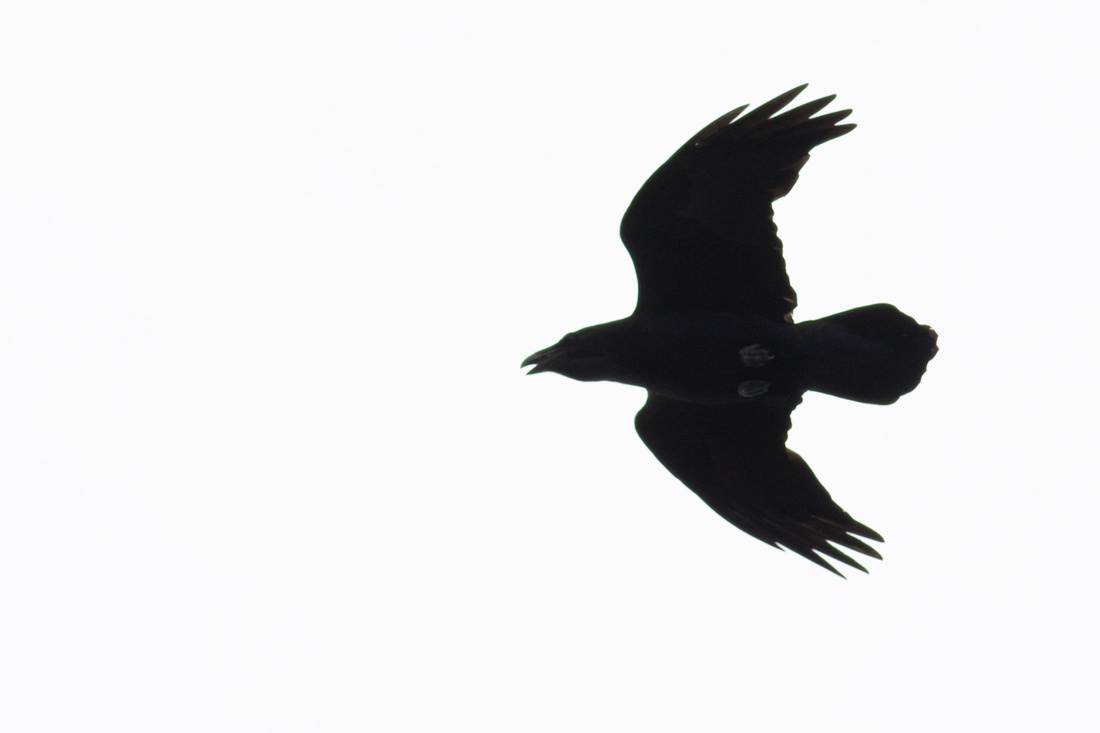 I've been talking with the crime unit of the RSPB regarding all this, so I'd best not say any more here.... but all I'll say right now is that even IF the radio mast owners (BT I think) haven't committed a technical offence (if they for example, strung up these decoys in the winter, before the nest site was actively returned to), it's incredibly exasperating and disappointing to think that they felt they needed to do this in any case.

The nest itself is in the middle of the tower, very high up, and would have no discernible effect on any transmitters on the tower itself nor block access to those transmitters. The beautiful ravens would only be there for a matter of weeks - then they'd be gone.

Sure... if they were bothering or taking local livestock then I'd understand if BT approached Natural England for a licence to get rid of the nest. Natural England would probably grant this licence.

But... there is no livestock being bothered around the mast. We're talking about very populated Surrey here, not the wilds of Yorkshire.

Finally - as it stands, as I write, the ravens are still checking out "their" radio mast, if not their old nest itself just yet. They DO seem flustered. I hope the RSPB think that what I'm reporting merits a proper investigation and failing that I hope the ravens still use their traditional nest site anyway.

I'll let you know when I know.

OK... that'll probably do for now other than to say... hasn't it been dry for ages down here (SE England)? Doesn't feel like we've had any sort of rain for weeks?! So with that in mind, please keep putting clean water out for birds and hedgehogs etc. They'll need it right now.

Right. That is it for now.

Days now until the best birds of all return.

Maybe they already have for you?