February. Up go the larks.

The daffs are (of course) up all over the place and the first crocuses are pushing through the garden (see the photo at the end of this post).

I should have known better really than to comment on January’s (almost complete) lack of rain, for February of course has completely made up for that with storm after storm scudding across the UK, bringing with it 80mph gusts and a shed load of floods.

Storms Dudley, Eunice (in particular), Franklin and Gladys all wreaked their terrible havoc locally – so much in fact, over a week (no more) that I got very worried about “our” local barn owls – which simply will starve during periods of wet and/or windy weather as we got this month.

I took a drive past one of our barn owl roosts after Franklin and I was completely made-up to see one of our owls alive (if not well) – ready, it seemed, to leave its roost in daylight hours between storms to desperately try and catch something to eat.

I don’t KNOW that both of “our” local barn owls made it through the storms but the one I know did make it was in the far more exposed roost – so I hope both did make it. I’ll see soon enough, I guess.

Barn (in particular) owls have little business breeding in the UK – so adverse are they to inclement weather of the more northerly latitudes of the northern hemisphere. I remember going to see what were billed as the most northerly breeding barn owls in the UK, perhaps in Europe, in the mid-80s, at a nest site near Inverness. Barn owls MUCH prefer the drier, warmer climes of (for example) the Mediterranean (don’t we all?!) so I never stop counting my blessings whenever I see our local barn owls – and better still, when I see they’ve survived another period of blummin awful weather here.

What else has happened this month then?

Ah yes. I also commented last month that we’d not seen any hedgehog activity at our camera feeder since December 19th. Well… at 2am on the morning of February 7th, one of our local hedgehogs ‘got up’ after 50 nights of (the first period of) hibernation and took some food from its bowl.

It has been back to the bowl a few times since, but it may be a week or four before it’s up and running again properly, i.e. every night and completely out of hibernation. I think last winter it hibernated for 100 nights in total. That all said, it’s lovely to have it back. I so feel very, very protective of our hedgehogs.

We had another visitor to the hedgehog feeding bowl in February, albeit a fleeting visitor. You’ll see from the video clip below that a woodmouse seemed to take a liking to hedgehog food during the month – although we didn’t see it that often.

Talking of woodmice, during February again I discovered another use for my wonderful HIK MICRO OQ35 OWL thermal camera – it can locate mouse nests at the bottom of those plastic tubes which protect young sapling trees from the local roe (and muntjac) deer. I had no idea mice (or voles I suppose) use these tubes to nest in – but they seem to. The video below shows such a nest. You can see the bottom of the plastic tube surrounding the sapling tree is glowing. That is to say that it is a source of heat. (You’ll know by now, I’m sure, that the videos I take with the thermal camera tend to be shot in pitch black conditions – so it was in this case too – I couldn’t even see the plastic tubes or saplings with my naked eyes).

I wandered up to the glowing base and shone a torch down into the plastic tube - sure enough I could make out a ball of moss and grass at the bottom of the tube – in which I *knew* a mouse or vole was sitting. Yup – my wonderful thermal camera is something else you know – and a LOT of fun!

As I’ve written about quite a few times now over the years, this month was the month, as it tends to be each year, when the nation’s toads (and frogs) start to hot-foot it towards their traditional breeding ponds, along their historical migration routes which often cross roads.  Our garden pond has just "taken delivery" of a couple of dozen (or so) frogs... and I hope for more of course. Give these amphibians an overnight temperature of 9C or more and a bit of rain, in February (or March if February is really cold and/or dry) and these stunning creatures will set off – storm Eunice started the migration this year and I moved a few of them off the road which crosses their migratory route nearest to the house. Spring is coming, dear reader(s?)!

Finally, as far as this monthly round-up is concerned, a little word on little birds.

Ben and I were very lucky to see both snipe and green sandpiper on a walk around a local gravel pit during the month. You’ll obviously make out the green sandpiper in the first photo below… but can you make out the TWO snipe in the second photo? You’ll do well if you can. 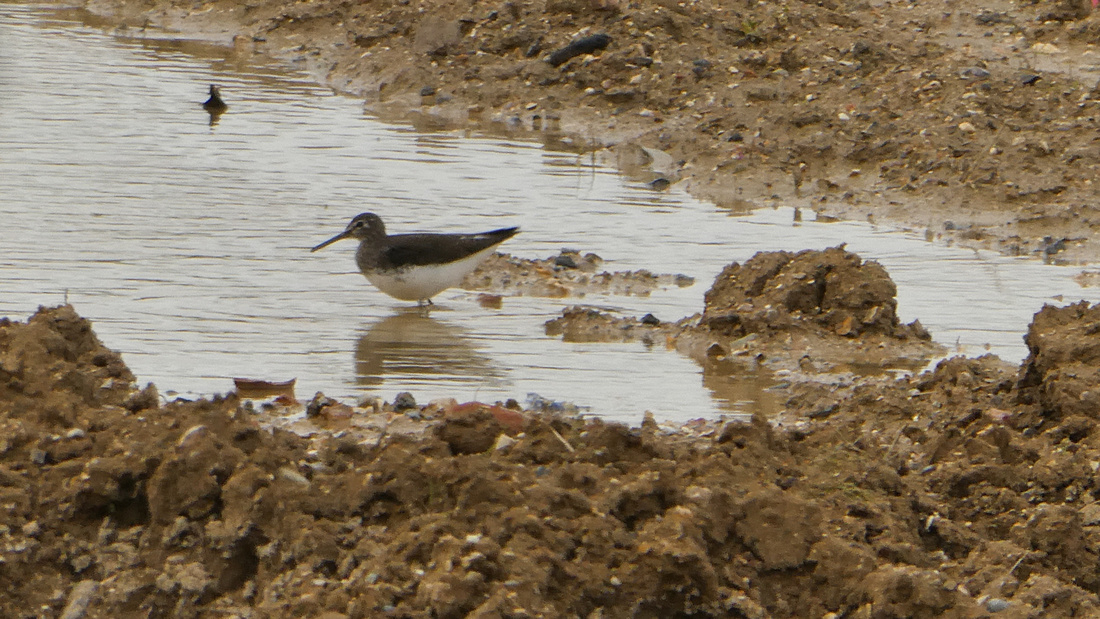 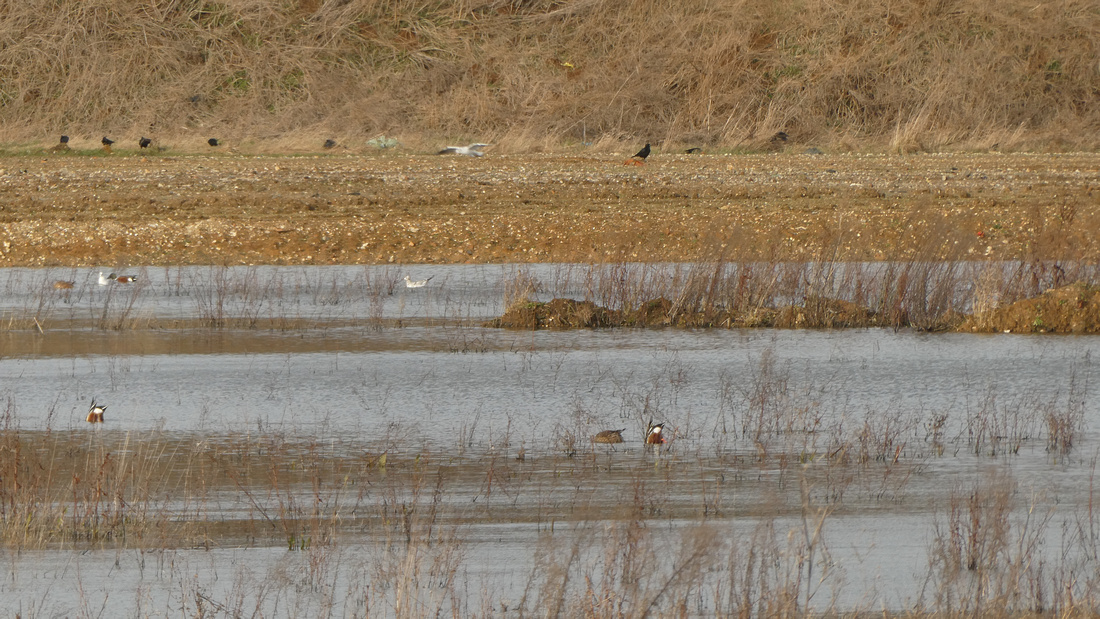 Neither snipe nor green sandpiper featured in Ben’s “Around the world in 80 aves” year-list last year, so we are really pleased to add these two lovely wading birds to his list this year (I think he ends February on around 70 birds – so he has around 30 to tick off to beat last year’s total).

Another walk for Ben and I on the top of a very cold Oxfordshire ridgeway one February dawn saw us tick off skylark, corn bunting and meadow pipit too.  We also watched a large flock of fieldfare taking worms etc from the surface of a ploughed field. I (at least) wondered if that would be the last time I saw any winter thrushes this season, as it won’t be long at all now before they all chuff off back to Scandinavia. I wish them well. 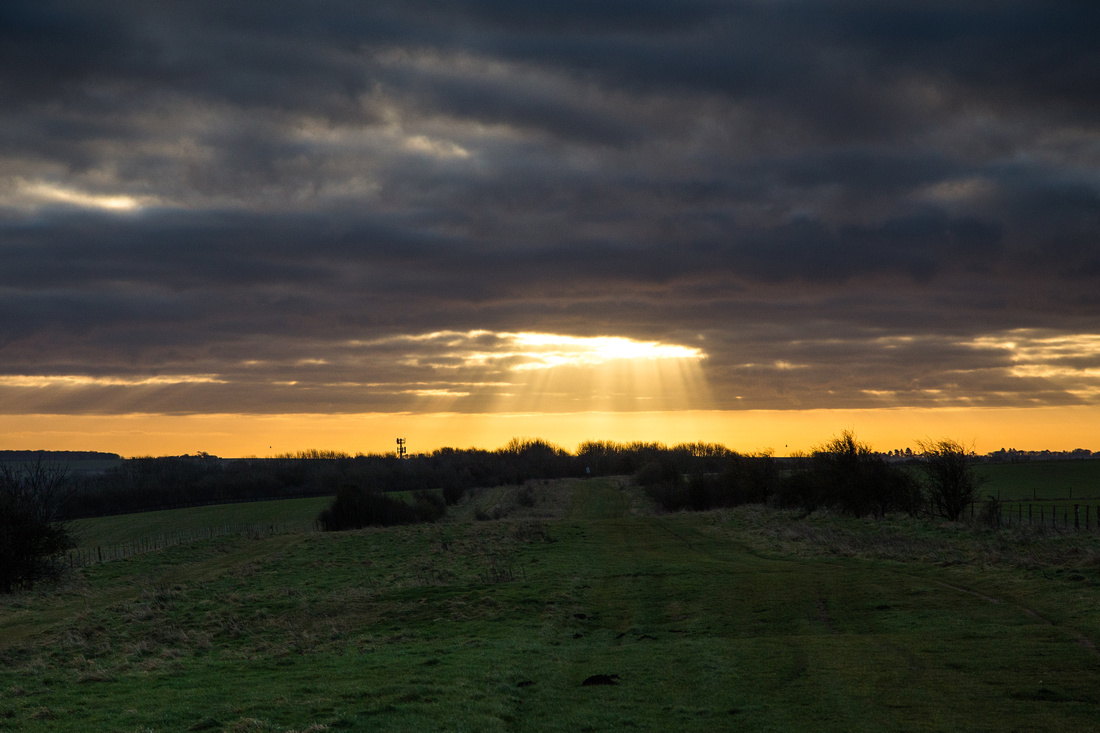 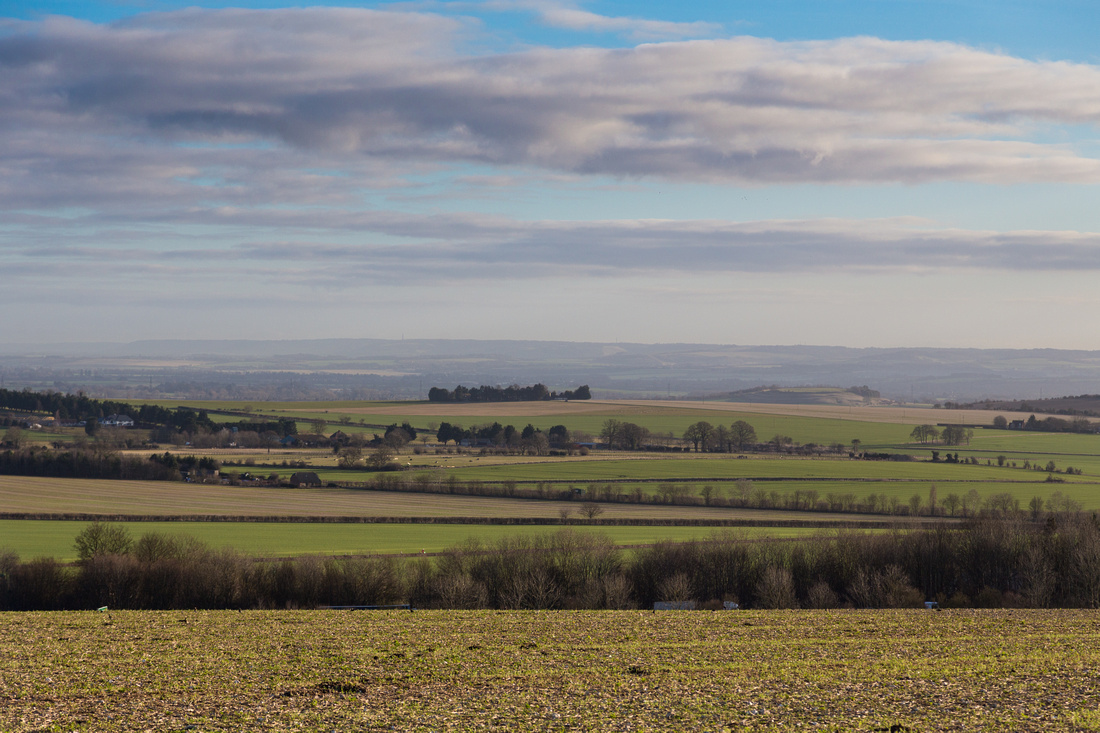 It was a really uplifting dawn stroll on top of the ridgeway as the sun came up as both corn buntings and more obviously, the skylarks were out in force and singing with all the gusto they could muster, in good numbers. A lovely sound to hear at any time, let alone in the most depressing month of the year, cold, dark February. 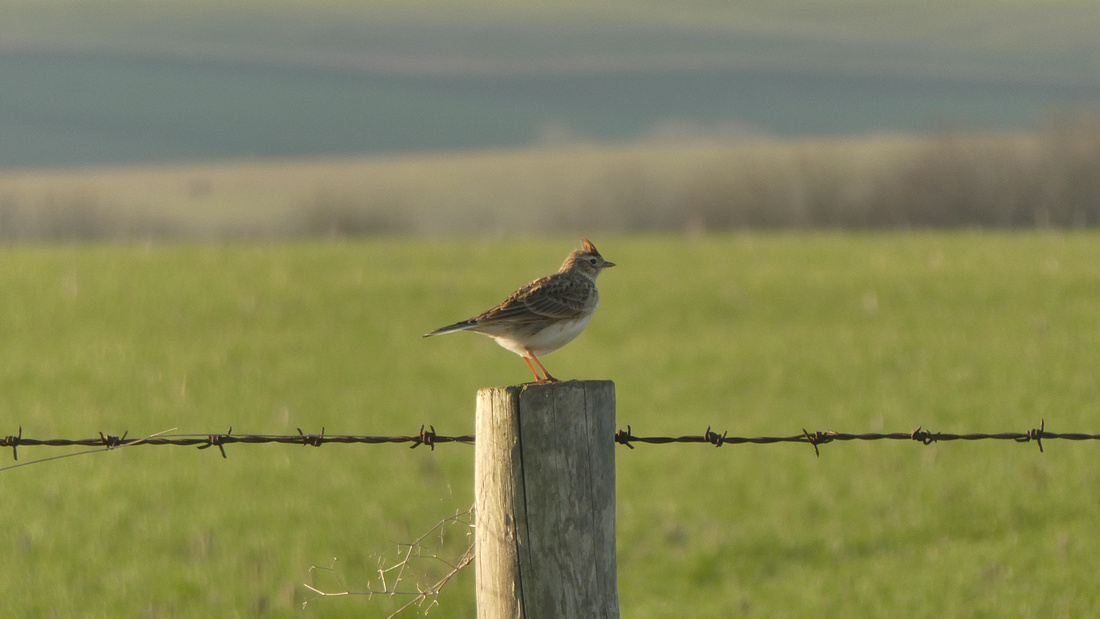 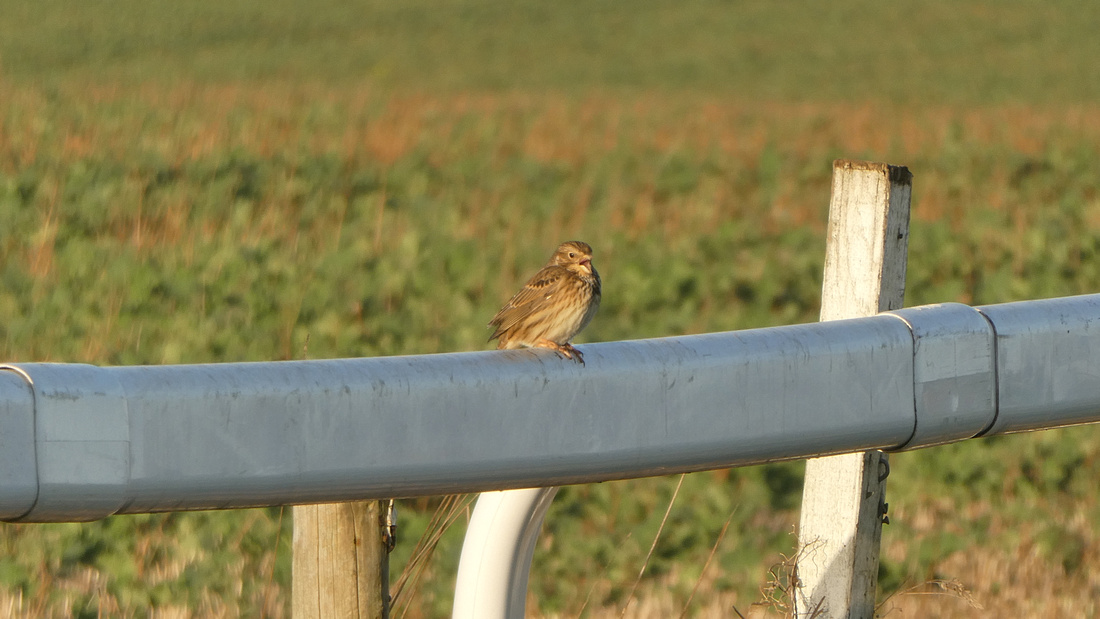 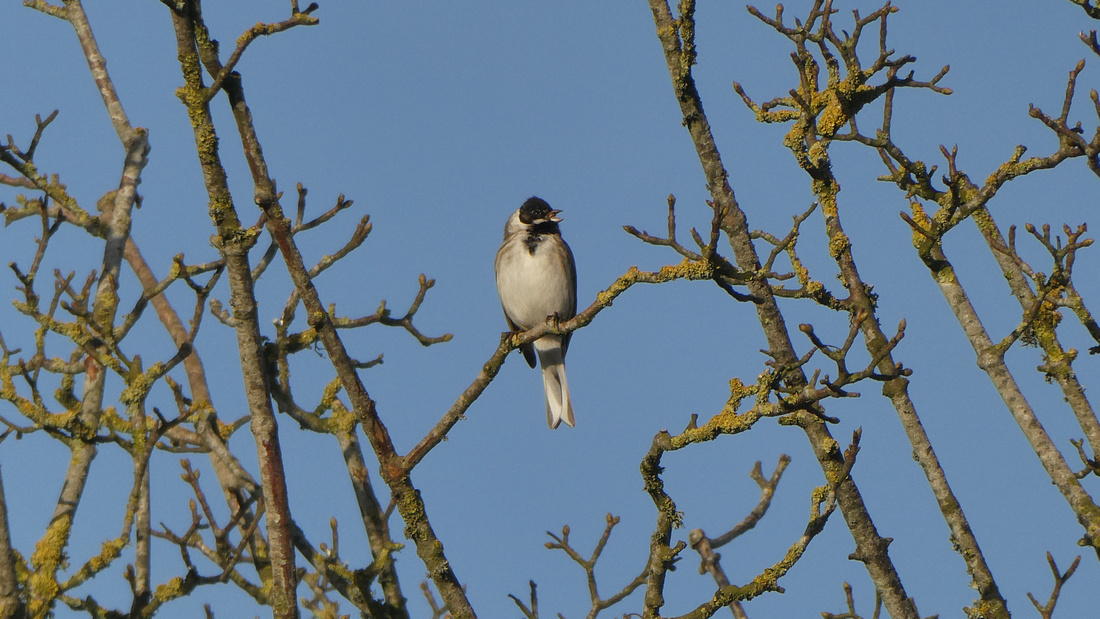 OK… we may not be there for a few weeks yet… and now that I’ve said all this, it’ll probably snow next week…. But Spring really felt like it was on its way on that morning up at the top of the ridgeway.

I just wish it would hurry up! 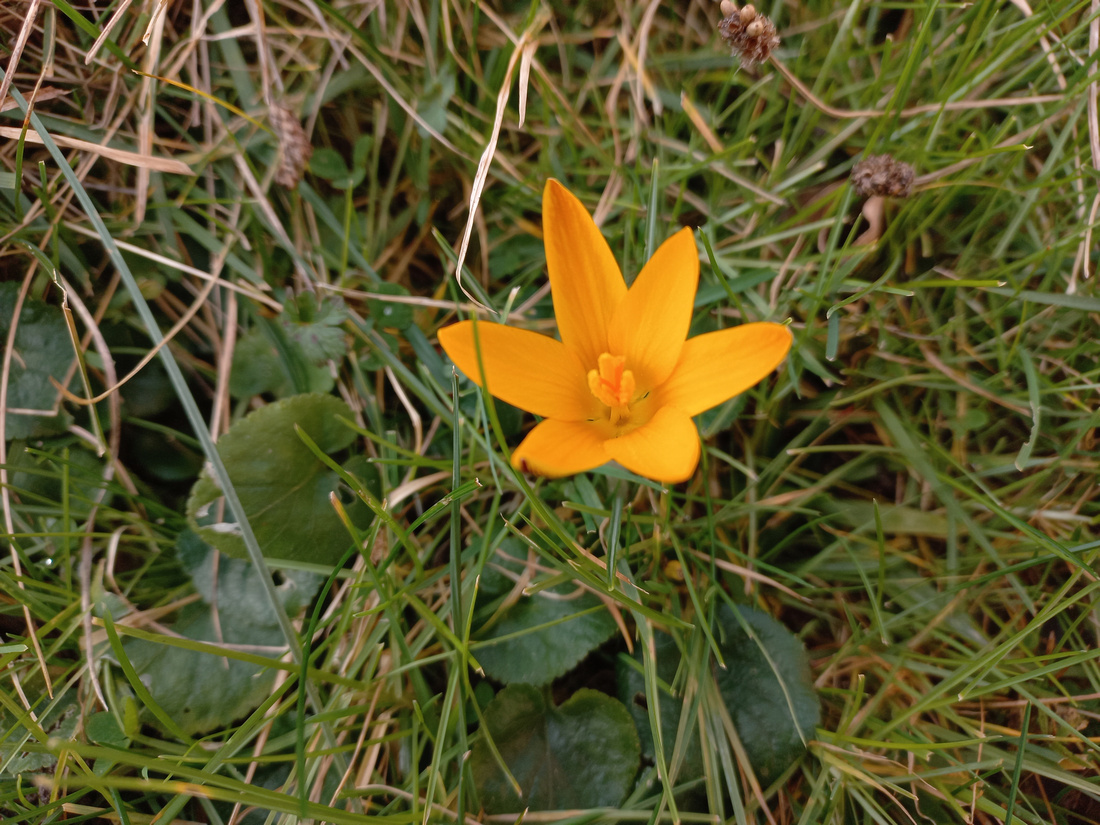