January. Sick 'n' tired, you' bin hanging on me.

Just a very quick update from me tonight, as the first month of 2022 comes to an end.

January seems to have gone on forever this year, although to be fair it often seems to for me (and many others I'm sure).

Have we seen any appreciable rain this month? I can't remember any to be honest... and as such... even our back garden lawn, comprised entirely of heavy clay loam, is for once at this time of year, useable! We've been practicing tackling rugby tackle bags and static biking - normally the lawn is a veritable quagmire each January.

Talking of the garden, whilst our hedgehog(s) hasn't(haven't) been seen since just before Christmas, a pair of house sparrows AND a pair of blue tits have been investigating our nest box this month. I suspect like most years these days, the house sparrows will win the battle for occupancy. We'll see.

All the (five) jays I've been feeding during the autumn and early winter have disappeared, so I'm saddled with something like 10KG of monkey nuts, which the couple of jackdaws and magpies aren't really getting through to be honest. A shame... I miss "my" beautiful jays... but they certainly have been all gone for about two weeks now after being CONSTANT visitors for the first fortnight of the month.

Very occasionally I feed other, smaller birds in the garden... just so we can see if we can attract a siskin or brambling or something like that, for my eldest boy's bird year list - and in that respect I have put up a couple of sunflower heart feeders which have, in turn, attracted a handful of goldfinches into the garden. Seems strange to think these days that back when I was a wee nipper, hardly ANYONE had goldfinches in their gardens, but instead they had greenfinches... but wind the clock on 40 odd years and those tables are definitely turned.

Regarding Ben's year bird list, yes... we are re-running last year's "Around the birds in eight aves" challenge. Last year we finished on 102 birds (flushing a lovely big woodcock from the 2nd hole at a golf course we were playing just before Christmas, which became our final species of the year) and this year Ben has said he'd like to try and beat that total. We're doing OK I guess. I took Ben to our local barn owls before dawn on New Year's Day, with his eyes closed UNTIL I spotted a barn owl and told him to "open your eyes now!" so he could chalk up "BARN OWL" as the first bird he saw in 2022 - who else can say that?!

Now, regarding Barn owls - we've (Ben and I) seen both local owls interact with each other at dawn in January. They are using separate roosts at present, mind, about 400M apart. I've also found a new (3rd) barn owl pretty locally too... in pitch black conditions - with my wonderful thermal camera. We are SO lucky to have these beautiful owls so close to us.

NB. More than one person has written to me via this blog, asking for directions to see these owls. If those of you that wrote to me are reading this please know this - I made a terrible mistake of showing one "birder" (shudder) another barn owl roost a few years ago - and instructed him not to tell anyone or disturb the owl. I caught him and one of his "birder" (shudder again) friends sticking a camera into the barn owl's roost a few days later.  I politely (using all of my 200lb and 75 inches) "asked" them to leave and never come back. They haven't been back.  Just as well. So... sorry "birders" who write to me asking for barn owl directions, because of the actions of one of your own (a "birder" that is), I vowed never to tell anyone where certain birds are again. My family know where I watch the owls... and that will be that. Sorry.

Other notable birds for Ben's 2022 check list in  January have been GREAT WHITE EGRET, MARSH TIT, MANDARIN DUCK, GOLDENEYE and GOOSANDER. We've also been lucky enough to see LITTLE OWLS very locally (regular readers of this blog may remember I used to film breeding little owls in 2012 and blog here about them, but they disappeared a year or so after that and up until a couple of years ago, they seemed to be permanently gone - so it's lovely to see them back with us).

We've finished Ben's 2022 list for January on 67 species - with grey and then red-legged partridge. Always nice to see I think. Both birds.

There's really only more thing to say I think, regarding January.

During the summer, I occasionally see a noctule bat hunting in straight lines, high over our garden on warm, still, clear evenings. I'm always excited by that sight. I do happen to know (of course I do) that when we moved here about ten years ago, a colony of noctule bats lived in the roof of an old Scuba diving shop, just up the road.

That Scuba diving gear shop closed down (as it would really... there's not too much scope for Scuba diving adventures in East Berkshire) and became a vets surgery instead. Now... when the surveyors checked the attic of the old shop, they found the colony of bats - and so took the roof off, tile by tile, brick by brick, by hand - as of course all bats are protected species.

This is MEANT to mitigate any disturbance to the bats... but rather like those bumblebee boxes you can buy (no bumblebee has EVER nested in any shop bought bumblebee box... in case you didn't know) ... and the bat bridges that developers are TOLD to erect when they disturb bats (NEVER WORK) this never works. The bats just bugger off and you just have to hope they find somewhere else to roost.... or... yes... they die, to be blunt.

The vets are (obviously) interested in animals, so were probably feeling quite guilty about disturbing the protected and rather handsome noctule bats in their roof... so they put up a bat box on the telegraph pole next door... hoping to attract the bats back.

Look... I don't *know* if the attic bats all decided that this tiny bat box on a telegraph pole was a suitable substitute for their destroyed attic roost, but let's be frank... I doubt it.

I only mention this as I've known that there was supposed to be a bat box by this vets' for a few years (having been interested to know where the occasional noctule above our house comes from) but only looked for and eventually found this bat box this January. 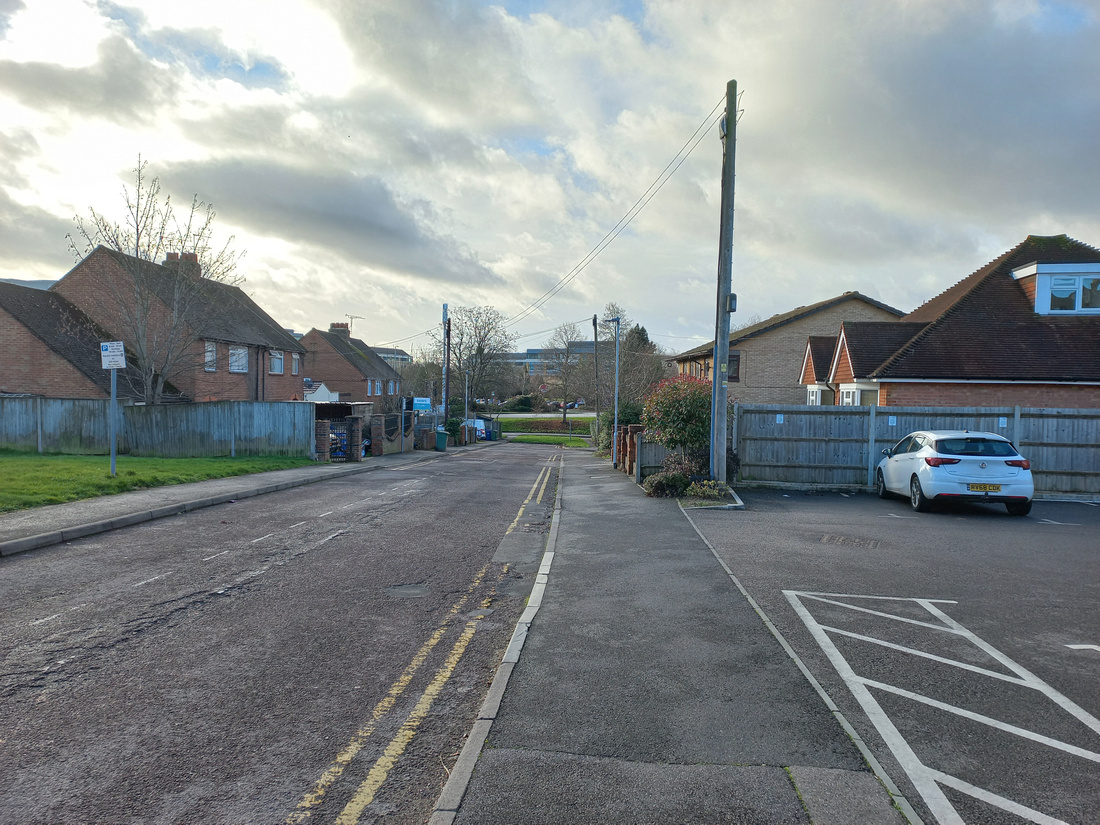 Like I said, I don't think for a second any self-respecting bat would shack up in this rather exposed bat box, next to a busy road... but you never know I guess. I'll have to watch it in the summer, with my thermal camera eh?

Less than 100 days now until the swifts are screaming around our houses again...