A bridge too far?

We’ve all heard of “wildlife corridors” right? Areas of habitat to enable wildlife to disperse and continue populations over a wider area.

Or “toad underpasses”. Man-made under-road tunnels to enable toads to continue to use their traditional migration routes across a road, without being squashed in their hundreds.

Or under-fence tunnels for hedgehogs to move between gardens.

But what about “bat bridges”?

Have you heard of a bridge designed for bats, or for that matter anything that errr.... can fly, like a (durrrr) bird? 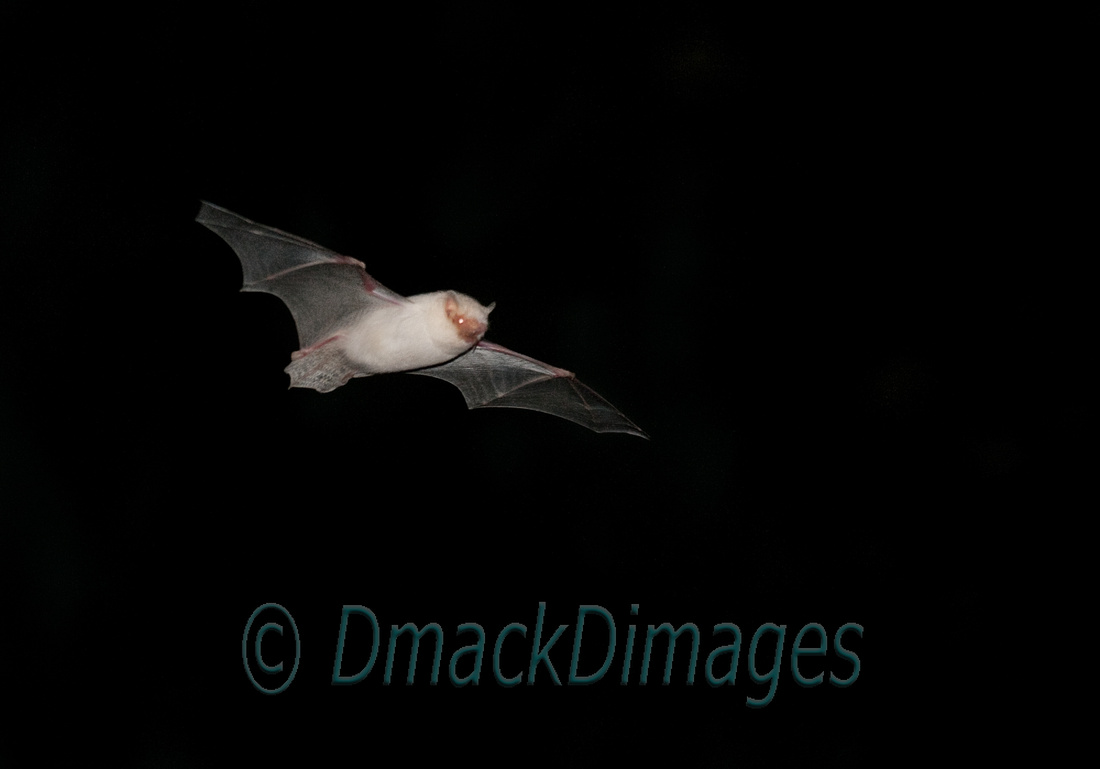 Why on earth would developers or conservationists be concerned with building a bridge for flying bats – are they really doing this?

The answer is yes. Developers ARE building “bat bridges” – and one has been erected a few miles from our house.

My wife, son and I live a few miles from Broadmoor. The (infamous) psychiatric hospital is being renovated and at the same time, almost three hundred houses are being built adjacent to the hospital as well as a relatively large “SANG” (a ‘suitable alternate natural green-space’). This large “SANG” is important as the whole area is also presently home to the Thames Basin Heaths Special Protection Area (“SPA”); internationally important for its ground-nesting birds.

Not only ground-nesting birds it seems. The 150 year old hospital buildings are or were also home to (protected) bats – primarily brown long-eared bats and common pipistrelles.

Work on the dilapidated buildings started last year, but in 2012, before work commenced, as all bats are protected by UK law, ecological consultants tried to ensure the bats had moved out of the hospital buildings into specially-constructed summer nest and hibernation boxes put up in trees around the site.

The plan was to move them out, do the work, and then move them back into bat homes designed within the attic spaces of the new hospital buildings.

I’m not privy to how the move went (it’s a fenced, private development site slap-bang next door to a high security hospital), but one could presume it went well(ish) as two years on, there is a new construction over the access road to the hospital and proposed housing development. A “bat bridge”.

I should point out that this is a locked, secured, fenced, private building site located next door to a high security hospital. I haven't actually SEEN the bat bridge. But I know it's there. (Please work out for yourselves how I KNOW it's there). 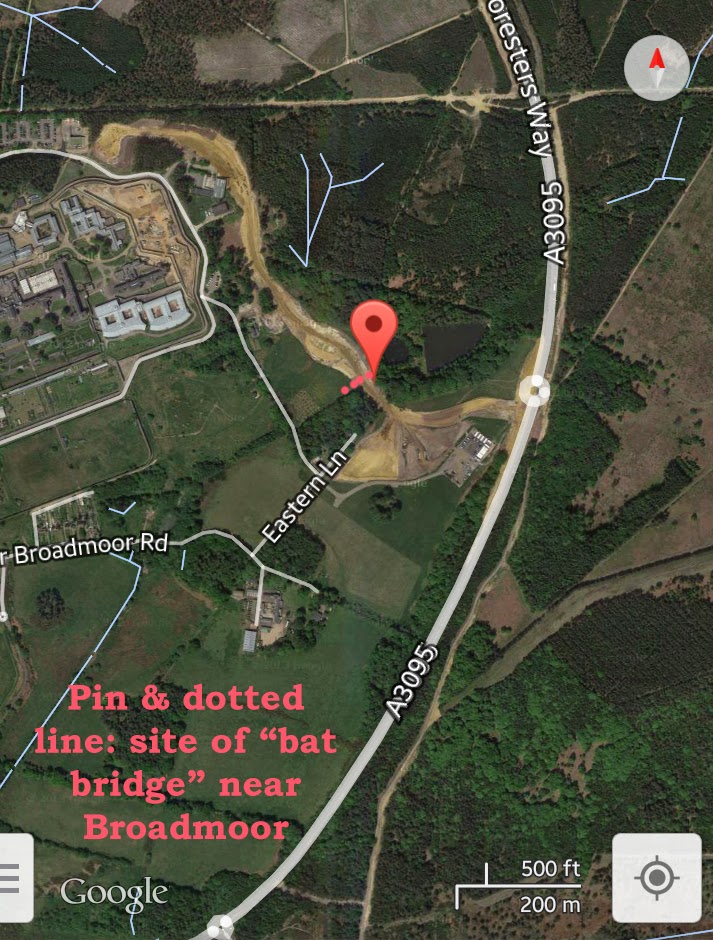 There aren’t many “bat bridges” in the UK. You may have heard of (or perhaps seen) the bat bridges over the A11 (near Thetford in Norfolk), or perhaps if you live in Cumbria or Cornwall or Wales you’ll might have seen the odd one. The first UK “bat bridge” was constructed in 2002 across the A66 in Cumbria and as I write this, there are a couple of handfuls of these constructions across the UK.

The idea behind creating a bat bridge seems to make sense. If the development of a new road means a perpendicular (to the road) line of trees or mature hedge needs to be removed (which was the case for Thetford’s A11 and is the same for Broadmoor), it is thought that any nearby bats become disorientated on their nightly trips out to find food. Bats often use tree-lines or mature hedges as landmarks, along which they move in some numbers at well-populated sites. Bats can and do often fly some miles each night to find food – and use these tree lines or hedges as their own batty roads.

You can see the problem before I’ve written it huh? Take the “batty road” (trees) away, replace with a perpendicularly-sited human road (at a height of an inch or two, rather than dozens of feet high) and you’ve got a confused colony of bats on your hands and a recipe for lots of bats hitting car windscreens.

Bats tend to fly pretty low when hunting – and if you remove high landmarks (such as tree-lines) from their habitat – they’ll move low through the new environment - because they can.

So what to do?

Build a bat bridge of course – a simulated tall hedge or line of trees, across the new road. Basically a thick strip of netting(so bats can “see” it better via their echolocation and birds don’t fly into it and get caught).

Yep. The idea is to build a simulated tall hedgerow or tree-line across the road, where the old tree-line was. The bats think of the simulated tree-line as the old – and continue to fly at the height they always did - higher than the (new) traffic and therefore safe from the unyielding windscreens and bumpers rushing below.

Even if some people don’t think so. 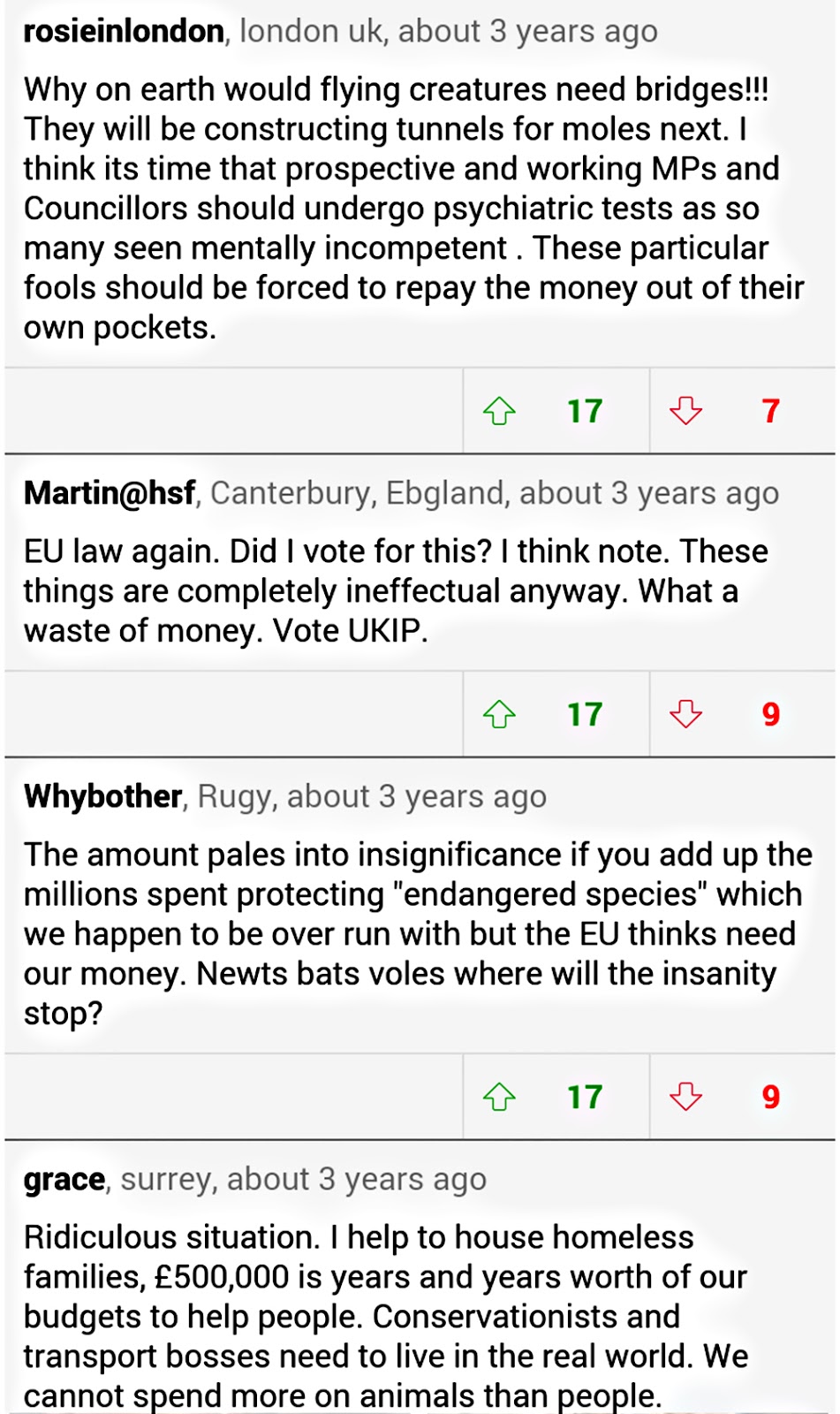 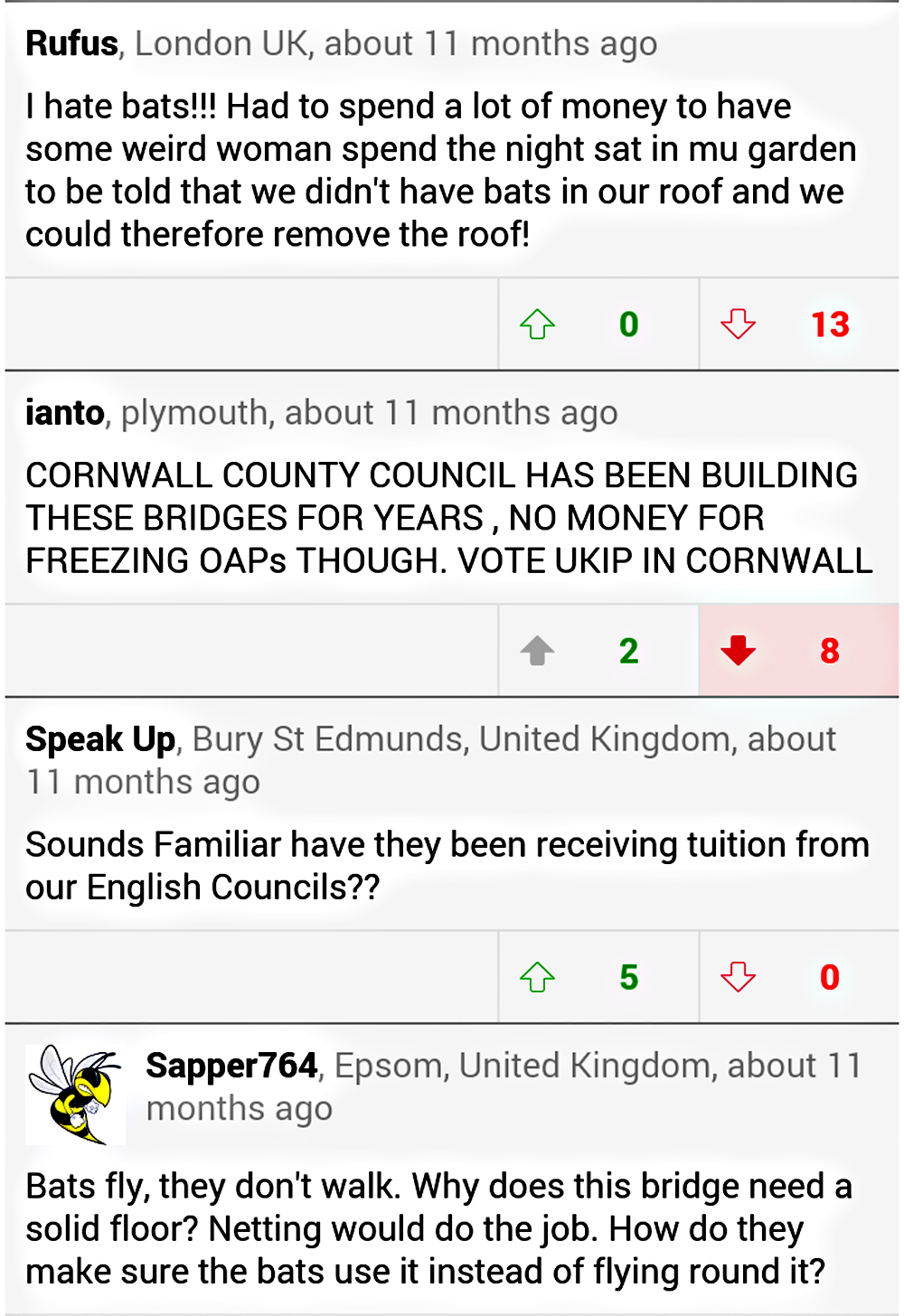 (NB. These screenshots are from a "pistonheads" website (no.. me neither) and the Daily Mail. Don't kid yourselves that "Oh well... that's the Daily Mail readers for you". Like it or not (and I despise it ) readers of the Daily Mail form mainstream British views.)

So is it a good idea to build bat bridges?

A huge amount of money to potentially save some bats, no?

But hey…. The bats are protected species (all of them) and we should be looking after our wildlife, shouldn’t we? Especially wildlife that is “endangered” or “at risk” (population-wise).

John Golds, chairman of Norfolk Bat Group (when asked about the Thetford bat bridge), said protection of bats was a 'social responsibility'.

"We don't know if the bat bridges will stop them being killed in the air stream of vehicles but it's about having reasonable mitigation in the area, said John.

'It's not about saving every last bat, it's about maintaining the existing populations, we've got, as much as possible.'

So it is a good idea to build a bat bridge across a road then, if whilst constructing that road, the developers take down the ancient tree-line used by bats each night, which was running at right angles to the proposed road – and straight across it.

It doesn’t seem like it is a good idea after all.

Permit me to explain…

In 2012, Leeds University carried out a detailed research project into the use (by bats) of bat bridges, gantries and underpasses.

They found that whilst bats used underpasses constructed under the (raised new road) at traditional migration paths (as long as they could fly at a height they had been used to (which meant raising the road, not building a bat underpass under the road, they all but completely ignored bat bridges and gantries stretched across the new road.

But hold onnnn a minute. Is that the only research that’s been carried out into the chiropteran use of bat bridges? Bats may eventually get “used” to the gantry and start using it as a “natural bat highway” after a few years.

The 2012 Leeds study IS the only in-depth study into bat bridges.

And it was pretty darned conclusive.

Even when the bat bridge was constructed less than 15m from the traditional bat nightly migration path, and even if the bat bridge had been in place for up to a decade – up to 96% of all bats (that is to say, the few remaining bats that hadn’t been killed by motor vehicles in the previous 9 years) ignored the bridge and flew low across the road, at the exact site of their ancient aerial path.

At the Dobwalls (A38) site of the (two) bat bridges, the Highways Agency stated that the structures were being used by “between eleven and seventeen bats a night”. Now if we don’t assume those bats will breed and maintain a future population of (more and more) bats – each of the eleven bats using the bridge each night will have cost the taxpayer up to £27,000.

In a nutshell… whilst bat bridges seem like a good idea – they’re really not.

The trouble for developers (and therefore the Highways Agency) is that bats stubbornly keep to their exact old paths. At a height they can fly at (low, if their old trees are removed). They’ll not even deviate by 10m left or right to cross the new road, even if a bat bridge is built so close to their old nightly path.

You might then argue that all bat bridges should be built at the EXACT spot of their old paths – that might help huh?

To be honest – probably not – and to get the construction site EXACTLY right (with very little guarantee of success indeed) would make the cost of the eventual bat bridge much higher than the hundreds of thousands of pounds they cost at present.

It’s not often I link to the BCT (not the most effective conservation organisation I’d “politely” suggest) but even the BCT (Bat Conservation Trust) doesn’t appear to think they (bat bridges) work.

Bat bridges are not the answer then.

And yet the Highways Agency (and developers) are still building them. The most recent being the “Broadmoor bat bridge” near me.

So what is the answer?

Three answers spring to mind – but all would be incredibly expensive (based on a pretty simple bat bridge construction costing £50,000+ on its own).

1 – Any new road that MUST cross an ancient line of trees which forms a bat migration route should be raised and a bat underpass should be constructed below, to enable the bats to cross under the new road safely and at a comfortable height they would use.

2 – Any new road that MUST cross an ancient line of trees which forms a bat migration route should be tunnelled deep underground at that point.

3 - Any new road that MUST cross an ancient line of trees which forms a bat migration route should be re-routed, to avoid such traditional bat paths.

In each of the suggested solutions above, the remit (save the protected bats) will probably be met. At a huge cost.

In the current situations, the remit (save the protected bats) will certainly not be met. At a huge cost, albeit at less cost than the numbered solutions above.

There is a fourth solution of course.

Build the road where you like and don’t even try to mitigate the effect on bats (deaths) by building anything batty (a bridge, a gantry or an underpass).

At least that’s free – and it seems like it has the exact result of building bat bridges after all. (That is the death of most of the bats anyway).

There is a lesson to be learned here.

A. Most of Britain doesn’t give a hoot about wildlife. It’s depressing, but it ‘dee troot’ I’m afraid. And even if these people do ‘like’ some wildlife – it’s more likely to be dolphins and tigers and polar bears than toads or bats or other nocturnal “creepy crawlies”.

B. Don’t be fooled into thinking that’s all well in the bat conservation world, if you see these bat bridges on your car journeys around Britain. All is not well. These bat bridges are a “tick box” exercise, designed to (at least) placate conservationists. They don’t appear to work at all and need a LOT more research into design and exact locations before we should construct any more.

C. If we really want to conserve wildlife, (the majority simply don’t – see point A. above) we will have to pay for proper conservation. And pay handsomely. How about a 50% increase in your council tax. Just for conservation.  Or how about a doubling of your price of all your food in your shopping trolley each week? Just to ensure farmers can run an efficient, money-making business AND conserve wildlife. How about paying conservationists and research staff a real salary (rather than the pitiful wages they’re on now – several thousand times less than a city trader for example, whose day job (after all) is simply to gamble with other people’s money).

Perhaps I may have exaggerated the money aspects in point C. above, but we really do need to pay for conservation. 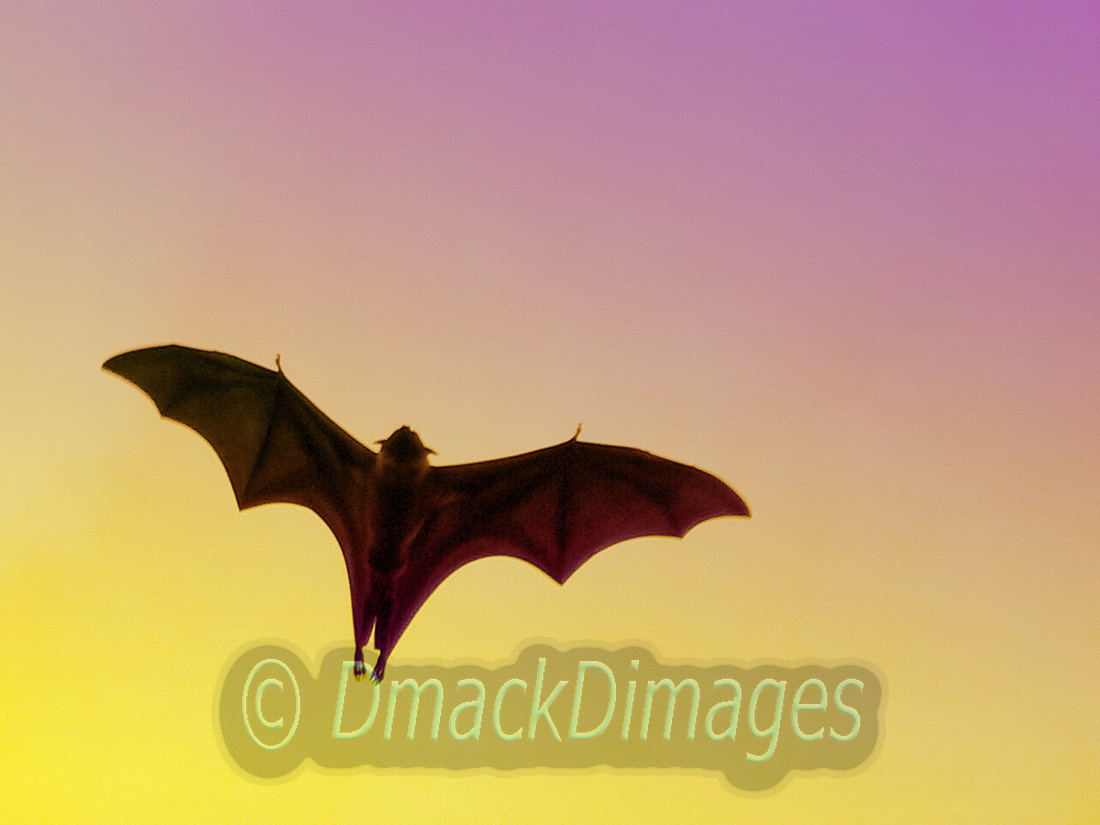