Someone suggested to me yesterday that my opinion (here) of the winning image in this year's Wildlife Photographer of the Year competition might have been a little harsh. A tad unfair?

I stand by it though.

I think that if camera trap images are to be allowed in WPOTY, then put them all in their own category. You could call it the errr.... "camera trap category" if you like (you can have that for free).

But I don't think the grand winner of the most prestigious wildlife photography competition in the world should be picked from the "camera trap" category.

So then. A few (more) explanatory notes for you, which might explain my itchiness at awarding this particular image (good though it is) the grand title...

I see in the accompanying blurb to the image, the photographer allegedly scoured the Siberian forests for ten months, in a bid to find the best place to leave his camera trap (note the singular nouns here... place and camera trap, not places nor traps). 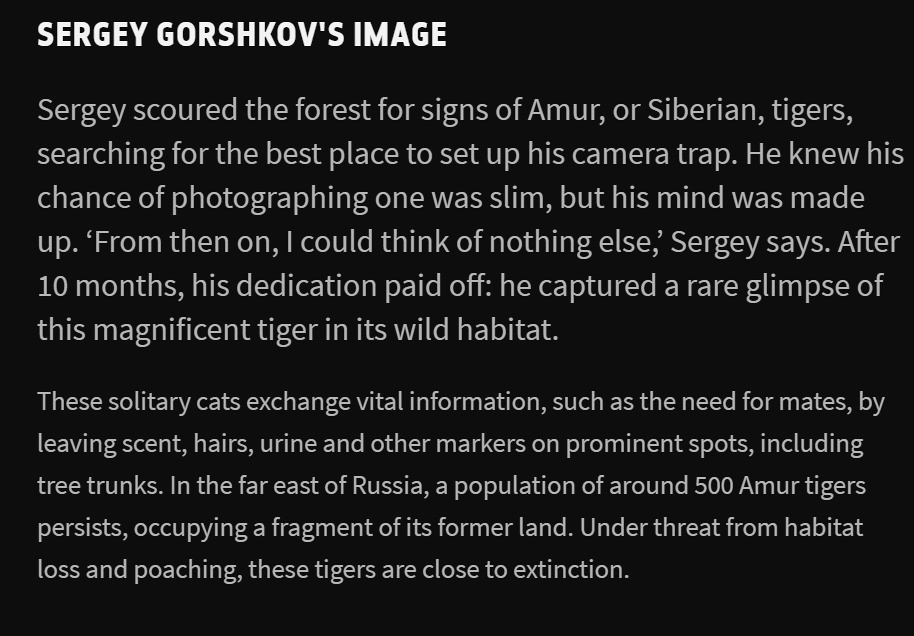 Then look at the photo below, of Serge, the photographer, setting up his camera traps. (Plural).

There are 6 camera traps in this photo. And these are the ones that we can see. There may be more. 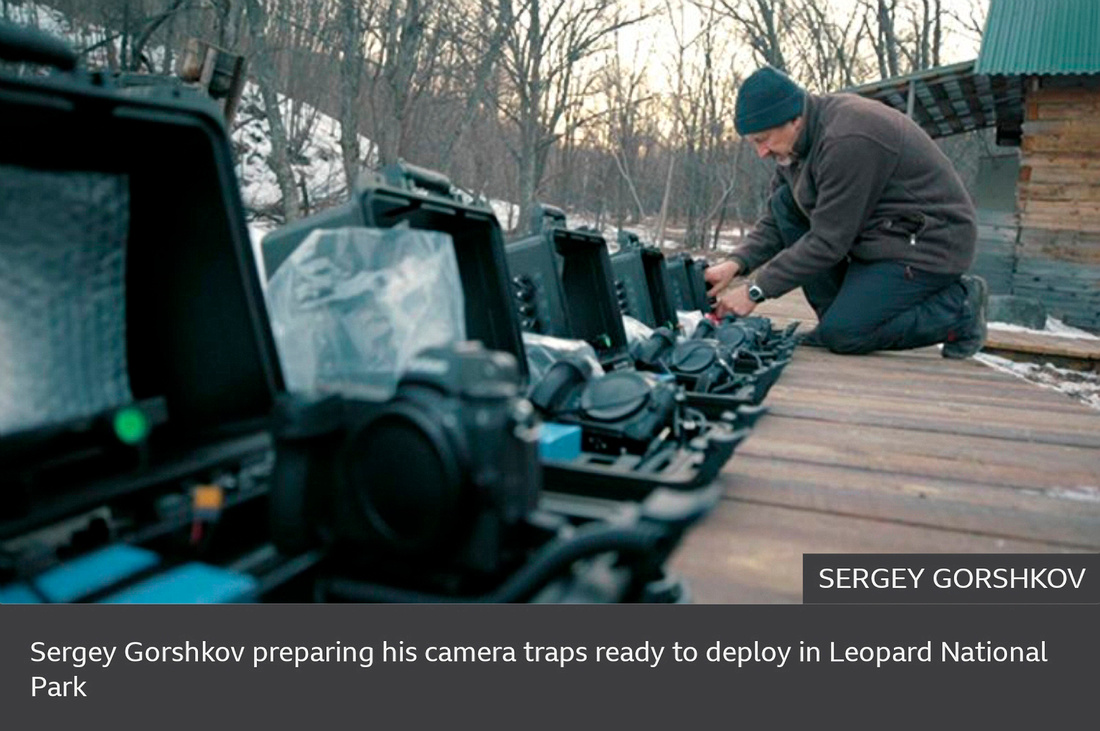 "He (the photographer, Serge) knew his chances of photographing one (a tiger) were slim..."

I'd suggest his chances were actually pretty high, considering he had multiple camera traps to work with, in a national park (admittedly a HUGE national park) that is well researched and documented (in terms of Amur tiger and leopard movements - the rangers KNOW how many cats are in the park and where they are often likely to be - in fact I'm sure (I can't (re)find the link right now) that the tigress he photographed is named and numbered. The rangers know them).

Each camera trap set up (that's EACH ONE) would cost the average punter c.£3500 here in the UK.

Serge has six in the shot above.

So that's £21,000 of kit right there in that photo above, laydeez and gennelmen. (Although admittedly for 6 cameras, that's pretty cheap these days!).

Which he will leave in 6 places (I'm giving him the benefit of the doubt here and limiting his arsenal to 6 cameras although he may have more) to try and get the money shot that he wants. And if he failed at those six places, then he'd try another 6. Etc etc etc. He'd have the rangers' experience to draw from, to find places to leave his cameras. As well as his own, of course. But remember, the rangers have numbered these cats. They know them.

And then, after all that... he'd be reliant on the light being just right (unless he uses  expensive wireless flashes too) to get the photo(s) he wanted as the big cat took its own photo when it broke one of the infra red trigger beams.

I think the photo is perfectly fine.

Another commentator suggested the power behind the image was in the fact that it made the onlooker desperate to save the world's wildernesses and the wonderful wildlife in those places.

MOST wildlife photos make me think that!

But to have it win and perhaps to suggest it took REAL skill and fieldcraft and god-like patience and then finally, swiftness of technical finger out in the field, with just one millisecond-long chance to get it right (like many wildlife encounters with camera)?

Enough of the negativity. I know I'm barking up the wrong tree (pardon the pun) with trying to tell the UK public that a photo of a furry tiger hugging a tree isn't "all that".

You love it and that's fine of course.

I'll toddle off now and promise you that the next blog post I pen will come around the time the clocks go back - when we all feel a bit down - and will consist of a fair few summery photographs that I took with my wife and boys this summer (often during lockdown).

Maybe that will balance this moany post out and lift our spirits somewhat. I think we may need it this winter...