What is YOUR first thought on seeing this image? 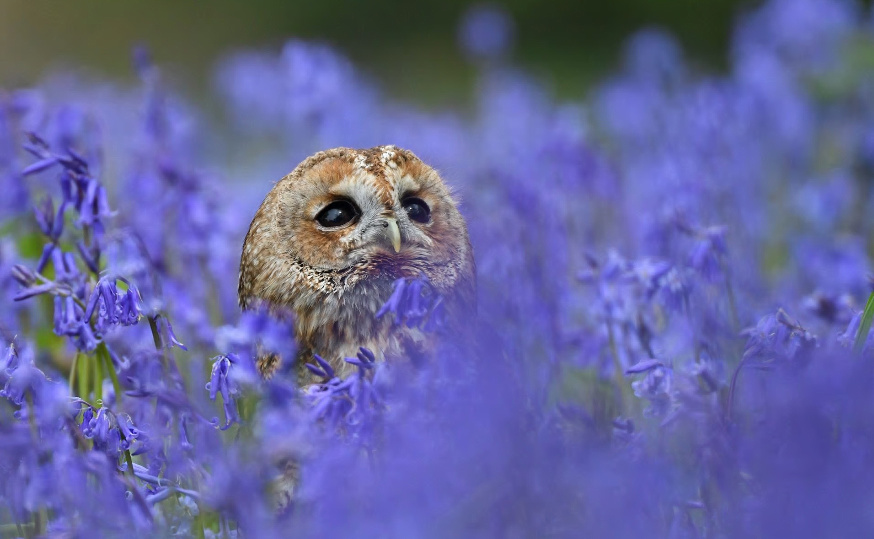 Be honest now and please quickly answer (without thinking too much)… this question.

What's your first thought on seeing the image above:

a) What a lovely owl.

b) What a lovely owl in a lovely field of what? Bluebells? That's a great photo! Superb!

c) What a pretty picture! I love it!

d) What a marvellous photo. How on earth did the photographer get this photo? Stunning job!

e) Oooh! I bet that owl has just caught something, as it's on the ground. Great shot!

Was your first thought on seeing the image above...

1) That's a nocturnal (black rather than orange or yellow-eyed) tawny owl, photographed from a perfect viewpoint (blurred blue of bluebells creating an aesthetically-pleasing soft blur of colour to the bird portrait) at a time of day (the tawny owl is STRICTLY nocturnal) when it should be asleep in a hole in a tree in a perfectly-lit colourful habitat in April or May (flowering bluebells) when it should almost CERTAINLY be hidden in a hole in a tree because it would probably be at the end of its breeding season - and pretty knackered to boot. Not only that but the owl is looking up into a milky sun (partially covered with a decent layer of cloud). You can see that reflected in the owl's black eyes.

In short... this is clearly an image of a kept bird (in this case a tawny owl) at a photography day or event or workshop in the UK (bluebells).

Which is fine. I suppose. Although a little problematic for me, if I'm honest.

Firstly it has been entered and shortlisted in the annual SIWNP (Society of International Wildlife and Nature Photographers) Bird Photographer of the Year 2019 competition. 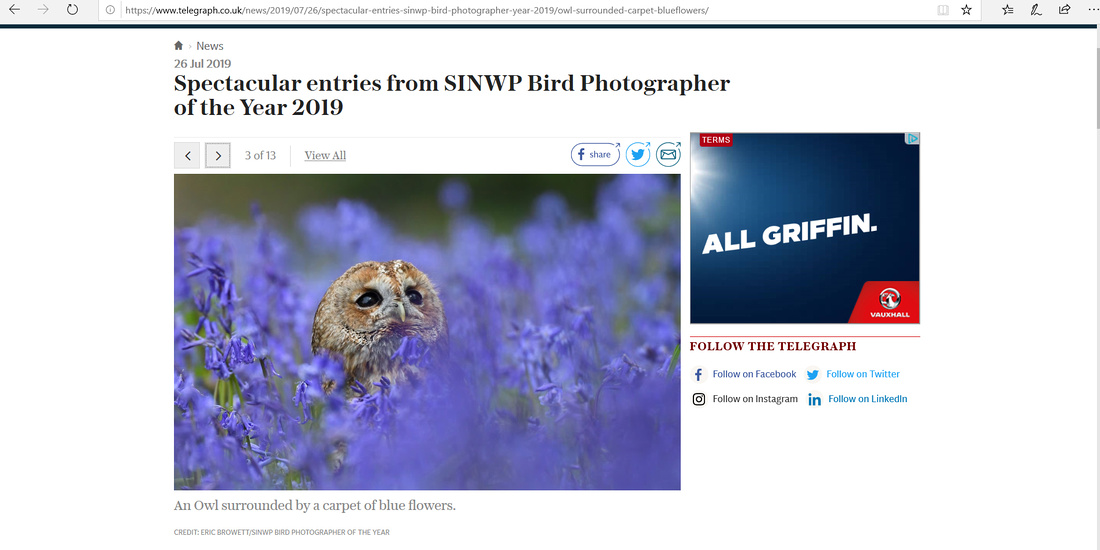 And that's fine too. Sort of. In this case, in this competition at least. 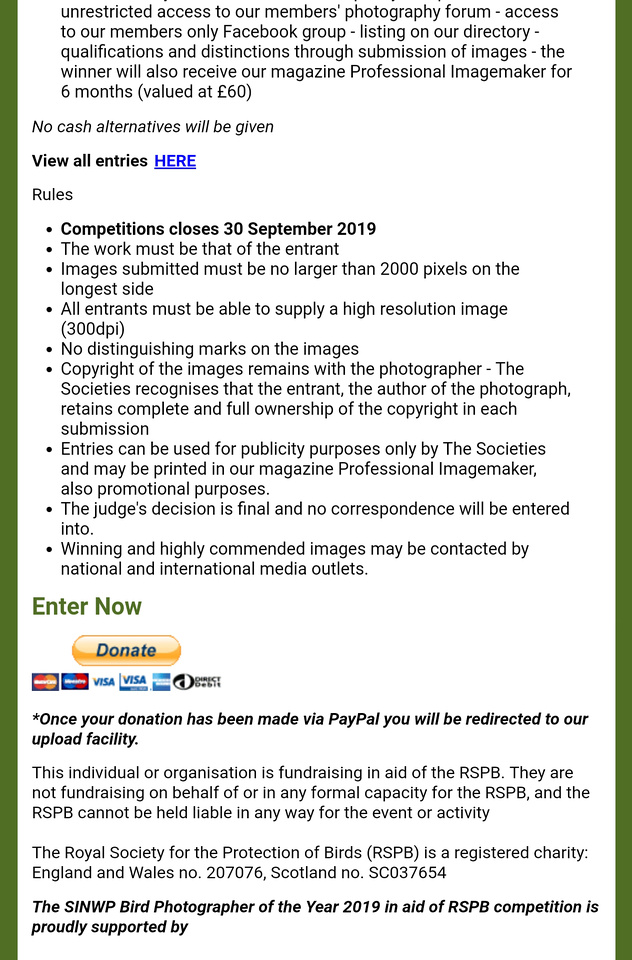 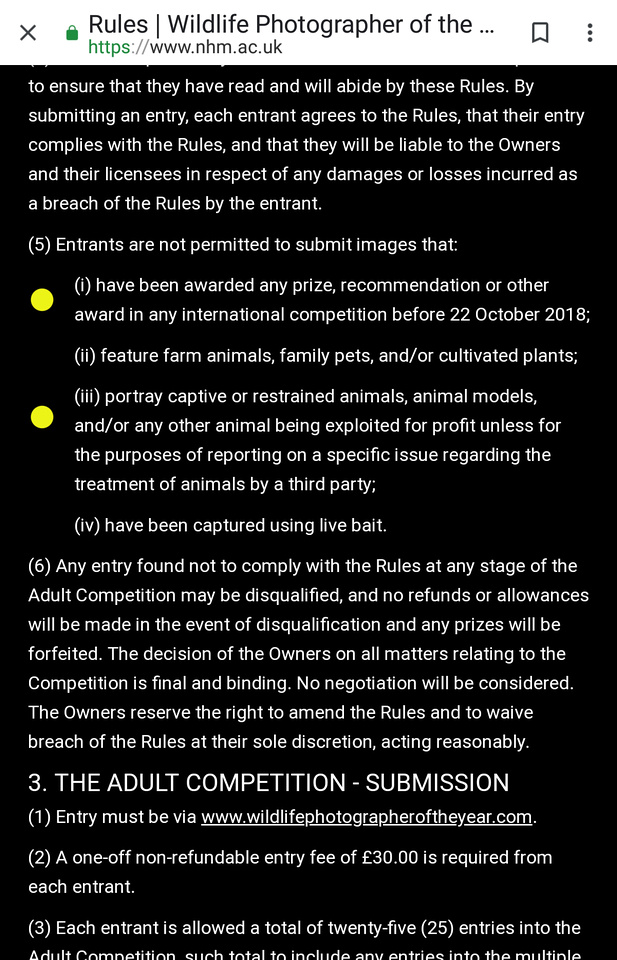 And yes, the BWPA has had its detractors over the years for seeming to be pretty clearly biased (in terms of awarding prizes to images) towards known and or professional photographers' entries (not anonymous entries) over and above equally (or more in some cases) competent amateur or unknown photographers' entries, but at least it seems to value its integrity as a WILDLIFE photography competition rather than a money-making-machine for the RSPB amongst others, like the SIWNP competition.

A glance at the entries in this year's 2019 SIWNP bird photography competition demonstrates that many of the entries are of captive birds. A shame I think.

The very prestigious International Bird Photographer of the Year Competition (BPOTY)  (certainly far more prestigious than the SIWNP) stipulates (see below) that if you are to submit entries of captive birds, then you should at least admit that. 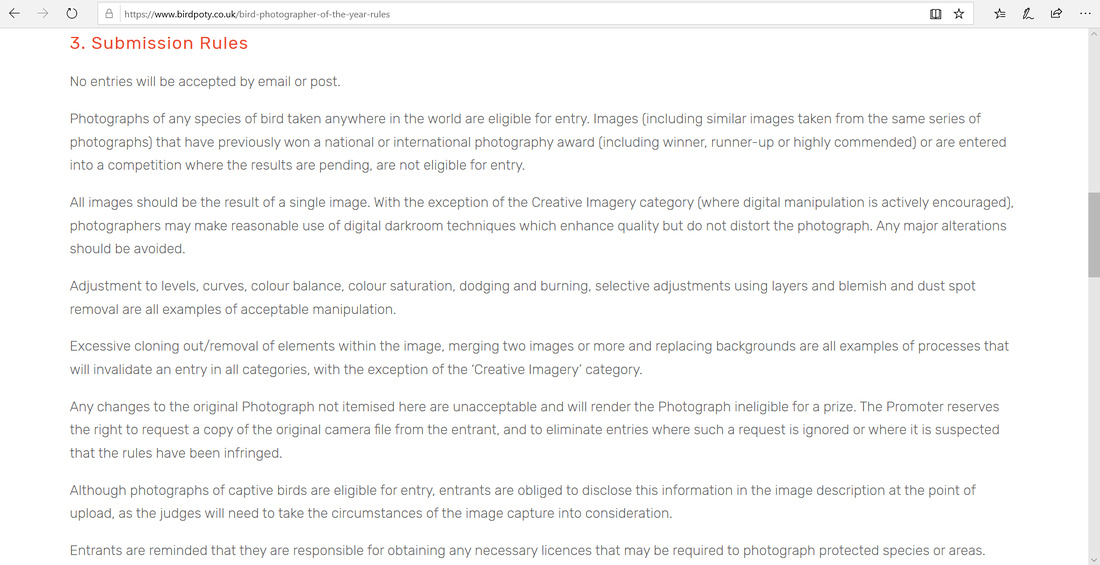 So at least the photographer of the owl in the bluebells shot has entered it into the correct competition. The "wildlife" photography competition that DOES accept photos of captive birds and trained birds and model birds.

So why is it slightly problematic for me?

1  - I'm really not sure a nocturnal owl should be trained to fly during the day and pose for paying photographers. There is a REASON why the tawny owl has big, inky pupils (black eyes, rather than yellow/orange eyes). The same goes for many other nocturnal birds/animals. Each time I see a photo of a nocturnal animal in the day, my first thought often is either a) The poor thing is ill/stressed or b) The poor thing is kept/trained.

2 - If you bill yourself as a "wildlife" photography competition, then I think you should be obliged to only accept photographs of wild animals. Not images of kept animals and birds on photography days that are designed to make the final image look as natural (and wild) as possible.

3 - Many (most?) people, if they're honest, would have firstly, simply thought "what a lovely photograph of an owl in bluebells" when looking at the first photo of this blog post. These people might then come to my (or many others') websites and think... " Well... these images are OK, but NOTHING compared to that lovely bluebell owl photo that I saw the other day and I think should WIN the wildlife photography competition it's been entered into". That is to say that false expectations are put onto the whole field of wildlife photography, with "wildlife" photographs like this.   This is the entire reason that I write "All my wildlife (fauna) images on this website are of truly wild animals - not captive or tame animals." on my about page, on this website.

4 - Linked to 3, above. The majority of the wildlife photographer's skill comes BEFORE the shot is taken. Learning about the animal's behaviour and habitat. Getting close to the animal, whilst respecting the animal's welfare and of course the law. FIELDCRAFT. All this takes real effort. Time. Patience. YEARS of work. And it's a real skill. Rocking up to a bluebell field with a van full of owls hugely detracts from that - and the end result is DESIGNED to do that. 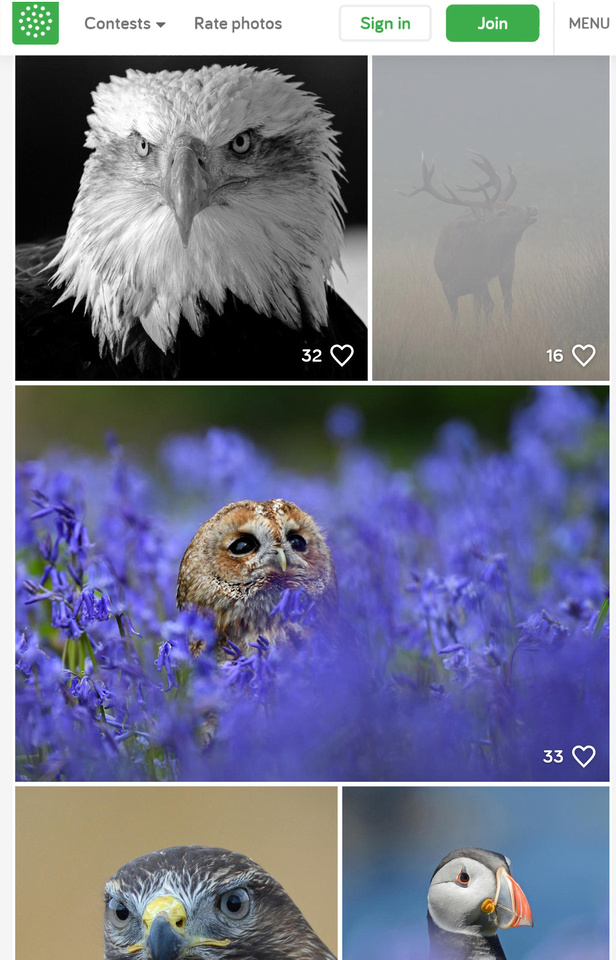 and at least he's generally honest about his photography workshops. Most (almost all it seems) of his bird of prey photographs were taken on photography days, with trained birds. He's been honest about this most of the time, explaining that he even cropped out jesses and falconry paraphernalia to make the birds look more natural or wild). Hell or Heck (as Americans might say) he's even uploaded a photograph OF an (owl) photography workshop, in Slovakia I think, onto his website. But as I've explained (at length, sorry!) above, I'm just a bit, more than a bit to be honest, uncomfortable with this method of taking "wildlife" photographs and then entering them into "wildlife" photography competitions. Frankly I think it's a con and a cheat and damaging to working, REAL wildlife photographers... and although this particular photographer is relatively honest about his methods (if you look at the "story" details of his images), many, MANY others aren't.

A trained, or kept, or even (semi) domesticated animal doesn't mean "wildlife" to me.

And the trouble is, for me, once I see that several dozen or several hundred even of your thousand images of "wildlife" on your website are of "kept animals" (even though that might not be clear nor even admitted), then I'm not sure that I can believe that any of your "wildlife" shots are truly of wild animals. Animals that you got the shot of thanks to your fieldcraft and skill and time and effort, rather than a hundred quid and an hour in a car.

That's all for now, grapple fans.

I'll leave you with a few (a lot) more photographs from this photographer's generic website and after each one (or set) I'll give you a line or two of my immediate thoughts if I was to see these entered into any future "wildlife" photography competition.

Have a lovely weekend. 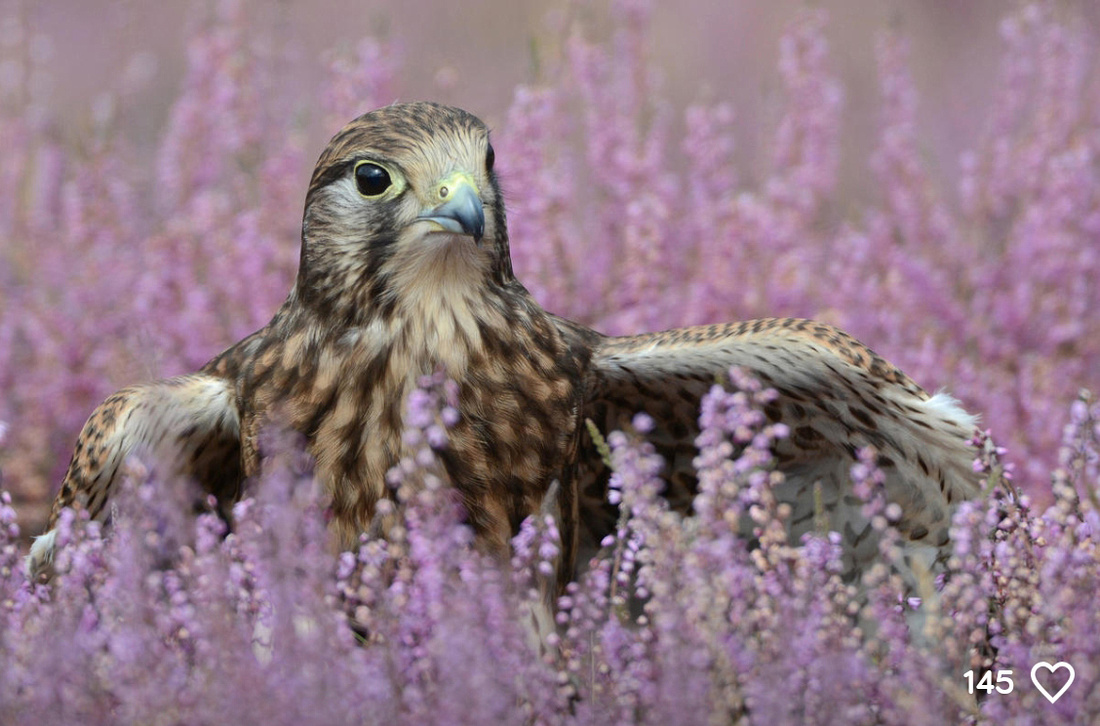 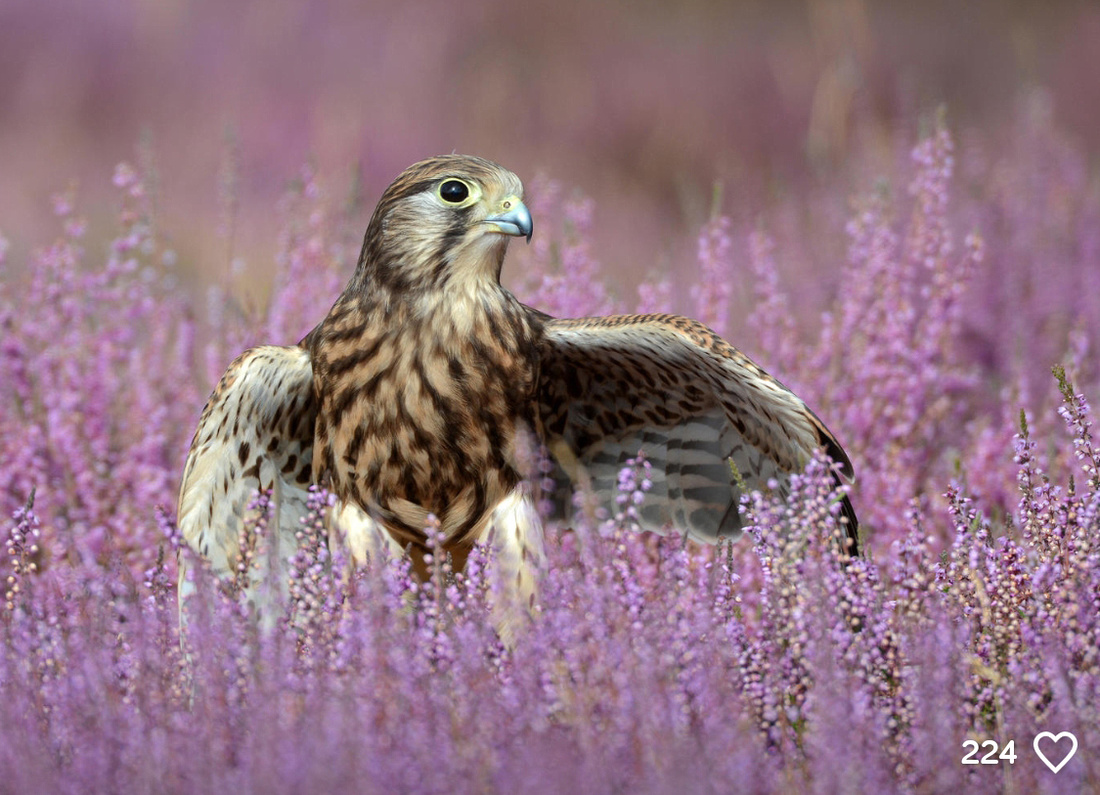 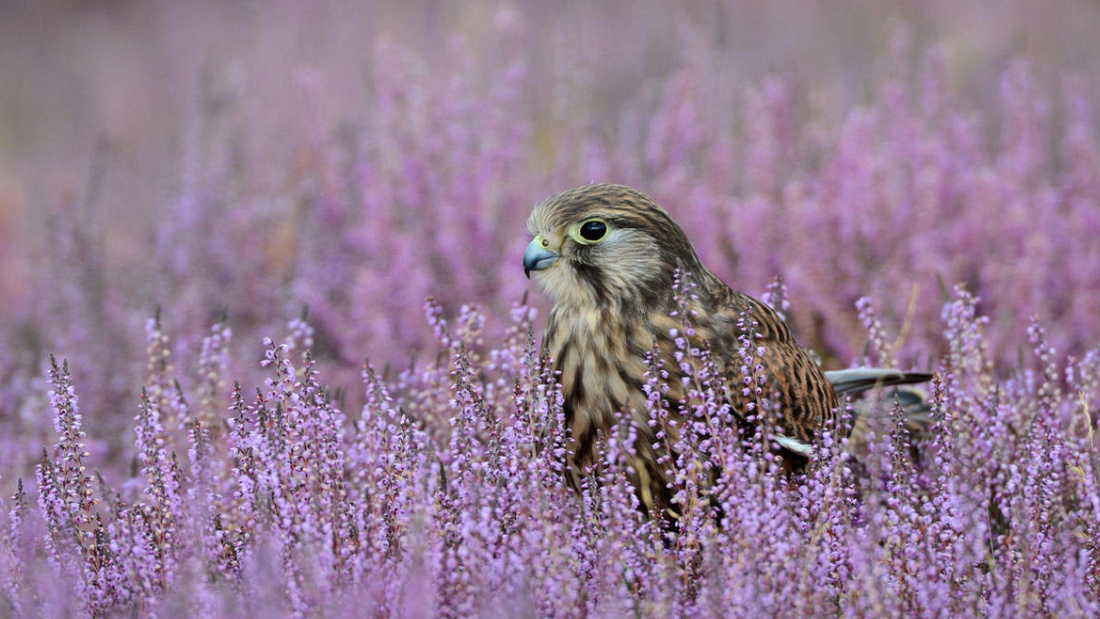 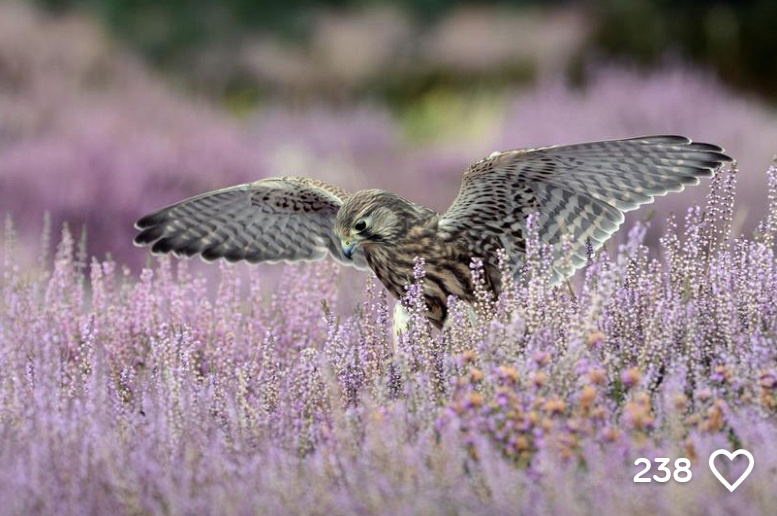 Above, four photos. Same bird (female kestrel) taken at same photogenic spot, from different angles, relatively close-up, in the right month of the year (almost certainly August), with the legs of the bird hidden (and therefore any jesses too). Workshop photo (as thankfully the photographer does state if you click these images on his website and read the story behind the image). 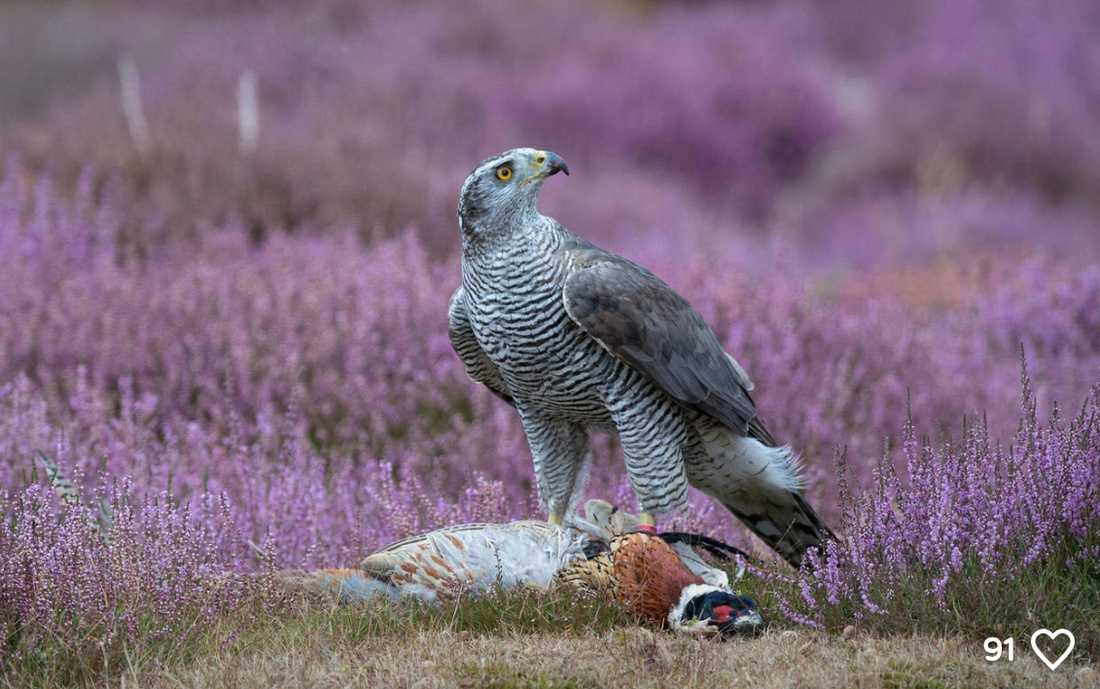 Above. Wow. The photographer got a photo of a woodland specialist (goshawk) on a pheasant in the same heather field as the kestrel shots above, in the same month!  This (already dead) pheasant is bait therefore, and the (red-ring on leg) hawk is kept. (Again I think the photographer was at least semi-transparent about this shot). 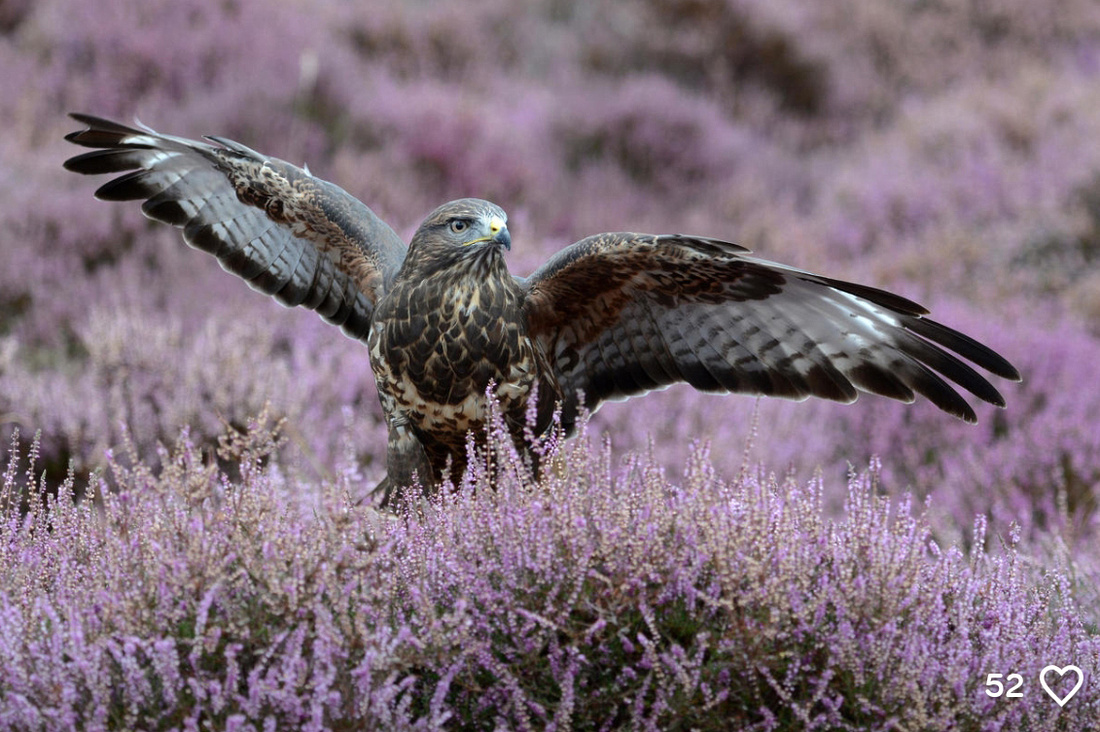 Above. Righto. A buzzard now too. This is a van full of birds isn't it? 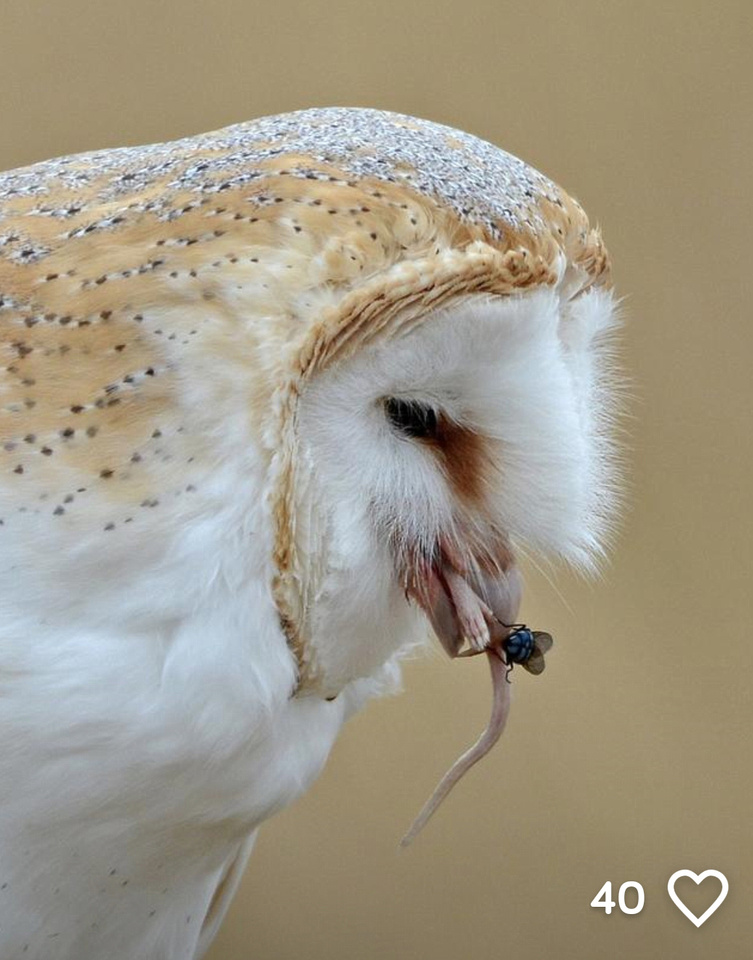 Above. This fly shows that this is a long-dead mouse, a (frozen) 'pinky' as falconers call it, being fed to a captive bird (barn owl). Finally, above, a nocturnal (tawny) owl perfectly-posed in SUNLIGHT by a perfectly-still pond, at the perfect, colourful time of year (orange autumn foliage) means this is a staged shot, at a workshop, where I'd suggest the welfare of the owl is not being prioritised.

Just in case there's any confusion here, all the photographs of birds on this post are copyright this particular photographer (who I'll not name here - that name is easily found online). This chap is at least generally honest about the photography workshops he attends. Most (almost all it seems) of his bird of prey photographs were taken on photography days, with trained birds. He's been honest about this most of the time, explaining that he even cropped out jesses and falconry paraphernalia to make the birds look more natural or wild.

Many others aren't that honest though.

Filbert Cobb(non-registered)
"Photoshop!" I thought. In reality, as I am a poor man, Paintshop Pro. No matter, look, fakery nonetheless. Excellent blog - I've often wondered ... . Great recent blog about the French lavender farm, too - even if they were growing English lavender - nothing excuses such dismal behaviour. But I digress - fakery is the reason I don't watch the Fakewatch programmes on the telly. I am surrounded by Wols and have been for 12 years. Once I watched a Little Wol feeding off a fence post 15' from my sofa. Once there was a pair of Tawny wollets wheezing all day up an Ash tree. Note the two onces in 12 years - Wols by day is a rarity. Power to your elbow in calling out this Fakery epidemic.
No comments posted.
Loading...
Subscribe
RSS
Recent Posts
Hornet moth natural histories A wonderful wildlife and weather weekend. Today's partial solar eclipse. PHOTO. Another. A,B,C and D Crewe Station. Three little birds. Revealed. Three little birds. Thirty-five years. A teaser for you - the answer. They're back!
Keywords
little owl Operation noctua swift hedgehog fox barn owl buzzard HD video kestrel swallow
Archive
January February March April May June July August September October November December
© Doug Mackenzie Dodds - Images
Powered by ZENFOLIO User Agreement
Cancel
Continue