I read yesterday in The Independent, that a cocker spaniel swimming in a duck pond in Dublin (exact location below) was killed by a swan protecting its cygnets. 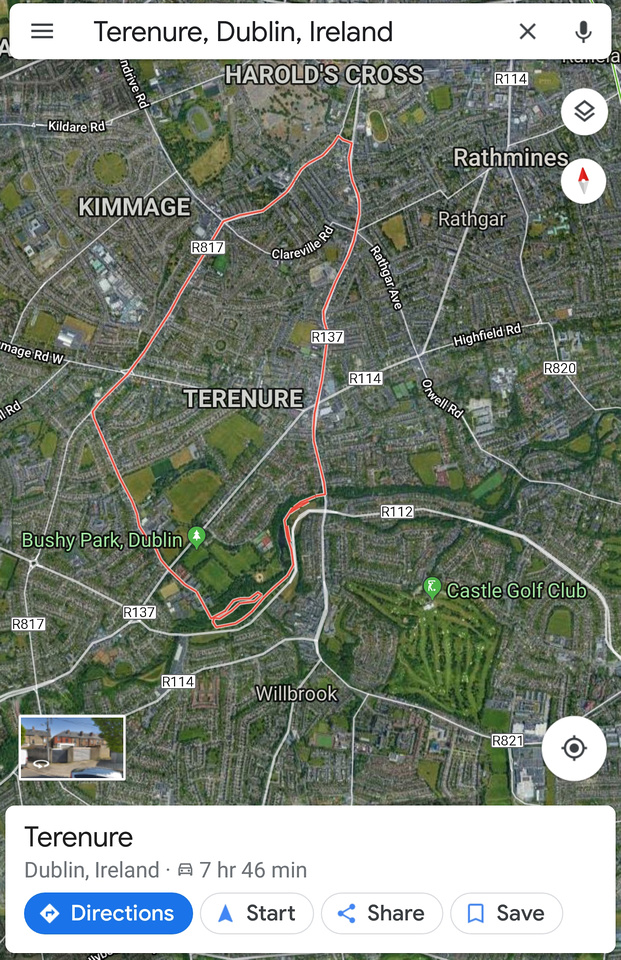 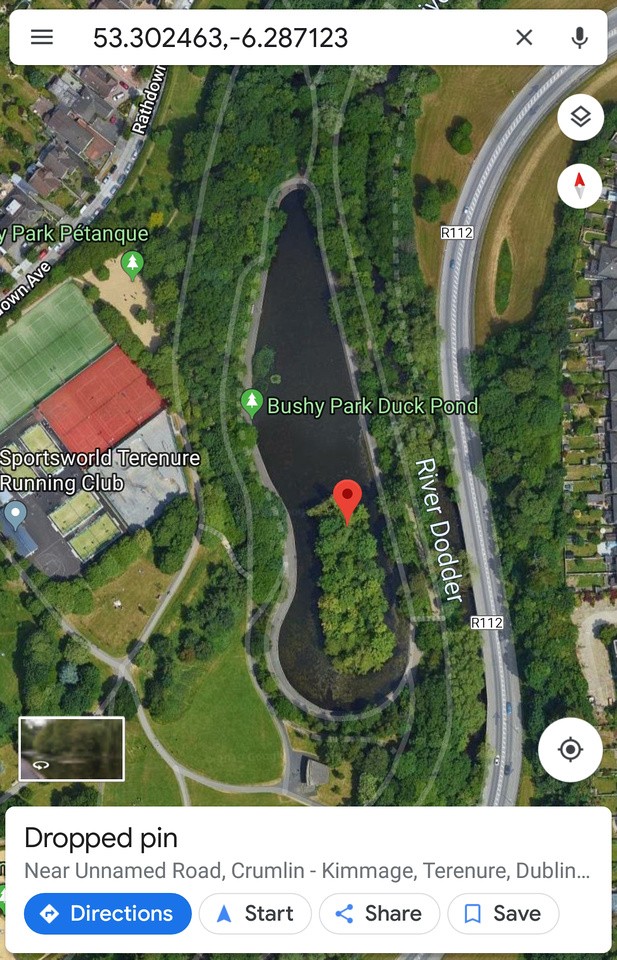 Cue outrage and horror from our dog-obsessed nation.

I'm afraid I read the piece in the Independent, originally reported in the Irish Times and laughed. (I know, I know... I couldn't help it).

"The man said the swan attacked the dog, beating it “with one wing and then the other”.

"He said: “That stunned the poor thing. Three or four more slaps and she was gone.”"

"The owner was so distressed, his phone fell into the pond, he added."

Just made me laugh.

To be honest, it's the funniest tit bit of news I've read for months.

I actually guffawed with laughter on reading it!

NB. The rest of this blog post contains offensive language and may upset some readers. It is printed below, but typed in a white font. If you wish to read it, you'll need to copy the post from your PC, paste it into a word document, and change the font to black. If you can.

No. I'm not going to apologise for laughing at the story. If it was a human that had been beaten to death by a big swan protecting its cygnets I probably wouldn't have laughed... ('probably' being the key word there), but this was a shitty little cocker spaniel - let off its lead near breeding birds.

I regularly take 5 mile walks around the local area to keep my back strong - and if I'm not barked at or gone for or jumped on or all three by dogs let off their lead by their shitty-little dog walker owners, I've had a successful walk.  It's got that bad recently that I was walking around our local meadow, looking at the flowers and dragonflies and kestrels and seeing whether my eldest son's beloved cows had been returned to the field and I was jumped on and barked at by ALL THREE dogs I walked past on my five mile walk. 100% strike rate.

The crap these owners come up with too. It's so tedious.

"Ohhh don't worry... he won't hurt you" they whine, as their German Shepherd puts its paws on my shoulders and barks at my face, covering me in dog shit and saliva.

Well.... I grew up with dogs. I don't like small dogs (they, like ALL (yes... ALL) their owners are pathetic little runty things). But I DO like big dogs.

BIG DOGS THAT ARE TRAINED TO BEHAVE that is.

Big dogs that the owners can and DO control.

But I haven't seen any of those dogs recently.

I'm not sure if they exist now - or they're all actually working dogs.

The Irish times went on:

“They need to put up signs telling people to keep their dogs on leads around the pond. The swan was just protecting its cygnets.”

"The incident occurred shortly before 11 am, at a time when dogs are allowed to roam off-lead in the park, which was busy at the time."

In my recent (and when I say recent, I mean in the last four decades or so) experience, it matters NOT A JOT if you put signs up on land, saying "Please put dogs on leads. Livestock present (Or ground-nesting birds present in this area" etc.

The dog owners, who are ALL (yes, ALL) controlled by their dogs it seems, regard it as their (more specifically their dogs') absolute sodding right to be let off their lead and run around scaring livestock or ground nesting birds such as woodlark and nightjar.

I (especially) but also my wife (occasionally) have gone up to people whose dogs (often plural) are off their lead in an "ON LEAD" area (with signs everywhere) and the saliva-spraying indignation I've (we've) been met with is something to behold.

Two years or so ago, I did so at our local lowland heath nature reserve, where woodlarks and nightjars DO nest on the ground at this time of year, my wife and I and our eldest boy were walking along a boardwalk 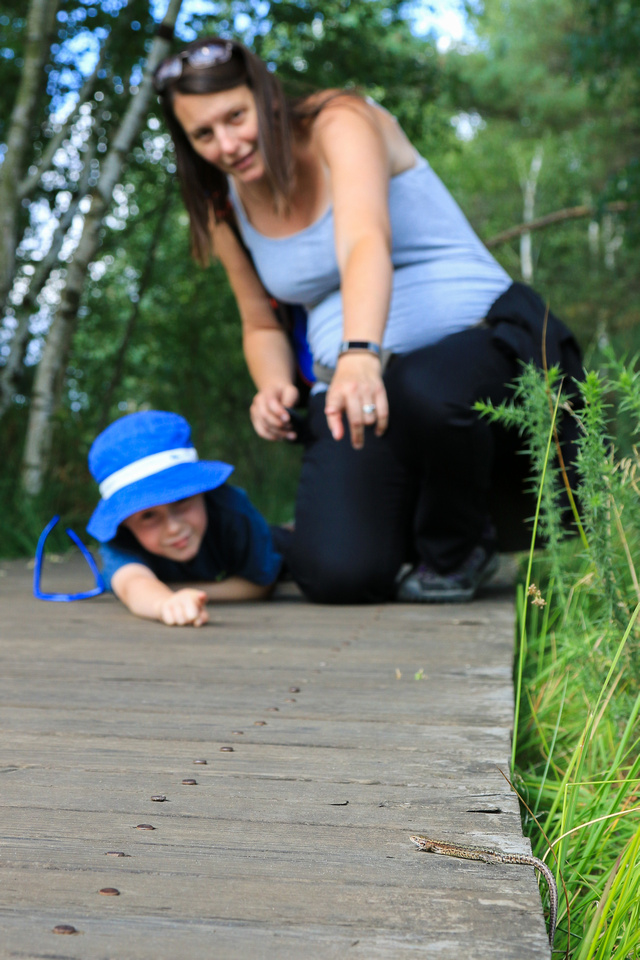 through the heath - and a huge great Alsatian came racing down the boardwalk, baying. I pulled my son into my arms and turned my back on the dog. And waited for the owner. The dog ran a few rings around me and then bounded off into the heather, scattering lizards and woodlarks and wasp spiders and nightjars and silver-studded blue butterflies and golden-ringed dragonflies and tiger beetles etc etc...

The owner walked up the boardwalk after his dog about twenty seconds later, with the usual icy-cold torrent of drivel issuing from his mouth.

"Sorry mate. He won't hurt you. He's just being friendly!".

I put my son down, walked up to the Alsatian's owner and quietly said:

I assumed that particular dog owner doesn't get challenged much - he was a VERY big bloke with a VERY big dog - but again, none of that really matters to me. Never has.

The bloke's eyes went like dinner plates as he stuttered and blustered and professed what he was doing was fine and I was in the wrong.

I just looked him very, VERY coldly in the eyes and said.... very quietly...

And I walked away. (I was, in effect, just protecting my cygnets).

This is not a rare occurrence for me.

And this was on a nature reserve with signs EVERYWHERE, telling people that rare birds were nesting so please keep your dogs on a lead and under control.

Dog owners in general (and let's not muck about - it's NOT the small minority) are pretty terrible at all this.

They let their dogs off leads when they are TOLD they shouldn't. They whimper to walkers, joggers and anyone else around that their dog that just noisily covered them in shit and mud and drool is "just being friendly". They think it's fine for large dogs to run at small children because "they're jussst being frrriendly!" They allow their dogs to crap and piss everywhere and only pick up their dog sh*te WHEN people are nearby. Watch out for this when you're next out and about - watch for a dog to start crapping - and then look at it's owner. Very often the owner will immediately look around the vicinity - to see if anyone is around and has seen their dog starting to crap. If they notice you, they'll visibly sigh as they then realise that this time, they'll have to pick up their dog's freshly-laid warm turd and put it in the plastic bag that they've been carrying around with them for months now. Of course they'll walk away with the bag, around the corner and toss it into a bush - where it'll hang off a branch for the next ten years.

I say good on you, swan.

That's one for all the other swans, geese, ducks, woodlarks, lapwings, partridge, nightjars I say.

Now, if (as a dog owner) this blog post offends you …