Lots of news in this penultimate month of the twelve “800 yards of ‘mac” blog posts – good news and bad.

Firstly, as we head into Autumn proper (‘though it feels like we’ve been in Autumn anyway since mid-July), it’s a pleasure to say the 800 yards of ‘mac look superb – even if the plants and wildlife on the 800 yards have taken a right battering this summer.

The hedgerows lining both sides of the road (but especially the NORTH SIDE (I’ll come onto this later) are bursting with big nettles and marsh woundwort (it’s been that wet!) hips, haws, sloes, blackberries, honeysuckle and acorns – so much so in fact that I WAS going to call this penultimate 800 yards blog post, “Hip Hip Haw-ry!”. 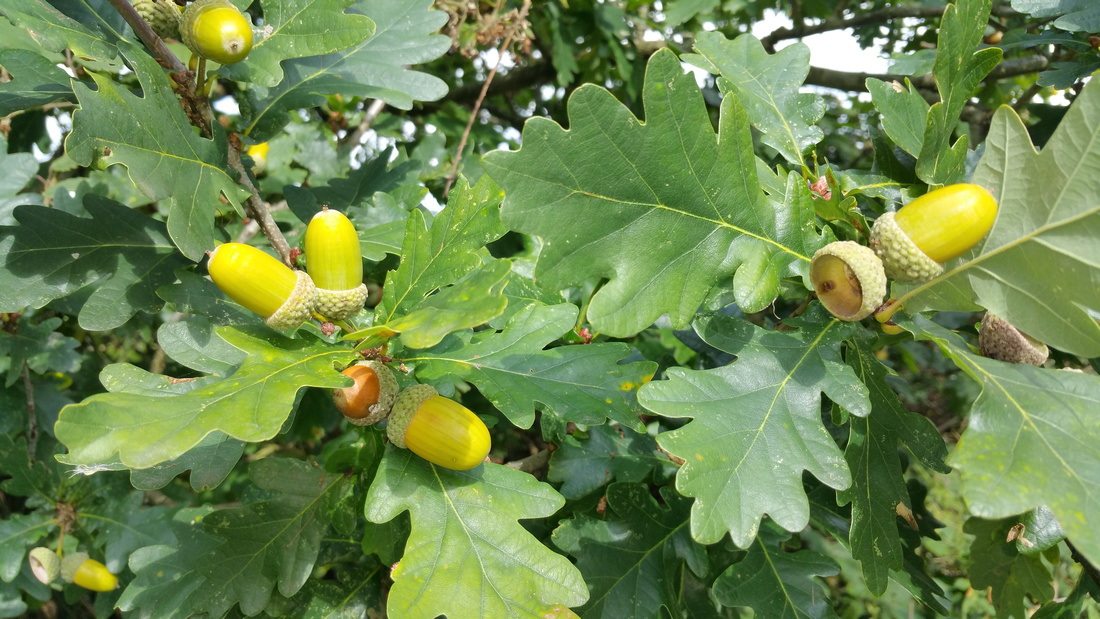 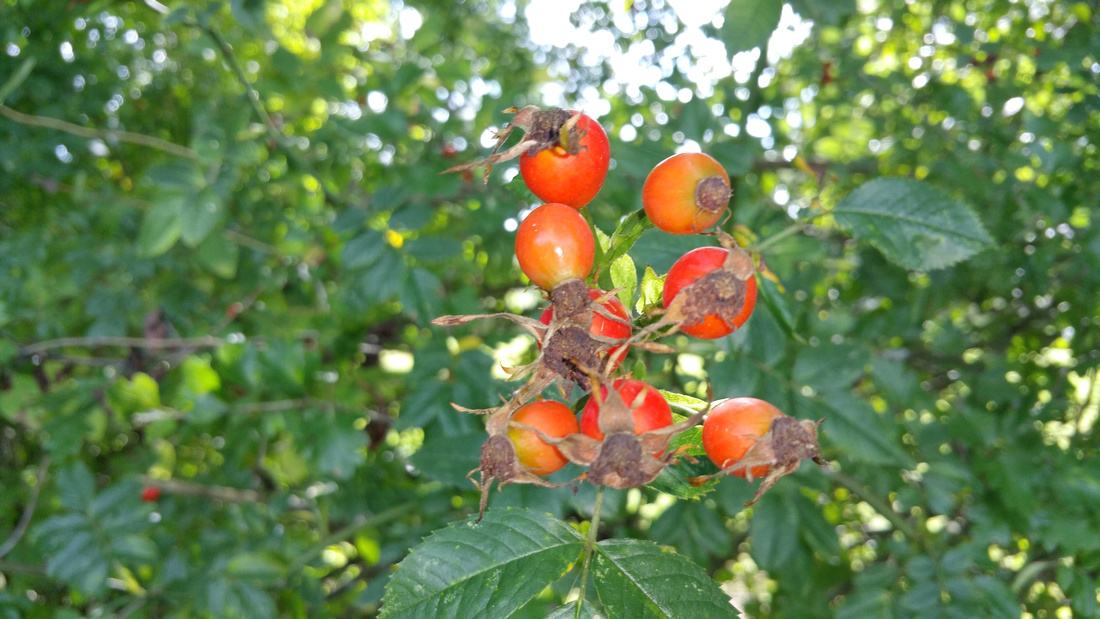 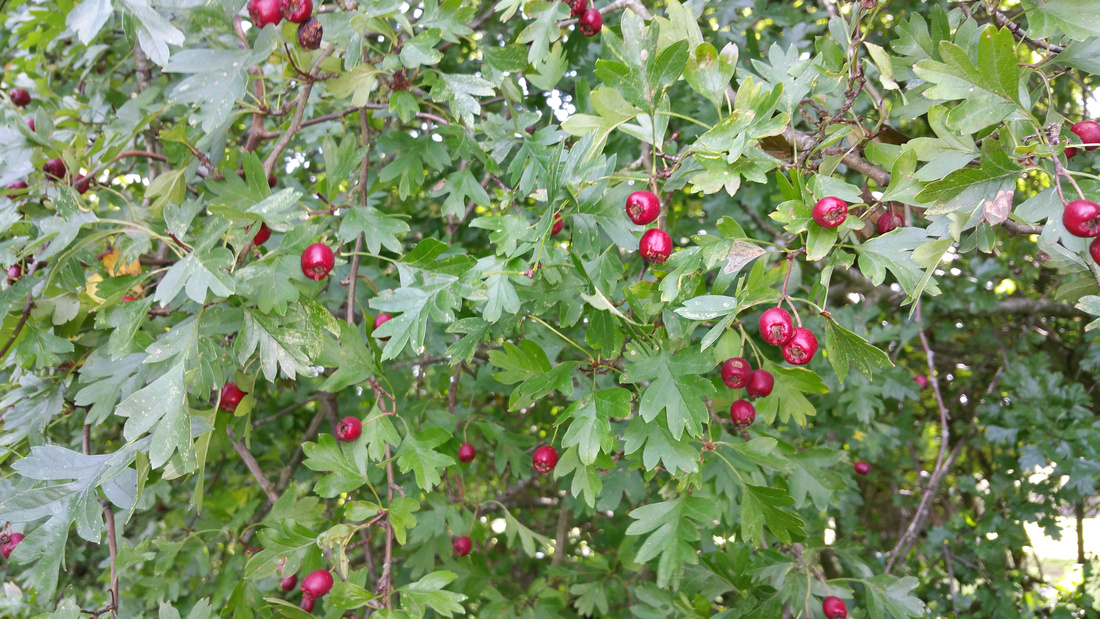 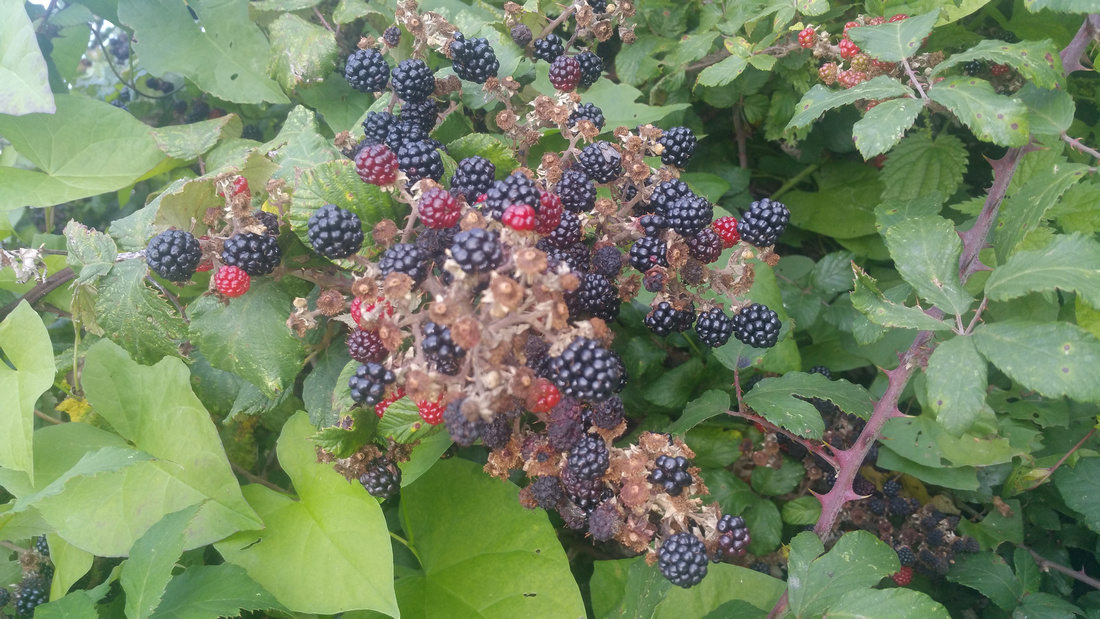 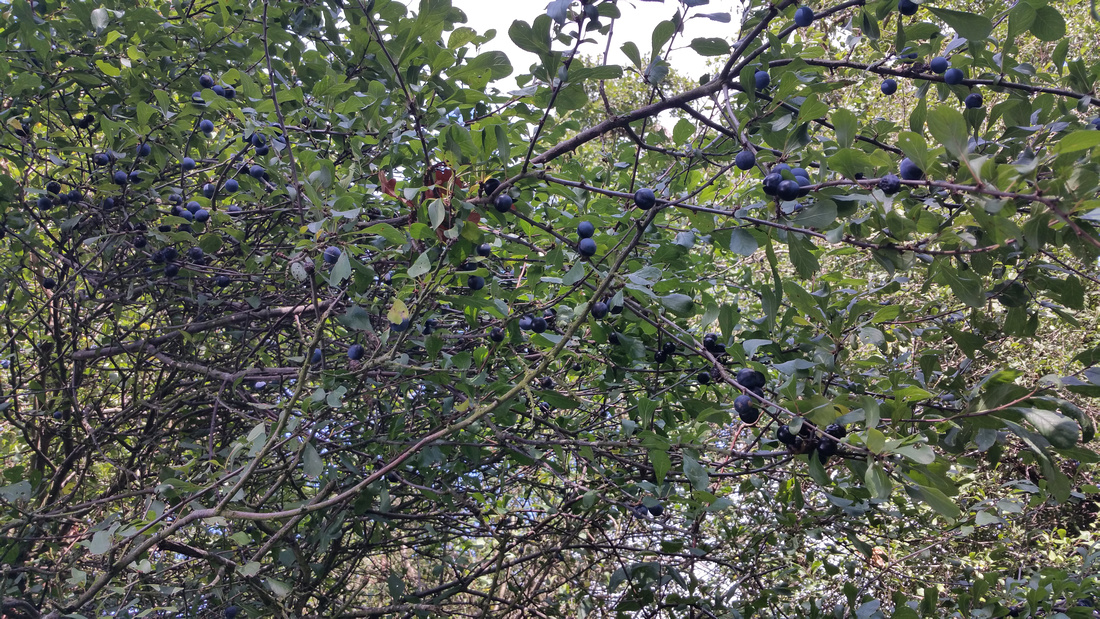 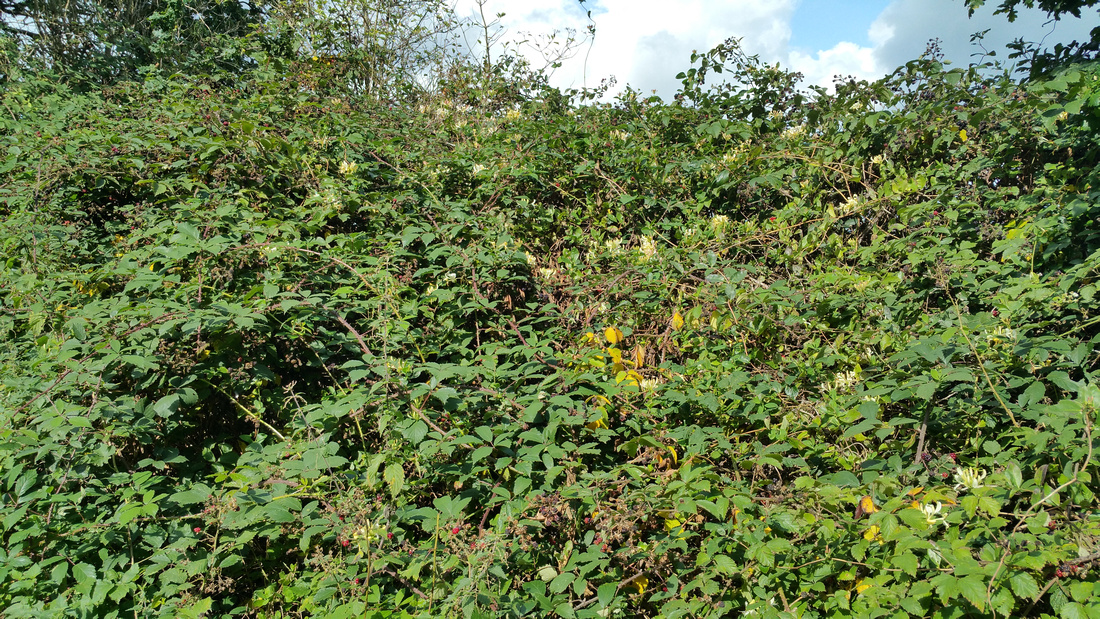 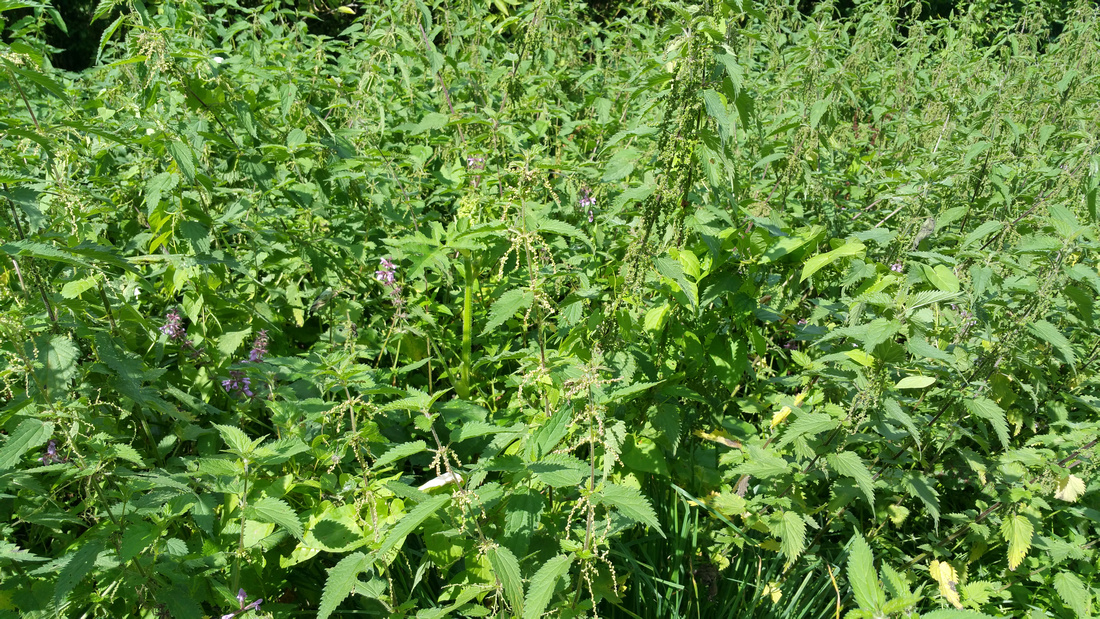 I was driving the boy back from rugby the other morning, with Anna beside me in “The Hearse”, and as we turned into the 800 yards of ‘mac, a TRULY SPECTACULAR SIGHT became apparent through the windscreen (in the bright sun that morning, as it ‘appens).

A group of chattering house martins (mainly, with one or two swallows) was being repeatedly dive-bombed alongside the 800 yards of ‘mac, by a very hungry hobby – again and again, very low in the sky – so low in fact that at one point I thought the hobby would hit our windscreen and if we’d have had a sun roof, and it’d been open – the boy would’ve had a hobby in the car!

I stopped the car to get a photo or video (I only had my phone on me), and the hobby kept dive-bombing above my head – at one point I felt I had to duck!

Unfortunately, by the time I’d found my phone (it’s NEVER on me in the car) and fired it up, the hobby had grown tired of stooping unsuccessfully and flown low due east away from the mixed flock of hirundines.

The photo below shows (if your eyesight is as good as mine!) at least some house martins at the location, if not the hobby! 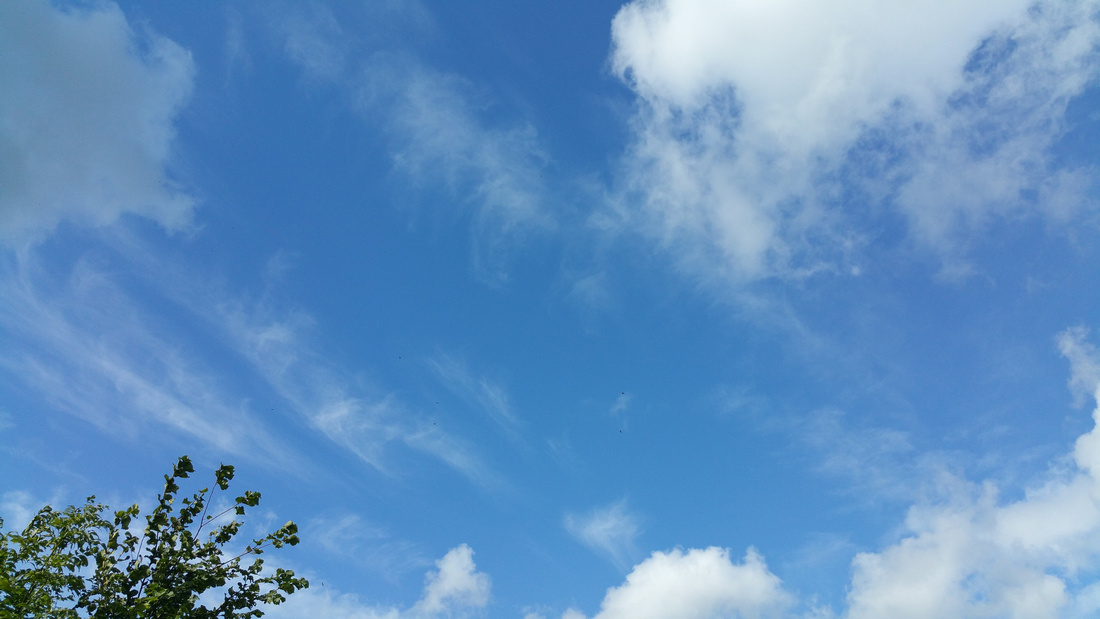 I’ve been back there since that morning, to see if the hobby would return (as I’ve seen a hobby there (which surprised me as its just farmland really and I wouldn’t expect hobby there) before this year, in early summer). But no – no hobby since that morning. Hobbies will all be feeding up now (like house martins and swallows) ready for the migration south – so they’ll be hunting small birds if they think they can catch them. Hobbies are pretty good at this – being one of the only birds that can catch swifts and dragonflies in mid-air.

Well… that’s been the wildlife highlight of the month up at the 800 yards of ‘mac – the good news – but there’s also bad (or at least concerning news).

The land to the north of “my road” (the ‘800 yards of ‘mac) has been designated as a SANG, because of a large amount of housing developments relatively close by. (If you don’t know what a SANG is – please “google it”!)

On my run along the 800 yards of ‘mac t’other day (yesterday in fact), I saw the council notice pinned to a gate (behind which the tree bumblebees were STILL nesting I saw!).

Now that’s not that bad news. At present the four large fields to the north of the 800 yards are farmer’s fields but are pretty-well unused apart from growing grass for sileage sometimes. Skylarks nest in the grass (a few pairs anyway), barn owls and little owls are present. Foxes, stoats, weasels, crows, bullfinches, song thrushes, jays, jackdaws, whooper swans (yes… whooper swans!), Egyptian geese, Canada geese, mallard, pheasant, roe deer, kestrels (of course) and red-legged partridge are ALL present, along with rose-ringed parakeets, tawny owls, swifts, swallows, house martins, pipistrelle bats, drinker moths, tree bumblebees, a honey bee colony and all kind of other things (specifically, many wonderful veteran oak trees) – most of which I’ve photographed and blogged about HERE (just read any of my "800 yards of 'mac" posts).

They’ll “Telly-tubby” the site for sure, so the dog walkers are presented a “natural site” which is palatable to them (meaning “unnatural” really), but at least the site should be safe from development and the wildlife there may (after the initial disturbance in any implementation phase) even benefit from the change in land purpose?

The BAD news is that as is mandatory for these proposals (any development or change of use proposals), an ecological assessment needs to be undertaken -  to see if there is any protected or important wildlife on the site that MAY be disturbed without mitigation.

The trouble is, as I saw after investigating the WHOLE proposal on the council website when I got home, the ecological assessment was carried out in a short time (they always are of course) and carried out about thirty months ago! A LOT has happened up there, wildlife-wise, in that time – and I should know!

The worst part of the proposed development is a piece of (necessary) hard landscaping is provisionally destined to be placed RIGHT BY the pair (this year, remember?) of barn owl’s favourite roost/nest tree. Unfortunately, the two people carrying out the ecological assessment almost three years ago now, considered this tree to be “medium probability of bat roost” when they saw it – but if they’d actually looked inside (with an endoscope) they’d HAVE SEEN a barn owl inside – and as long as that was the case, they’d be NO bats there.

The ecological assessors did find barn owl pellets under one veteran tree (one of their preferred trees but not the one that concerns me) – but I don’t think they saw a barn owl.

Regular readers of this blog will know that I’ve seen three barn owls at one time at this site and two together in one tree (the tree that concerns me most).

Now. The council biodiversity officer at the time (he’s not in post now) of this ecological assessment was informed of the (SCHEDULE 1) Barn owls and has suggested in the planning proposal that a barn owl nest box would be put up on one of the mature (but not veteran or ancient) trees – which would ALL be kept anyway. 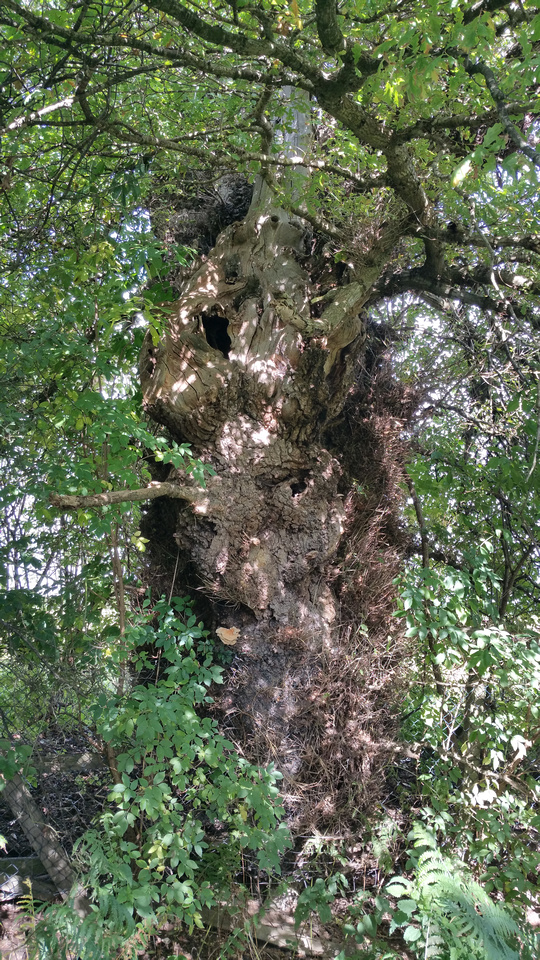 That’s all fine and dandy. But if I was a barn owl (or one of a pair of barn owls) which prefer to roost in veteran (ancient) oaks at the site and suddenly discovered that my favourite tree was being disturbed by diggers and dumpers and workmen for a month or six, I’d bugger off. And not to the nest box in a mature tree 100 yards away – I’d bugger off out of the site (SANG). (I have a feeling I know exactly where I’d go actually – as I know of TWO more barn owl roosts within half a mile or so (each in different directions) of this SANG.

So… reluctantly, I’ve had to raise an objection to this SANG in its current proposal (which I’ve looked at in detail).

I think the final, operational proposal may be OK (even if it does mean that there will be no more skylarks nesting on the site as no bleeding dog owner in the country understands “Please keep your dog on a lead – ground nesting birds!” sign it seems. (The subject for another blog perhaps).

It will mean the site won’t be developed on. It might also mean a more varied habitat (including ponds etc) meaning perhaps MORE biodiversity (but only like I say, if dog walkers are FORCED to keep their pathetic stinking little friends on leads).

But at present, I am very concerned about the effect the implementation of the development of the SANG will have on the local barn owls in particular – they’re so picky, barn owls.

I feel SO unbelievably fortunate to have not just one, but perhaps up to five barn owls which I can see within a couple of miles of my house – and I’d hate it if this SANG development disturbed them enough to leave (perhaps permanently).

I also enjoy the current peace and quiet up at the 800 yards of ‘mac – and this would almost certainly go too – but that’s OK I guess – wildlife and areas like this should be for everyone – not just me!

Anyway… I’ve lodged my sole objection as you can see below (I’ve blurred a few lines (the council may want  to broadcast my address - * sheeesh,thanks a lot!* - but I don't!) and changed the location to land north of “800 yards of ‘mac” (rather than the actual road name).

I hope someone from the council (perhaps the new biodiversity officer) gets in contact with me, so we can meet up at the 800 yards, I can show her the EXACT trees that are SO important to the owls (and therefore just WHY one specific aspect of the current proposal concerns me so much).

More next month perhaps grapple fans, in the final instalment of the twelve “800 yard of ‘mac” blog posts. 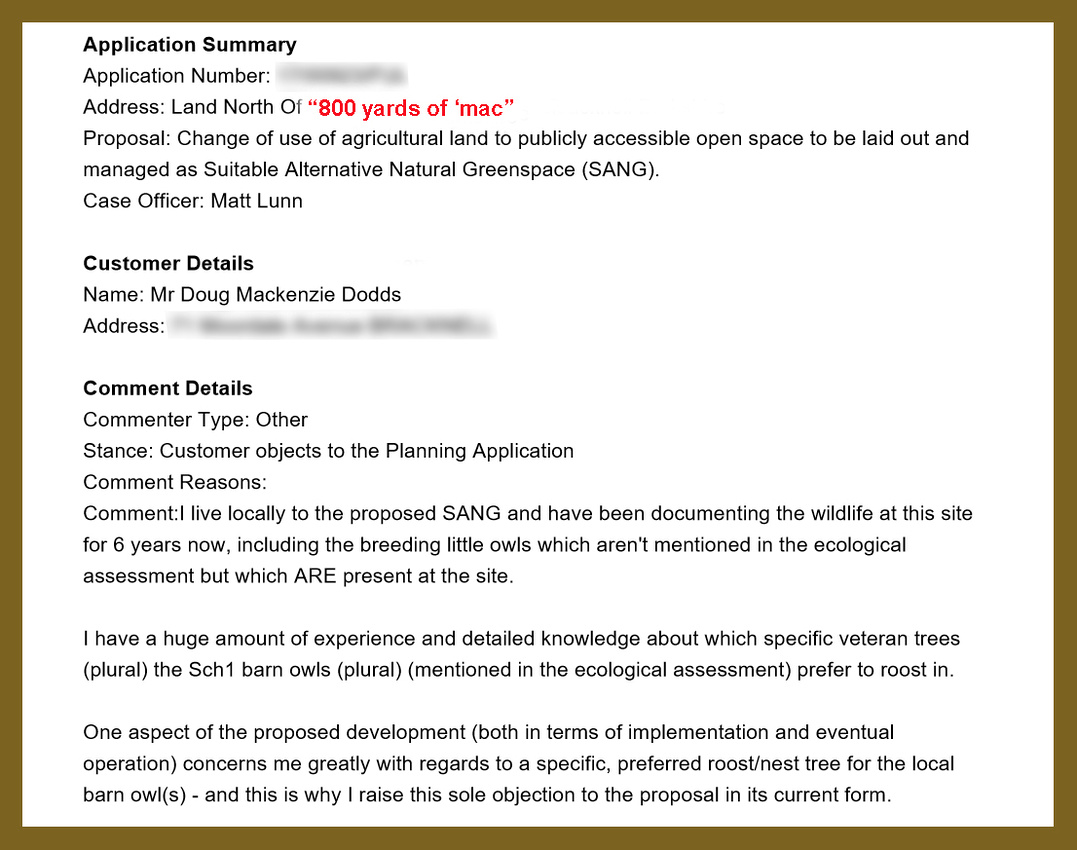 Doug Mackenzie Dodds - Images
EDIT - ON the 16th September I was driving down the 800 yards of 'mac (coming back from golf) and SAW the barn owl standing in the tree (that I'm most concerned about) on the road.
I DO hope the council contact me with regards to this SANG - I'd HATE it if we lost our barn owls - even temporarily!
No comments posted.
Loading...
Subscribe
RSS
Recent Posts
Hornet moth natural histories A wonderful wildlife and weather weekend. Today's partial solar eclipse. PHOTO. Another. A,B,C and D Crewe Station. Three little birds. Revealed. Three little birds. Thirty-five years. A teaser for you - the answer. They're back!
Keywords
little owl Operation noctua swift hedgehog fox barn owl buzzard HD video kestrel swallow
Archive
January February March April May June July August September October November December
© Doug Mackenzie Dodds - Images
Powered by ZENFOLIO User Agreement
Cancel
Continue