Before I start this month's update, I bet.... I bet you that after you read the post below and play the last short video (the song)... I bet you go around singing it for days.

It’s becoming increasingly clear to me as we progress through the twelve “800 yards of ‘mac” blog posts that I’m struggling to find time to really explore (in the detail that I’d like) everything that’s happening on this stretch of tarmac at a local country farm – I’m just too busy!

That said, I do visit most days, if for no other reason than to begin my stumblings through the farm on my “runs”. Runs in quotation marks as most people that saw me wouldn’t call what I do through the farm “running”. More like slow wobbling, sweating, swearing and bleeding.

Anyway… what has happened on the 800 yards of ‘mac in the last four (or so) weeks?

Firstly, the driest April since the Cretaceous period (probably) broke as May arrived and we’ve been having a little of the wet stuff recently (with quite a bit forecast this week I hear). Together with a change in wind direction, if not strength (from an easterly to a south-westerly), this has resulted in a sudden rush of green around the 800 yards.

April’s bluebells are now pretty-well over and dwarfed anyway by the rampant nettles and brambles that have exploded into life over the last fortnight or so.

Gone also is the blackthorn blossom, replaced by the similar, if less spectacular (as it comes AFTER the leaves, not before like blackthorn) hawthorn blossom. 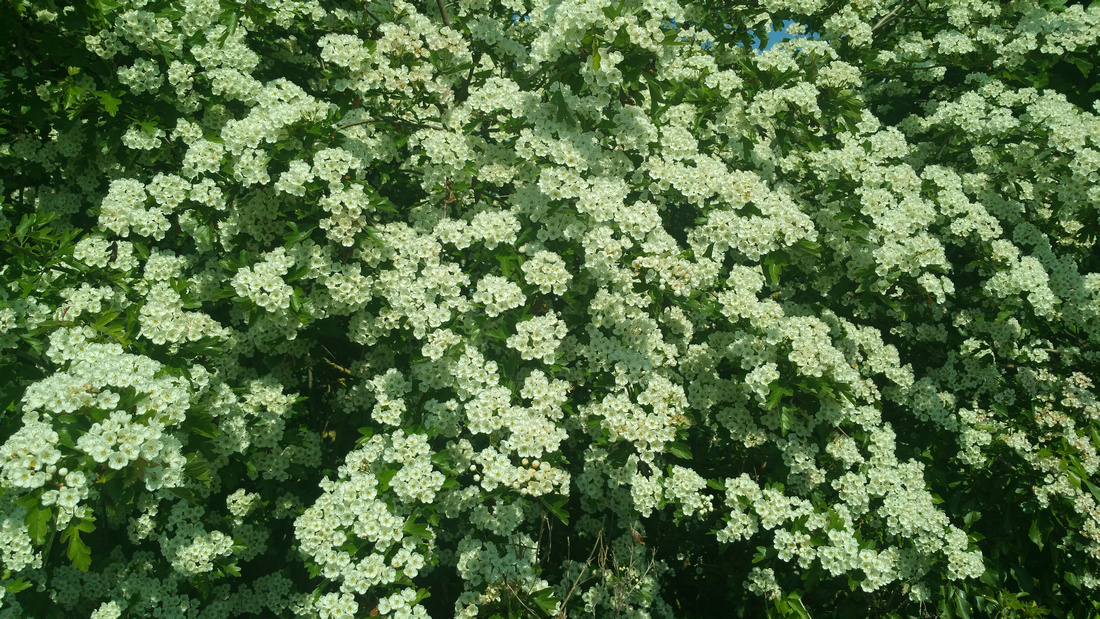 With the hawthorn have come the swallows, martins and my favourites… the swifts. Swallows are an integral part of the 800 yards of ‘mac from May to September as they nest in open horse stables which are EVERYWHERE in this area (East Berkshire and especially where we are – north of Bracknell, near Winkfield, Ascot, Warfield and Windsor… so think Polo (the sport) in particular).

Also nesting in a stable, albeit an alpaca “stable” (shelter really) just off the 800 yards, is a family of pied wagtails. On my walks up and down the 800 yards of ‘mac in May so far, I’m ALWAYS accompanied by a very upbeat-looking (I know I know, wagtails can’t be “upbeat” … that’s a human emotion) male wagtail, dancing up and down on the tarmac in front of me, picking off weak insects before bouncing away to the nest with them.

I do love wagtails. As I’ve mentioned above, I’m well aware wagtails aren’t “happy” … but they always make me happy for some reason – it’s just that they appear to be happy little birds.

I haven’t seen the barn owl(s) at its(their) hollow tree for a few weeks now. That’s not to say it’s(they’re) not there… just that I’ve not seen them (see the first paragraph of this piece). At this time of year, I do often (unless they’re obviously breeding) tend to lose track of “my” local barn owls as they only appear well after I’ve gone to bed and head off back to bed themselves well before I get up, generally.  Do I think they’re breeding in one of their hollow trees alongside the 800 yards of ‘mac? In a word – No. In a few more words – perhaps, ‘though I’m not convinced at all.

There are other birds breeding in the bushes and trees lining the road though. I know song thrushes are (it’s such a joy to see song thrushes these days… I never thought I’d say that as they were SO common when I was a boy). I know a pair of bullfinches are too, as are a few pairs of goldcrests. I’ve not looked for or found any of those birds’ nests though (no time) and nor have I tried to find the skylarks’ nests in the pasture meadows to the north of the 800 yards of ‘mac (ditto) but by these birds’ behaviour – it’s clear that they’re nesting.

I have located a nuthatches nest though and a blue tit’s nest – both in the same large ash tree near the end of the 800 yards. Regular visitors to this site may know I am seeing and hearing nuthatches EVERYWHERE these days, so it’s no surprise (to me anyway) that I’ve found my first nuthatch nest on the 800 yards of ‘mac this year.

I’m not sure where the chocolate buzzard is nesting (or even if it is nesting) but I’d think it wouldn’t be too far away.

Rabbits are more and more noticeable along the full 800 yards at present; rabbits of all sizes and right at the start of May I happened across a hare at the edge of a crop field alongside the road.

The only other thing worth mentioning this month (I think) are insects, specifically bees and even more specifically, honeybees and tree bumblebees – both of which have colonised different things along the 800 yards.

First, the honeybees. I must’ve mentioned before (in at least one previous post?), the fact that there’s been a colony of bumblebees using the same knot hole in the same tree trunk for 5 years on the road. This year these honeybees seem to be entering the tree from the base! I’ve never seen anything like this before with bees, especially because this is a large, solid, healthy tree – with no apparent access into the trunk let alone room for a large colony of honeybees! A terrible (but thankfully short) video of these bees gathering above the brambles at the bottom of this large tree can be seen below.

Tree bumblebees are the only species of bumblebee to nest above ground (often in roof spaces or empty bird boxes etc). These tree bumblebees have chosen to occupy a threshing machine parked by a gate leading off the 800 yards of ‘mac to a private pasture and are therefore nesting just a foot or two off the ground.

How do I know the bit of farm plant that they’re nesting in (see short video above) is a threshing machine?

To be honest, I don’t know that. I’m no farmer after all. But I like to think it’s an old, rusty, defunct threshing machine, if for no other reason to leave you with the video below.

Onto flaming June grapple fans… and let’s hope it really is flaming, eh?