What I did on my summer holidays.

What I did on my summer holidays.

Most people really wouldn’t appreciate spending their hard-earned summer break (even if only a few days), surrounded by toads, hornets, bats and moths.

But I’ve never been “most people” and nor, thankfully, is my wife.

Anna and I (and Ben our 32 month old boy) were going to head down to Cyprus for a fortnight in August, (to be surrounded by mosquitos, tarantulas (yes, tarantulas in Cyprus) and geckos) but after realising that we couldn’t get any cat or hen-sitters in the house for the whole two weeks, we decided to go on a “stay-cation” instead – one that we have considerable experience of – and enjoy – camping in the New Forest.

To be honest a sweltering Cyprus (Nicosia reached 53c in the shade the week before we took our holiday) with a toddler wouldn’t have been much fun anyway – Anna and I love our heat and sun – but Ben is waaay too young for that sort of stuff – so we would have been stuck inside an air-conditioned villa, WATCHING the sun worshippers for two weeks – not much point in that!

Yes. Off to the New Forest we went instead – for a very British camping holiday in very British summer weather. All clothes for all seasons needed to be packed for 5 days in August!

I’ve always felt very, very comfortable in woodland. It might be a cliché to say I’ve always “felt at home” under a canopy (of cellulose), but it might not be too wide of the mark in my case – and the New Forest is just spectacular, at least whilst the trees are in leaf. 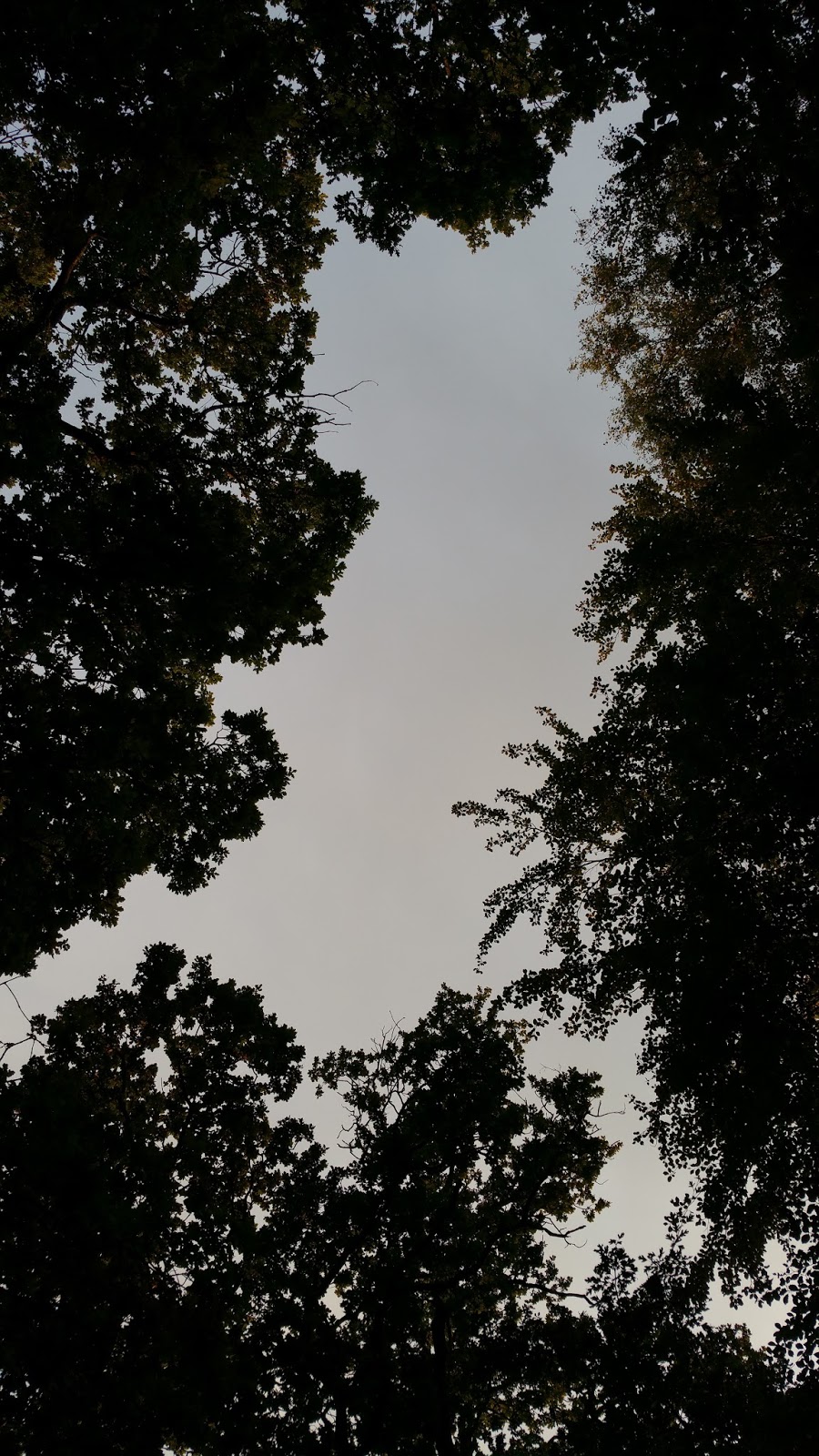 And I’m bemused by some of the traditional camping clobber and camping routines of my fellow campers on site – from sandals and socks to sitting outside a caravan all day every day, tea in hand, watching anything but the wildlife.

Then there’s all the STUFF people take camping. Gargantuan tents. Furniture. Barbecues. Tables. Benches. Everything from the kitchen (including the sink if they only knew how to un-plumb it I’m sure). WHY?!

You might as well camp in your front garden in that case, as far as I’m concerned.

I go camping to ESCAPE from people. Not to join them in a “number two queue”!

My favourite camping trip with Anna was the first time we went – maybe 8 years ago now I suppose. We packed a little tent, a spongebag and towel each, a few changes of underwear and a bottle opener and that was about it.

I remember clearly sitting outside our tent on a stump, watching a couple of burgers sizzle away on a disposable barbecue and thinking we haven’t got anything to flip the burgers with – so we used a couple of spare tent pegs.

Now THAT’S my type of camping!

I actually love (unorganised) camping and when single, used to take my tent on my own, on my mountain bike, find a suitable spot in a large wood and bed down for the night. I deliberately chose spots that were WELL off any beaten track and deliberately chose times that were warm and dry. And felt, like I’ve said…. VERY at home, surrounded by deer and badgers, roding woodcock and kewww-icking owls.

But now I’m not single and can’t really hide myself AND my wife AND my son in a local wood for a couple of days and nights – so off to Ashurst Campsite (near Lyndhurst at the top of the Forest) we went.

We’ve been before. Quite a few times. On our own and with family and with friends. We’ve even taken Ben before, last year, not even aged two.

What is it about the New Forest that I like? The scenery for sure (its soooo pretty) but also the weird and wonderful wildlife you might see there – from the fungi (not so much in August admittedly) to honey buzzards, goshawks perhaps, hornets, beautiful dragonflies and moths, snakes and lizards.

I like the fact the Forest is in south England, so the weather is often better than… oh… the Kielder forest for example and the lowland heath is there in abundance too – I absolutely adore lowland heath.

Anna and I managed to find our best spot yet at the campsite – under tall trees at the edge of the “wood”, overlooking the cow field, with not one tent pitched anywhere near us! 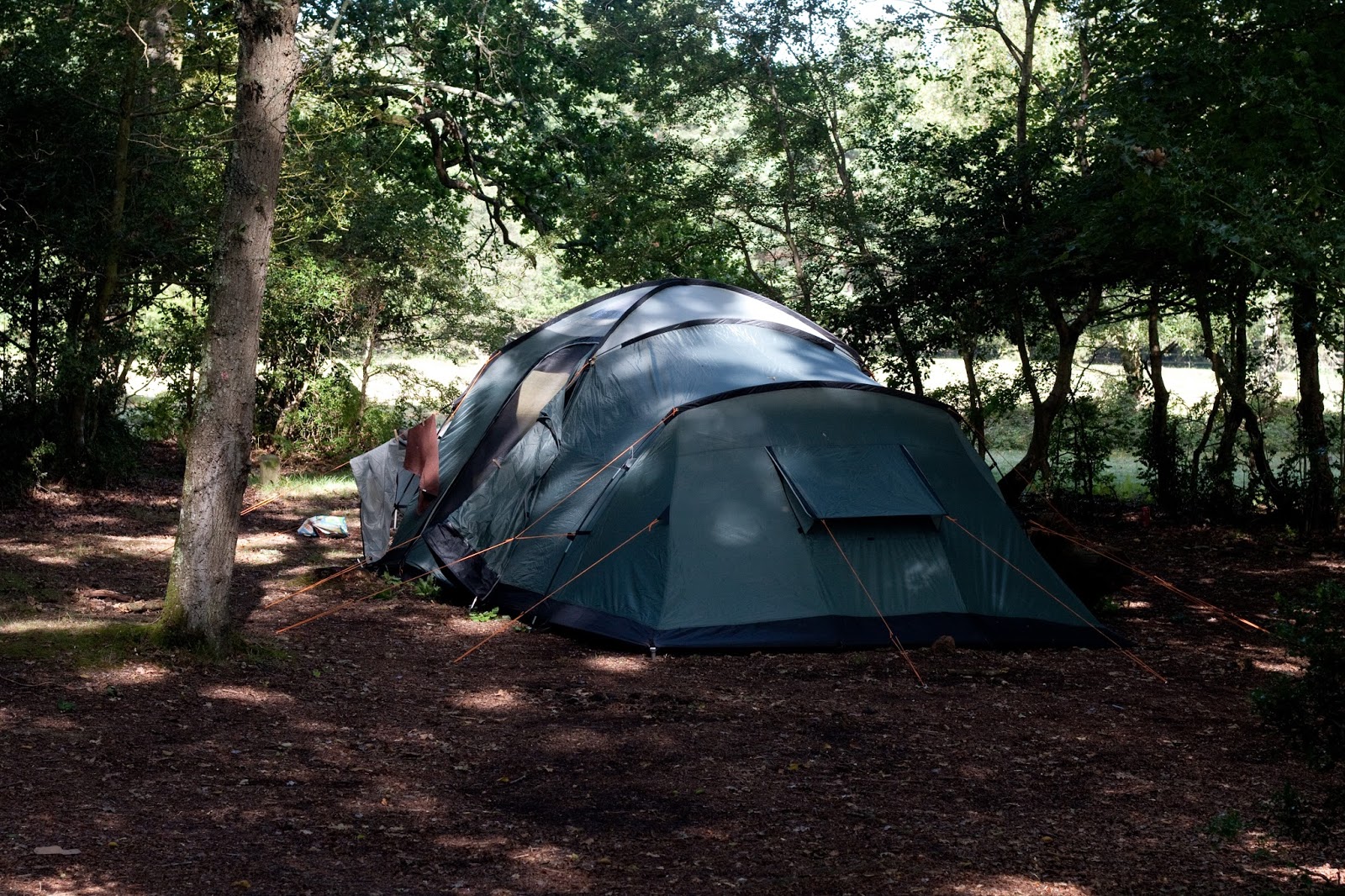 I have no idea why the vast majority of campers at this campsite (and others I’d assume too) prefer to camp in the open (no trees), as close as possible to the toilet and shower block as possible – but it seems they do. I hope they continue to do so too, for whatever warped reason, as it leaves the FAR more sensible option of camping under trees to people like me and my wife and gives us far more privacy too (Wink wink)!

We knew the weather might be a little…. errr…. mixed…. during our 5 days on site, but we wanted to get Ben to see the seaside for his first time ever during our stay – and go and see the Bournemouth Air show too – he seems to like planes and eh-wee-coppers – and finally we wanted a chance to unwind for short time, to visit the big pub next to the campsite, to not have to feed the cats or clean out the hens or even  NOT cook for ourselves (and wash up!) for a day or two.

Now whilst I might not fully appreciate “organised camping” (actually.... "organised anything" often raises my hackles), my lovely wife has no such hang-ups and actively enjoys camping – organised or otherwise.

I’m very lucky in that respect (and many many others).

Actually, on that subject, I saaay I’m lucky in that respect, but I don’t think I’d be with Anna (or any woman for that matter) who didn’t enjoy being outside and a little bit dirty. Luck probably doesn’t have much to do with it.

In my groom’s speech (seven years ago now) I remarked that I’d taken Anna to “Live Eight” on our second date (our first date was just lunch at “The Clachan” in London) and it was a bit of a test really – I wanted to see what this beautiful woman would make of spending 10 hours in a field (my “manor”!)  with me  and  indeed what I’d make of her in that environment. Would she be too cold? Would she be too hot? Would she be bored? Would she worry about how she looked?

I think the fact that we left the gig a bit early (but not because we were too cold!) that evening and are now married with child should let you know all that you need to know about how brilliant I found Anna to be on that day, outside in a field for so long (and dare I say, how utterly charming (cough!) she found me to be!

Anna loves being outside too – even if she has to queue to have a shower in the morning – and camping with her is a delight (even if she probably wouldn’t say the same about me!).

It didn’t matter to her that we’d inadvertently pitched our tent RIGHT NEXT TO an active hornet’s nest. Nor the fact that our lantern on our card table at night attracted the most fluttery of moths. Nor even the fact that we realised we had spent the week with a toad hiding under our groundsheet as we packed up the tent on a beautifully-sunny Saturday morning.

On the hornets – I’ve always liked these big wasps. So much more mature, sensible and level-headed than their MUCH MORE ANNOYING little waspy cousins. Can’t stand wasps myself (this year doesn’t half seem “waspy” to me), but hornets are great. They don’t bother you – in fact even if you catch one (don’t by the way), they’d probably rather try and bite you rather than sting you. 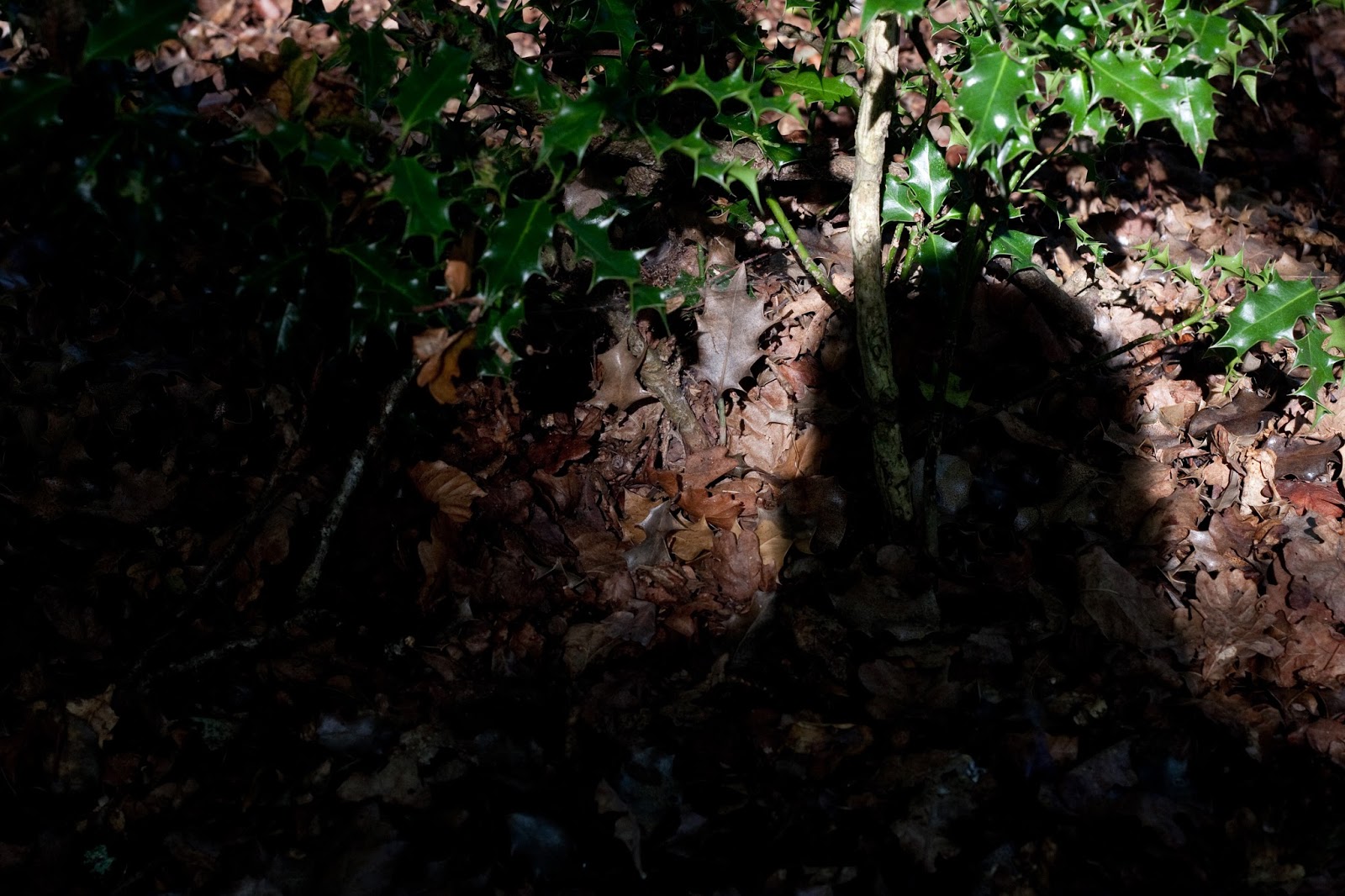 It was a pleasure, a treat even, to sit by the hornets’ nest each morning (from where I took the photo above - can YOU find the nest entrance - have a go if you like - all will be revealed at the bottom of this blog), coffee in hand, watching these big insects just calmly go about their business (as we flapped and slapped at their little wasp cousins constantly hovering around our ears and coffee mugs – silly, bothersome things).

Apologies here, I did get a shot of a hornet entering its nest, but accidentally deleted it – so here’s a photo of that photo (which I used for a “tweet”). 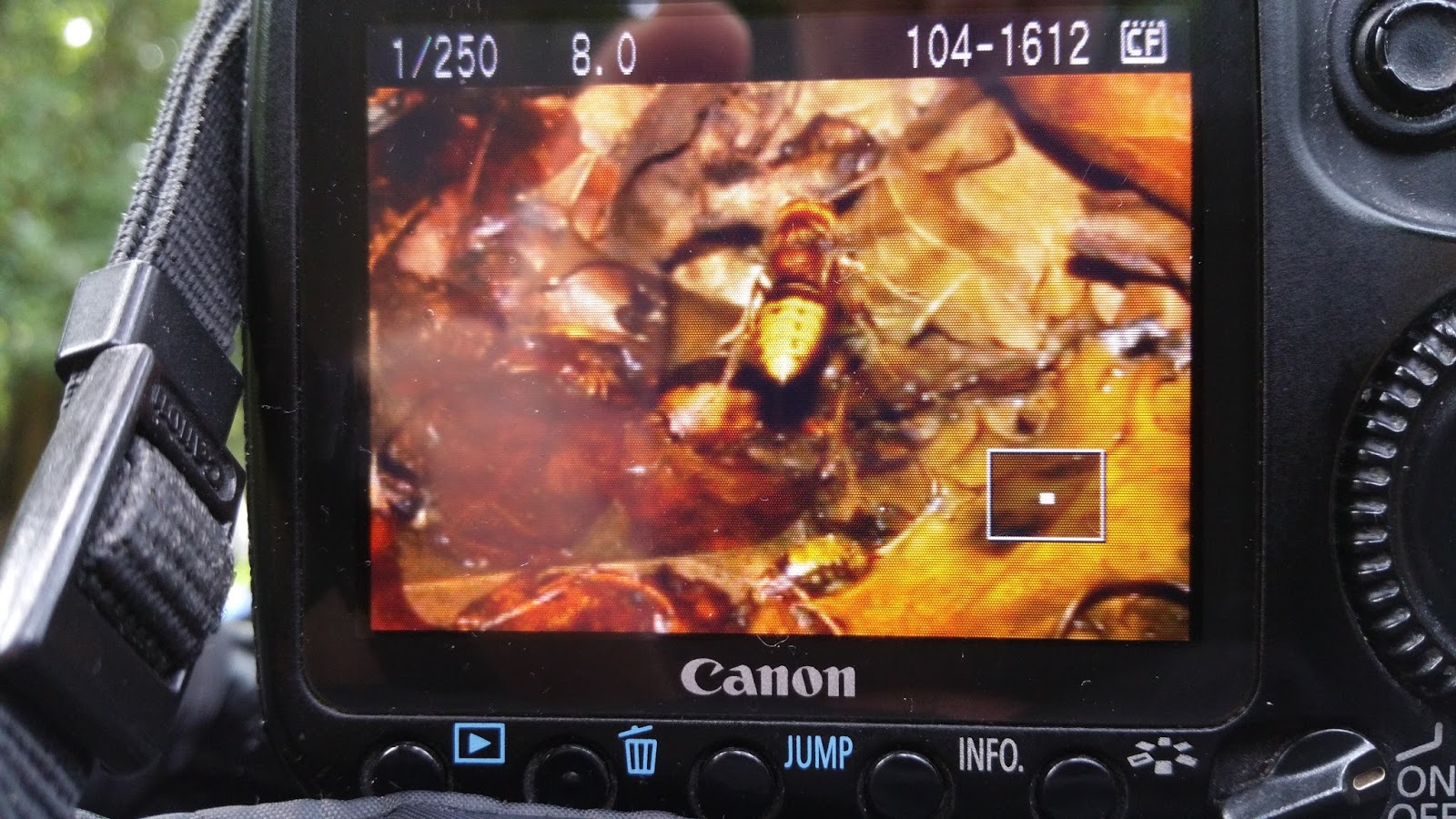 On the moths – we played a game of forfeit pontoon over a bottle of vodka on our first night (less attractive to wasps than beer I’ve found), and our little camping lantern attracted a BELTER of a moth – a quite stunning Black Arches.

I don’t think I’ve ever seen one of these moths before, even at that oak-tree campsite (big on oaks, the black arches moth), so I was very happy at attracting such a stunning visitor during our card game. 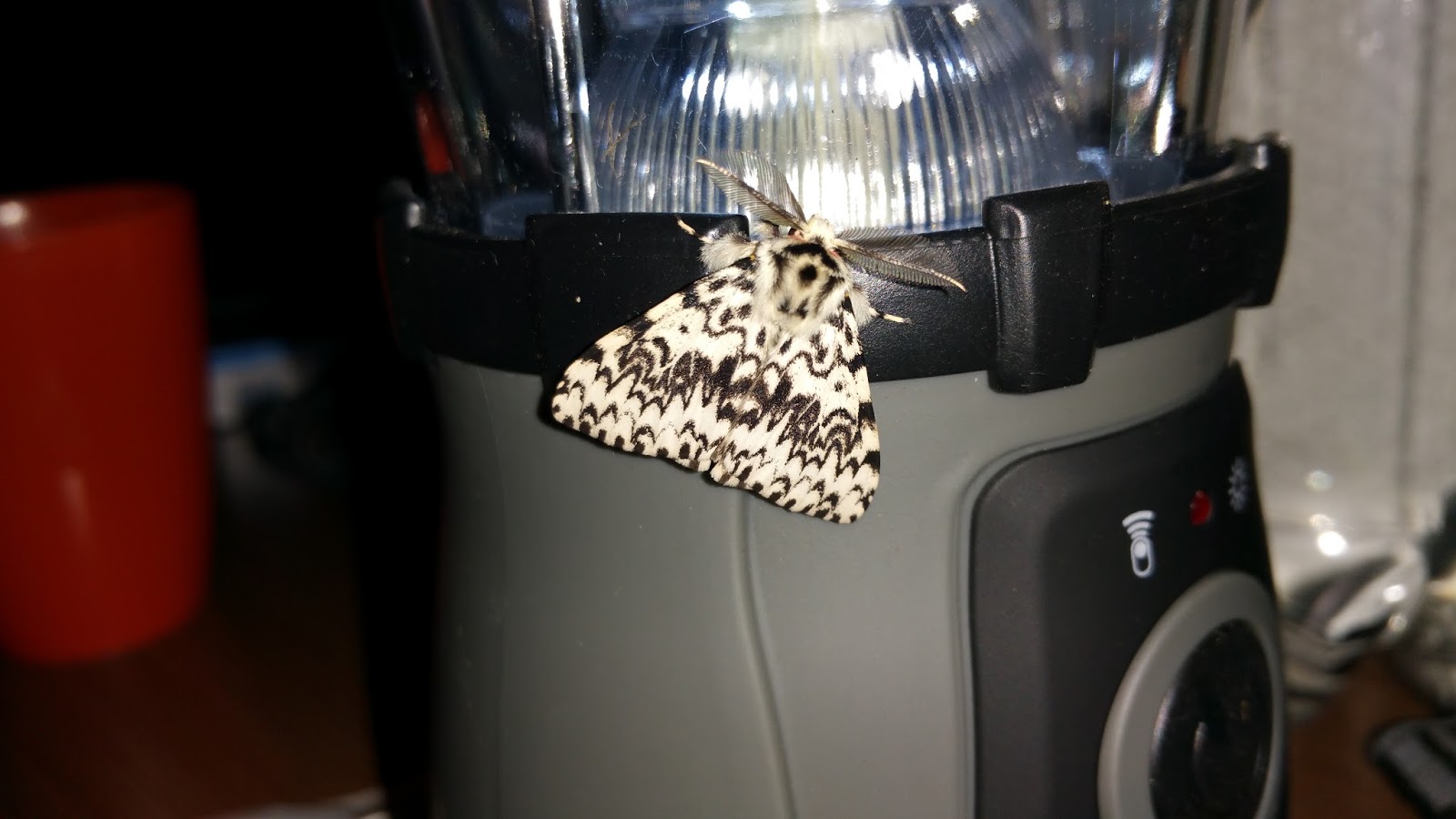 The moth flattered to deceive though, unfortunately. Pretty-well as soon as it appeared, I started losing every hand I was dealt in the cards, meaning all the dodgy forfeits (no… I won’t tell you what they were!) came my way all of a sudden.

Nice to see though – and we saw a few more during the following nights.

I shouldn’t have been that surprised about seeing lovely moths during our camping trip, but we were both surprised at seeing the toad. A big fat female toad she was, hiding under our groundsheet as we packed up. I’ve blogged about toads and their coppery eyes before, so I won’t bleat on here, but save to say that was a lovely leaving present from the forest. At least for me. 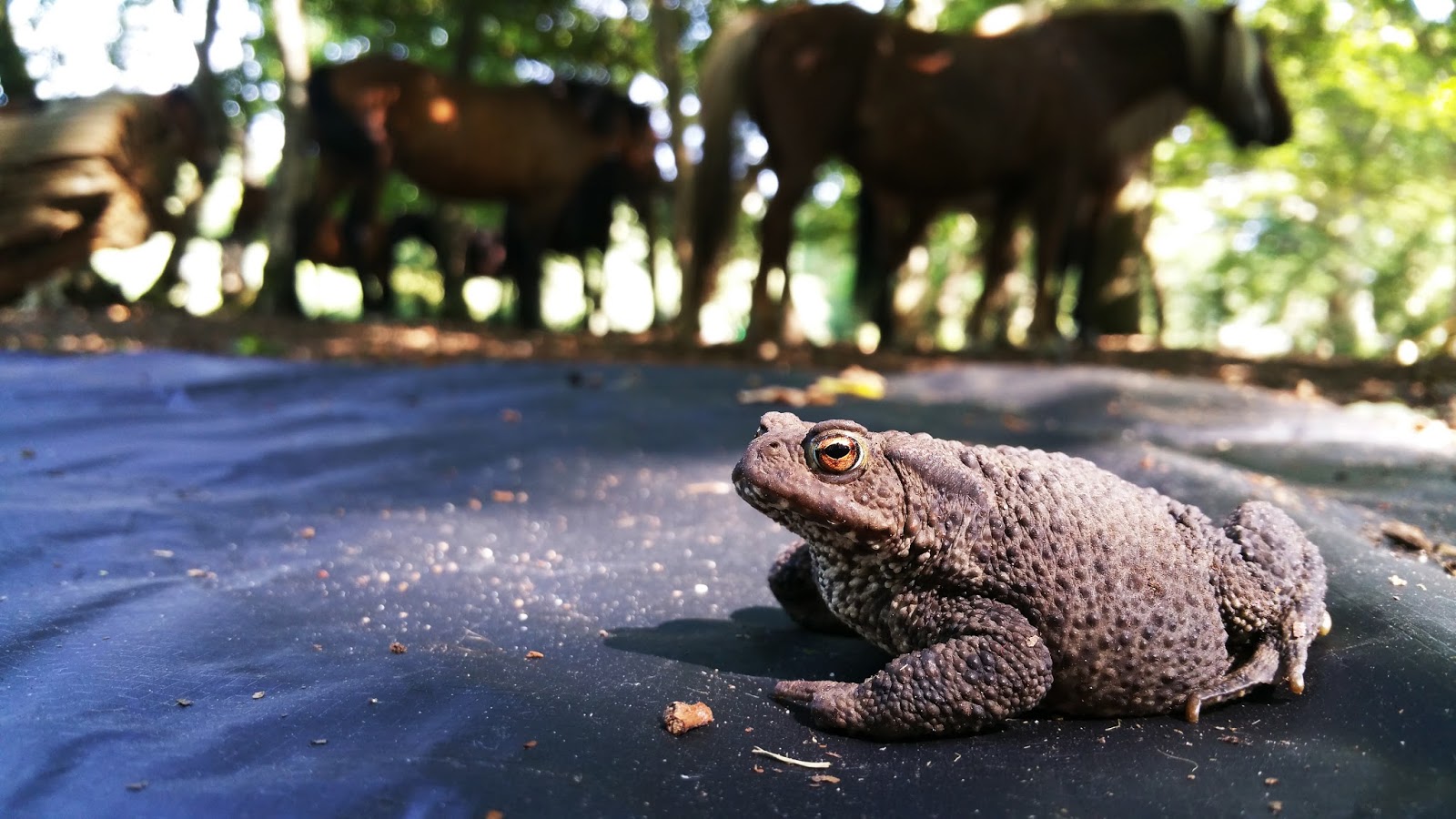 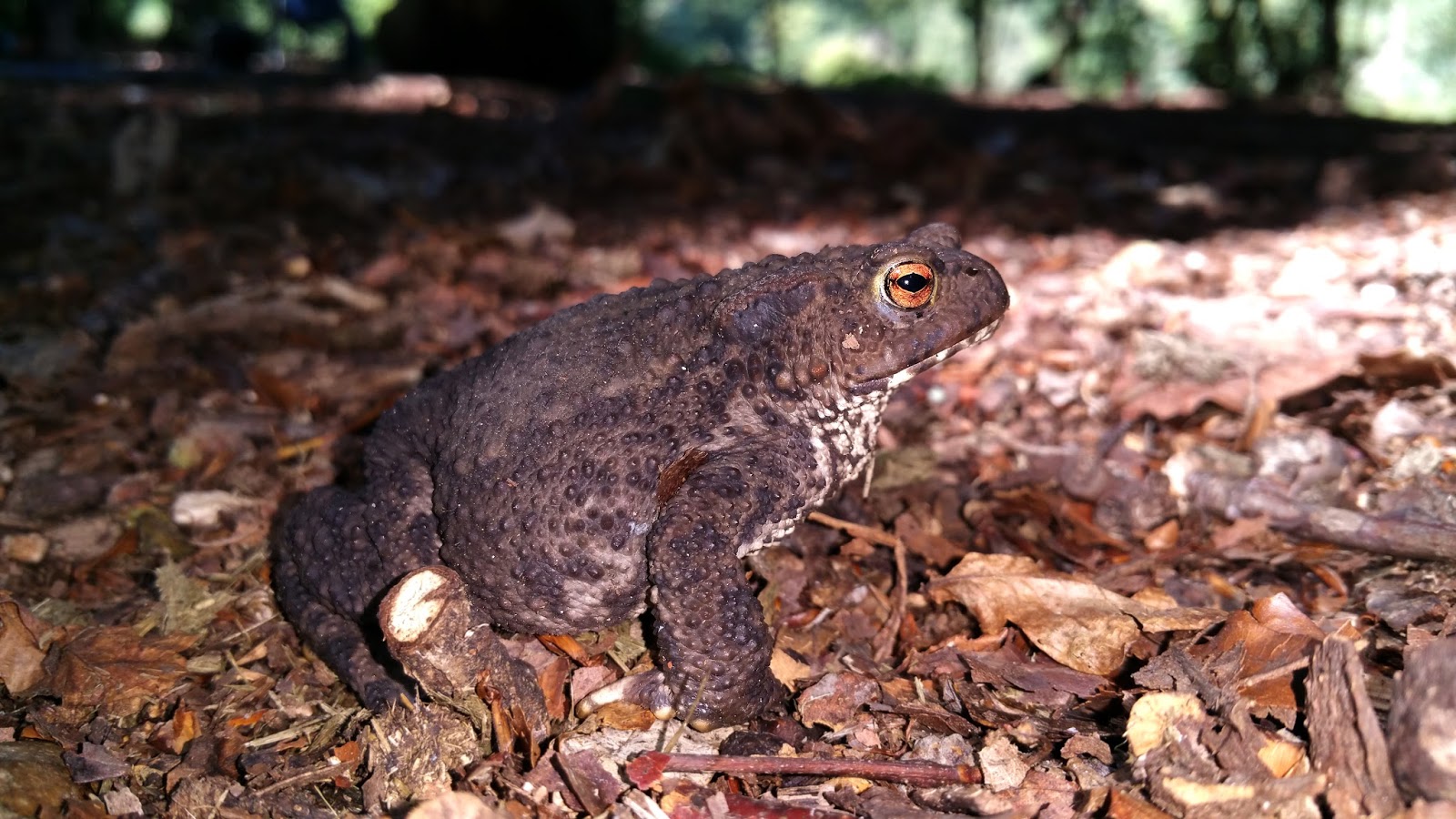 As for the 5 days themselves – well… Ben did get to see the seaside for his first time. 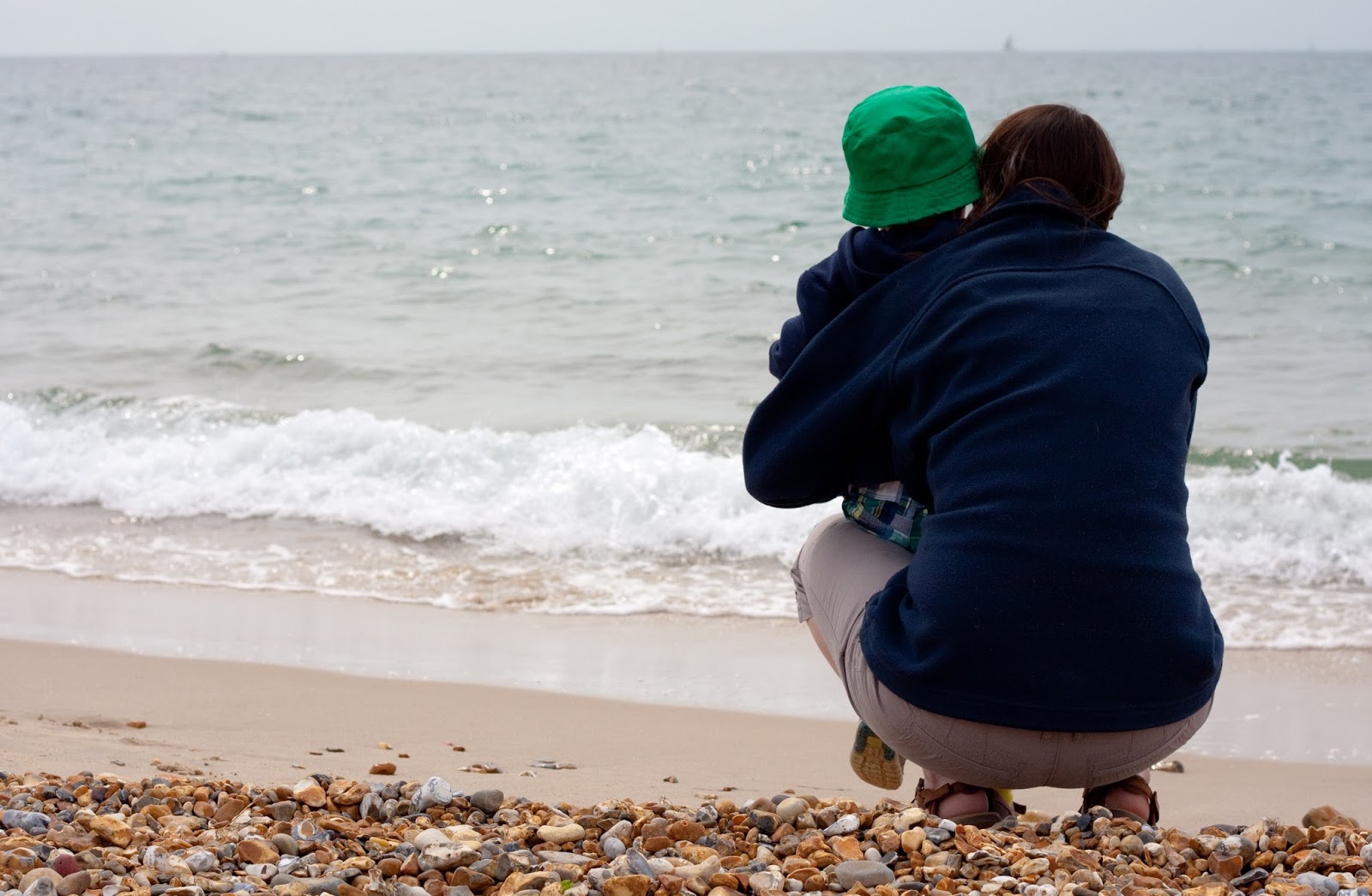 At Hengistbury in case you’re interested (where an old boy caught a beautiful red gurnard in front of us – so I had to get a piccy). 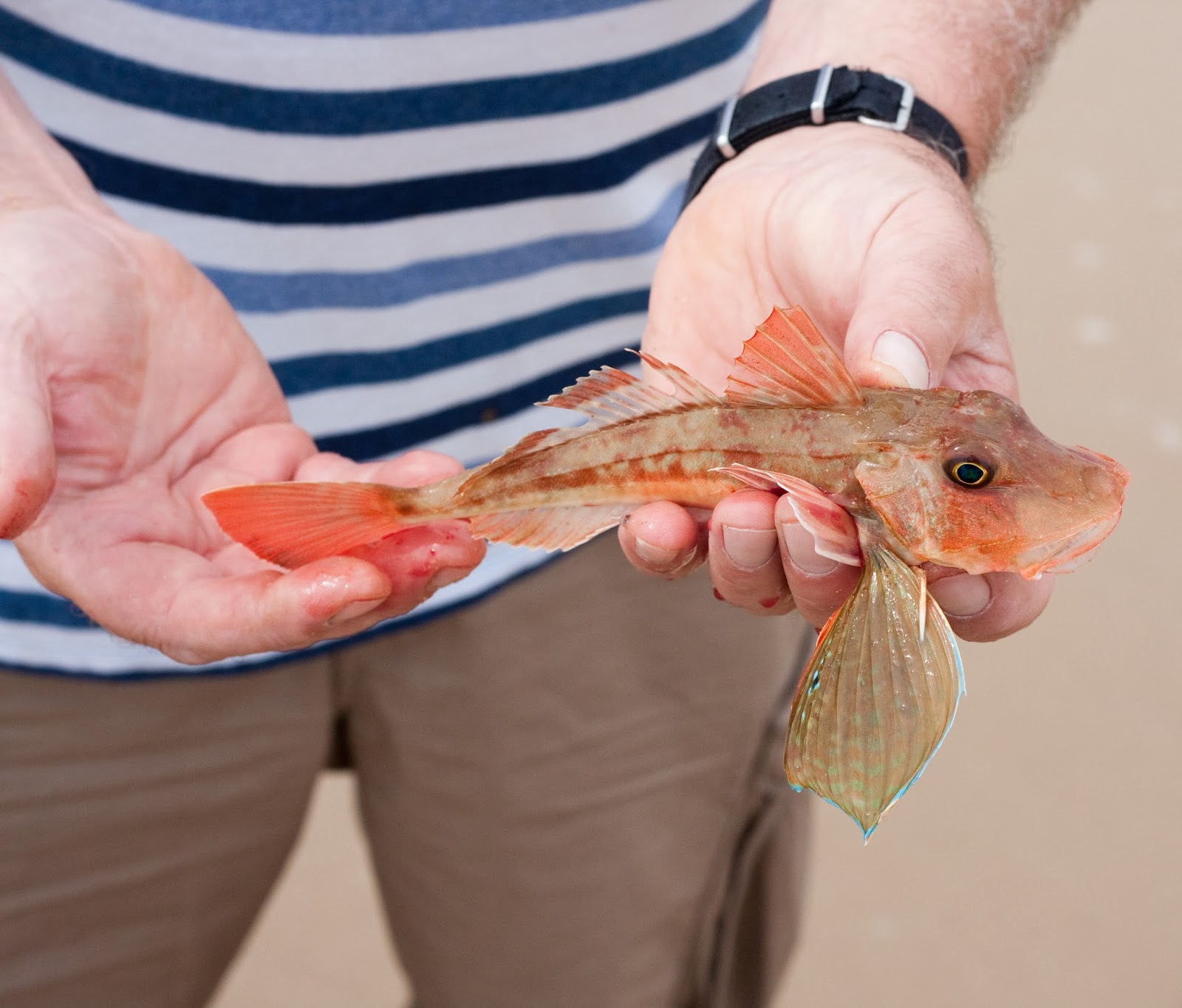 Ben also did get to ride on several “wains”, which he enjoyed in a wide-eyed toddler way.

He also did get to see lots of lovely planes at the Bournemouth Air show.

We went twice to see the show – the first day was rained off (BOO!) so we went again the next day and were treated to the sight and sound of spitfires (love ‘em to bits, the spits), hurricanes, red arrows and even a lovely B17 in beautiful, glorious sunshine all day. 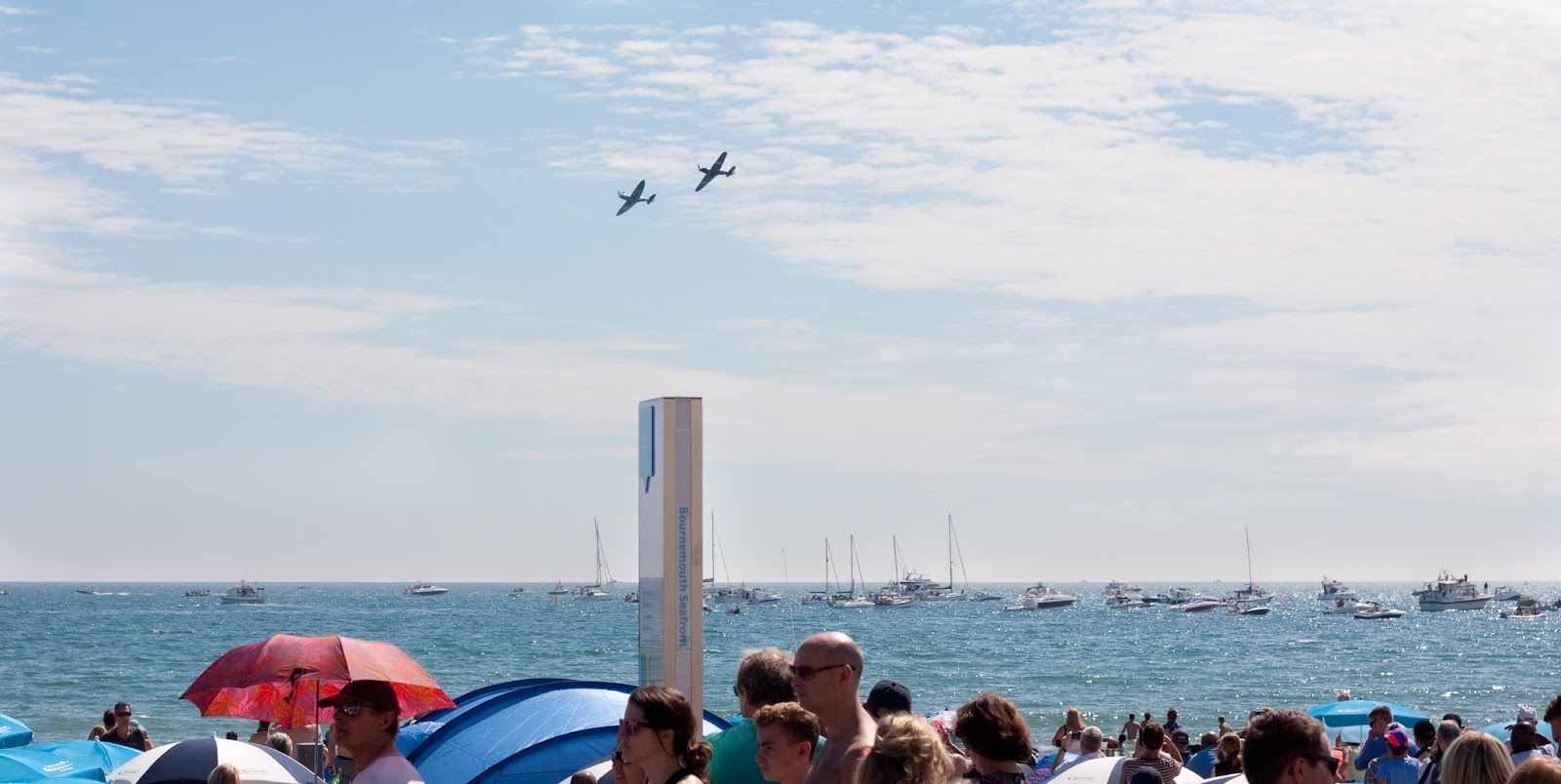 I could waffle on all day about the Air Show at Bournemouth, but this blog is already (once again) far too long.

A day or two of miserable rain and two or three days of glorious sun in my favourite part of England.

That’s what I did on my summer holidays. 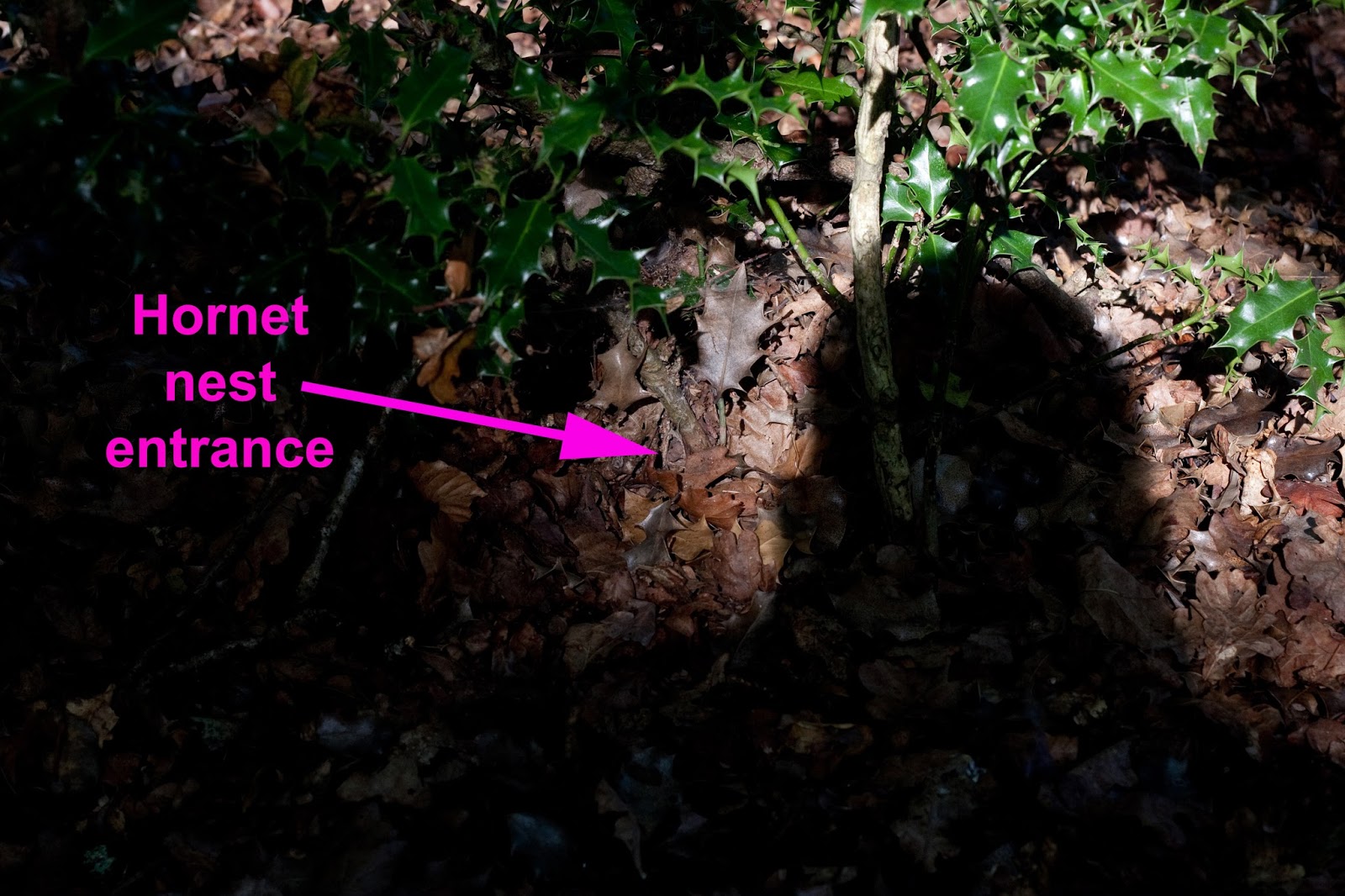