The height of summer.

I should adore this time of year, the “boy of summer” that I most certainly am – and in the main, I do.

Despite being almost six weeks past the summer solstice, the days are still long - the evenings and (more importantly to me) the mornings light.

I took a long, leisurely drive around the surrounding countryside in a gloriously-lit late dusk yesterday (around 9pm), “watching ting”. (Little owls and rabbits mainly).

Despite our week of so of rain after a month or two of little to speak of, pastures are long, dry and brown. In fact my nearby little owl field, with its grass grown for sileage, has been harvested for the first time (I think) this year.

Despite our day or five of what I regularly hear as being unseasonal, but seems quite seasonal these days) high winds, our trees are looking glorious – verdant in a dark green (rather than the exciting fresh green of spring) and fully-leafed.

Despite orange tip butterflies (our more obvious lepidopteran harbinger of spring and summer) having pupated (they’ll be like that for 8 or 9 months now), others have replaced them. Second generation holly blues are now on the wing and they’ll be shortly joined by the new “crop” of brimstones, furiously-keen to gorge themselves on nectar.

Everything seems to beginning what I call their “helter skelter mode” – insects especially.

A few minutes spent watching our big clumps of goldenrod (awful, non-native, invasive stuff but a pollinator magnet) can reveal all manner of species – many different bees, solitary wasps, weevils, flies and butterflies).

A few (or more!) minutes spent crawling carefully around pink-bloomed willowherb may well result in a sighting of an elephant hawk-moth caterpillar – chowing down furiously before heading groundwards to look for a suitable spot to begin to pupate in a week or two.

A few minutes spent watching the skies at dusk (at the right places) will invariably throw up a bat or three – making hay still, whilst the sun (hopefully) shines and the moths are (hopefully) plentiful.

Rabbit kits are everywhere. Fox cubs are out and about. Young badgers are noisily enjoying themselves. Hedgehogs are fat and busy.

Then of course, schools are out for the summer. Everyone’s taking their hard-earned holidays. Us Brits are smiling. Weekends smell of barbecues and best of all… the football season hasn’t started yet properly in England yet (next week, unfortunately).

I do love the height of summer.

But for me, August seems always tinged with a great sadness. (I can’t just be completely happy or content now can I?!)

Adult cuckoos (a rare sight or even sound these days) have long gone, nightjars have pretty-well stopped churring round here (having had their only clutch of eggs or well into their second) and “my” swifts… well…. they’re off, basically.

Regular visitors (the two of you!) to this site will know about my obsession with swifts – and at this time of year, they’re all tending to head off south. In numbers.

Of course, they’re only here with us for about three-four months each year, a few in late April, then May, June, July and some in August.

(Chart below courtesy of BTO Birdtrack) 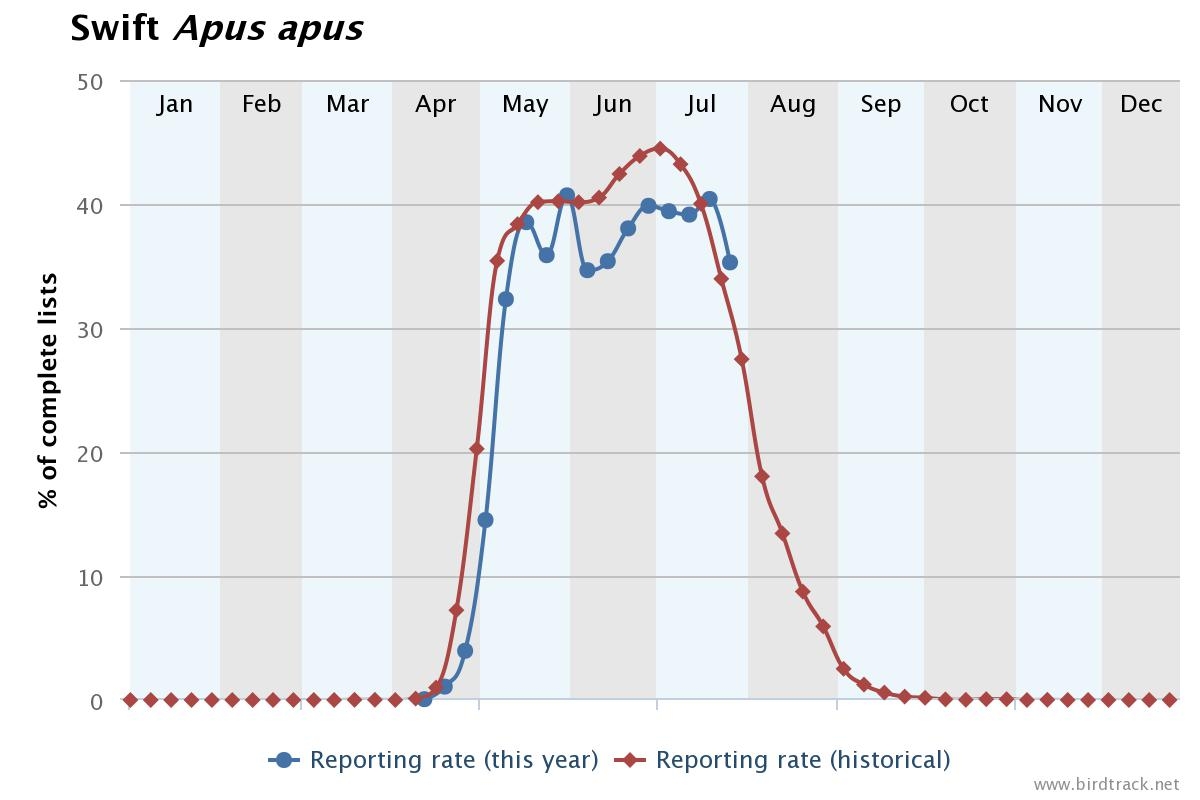 Each August, when our summer should peak, my heart sinks a little as I watch my favourite bird of all leave me again, for nine long months.

I think if I won the lottery (I should start playing really!) and my wife and son were up for it (and I could get someone to hen and cat-sit (that’s cat “SIT” by the way, you dirty child), I’d follow swifts all year long.

I’d spend 9 months in sub-Saharan Africa, marvelling at these small, chocolate-brown flying scimitar-winged devil-birds, return with them to Blighty at the start of May and head back to the Congo with them in August.

There’d be no joy in their return to me in May if I did that. No sense of anticipation. No jump in my heart-rate when I saw my first swift over British skies each year or heard my first swift scream in May.

I’ll just have to bid them farewell now (I’ll see them until September possibly, in very small numbers – the most northerly-breeding swifts always head back to Africa later than “my” soft southern swifts), enjoy the other things about August that I’ve mentioned above and make hay like everything (and everyone) else whilst I can.

We’re (my wife, boy and I) are off on our holidays soon – a few days camping in the beautiful New Forest (I do love it down there) with maybe a trip or two to the Dorset seaside. It won’t be the boy’s first camping experience, but it will be his first view of the sea  - how exciting  will that be?!

No – there’s no time (nor reason) to be sad in August, despite “my” swifts disappearing en masse.

See you next May eh?