A golden goddess of the night meets a hairy-eyed thing from The Underworld.

I’ve recently had my control box for my old moth trap replaced (for the second time – they’re not the most reliable of things in my experience) by the excellent people at Watkins and Doncaster.

I didn’t run a trap at all last year after my first trap broke at the beginning of the season, so it’s good to start bothering moths again this year – and see what’s flittering around the garden after we hit the sack each night.

We’re well into June now, rowing hard for July – and we’ve had a pretty good moth year so far – with more good nights to come looking at the long-range weather forecast (pretty uneventful really – settled(ish) and warm(ish) nights to come.

My moffy highlight so far this year has been a poplar hawk moth. No huge surprise really – we have a big, mature poplar in the garden and since we moved here almost four years ago, I’ve been growing three more of these trees – seeded from their “mother”, the eldest of the “children” being a stout, 15-foot tree already. When I was trapping moths in the garden two years ago, poplar hawk moths were relatively frequent discoveries each morning, but that doesn’t make this year’s specimen any less exciting – at least not in my eyes.

I adore evenings and nights down south at this time of year. The garden seems absolutely ALIVE in still, warm, summer evenings and nights here, with various beasties – both large (stag beetles, hedgehogs, hawk moths, bats) and small (all manner of smaller moths and insects).

Scotland might call strongly to me, but I’d miss the sultry, humid, still nights of Southeast England were we to head north – and miss the more “exotic beasties” also.

Oh sure, I am well aware that Scotland gets its own warm nights and its own “exotic” wildlife, but not in the same way as where I find myself living now and not with any similar reliability.

Scotland, for example, doesn’t get scarlet tiger moths, nor my favourite beetles (rose chafers and stag beetles), nor hardly-any (incredibly impressive) emperor dragonflies, nor any real numbers of a bee I love to watch in the summer down here, the big (Willoughby’s) leaf cutter.

Yes, it gets plenty of other stuff, but I do love my summer insects (and NOT midges!) down here in the warm, leafy “Home counties”.

[Some Scots might be reading this and be thinking: "aaahhh… but you don’t get golden eagles and pine martens (etc) down there". They’d be right of course, but I’d match your eagles and martens and raise you hobbies (in any numbers), yellow-necked mice and dormice, as a comeback.

Like I say, Scotland calls to me very strongly, but I’m a soft southerner really and England seems to offer my type of wildlife in greater abundance].

Last night was a good example of the type of evening I love down here. As regular visitors to this blog might know, we are lucky enough to have a successful, busy stag beetle ‘colony’ in our large, mature garden here. A colony dwelling in a system of rotting eucalyptus tree roots (the mature tree was taken down before we arrived – on account of it being a particularly silly tree to plant next to a house – they get HUGE, eucalyptus trees, annoying neighbours and destroying drains if planted in suburban areas.

I was in my element (again), rushing about the garden after the big stag beetles which emerged from our big woodpile (which I constructed over the buried eucalyptus roots). We get beetles leaving the colony each year (after spending perhaps three years under the ground as huge, juicy white larvae) and beetles helicoptering in – attracted by our females’ pungent (to beetles anyway) pheromones. 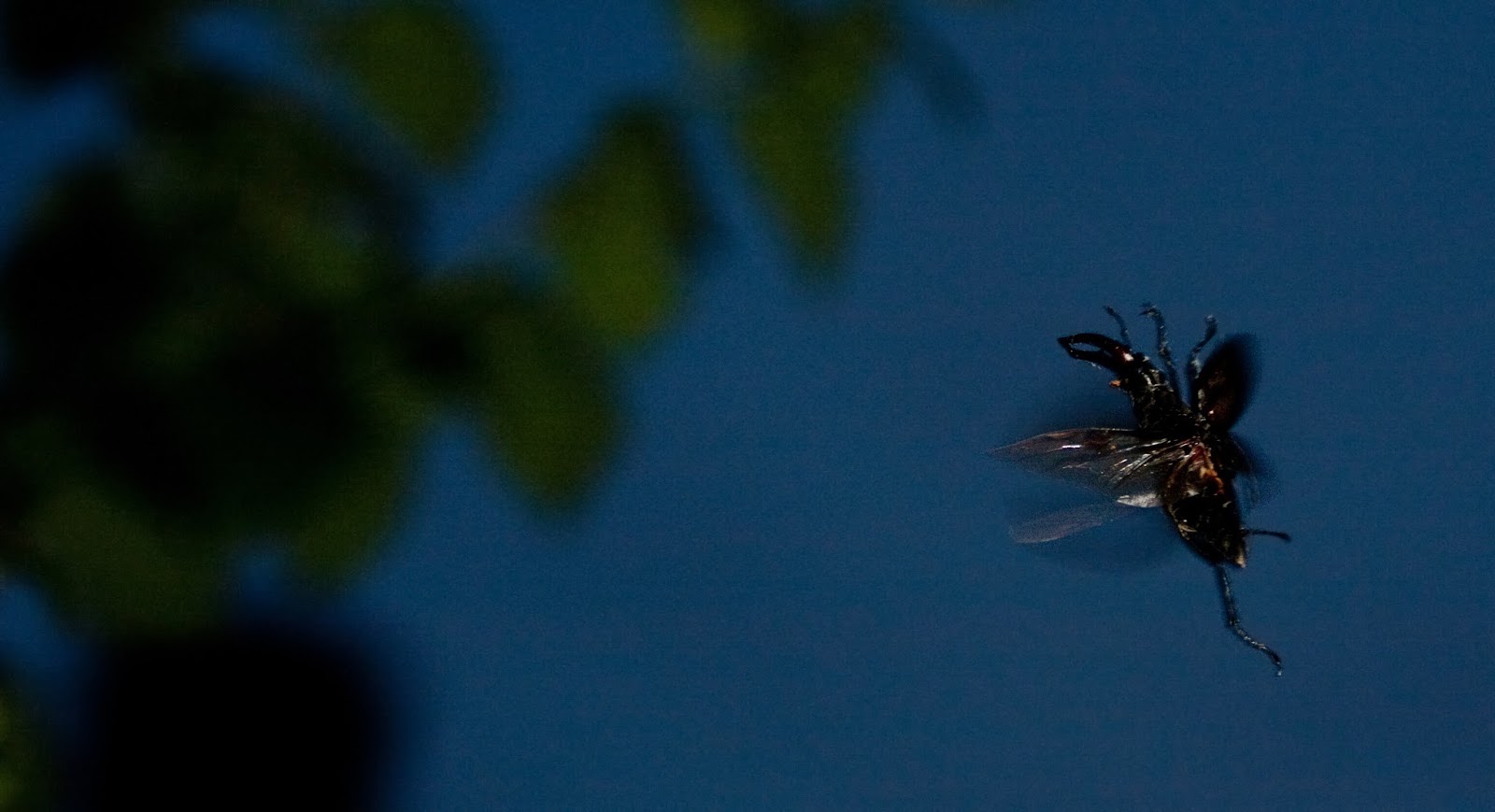 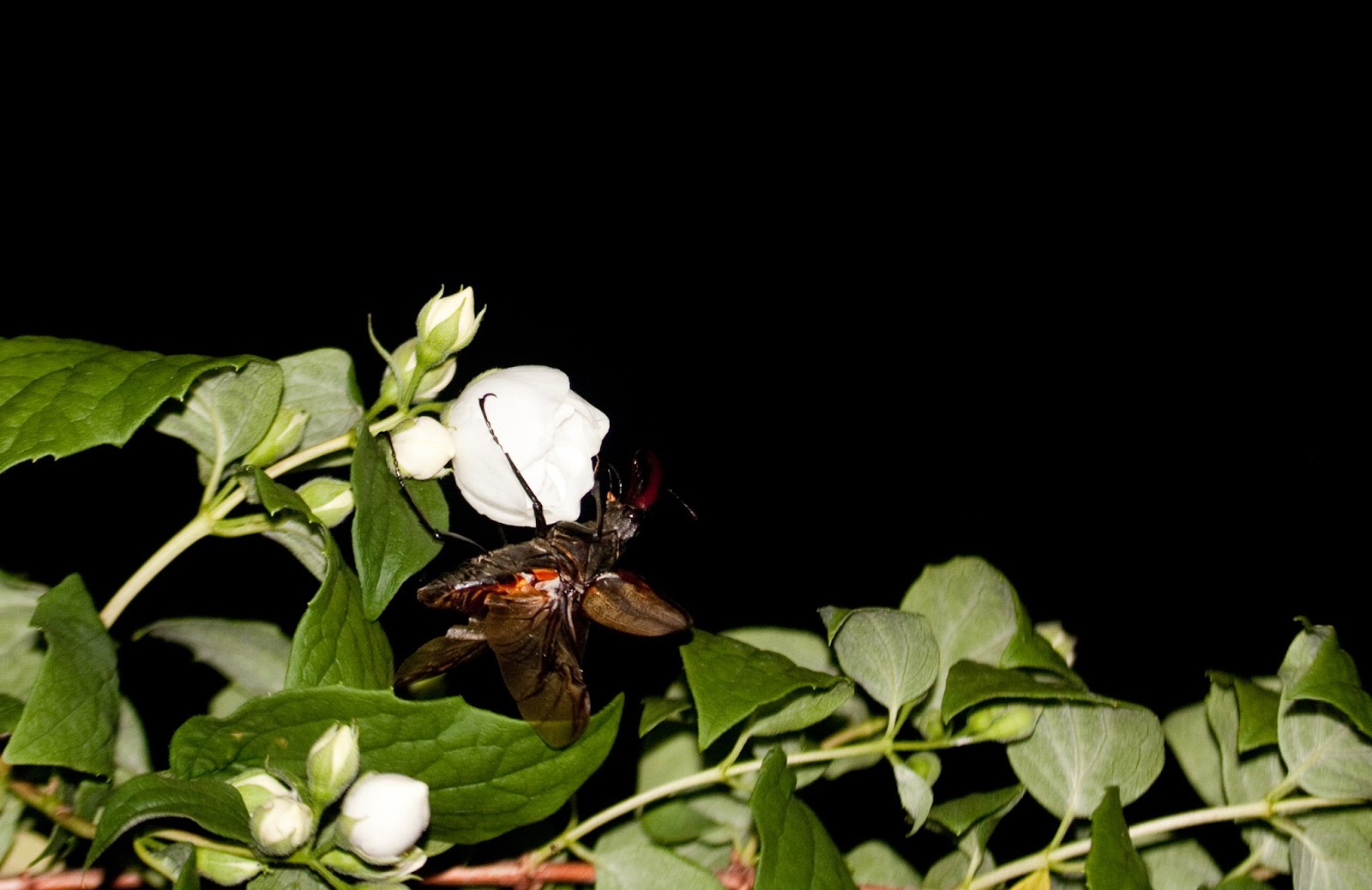 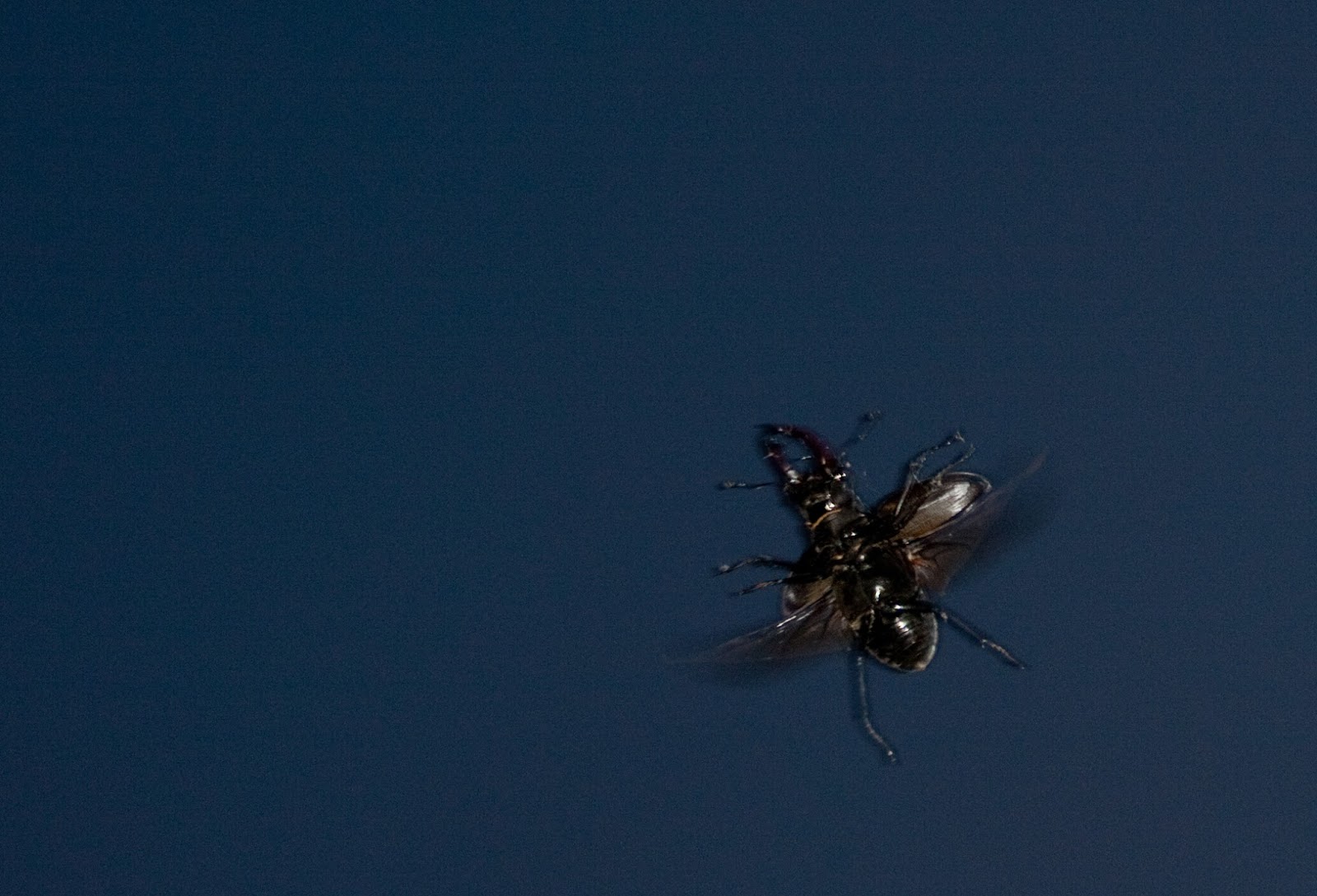 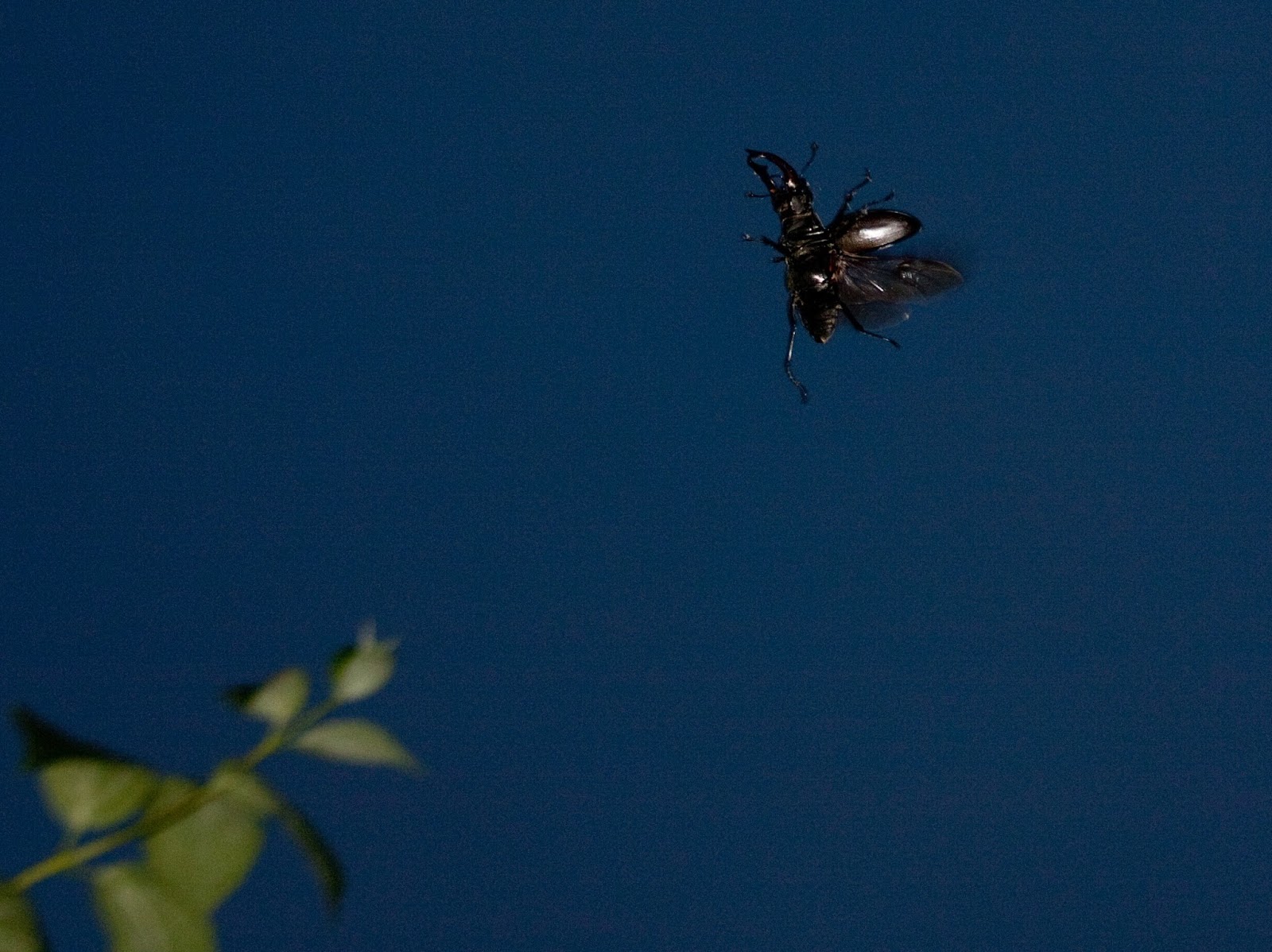 Anyway, back to moths… the whole (original) purpose of this particular blog entry after all.

Two highlights from last night (which incidentally, you CAN find in Scotland!).

One – The Lychnis moth.

Quite an insignificant-looking wee brown jobbie really – until you look closely.

This common moth is beautifully-marked and has a scientific name which means “Two-legged one of the underworld”.

The vernacular and scientific names of moths are often superb, really something else – so much more descriptive and interesting than birds’ names in general – it’s clear that the chaps (generally, not so-much chappesses in those days) who named our lepidoptera, were off their rockers!

Why is this little brown moth called “The two-legged one of the underworld”?

A) Hadena – meaning of Hades. Of the underworld.  Most moths have superposition eyes which produce low-resolution images for the brain to make sense of, but perhaps up to 1000x brighter than the images formed by the apposition eyes of most butterflies (for example) and most other diurnal insects.

It’s just that the Hadena moths have HAIRY eyes.

Sure, many insects have hairy eyes (for a number of reasons (to protect their eyes from getting covered in food (dung, pollen) for example) or perhaps no reason at all) but the moths of Hades (Hadena moths) seem a little peculiar in this respect.

I know that the Lychnis moth larvae feed on red campion seed capsules but I’m not sure if the adults feed at all – perhaps someone can put me right on this.

B) bicruris – meaning two legs. Obviously moths have six legs, but I am told that the “legs” on this moth (the crus or cruris (legs) are meant to give a nod to the two different types of stigmata on the moths’ forewings – the elongate reniform stigmata and the orbicular stigmata – probably the most noticeable feature on this moth’s wings.

So…whether you like it or not (I do I think), the Lychnis moth has a scientific name meaning the “two-legged one of the underworld (Hades)”. 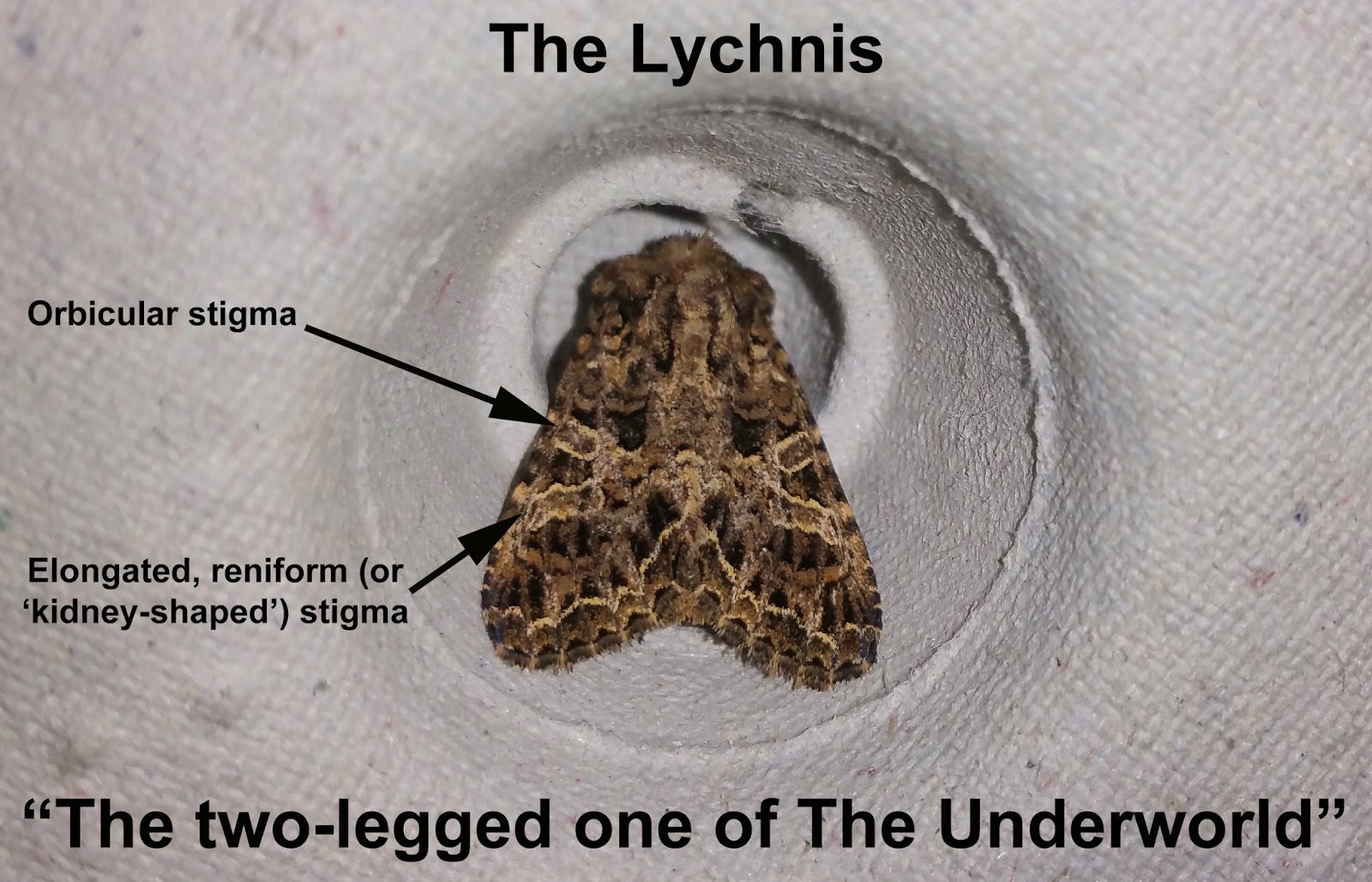 Again, not an uncommon moth at all, but unlike the brown Lychnis above, the barred-yellow is a striking moth, albeit small. Burnt-yellow in colour, with contrast in markings.

Unlike the red-campion seed capsule-munching larvae of the Lychnis, above, the caterpillars of the barred yellow tuck into dog rose leaves. I suppose we’re lucky that we have both red campion and dog rose in our garden.

So, as I’m waffling on about classical nomenclature today, what does the scientific name Cidaria fulvata mean?

I can only think of another “fulvus” animal, that being the griffon vulture (Gyps fulvus), although that is more tawny (at a stretch), rather than amber or golden but all that said, the fulvata in C.fulvata is indeed derived from fulvus meaning amber.

(Incidentally, Fulvo in modern-day Italian means reddish-blond or rufous too – knowledge of Latin really does help in modern-day life I think).

Cidaria is a different kettle of fish really – and another example of scientific nomenclature based on classical mythology.

Cidaria was an appellation given to the Roman goddess Ceres (goddess of agricultural fecundity) when she visited Pheneum (in Arcadia). Cidaria (Ceres) is often depicted wearing a wheat crown or tiara or “kidaris” (hence cidaria). I suppose, the markings on the forewings of the barred-yellow, could appear to look like a crown made of wheat (if you really screw your eyes up and take a puff of something strong!).

So… in short, the barred yellow has a Latin name which means “Ceres' tawny-coloured wheat tiara”. 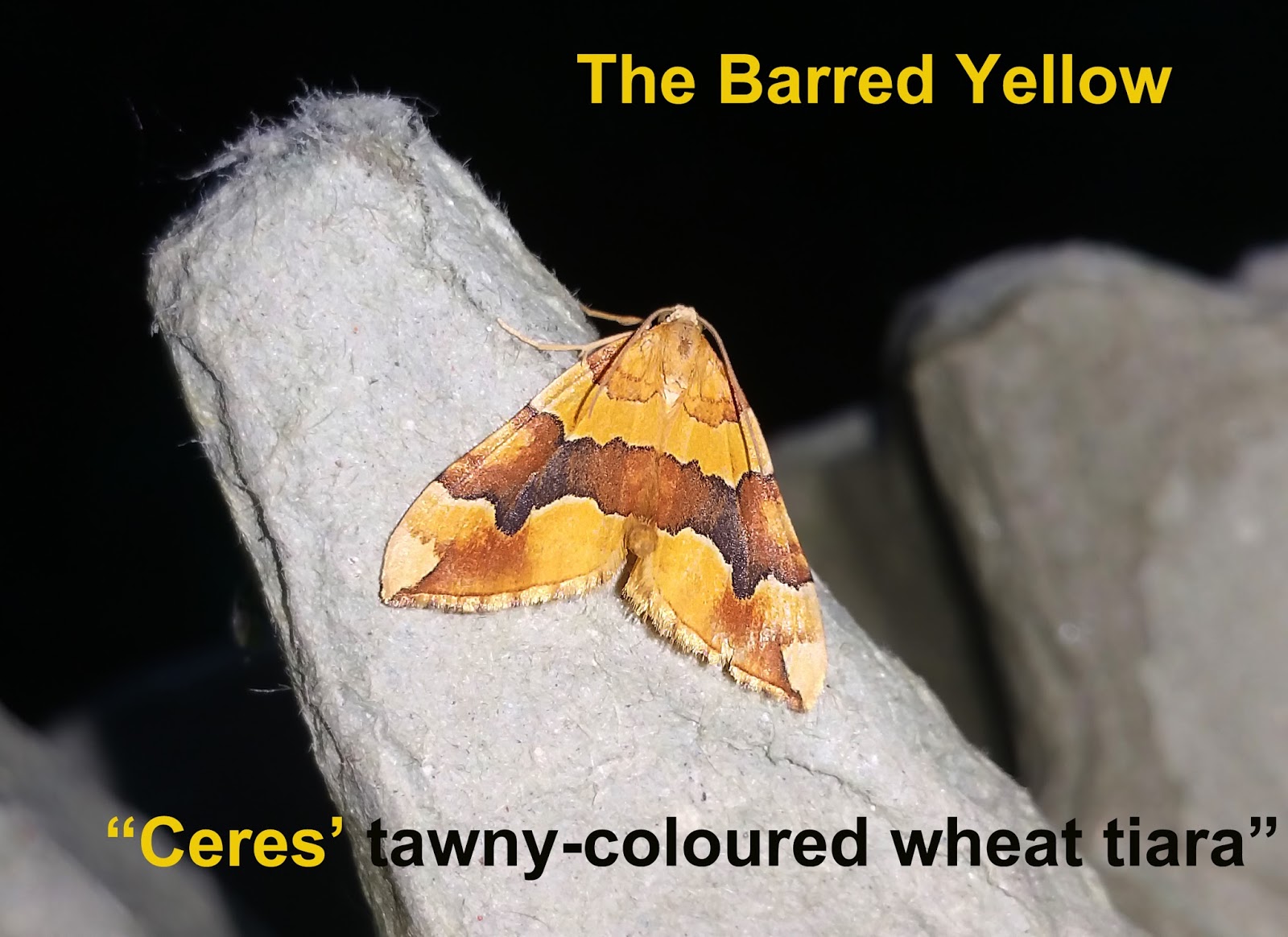 Right. This blog was only meant to take a few minutes this morning, but after rambling on again for an hour or so, my stomach is screaming for porage, so there I’d better leave it.

Until next time, grapple fans.