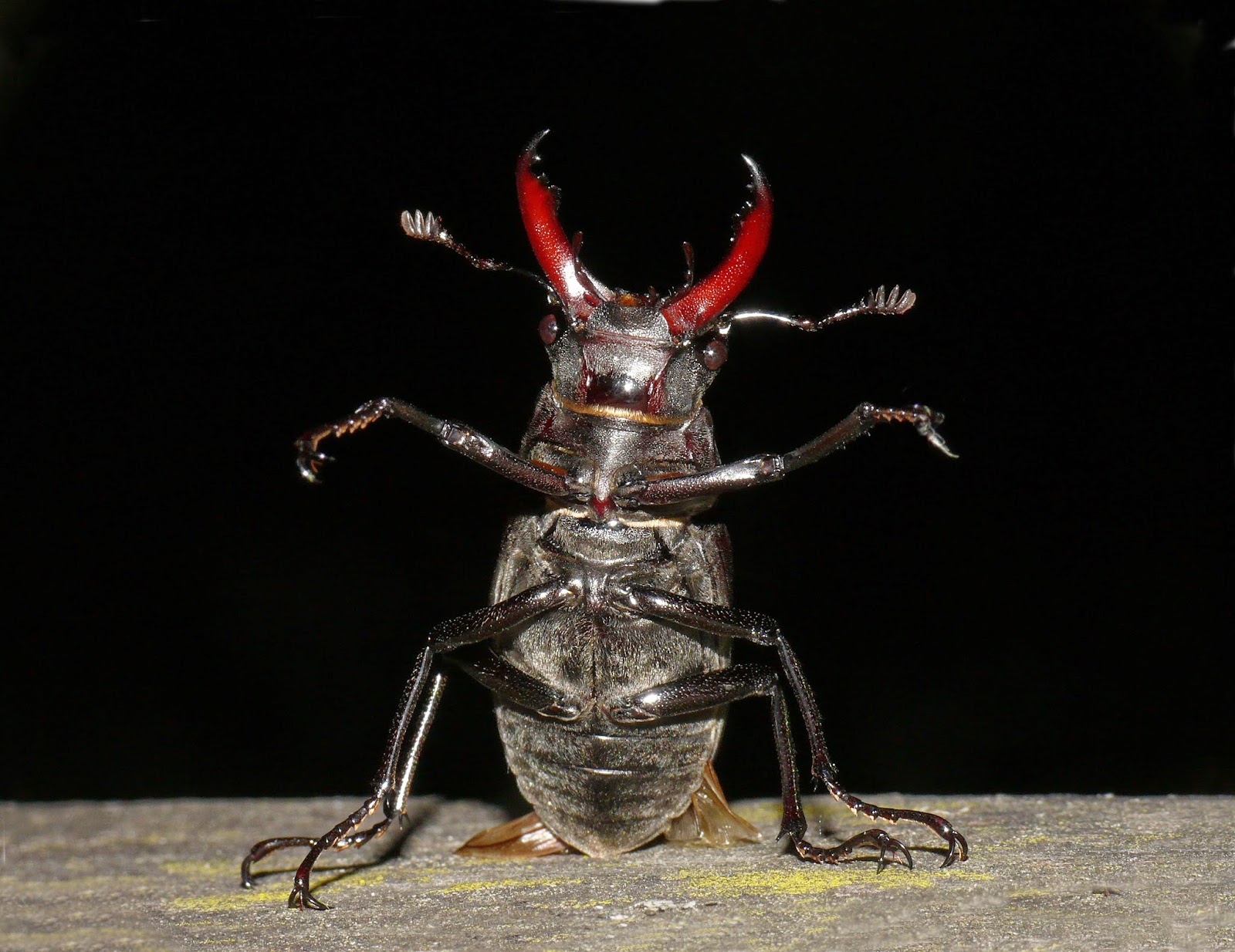 Sure, I love being outside, do like my wildlife and do try to make our garden as “wildlife-friendly” as possible, within the limitations of keeping day-time wandering cats and free-range hens. (The hens are the issue with wildlife-friendly gardens by the way, rather than the cats, but that’s a topic for another blog post).

I try to provide habitats for many things. Be that nesting birds including swifts (of course), nesting mason, bumble and mining bees, food plants for big moths and a pond with pond-side meadow for many, many aquatic and semi-aquatic organisms.

These habitats are developing. They’re work in progress (we’ve only been in the house with this large garden less than three years as I type), but they’re progressing well. Very well in the case of the pond which I dug in last February – that is a real success in our garden.

But sometimes I get lucky.

We bought this house and large garden in the summer of 2011 from an old widow who wanted to downsize.

It’s really nothing special – a 1953 built ex council semi-detached on the northern fringes of Bracknell, very close to large swathes of Berkshire countryside. I fell in love with the garden straight away – it had huge potential, and after giving the house a cursory glance over (and survey) we did the deal. For me based on the garden alone!

We’re discovering things in the garden every year and realised pretty soon after moving in that there was  a large rotting eucalyptus stump buried in the clay borders (its ALL clay our “soil” – Monty Don banging on about how poor his soil is in Hereford knows nothing about poor-draining clay soil!).

I was brought up in the chalky Chiltern hills of South Buckinghamshire, where stag beetles were far more thin on the ground  than in the more London clay soils and it wasn’t until my wife and I moved to a tumbledown house in clay-based South Reading several years ago that I even had set eyes on a stag beetle. 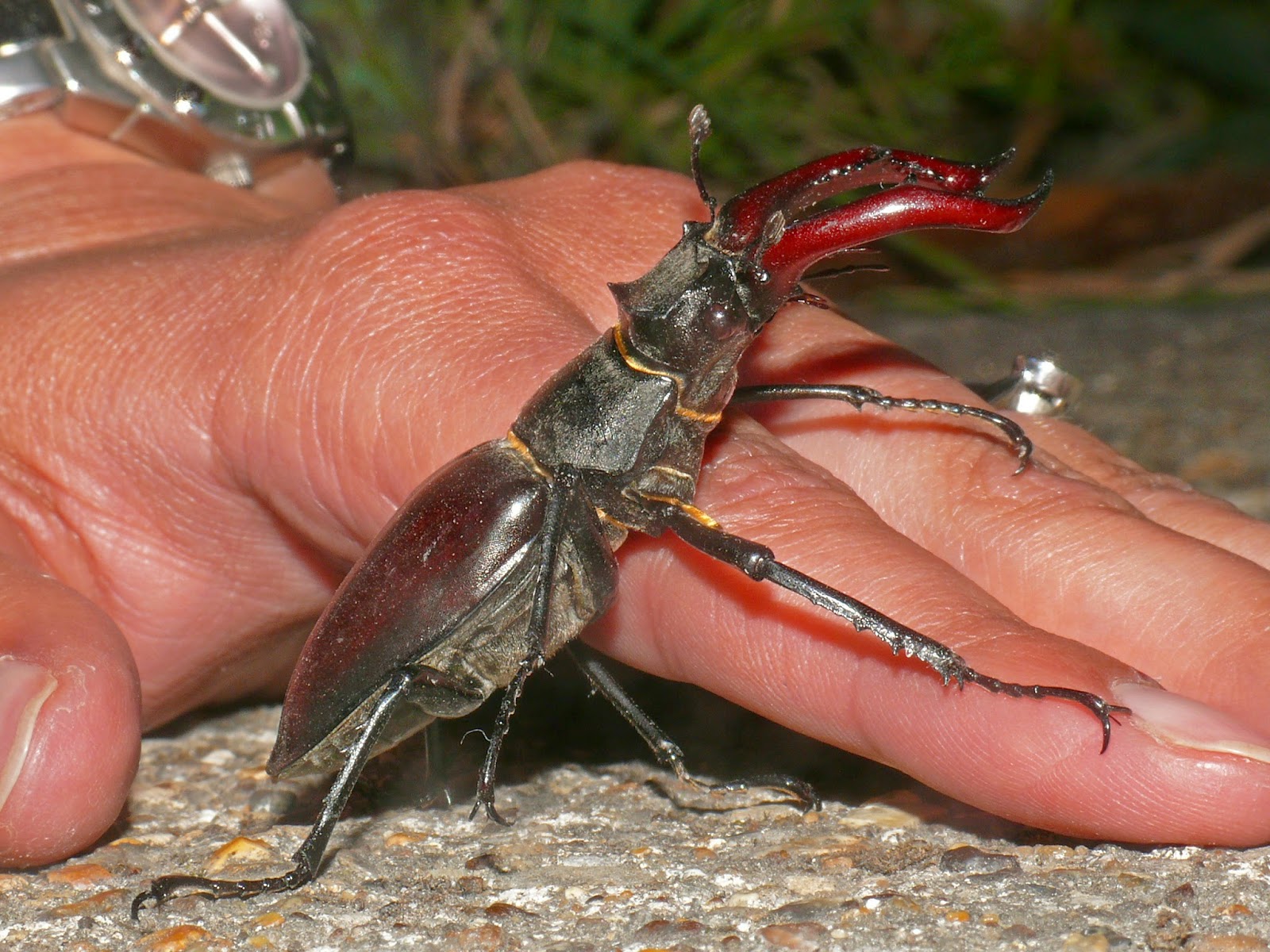 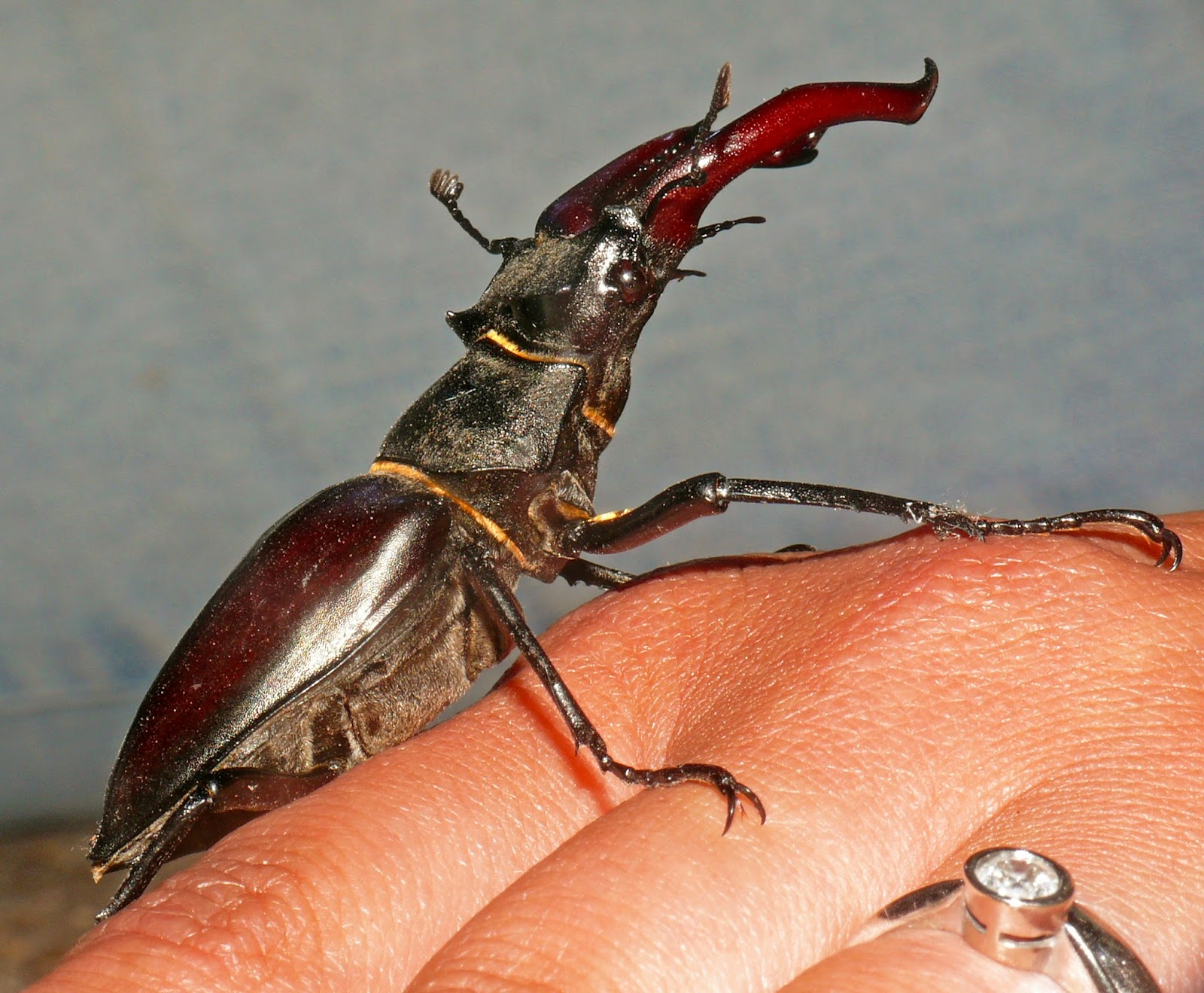 Now I know a little bit about wildlife; know that stag beetles (the gurt big ones, not the lesser stag beetles) love buried rotting wood and also know that they prefer clay rather than chalk substrate.  See the distribution map of stag beetles HERE.

I was very sad to leave our old house and garden in Reading and wondered if we’d left all the wonderful wildlife behind – including the stag beetles.

Would this rotting stump buried in clay soil 10 miles away from our last house provide us with the ultimate British summer-time beetle - the incredible stag beetle?

I didn’t have long to find an answer to that particular question – the summer of 2011 showed us that there were stag beetles in that stump – both lesser stag beetles AND gurt big stag beetles.

Since that summer three years ago, my wife and I (and soon my son I hope, when he’s old enough to stay up through a summer’s dusk) have been treated to yearly sightings of these majestic (and I use that word majestic very carefully) beetles. 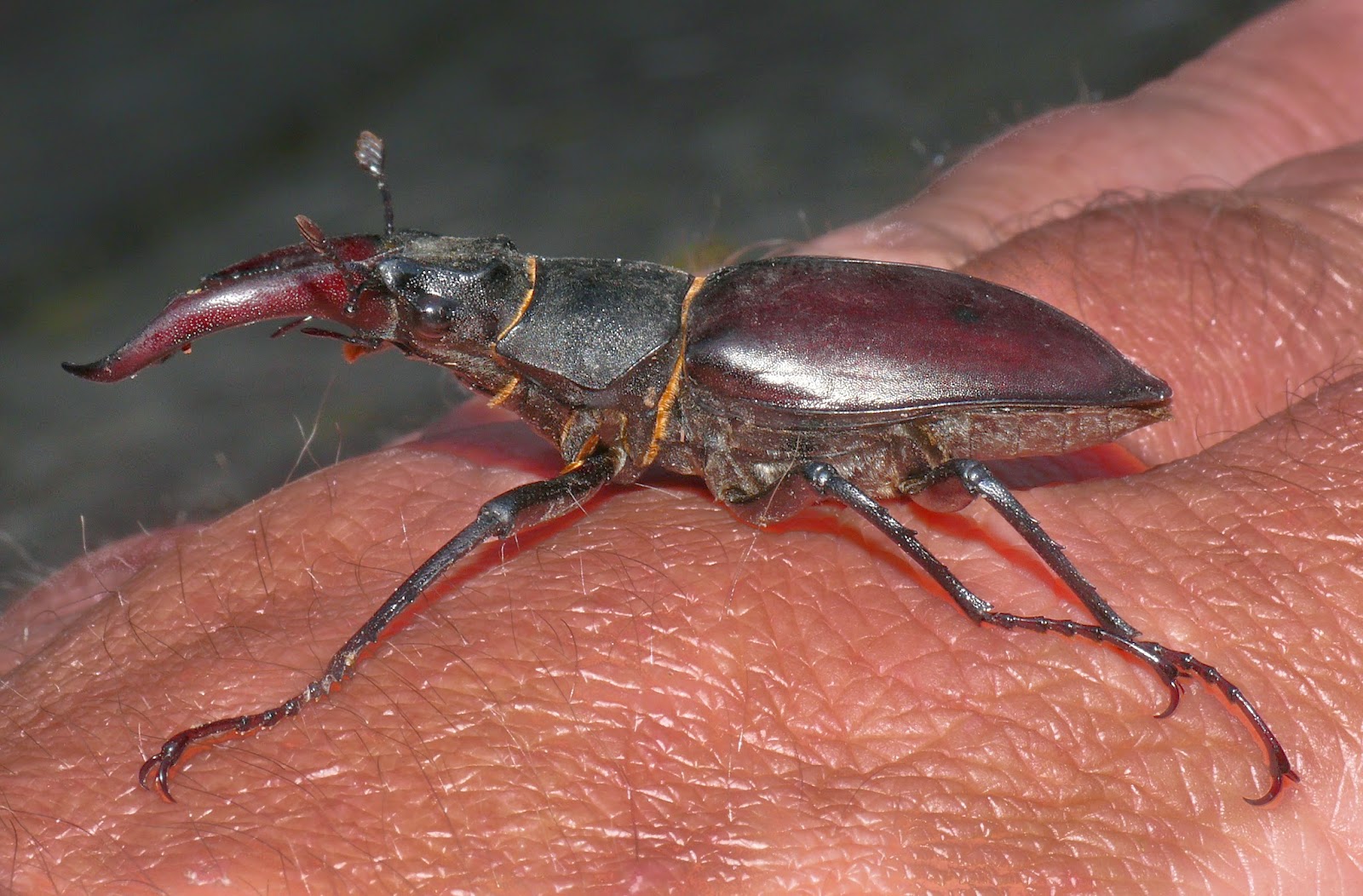 The battle I have with these beetles is to protect the developing grubs (they’re underground for 3-7 years before they develop into flying adults, a part of their life cycle that only lasts a few weeks) from our free range hens.

Our hens LOVE to scrabble in the borders – and you can imagine what they thought of this rotting pile of buried wood – stuffed it seemed with large, juicy stag beetle grubs.

Last year I cut down a large, mature hornbeam in the front garden because it had been dead since we took on the house and also to provide better access for swifts to my swift boxes on the gable end of our semi-detached.

Instead of binning or burning the resulting pile of turkey-tail fungus-encrusted logs – I carried them into the back garden and piled them all on top of our buried eucalyptus stump and roots.

This has had the effect of creating a lovely wildlife habitat and shelter for all kinds of wee beasties AND protects the buried stump below from the attention of our hens.

It’s worked magnificently I think – but the only reason it has worked as far as the stag beetles are concerned is that they were there in the buried, rotting stump before we moved in. I doubt the old widow even knew they were there – but I thank her for not getting rid of the stump. She’s done us proud in this respect at least.

Last night Anna and I were treated to not one, not two, but THREE male stag beetles flying clumsily around our log pile and eucalyptus stump.

This warm spring (unlike last year remember?) has brought out the big beetles in numbers it seems – we’ve had many cockchafers in the garden in May and also daily visits by the stunning rose chafers.

But the stag beetles knock those chafers into a cocked hat I think.

The adult male stag beetle (9cm) can be up to twice as long as for example a common pipistrelle bat (4.5cm), although admittedly the bat has much longer wings and is a master of the sky, whereas the beetle is awfully clumsy in the air.

They’re pretty fearsome-looking beasts with their huge “antlers” but docile as you like – gentle giants for sure – but looking like that, you can imagine they’ve picked up many reputations over the centuries and many names. 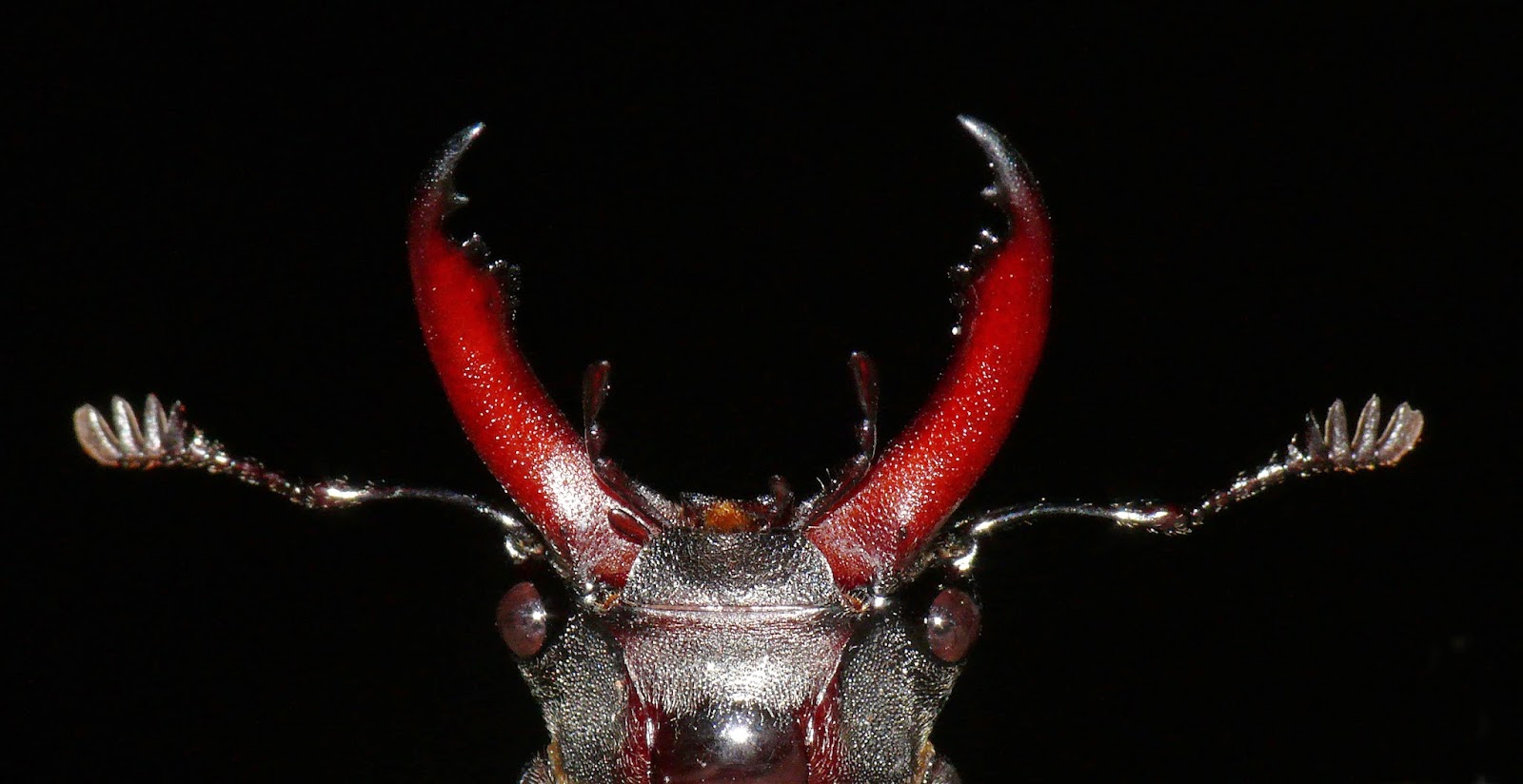 My favourite name for the stag beetle is the “thunder beetle” – it was thought they used to summon thunder and lightning (emerging on humid, still, warm, summer nights, you could understand why I guess).

The adult males fly in noisy, clumsy circles around their territories (our wood pile in this case) on warm, still early summer evenings in the SE of England (mainly) and last night was no exception down here.

I was rushing about the garden with two cameras and a torch, as male stag beetles bumbled noisily and clumsily around my head, crashing into the fence occasionally or into our border plants. 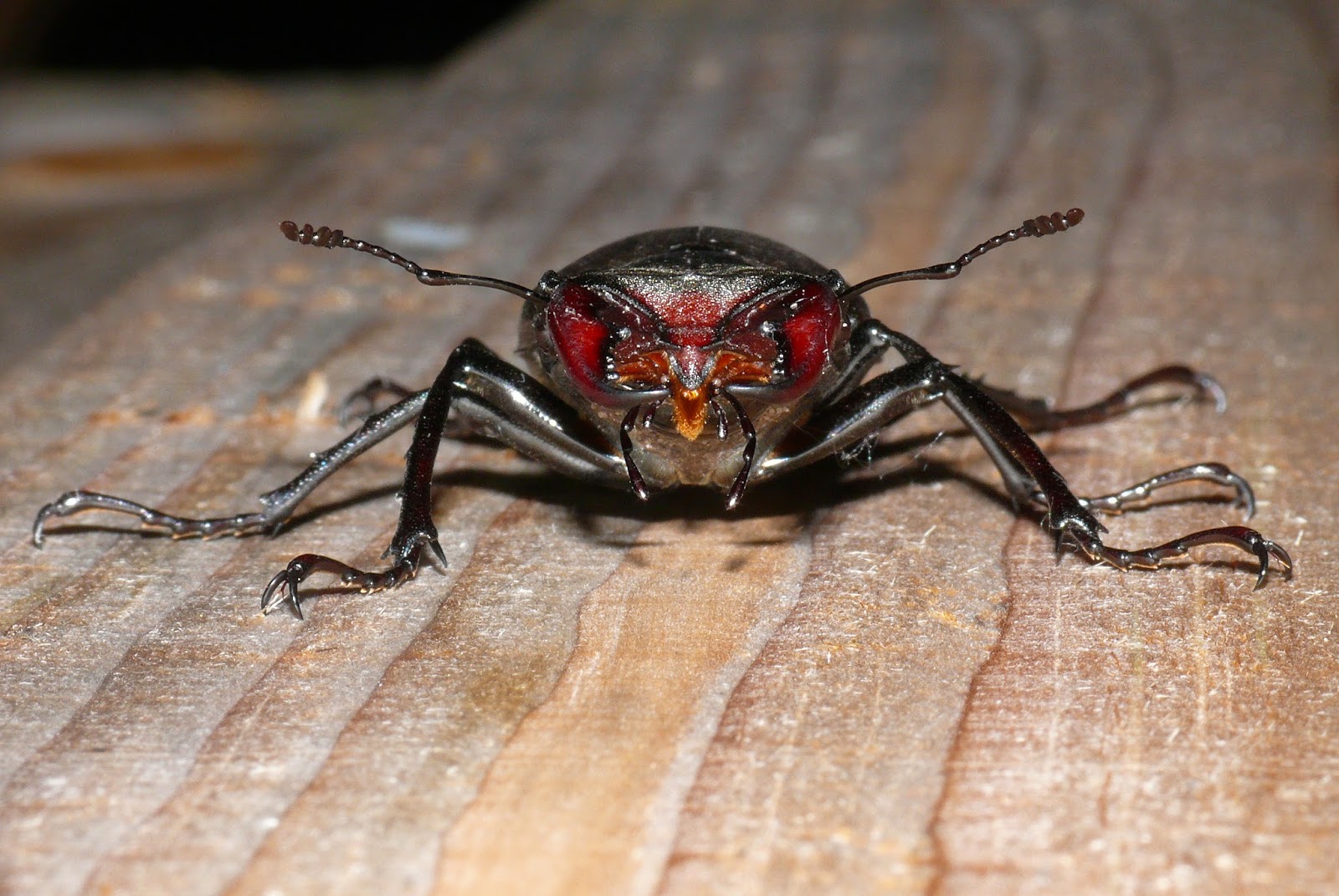 I was almost oblivious to the bats flying around the garden with the stag beetles and certainly oblivious to the giant mosquitoes which I see today have covered my legs (it was a “short shorts day” yesterday here) in very itchy bites.

I should point out that in the covering photo to this blog (heading the blog and posted again below); I had not “posed” the stag beetle. We had rescued it from our conservatory (it had flown in there by mistake), popped it on the garden table and it immediately adopted a very aggressive/defensive stance. I took a photo, it dropped down onto all six legs, opened its elytra (wing cases) and took off like a helicopter piloted by a drunk to continue its territorial flights. 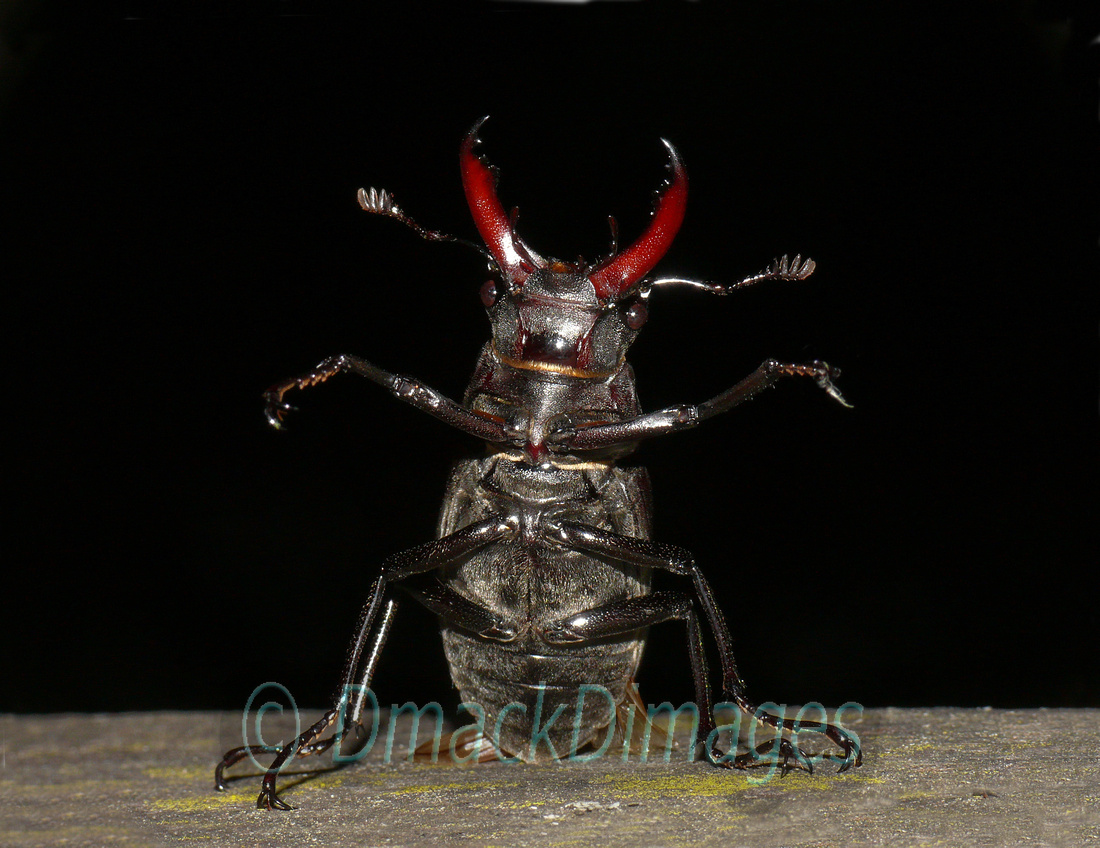 I got a few photos (as you can see by this post) and a video HERE (taken with my phone) – please watch to the end to see this beetle take off from the fence – and very nearly smash me in the face.

(Both it and I were fine by the way – thanks for asking).


Well. I was certainly thunderstruck yet again last night by these thunder beetles (which gives me a chance to link to my favourite ACDC track – a track that “fits” these beetles nicely!)

And I hope we continue to be thunderstruck for many years to come. 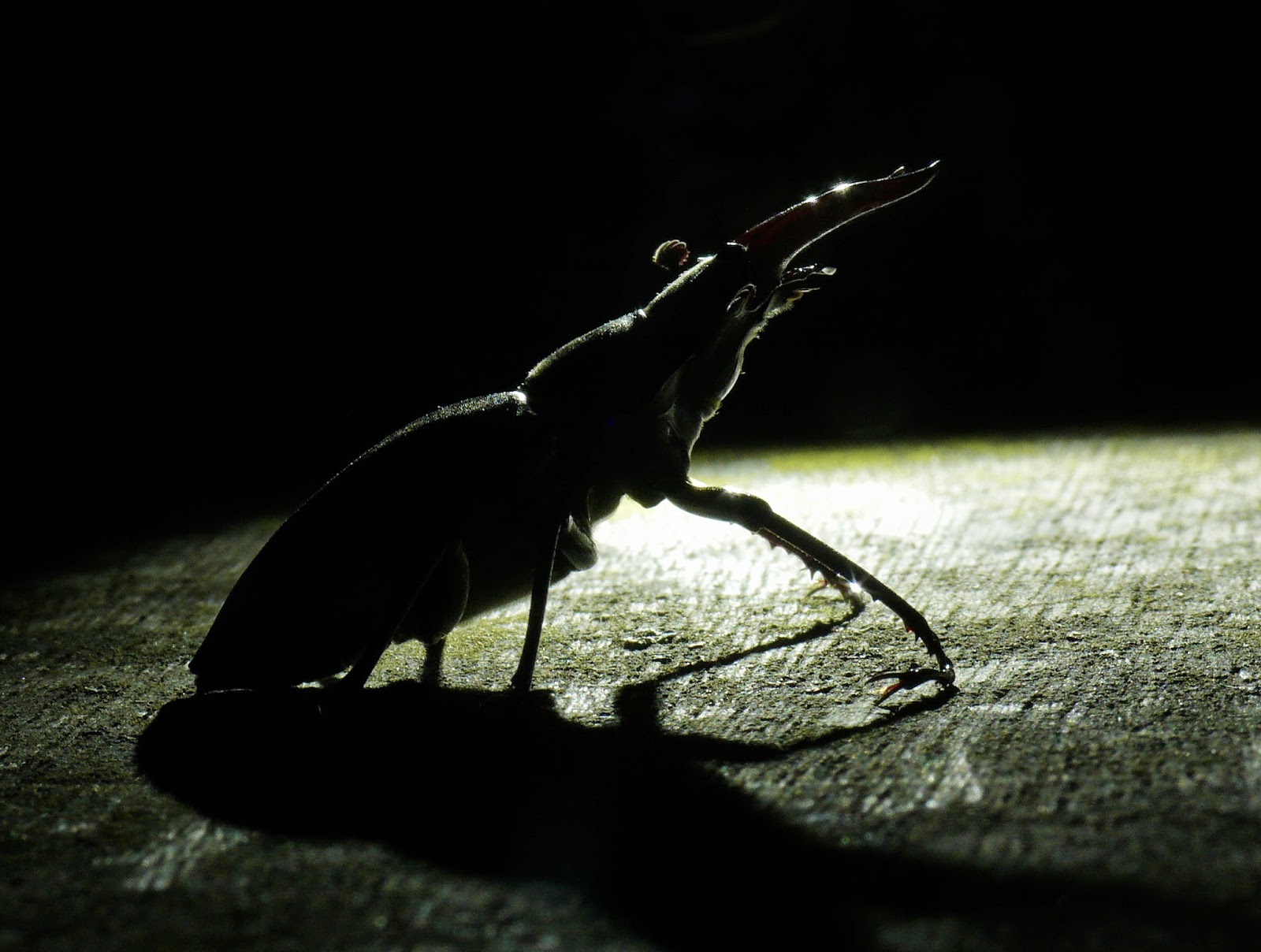 I see the BBC Wildlife Magazine this month  (Kate Bradbury in this instance) has produced a great piece on these beetles, with the help of “bugman” Richard Jones so if you want to find out more about these superb beetles, please buy a copy now (it’s the  “Summer Special” BBC Wildlife with the red-eyed tree frog on the cover.