The 51st Wildlife Photographer of the Year Competition (2015). A breath of fresh air.

Regular readers of this blog might know that I don’t seem to have the time or energy these days to take many wildlife photos of my own, like I used to before starting to raise my (soon-to-be three year old) son.

I certainly don’t seem to have much time to plan shots (train “our” jays like I used to, or hunt down secret local sites to photograph specific beasties like I used to also do).

As for entering competitions – nope – no time for that these days either, although I perhaps should also say I haven’t exactly been inspired to enter competitions for a year or two after being disappointed with many recent results of recent competitions.

Same old people photographing the same old stuff, in the same old way, that either they or countless others have been doing so for years.

You’re right by the way. And that was deliberate.

But I always like to see the winning and finalist images of certainly the biggest wildlife photography competition there is – the Wildlife Photographer of the Year (which I never have entered – never thought my photos were good enough, despite what some very generous commentators have suggested to me).

Last night, at the Natural History Museum in London, this year’s WPOTY winners (and finalists) were announced.

The subtitle of this blog entry is “A breath of fresh air” and I truly mean that. As the results were announced between 8pm and 10:30pm (ish), it became more and more obvious to me at least that this year’s competition was the best yet.

Ahhhh Doug…. They ALL say “the best yet” don’t they?

And yes… I really think this year’s results made this year’s WPOTY the best for years and years – perhaps the best ever.

I don’t remember a WPOTY where I have been so bowled-over by more than a handful of images- hoping that any one of them would win. Normally I pick a favourite elephant in the sea of sharks and big cats and sort-of hope that does well – but I had real trouble picking one favourite this year.

Why? What was so great about this year’s results?

See for yourself here.

But in a word for me – this year’s crop were so ORIGINAL. 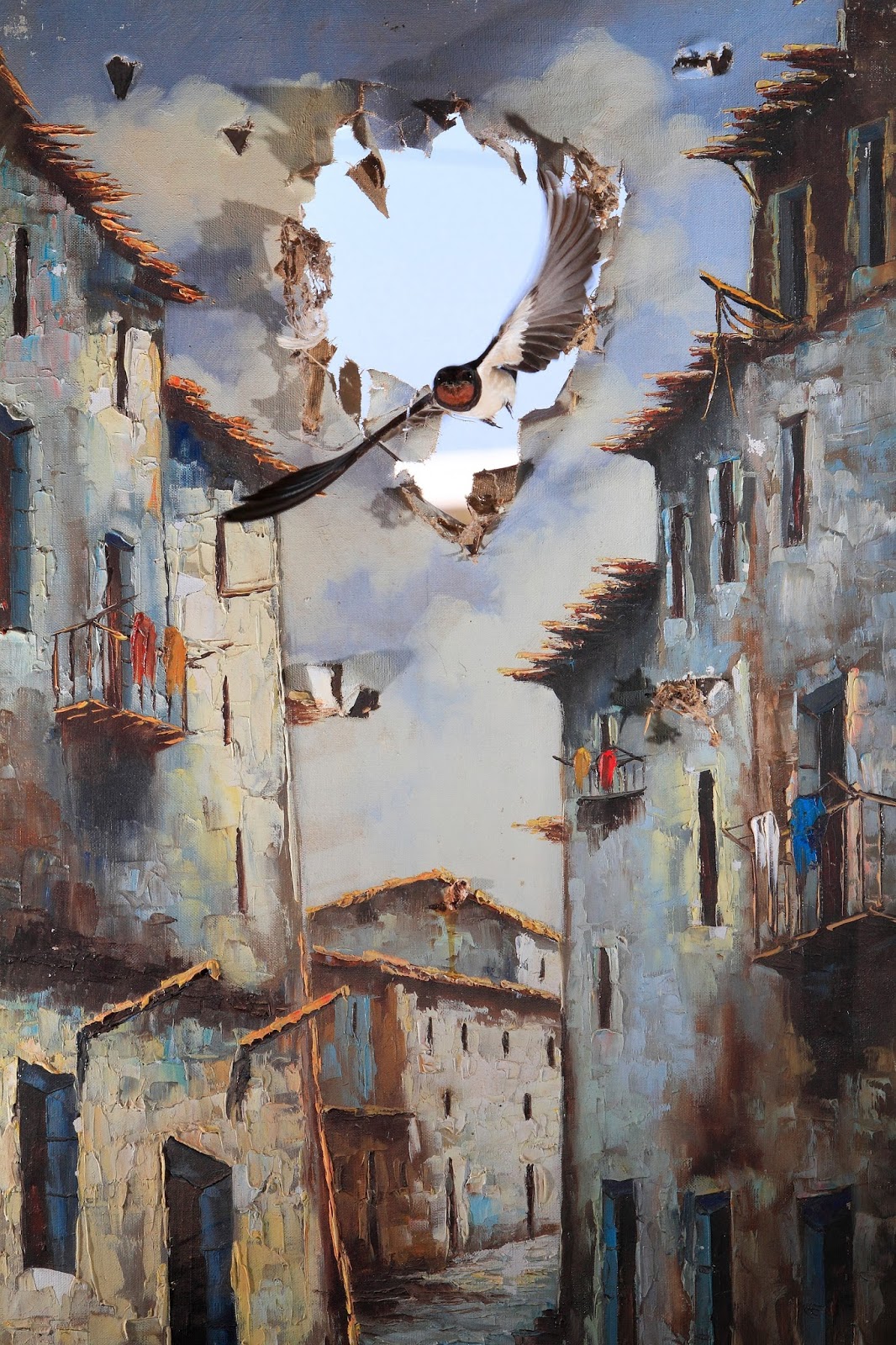 You may have to look at this photo… this PHOTO…. twice.

Then once more perhaps.

Still don’t quiiiite get what you’re gawping at? Then click here to visit the description of this image.

Someone will certainly have to tear me away from this photo when I visit the exhibition.

A swallow, photographed flying through an oil painting to produce a sublime, an absolutely sublime work of art.

For the photographer to even think of this and then have the technical nous to pull it off is incredible to me – as incredible as the final image.

I have never seen a wildlife photograph like this… it’s completely unique – and I dare say I won’t ever see an image like this again.

Almost certainly my favourite of the bunch last night. 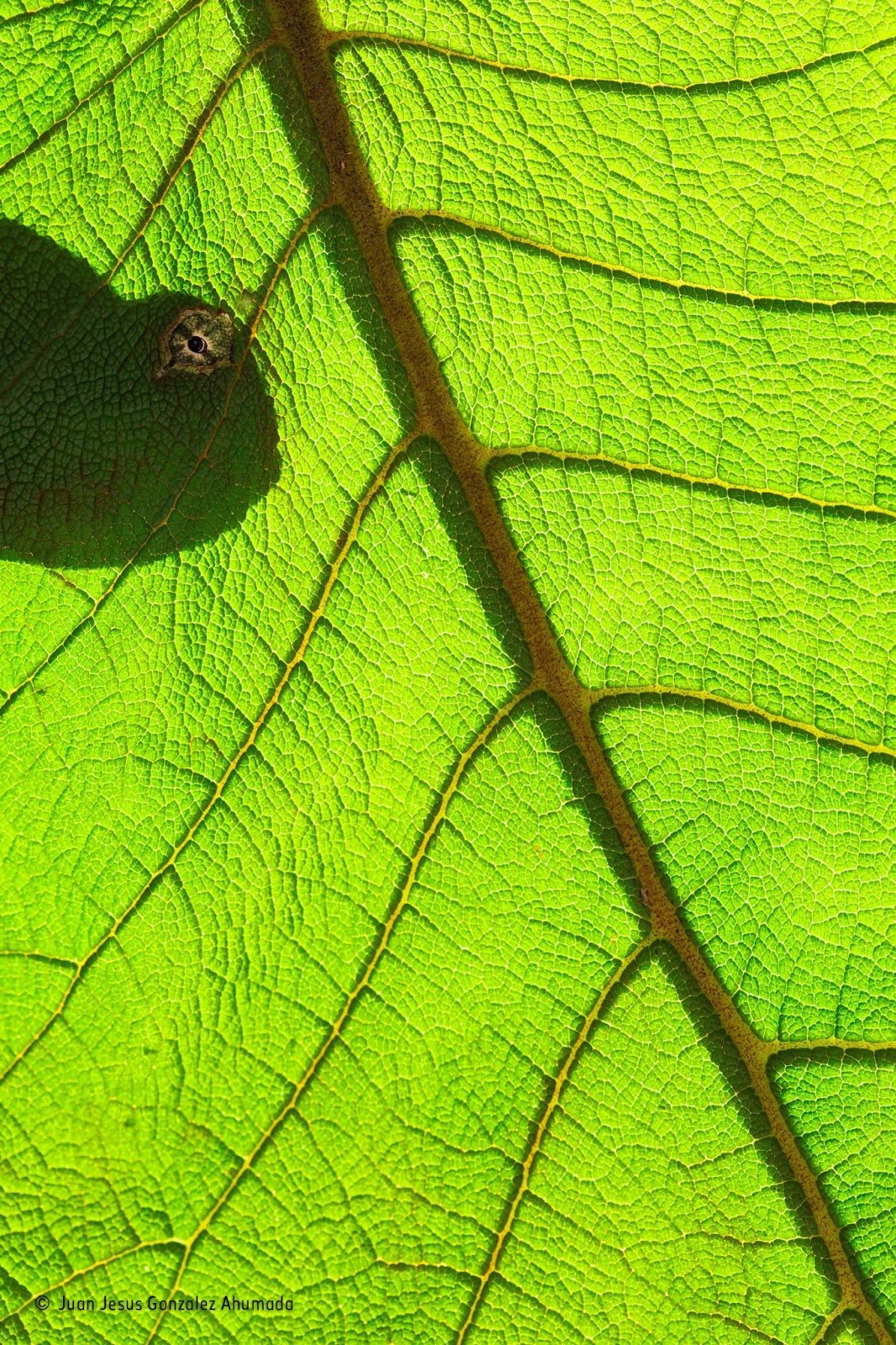 Again, a double-take might be necessary here, but once again, if you still can’t quite guess what you’re looking at… click here to see a description of the shot and how it was taken.

I adore shots like this. Even though a lot of this frame isn’t strictly-speaking covered in negative space, it might as well be. Just green texture… with something in the top left corner.

Something similar to the rest of the frame… but different, something recognisable…but something slightly alien.

Again the skill (and perhaps patience?) of the photographer here is jaw-shattering to me at least – and the final image ticks every one of my boxes.

I could look at this image all day long – if only for the rich green – but there’s SO much more to it than that. 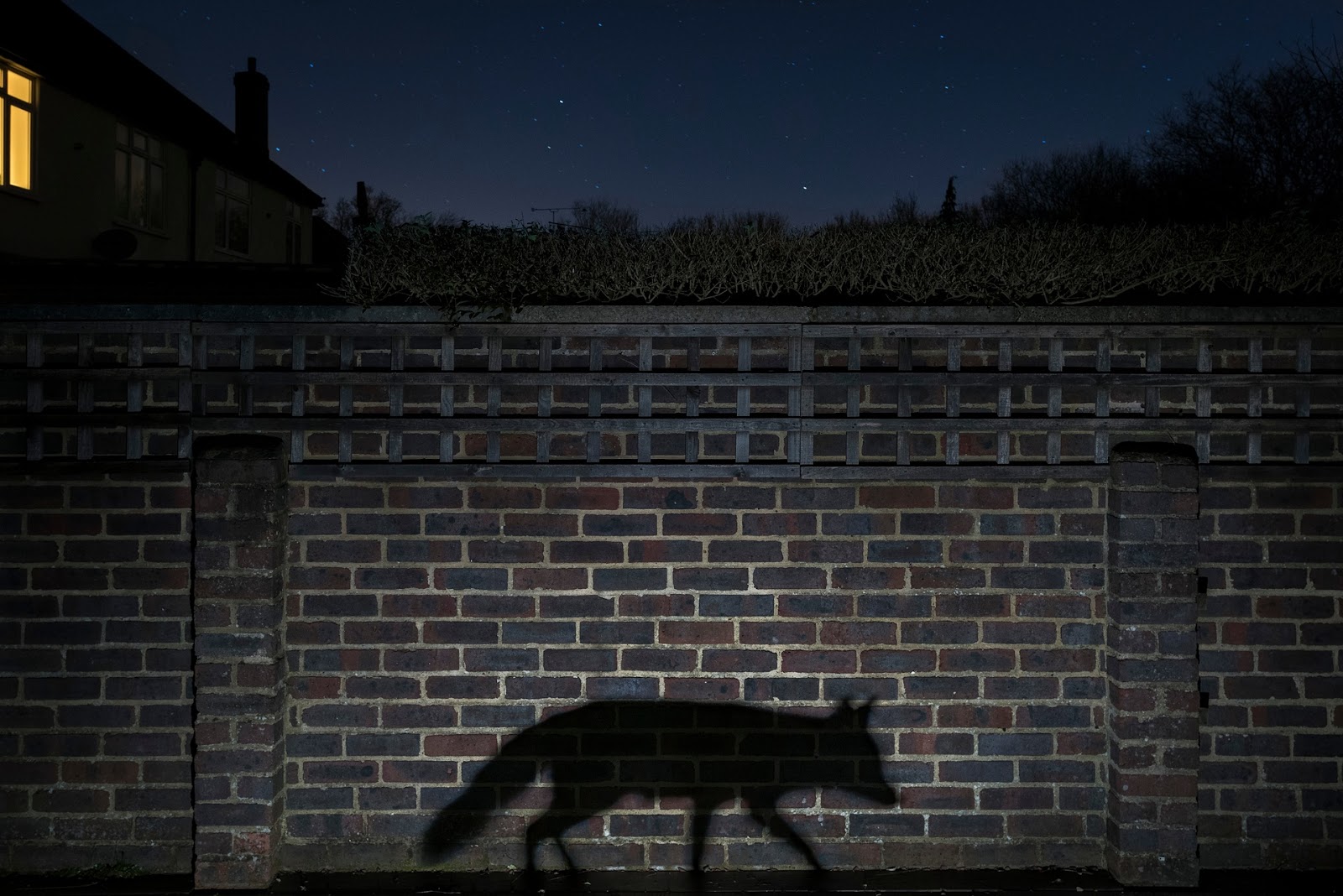 I’m exasperated with photos of urban foxes. Everyone is photographing foxes under streetlights and by discarded takeaway boxes or bins.

THIS photo is different though.

I just cannot be bored with this photo of an urban fox – how could I?
Firstly it’s utterly unique again (I’m not sure, but I can’t remember a winning photo in a wildlife photography competition where the live subject of the photo ISN’T EVEN IN THE FRAME!).

Secondly, it’s very, very well done – everything is perfect. The wall is perfect (did the photographer clean the wall first?!), the stars are perfect, the lit window top left is perfect, the timing is absolutely perfect.

This shot will have taken a great deal of visualisation and planning – and the result is to die for.

Finally an urban fox photo that is quirky, atmospheric and utterly unique. 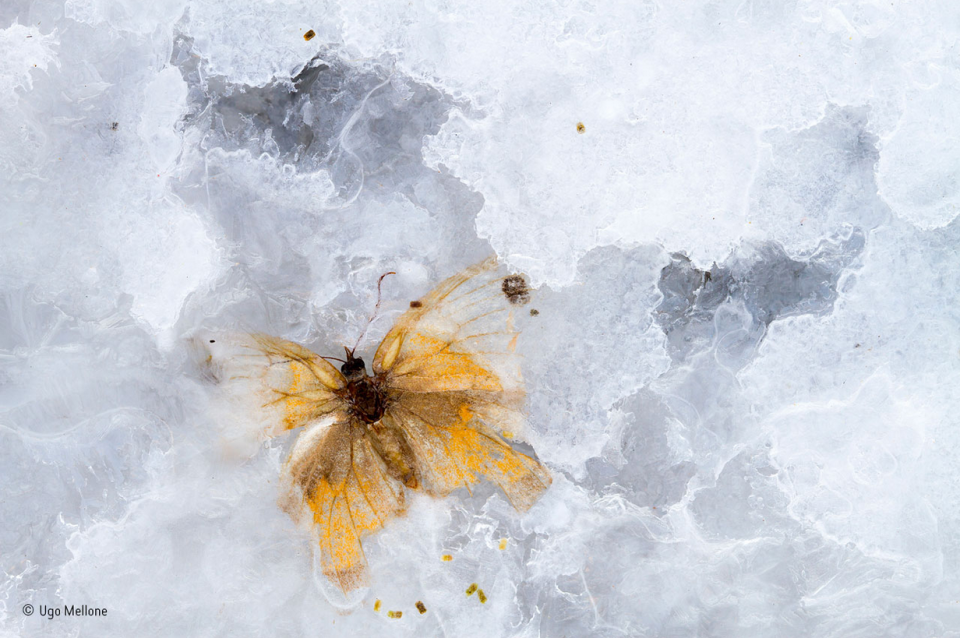 Just a shot of a dead butterfly in snow right?

Well… yes…. I suppose so. (Although the ‘snow’ is actually crystalline salt).

But I have always maintained photography is ART – it should bring about an emotion or feeling or strong line of thought from the onlooker - be that an immediate sense of calm, or revulsion, or pain, uneasiness (see shadow walker above), sadness, introspection, extrospection, happiness or joy. Something. Anything.

Forgetting the notion that this shot might bring about a clichéd sense of sadness – this shot for me is SO much more than a sad shot of a dead butterfly in salt.

It’s more about life to me than death. About time. Life’s brevity. Purpose. Reason. And only then ultimate mortality.

This photo gets me thinking. Gets me really thinking. Not generally a good thing!

It’s a beautiful photo … of a dead butterfly in salt!

The more and more I look at this shot, the more I notice the finer details and composition – it’s a belter of a shot but will be written off as a photo of a dead butterfly by many who might say “how hard can that be to photograph compared to a leopard grappling a gazelle for example”.

I could (again) look at this shot and be completely absorbed in my own world for hours.

And that… grapple fans… is ART.

How easy is it to produce really good art?

Not easy at all I’d say.

I’ve always maintained anyone, that’s ANYONE can draw (I remember walking around the SWLA winners’ exhibition at the Mall Galleries recently and saying that to my brother-in-law who didn’t share my opinion. I should have been clearer really – anyone can draw (and everyone SHOULD!) but not many can produce good art. Maybe we might have agreed then?).

Likewise with photography – anyone can take photos. Anyone can photograph a dead butterfly can’t they?

Would they THINK of doing so?

And then would they shoot it so beautifully?

No I’d say. No chance. On both counts.

In fact I’d say they’d be more likely to photograph that leopard grappling that gazelle than the static butterfly. And they may get a half-decent shot. Which would do less for ME than a shot of the static, dead butterfly they’ve probably not even seen.

Oh sure… only when a very talented artist has done it first and opened your eyes for you.

Blimey, I’m really waffling now – this was meant to be a brief summary of a few thoughts! 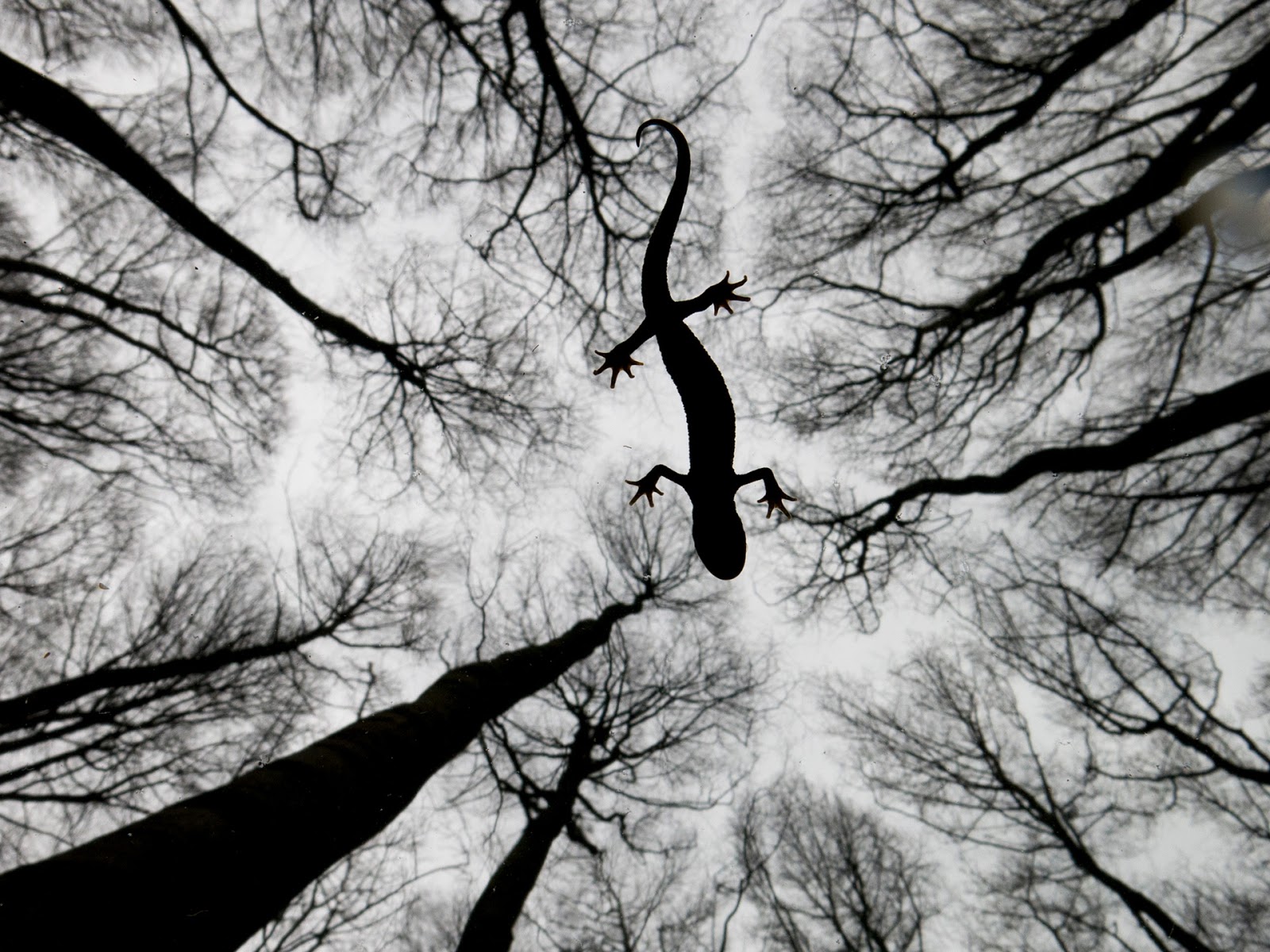 I’ve seen a similar shot win (or be commended) in another competition.

Might have been the BWPA (British Wildlife Photography Awards)… I can’t remember… but the shot was of a toad in that case, not a crested newt.

The skill involved in shooting a toad or newt from below, in water, with a perfect background is something I could only dream of.

What a fantastic inspiration this shot is then!

It’s basically a shot of a newt in a puddle, but taken with such care and technical expertise that it produces a spellbinding image – something again that almost looks unreal.

I have a pond.

So I could do this?

The newts in our pond are flighty wee beggars – I’d be out there for years – and still I’d not get a shot like this.

This is an immense shot of a tiny newt in little more than a puddle.

Right, I’d best leave it there, as like I’ve already written… this was originally meant to be a brief blog.

I’ll summarise the above by saying whilst I’ve gone into considerable detail about a few winning or finalists’ shots above – I could have picked many more.

I haven’t even mentioned the overall winner – you can see all the shots here and pick your own favourites.

What I’m most pleased about with this year’s results is that the judges have picked many arty images rather than what I’d call purely subject-based photographs to make off with the prizes.

So -  this year, amongst the “oooh… that’s a nice elephant/gannet/penguin/whale/fox” shots we have a whole variety of images chosen which make us, the onlookers, THINK.

We have (for the first year that I can remember) a series of winning images that could certainly be described as art – and so right up my street.

We have images that provoke a strong reaction from the onlooker (shameless link to my most (in)famous attempt at something similar), quite often a reaction OTHER than “ooooh… that’s a purdy view”.

We have a series of bold images, left-field images, clever images as well as images that simply (only) need a £10,000 set up to take (with very little imagination behind the lens) – and have probably all been taken before anyway.

We have real inspiration this year.

We are now looking at our cameras and thinking what WE can do with them.

How can we be different?

The bar this year has been raised several notches and...

we do indeed, this year, have…

A breath of fresh air.

These are my personal views only of course. I fully expect most people to disagree!

Many, many congratulations to all the photographers who were shortlisted, won or were merely “finalists”. You have inspired this old dog for sure.

So many thanks for that.

Now just to find some time!