"Because the night" was a song (that I like) originally recorded by Bruce Springsteen in the late '70s, but dissatisfied with it, the Patti Smith Group released it instead in 1978 (so that might explain the slightly strange title of this blog post I guess).

What with the "Mars rover" being all over the news recently, the fact that Neil Armstrong died last night at the age of 82 (about 43 years after his "One giant leap for mankind" and also the fact that when I rose well before sparrowfart today, Venus and Jupiter were VERY impressive in the eastern night sky, I thought I'd pen a few words on the night.

I've carried out plenty of shift work in my working life so far (although thankfully those days (or nights!) seem to be a thing of the past now my hair is turning grey!) I've also had more than a passing interest in classical mythology (I suppose my parents gave me that interest) and have always been fascinated by the night sky, the moon, planets and why and how the stars were named.

I'm certainly no expert (I was "working" at night after all, not "star-gazing" all night) but I can name quite a few stars in the sky, know roughly when the major meteor showers occur and enjoy peering at planets, other galaxies, the Shuttle (when it was flying) and satellites (such as the ISS) from time to time.

Yes... Venus (especially) was very impressive as the "Morning star" before dawn this morning and as skies were clear and I was up and about, I thought I'd take a few photographs.

I'll leave the first photograph with just the compass points and horizon marked on the image below - see if you can name any of the points of light on the image below and then scroll right down to the bottom of this post to see the same image where I've pointed out the more well-known of them for you.

NB. If the image here isn't large enough for you, please click HERE and then once more on the image itself to see it full size. 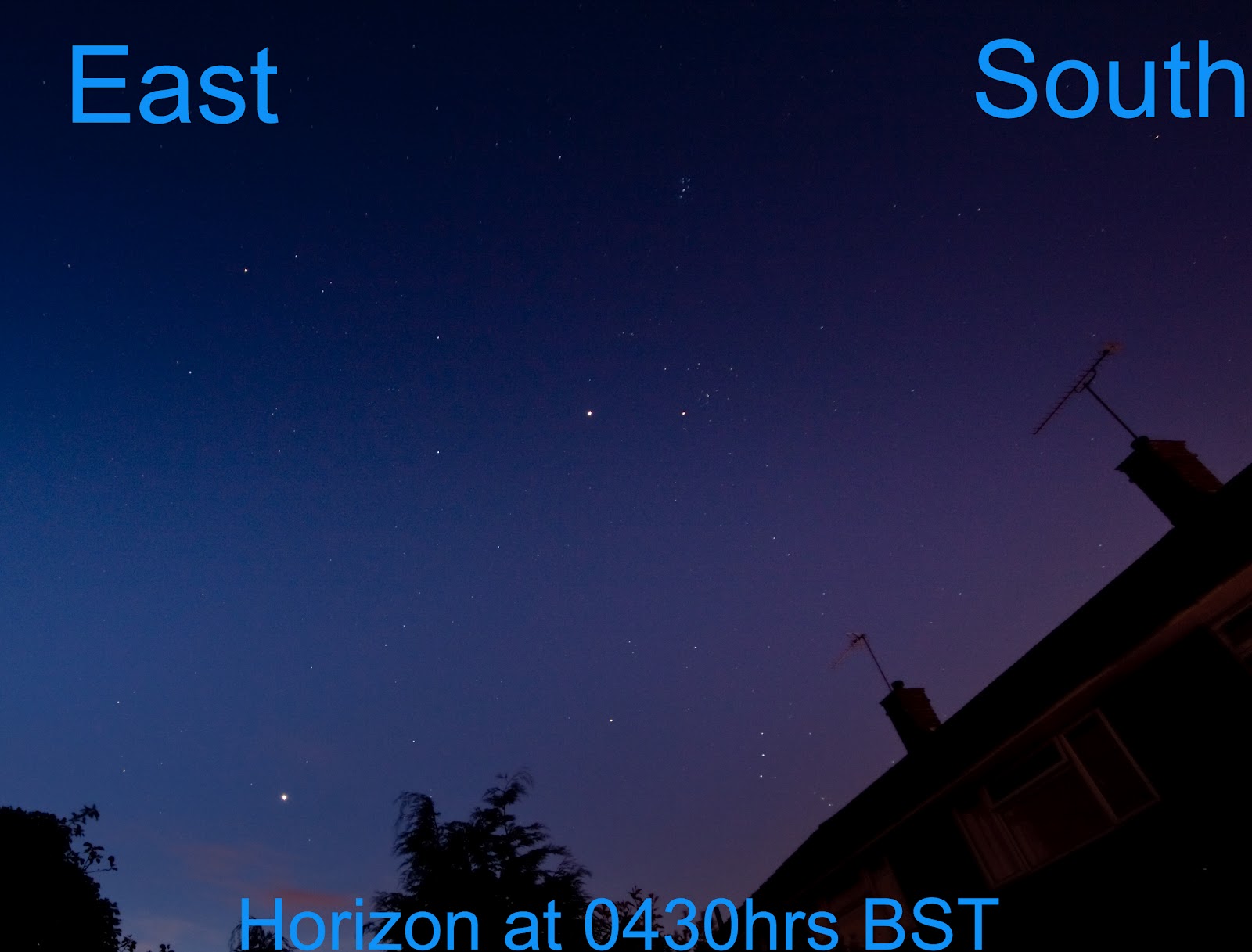 Of course, here in the light-polluted south of the UK, most of the stars fade into a sodium orange glow but I remember seeing incredible sights such as the "Milky Way" in all its glory from the Highlands of Scotland, not to mention the nebulae around Orion's dagger and the Andromeda Galaxy. Similarly on holiday in rural Turkey last summer (where lights where banned at night due to the danger of confusing nesting turtles), the view of the night sky there was spectacular.

But it's still great fun (I think), teaches you a lot about classical mythology and indeed science if you investigate further and also reminds you of just how small you are really  - how unimportant you are - indeed, how irrelevant you are in the grand scheme of things! I can think of many people (both "famous" and not) who could do with remembering that occasionally!

Well... as my mother once said to me when I waxed lyrical about the stars and planets one night when I was a young teenager: "Yes...that's all very well Douglas, but you have to live on the planet we live on" (I think she had had a bad day) - there are other reasons to get excited about the night - especially if you like wildlife.

Many, many animals are nocturnal and the best time to see them is at night or during dawn and dusk. It always was a magical feeling for me, sitting still in a wood before dusk and hearing the wood literally crackle into life as the sun slipped below the horizon. Blackbirds would sing their sun-down song and as soon as that had finished, the owls would start calling up the moon, mice would start to move about, deer, foxes and badgers began to emerge as human noise fell away...

Even in our garden (and yours too if you're lucky enough to have one) there's plenty to see and hear after the sun goes down. 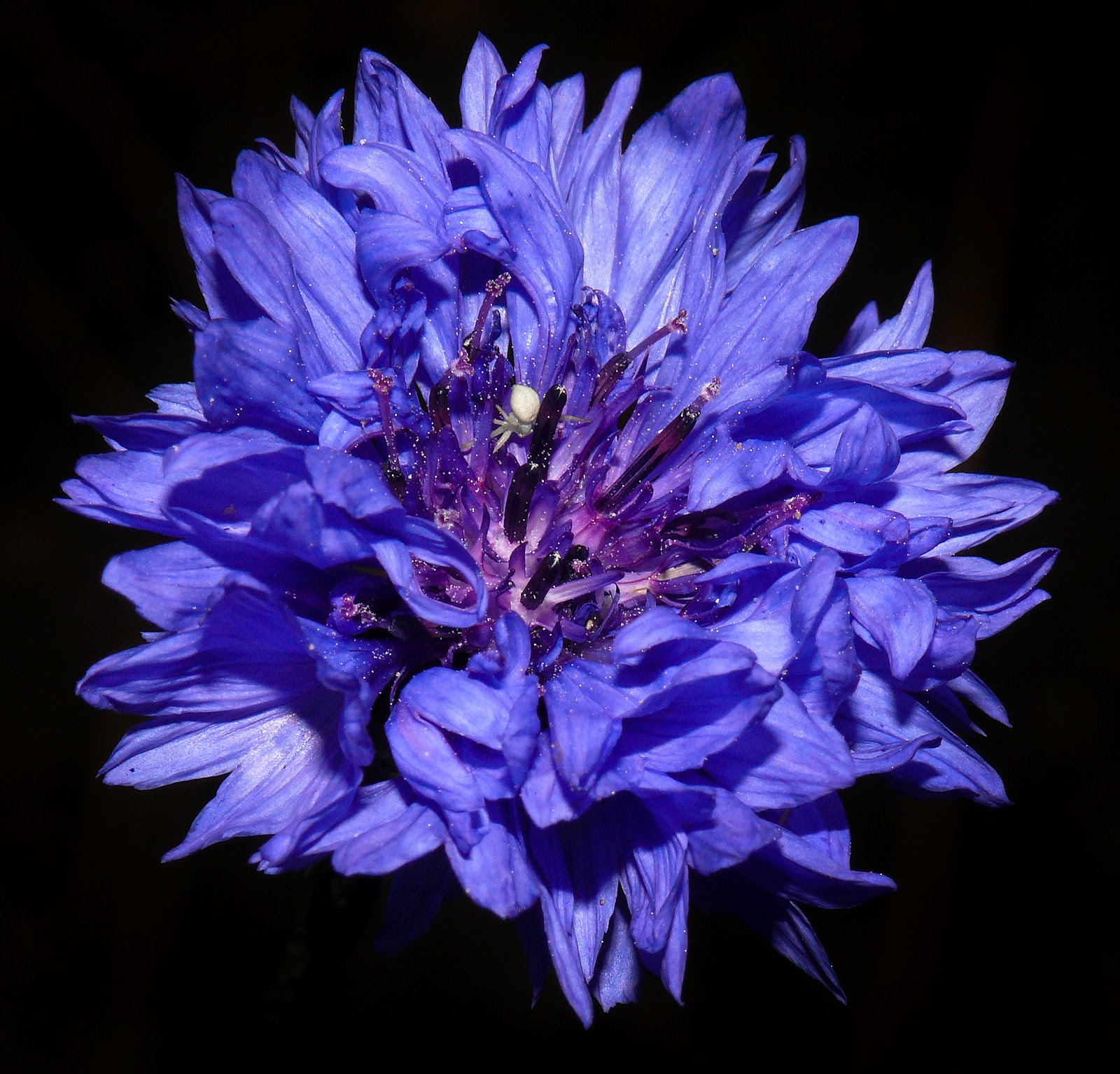 A walk around the borders with a torch will reveal tiny crab spiders (see photo above) huge orange slugs, earwigs and worms (which quickly disappear back underground when the torchlight falls on them). At this time of year you may well see giant house spiders on the outside walls of your house (invariably males on the hunt for willing females), and bats can be seen to start their nightly feast.

If you have a moth trap like me, you'll be amazed at the sheer variety of beautiful insects (especially moths) that can be caught at night- and a quick dip into the world of moths will mean that you will come to quickly realise that these insects with such a drab, boring, brown reputation (when compared to the butterflies for example) do not deserve that reputation. They are FAR more colourful, numerous, interesting and well-named than our rather limited dull (in the main) butterflies.  You may be lucky enough to live near a glow-worm site and their neon green abdomens always blow my mind!

Then, of course, there are the strange sounds of the night. The terrifying (before you realise what they actually are!) roars of the muntjac down here or fallow/roe deer. The even-more terrifying screams of the mating winter vixens. The strange cries overhead of passing birds - birds which you've never seen before (or so you think - invariably these are water birds such as moorhens and grebes which tend only to fly distances at night), the thin "tseeps" of night-migrating redwing in the autumn and early spring and then of course the hisses, hoots and screams of all our owls.

NB - if you live in a more suburban area, these sounds might be joined by the distant wail of police sirens or worse still the noisy throb of "copper choppers" but heyyy... we can't have everything our own way sometimes eh?! (The police were actually sent to investigate me once - as a report of a large, strange man wandering around a graveyard got to them once, years ago. Needless to say I was watching weasels and glow-worms and not grave-robbing or whatever they had in mind to charge me with! I won't even go into details of the night when they stopped me with a sack over my shoulder at night and demanded to know what was in the sack. (It was a couple of dead badgers that had been run-over, that I was collecting for the MAFF!))

I love the sun, but I love the night also and thoroughly enjoy being out in it - it's a secret world which we can gain privileged access to if we want - all we need to do is look and listen!

Here's the image of the night sky again (this time with the main stars and planets visible in the shot) names.

Again, if you have trouble viewing this (it's too small) click HERE and then once more, click again on the image itself to see it full size. 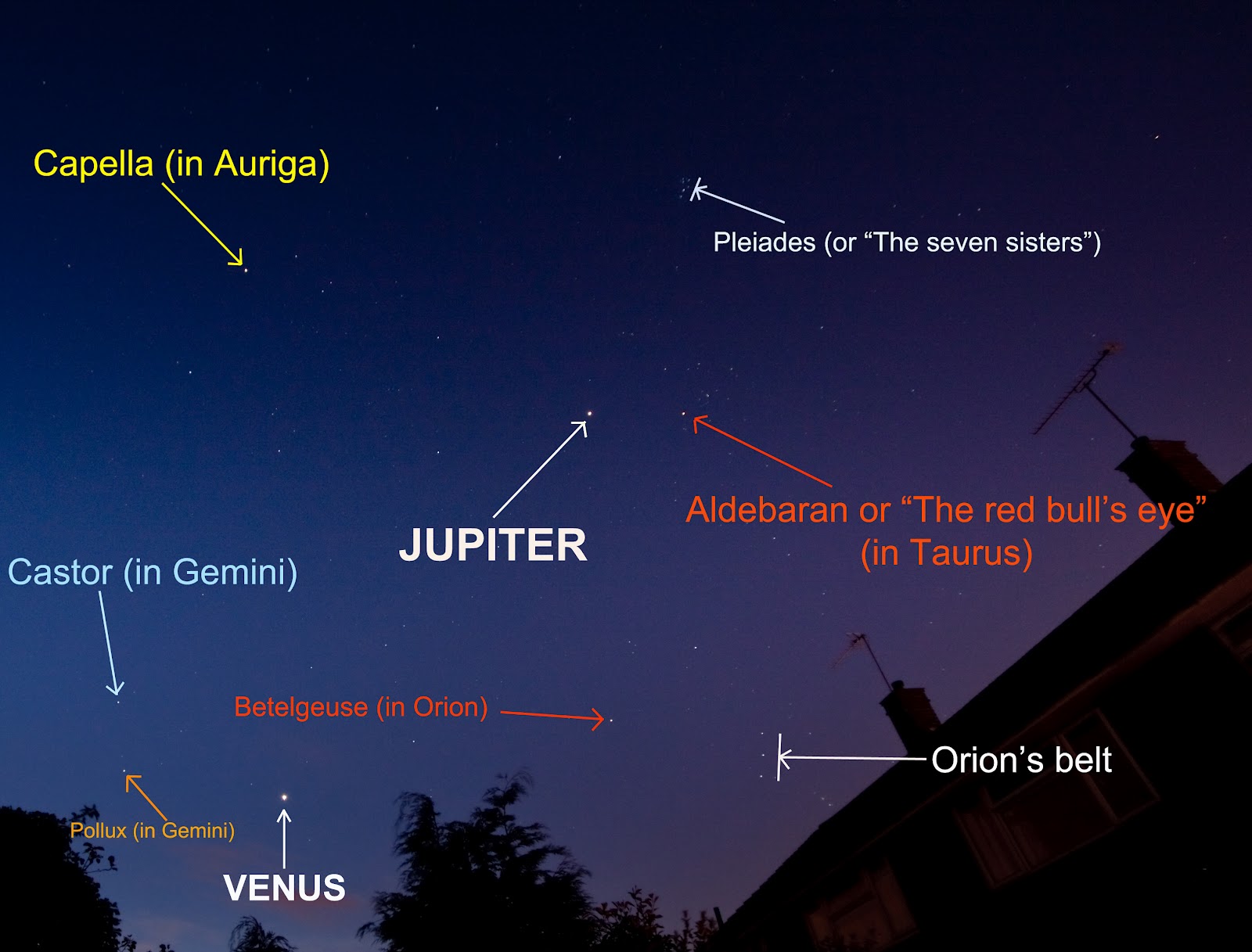 I'll not go into the names of the stars on this post (Capella was a she goat fed to the baby Zeus for example) - a google search on the names will provide you all the (really interesting) information you could possibly want on these names and classical mythology.

All I will say is that if you would like to explore the night sky further and you have an i-phone or (like me) an android phone, then I can't recommend enough the "star-gazer" app for these devices. I taught myself basic astronomy (or at least a basic understanding of what I could see in the night sky) with a text book and paper star maps - no such need these days with a GPS-enabled phone  -  now how wonderful is that!