At present, I am using a "turbo trainer" to get 1000 calories burned off quick as you like in the back garden. Easier than I make it sound, mind.

I've screwed my old racer bike to it and to be honest, even though it's quite hard work - it's also quite fun, in an "I like to birch myself" kind of way.

I bought it (the elite fluid turbo trainer) from ebay for a couple of dozen quid, as a cheap replacement to my all-singing-and-dancing static bike that broke under my immense mass* about two weeks ago.

* (Actually I've been on a real health kick since January 9th this year and have lost... wait for it..... well over FOUR STONE since that day in January where I read a blog post from an old pal and thought on that very day... you know what... I need to do that too!).

I was in the garden t'other day, under our largest poplar at the far end of the garden, well away from the house and on my turbo trainer, when I noticed a mouse-sized moth fluttering under one of our mock orange shrubs. I immediately recognised it as a poplar hawkmoth and thought I'd dismount from my bike and have a look at it. (You don't get this sort of distraction in gyms do you?!)

A closer inspection revealed this moth to yes, be a poplar hawkmoth, but a buff (or pink) form - so almost certainly a female - and freshly emerged from her subterranean pupa, where she had been for the previous nine or ten (more like it) months.

Most poplar hawkmoths are grey in colour, certainly the males anyway and most females, but quite a few females are much more colourful - buff or even pink in colour - and this was indeed the colour and form of our freshly-emerged female poplar hawkmoth.

She was floundering a wee bit though (poplar hawkmoths can't fly for the first day and night of their adult (winged form) lives), so I helped her onto a trunk of a tree where she could hide, sit still and pump out her pheromones  overnight. Ben, my eldest, was transfixed at the sight of such a large moth and proceeded to take photos with his new wee pocket camera.

She seemed to climb about ten feet and then settled down amongst the ivy. So I got back on the bike to finish my 25 miler (that's the length of my sessions these days) and Ben went back inside. 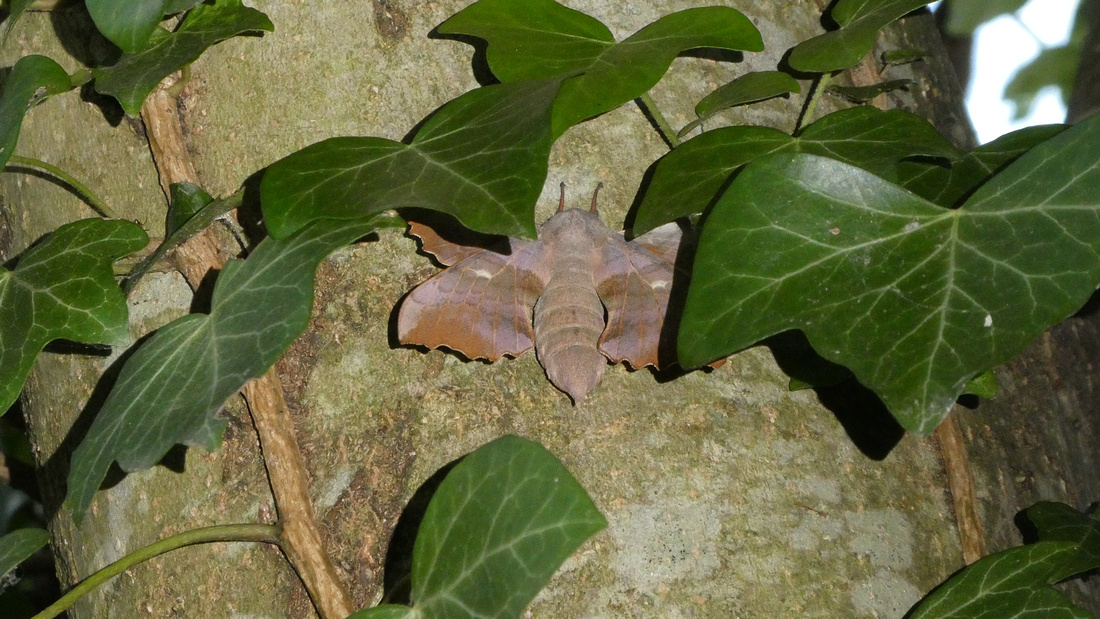 I didn't think much of her that evening or that night - but I did wander back up to the tree the following morning, to see if she was still OK (she wouldn't yet be capable of flying).

And look what I saw! 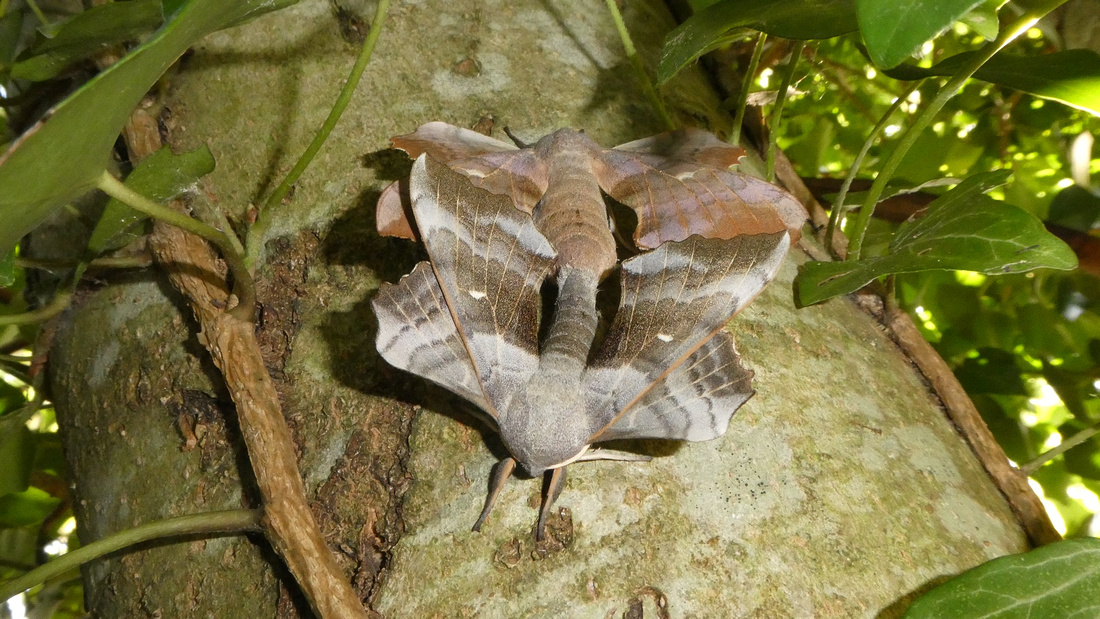 Ben was beside himself with excitement - as I suppose, in a mothy-way, was the male moth that she had enticed down to her, overnight.

Her pheromones had done the trick alright - and sucked in, like a tractor beam, a passing male, who fancied a bit of female moff, in the buff, quite literally.

There they stayed for a full 24 hours, locked together in a mothy carnal embrace.

And the following night, last night that is, as the flying ant swarms settled and were replaced in our garden at least, by two HUGE male stag beetles, these two moths, flew away.

I hope that the female is now laying dozens of eggs on the undersides of our millions of poplar leaves in the garden - I may not find them... but I bet I see a caterpillar or two or if not a caterpillar... an adult, maybe next year.

The scientific name for the Poplar hawkmoth is Laothoe populi.

Laothoe was one of the concubines of the famous King Priam (king of Troy during the Trojan war) and the name Laothoe literally meant (at the time):  "nimble people".

Poplar hawkmoths are interesting for a number of reasons, not least of all in that they lack a "frenulum" matron, (a series of bristles or hook-like structures on the wings of most moths, which keep hind and forewings locked together at rest and synchronise wing movement when flying). This means when the poplar hawkmoth is at rest, it can hold its hind wings much further forward than most moths can - which provides a unique look to a resting poplar hawkmoth - all four wings are spread like a bunch of four small leaves.

But you knew all that already, I know.