Shouting at shrews.... (and spiders).

I'm writing this post after finding this (below) on my government-sanctioned daily walk today. 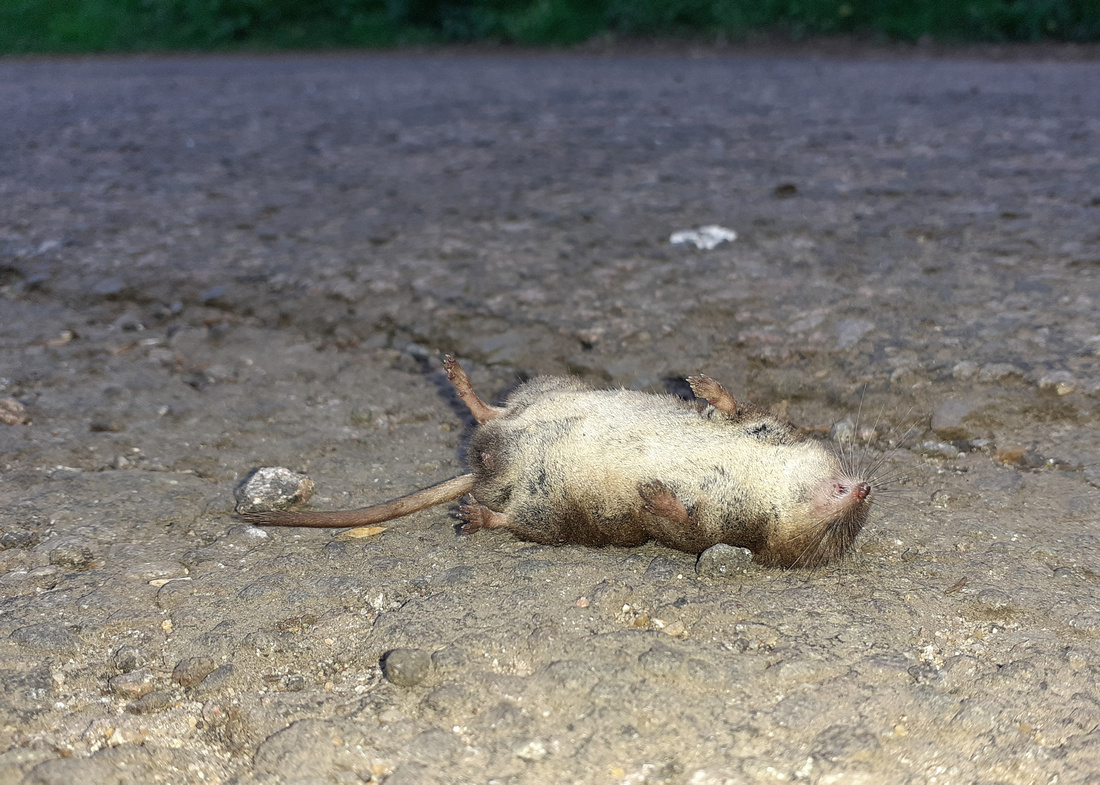 Many, many moons ago, I used to be a paperboy (do paperboys even exist any more?) and as such I was often cycling around the roads of High Wycombe around dawn, delivering newspapers. From about 1982-1986, if you really want to know.

And... being hyper-aware, I was often noticing and cycling around dead shrews on pavements.

(Shrews aren't rodents by the way - in case you didn't know).

I was led to believe back then that it was always shrews (rather than mice or rats for example)  that you'd see lying dead on pavements as shrews liked their environment to be very, very quiet indeed... and if they just had to cross a road to get from one hedge to another, or from one patch of woodland to another - and a loud motor vehicle roared down that road as they *ahem* waited to cross the road on the pavement, they'd simply drop dead of a heart attack. The noise would be too much for them. It would SHOCK them to death.

Explained why these dead (pavement) shrews seemed otherwise uninjured, you see. No missing limbs or head. No chewed body. No blood or entrails visible. Just a perfect-looking shrew, on its back, with its feet in the air. A heart attack then. OBVIOUSLY.

Fast forward a few years to the late 1980s and I was to be found carrying out my own shrew survey in a wood near Hughenden, High Wycombe.

OK then. Millfield wood, if you really want to know.

My shrew survey consisted of me taking my mother's nail scissors (nope - she didn't ever find out) up to the wood where I would use them to trim the fur of shrews I'd caught in the leaf litter of the wood. I'd trim the fur in different spots for each shrew I caught and therefore know if I caught them again, not to count them again in my population data.

I got quite good at catching shrews during that.... what...? Month. In the summer of 1987. Although to be honest, it isn't that hard, if you have hearing like me. Shrews are noisy little buggers at the best of times. And as long as you didn't SHOUT at them (see above) then it was a relatively straightforward operation.

Find a suitable patch of leaf litter. Stay still. Wait for a shrew to come wandering along under the litter - you'd see the litter move and hear their constant chittering. Then jump on them like a big bald fox, making a circle (with you arms) around the leaf litter spot you last saw move. Then start digging.

I must have caught... ooooh….  thirty... shrews in that month. And given them all little haircuts. The poor sods.

The hard part was explaining to the dog walkers who'd wander by on the paths, just what on earth I was doing - leaping into piles of leaf litter with a pair of nail scissors held between my teeth - in a wood in the middle of nowhere - as a SIXTEEN YEAR OLD!

Although to be honest, I probably had something of a local reputation by then. I spent almost all my free time in the countryside behind our house. I basically lived up there all summer. In a pair of shorts and boots and a bottle or two of water (with a packet of cigarettes too, in my twenties). I clearly remember crouching shirtless, smoking on a country path in the summer once (probably around 1992), deeply tanned after spending the previous three months up there, breaking the neck of a big carrion crow that I'd found with shotgun damage to both of its wings. Which would have been fine - if I'd done it BEFORE the very middle class family (mummy and daddy and two be-alice-banded girls, came round the corner with their pic-a-nic basket and saw me. This hulk of a man, half naked, crouched over a crow, snapping its neck and then letting it go to flap around for a bit as all the nervous impulses went berserk for a while, post-mortem. I don't think I've ever seen anyone's eyes open as wide as that family's - they LITERALLY ran away from me before I could explain!

Yes... I've had a little experience with shrews. Although I've now, somewhat reluctantly come to the conclusion that it probably isn't traffic noise that makes these pavement shrews keel over in shock and have a fatal heart attack.

It's unfortunately more to do with the fact that shrews, a bit like their moley cousins, taste bleeding awful. They're killed by a fox or a cat and dropped shortly afterwards, as their foul taste starts to become apparent to the animal that's killed them. It just so happens that you find them on pavements -as that's where YOU tend to walk, isn't it? They are actually dropped all over the gaff - the world is literally FILLED with dead shrews, dropped in disgust by the foxes and cats that thought that long-nosed mouse would fill the gap nicely between meals, only to discover that it tasted so BAD! But you won't come across those shrews dropped off woodland paths or in long grass. You wouldn't ever see them, would you? But you certainly WOULD see the dead animals on roadsides and pavements. And you might well notice that the little dead mammals on pavements are almost always shrews. Not mice. Shrews.

So, boring though it is... shrews can be found on pavements NOT because the sound of a motor car makes their wee hearts stop but instead... because that's the place you're most likely to walk by and see them, having been dropped by a fox or a cat that suddenly thought that thing in their mouth is starting to taste a bit rank.

The next time you see or hear a live shrew, "oochering" around in the leaf litter in front of you (you may need me there to point this out to you?) suddenly stop and shout at it if you like.

Shout anything you want at it.

Its wee heart can take it.

Finally - a tip for the arachnophobes amongst you.

Shouting at shrews will have very little effect. Probably.

But shouting at spiders will have a very handy effect.

Spied an incy-wincy (or less incy-wincy to be honest, and more GURT BIG RACING) spider on the wall of your bedroom, or perhaps on the carpet - and want to get rid of it oot the window, but every time you get near it, it races under the sofa or behind the wardrobe?

Then SHOUT AT IT.

SHOUT something LOUD and ABRUPT.

(You can even add a German accent if you like and  "VER ARE YOUR PAPERS?!" As long as it's loud and staccato).

Spiders instantly freeze when shouted at.

(I don't mean their haemocoel (that's spiders' blood by the way - you're learning more and more on this website aren't you?)  immediately solidifies into ice.... no I mean they instinctively freeze... they stop stock still).

It's all to do with their wee hairy legs you see - very sensitive to vibrations they are - for obvious (insecty) reasons.

Want to drop a glass over a spider so you can hoy it out of a window? 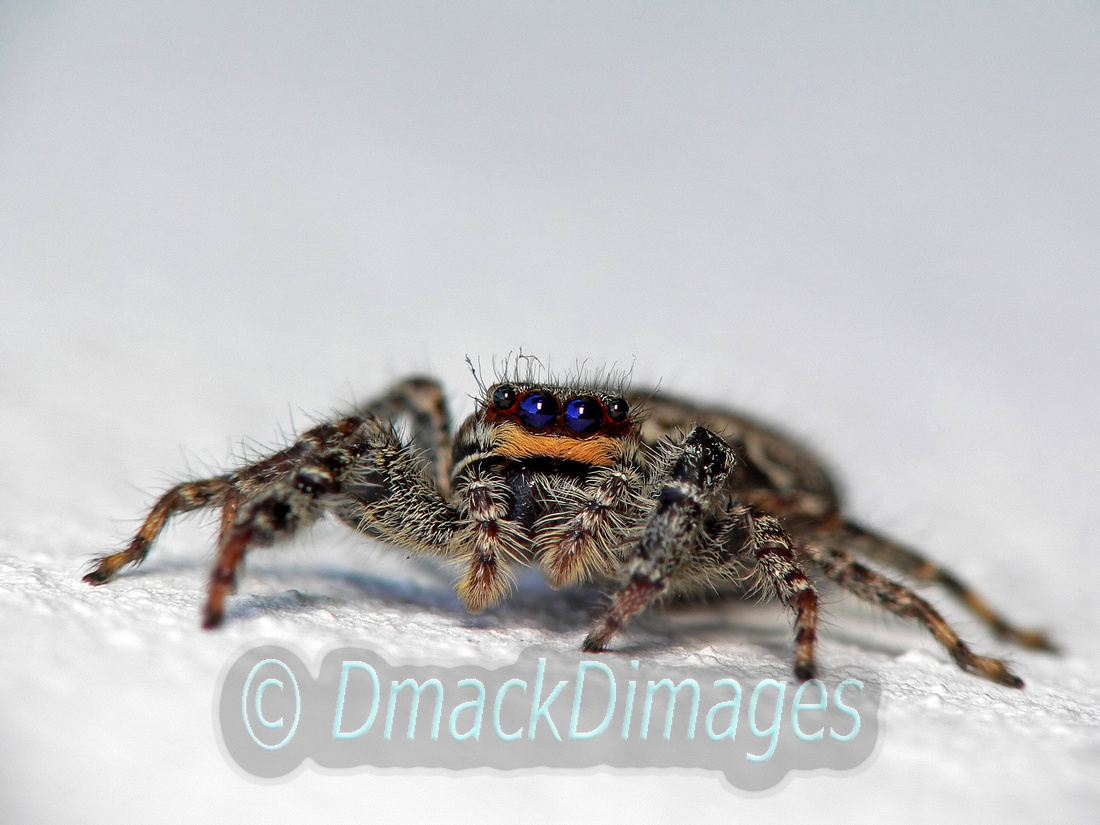