You may have recently noticed that  Sam Rowley's "Station Squabble" below won the "Peoples' vote" in this year's Wildlife Photographer of the year competition. Not the overall prize, the peoples' vote (perhaps even more important then!). 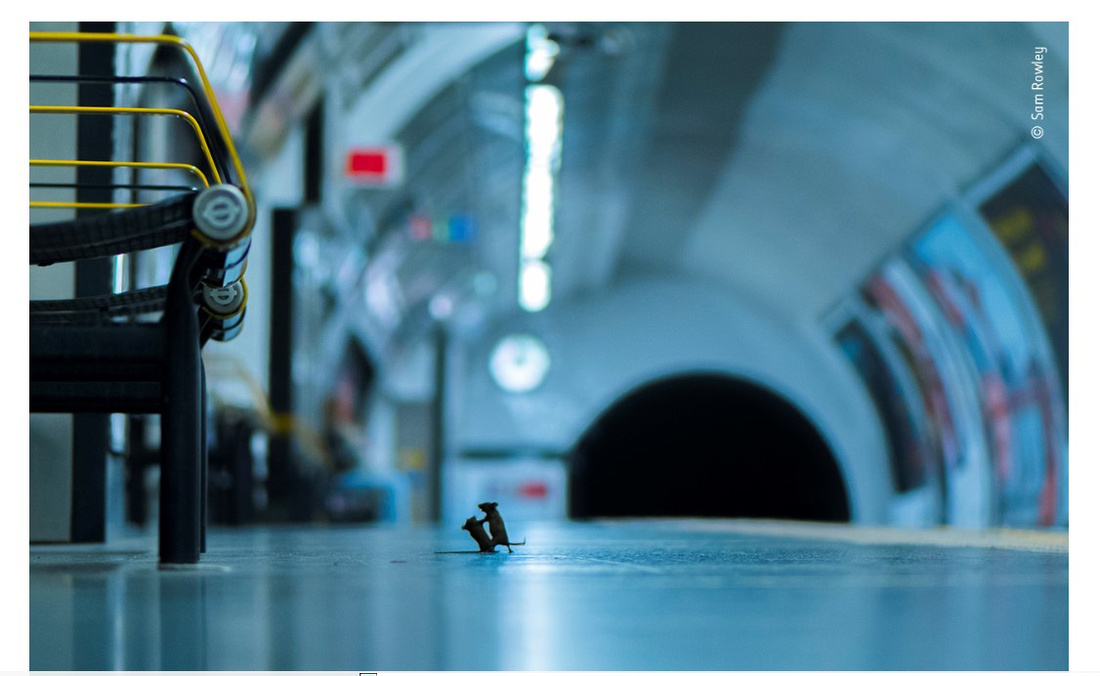 And you might have noticed that yet again, *yawwwwn*, the keyboard warriors have started pouring scorn on this wonderful photo above.

Oh well... you're gonnae get them anyway (as you must be here for a reason?)

I think it's a superb image.

For many reasons - not least of all it's an image that we can all relate to. (Well... we Brits anyway).

I also love it because unlike many other award-winning wildlife photographs, the subject of this particular award-winning photograph, (i.e. the wildlife, in this case the two mice) only fills a tiny, tiny proportion of the whole frame. At a guess... 0.66% (1/150th)? I LOVE that.

I also like it as it really intrigues me.

When I lived and worked in London (ohhhh over a decade now) not that I was taking any photographs at the time (I didn't have a camera) but I was certainly aware that one wasn't allowed to take photos on or in London Underground land.

I guess that's changed now that everyone has a camera on their phone - it would be a bit weird banning photography on the tube now - although I wouldn't be surprised if it still wasn't allowed.

So how did Sam take this shot?

Also did he really lie on his belly on the platform for hours and hours, waiting for the perfect shot?

Well... if he did, he has waaay bigger "cojones" than me - I don't think I'd lie down for more than five seconds on a central London tube platform (as that's where he did shoot this - although he hasn't publicised exactly which station).

But that's my point really.

He may well have laid down on the central London tube station platform for hours and hours - so I can only assume he got permission for this. From TFL (Transport for London). And are we to assume therefore that this shot was taken in the middle of the night, when either no trains were running or very, very few passengers were about?

Finally - on the subject of passengers - WHO IS THAT in the background (the mice are almost pointing to this blurred person, sitting on a bench at the far end of the platform - a person wearing what looks like blue jeans and a green top)?

If it is a passenger waiting for a train - then I'd be amazed if they were OK with the photo being taken of them (they wouldn't know that they were out of focus in the shot).

With a remote shutter switch in his hand -triggered just at the right moment when the two mice wander across his Nikon's field of view 40 yards or so away down the platform?

Well... I don't really suppose it is Sam, the photographer, to be honest (as he'd have said it was if it was him... and of top of that it appears to be a woman doesn't it?) - but my intrigue is still boiling over with this wonderful image.

But purely from a technical and logistical (and legal!) point of view - I'd just LOVE to know how he got this shot.

Oh and by the way... Sam Rowley, just like yours truly, graduated from Bristol University's biology department, although Sam looks like he graduated about twenty years after me!

Hmmm.... I think, as a fellow Bris biology (well... zoology for me... (same department though)) graduate, I might just give him a bell and ask him for his "Station squabble" shot secrets....

Well well well.... looks like Sam DID lie on his belly on a central London tube station for hour upon hour. Whilst the station was open - and full of drunk punters! Big, big cojones indeed! Although when I was his age, (early mid 20s ish) I'd have probably done similar!