The return of a (very) old friend.

We've had a great tit use our tit/sparrow camera box as a winter roost, each winter since 2016/2017.

And at the end of each winter, I naturally assume  (what... I'm a realist not a Disney-ist!) it will sooner-or-later die at some point during the breeding season (or shortly afterwards) and sadly not return the following winter to roost with us again.

Great tits on average will live around three years, after all... even if they can, at best, make ten.

There had been no return yet, this November, so I confidently told the family that our wee friend had probably died (at last) during the year - and wouldn't be back this winter.

Then this (below) happened this afternoon at dusk...

I've got a few cameras now hooked up to a hard drive CCTV DVR system which record movement  -  and as I was watching the news in the sitting room, Ben bounded in and said "THERE'S SOMETHING SLEEPING IN ONE OF THE BOXES!!!"

We ran back into the conservatory (where the TV monitor and CCTV DVR system is) and sure enough - our tit was back!

I should point out I suppose, that I'm pretty confident the great tit that is now spending a 5th winter with us is the same bird that has spent the last 4 winters roosting on the north face wall of of our mountain house, under the eaves.

How can I be sure?

You see (and I know you know this about me) I am pretty "up" on what animals are to be found in and around our garden in any given week. Birds especially.

We've been here for 9 years now and I've NEVER seen great tits around the house, or house box, other than one great tit roost with us over the last 4 winters.

Sure... it could be that it's a different individual of the same species that I've not ever seen near the house or camera bird box, other than during the winter at roost time - but the chances of that being the case are pretty low I'd say.

This is the same bird as the bird that found the box in the late Autumn of 2016 and therefore if it makes it to May 2021, our great tit will be AT LEAST 5 years old.

And that's a grand old age for such a bird. (As I've already stated, great tits live around 3 years on average... but can make it to 10 or so years old - in extreme circumstances).

So.... we're all rather happy here this evening - welcoming our old bird back for the winter.

This year though, he (or she) has brought back to the box, for the first time that I've seen, a considerable cargo of hen fleas  (Ceratophyllus gallinae).

Ben and I watched these hen fleas bounce around the box from our handykam camera screwed into the roof of the box. They didn't stay long off the tit - jumping back into the downy feathers pretty quickly. If you're as eagle-eyed as me (and YouTube) hasn't compressed the video clip above, you may see a flea at the top of the box, very briefly).

Reminds me of when I cleared out the starling nest space in the eaves and got COVERED in fleas for my trouble.

Thought I'd let you know about our returning old friend tonight.

Another 4 or 5 winters with us and it might well be a record-breaking tit. 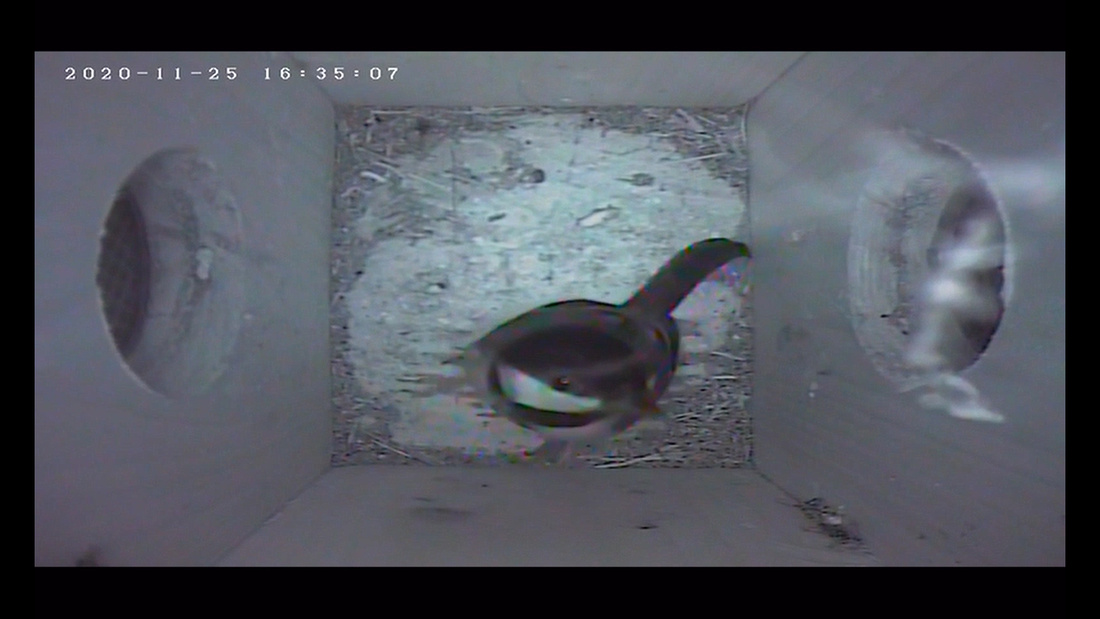