The best camera in the world....

No.. the best camera in the world is the camera that YOU'VE GOT WITH YOU (wherever you are) and which you can use easily and quickly.

And with that in mind...

I know I blogged recently that my next camera would almost certainly be a (three year old technology) compact (tiny really) Panasonic LX15... and that was on my shortlist of three models, one of which I wanted to have as my "go anywhere tool".

Yesterday I bought a second hand compact camera (from a lovely bloke on eBay)… and whilst it IS a Panasonic Lumix, it's NOT an LX15.

And I'm VERY excited about it!

Yesterday I drove through the Badlands of Berkshire (drive around the countryside surrounding Stratfield Saye and you'll see what I mean about "the Badlands") to pick up this TZ90 from Mr.M, who incidentally takes superb wildlife photos with his Fujifilm camera(s) - check them out here!

My shortlist of three compact cameras were always as follows

1 -  Fujifilm X70 (although this is bordering on not being compact with an APSC sized sensor - HUGE for a compact camera).

I also had in mind (for a while) the Canon G5X. Which would have ticked all boxes, fo-sho… but also been a bit too big and clunky, even though I think Canons are built like TANKS... and you know... just work. (Unlike sonys for example).

Bottom line is I need(ed) a small camera which

Don't tell my wife will you, but I actually submitted a bid on eBay for a second hand Fuji X70 whilst my wonderful wife was in the last stages of labour a fortnight ago... but I was outbid a few minutes before my second son was born - you'll be please to know (on both counts).

I then spent ten days or so realising that whilst the Fuji X70 with its HUGE (relatively-speaking for a compact(ish) camera) sensor would have been very nice, I didn't really need a large sensor in any compact camera that I would be taking everywhere with me. The small size, flip screen, video capabilities and viewfinder if I could get it... were FAR more important.

Bearing in mind that I've used three Panasonic Lumix cameras before (the FZ20,30 and 50, in fact I still use the FZ50) I then decided to go for a second hand Panasonic TZ90 - which ticked all my "needs" boxes - and then some to be honest - even if it does have a tiny sensor.

And yesterday, Mr.M was kind enough to sell his to me, for a pretty good price I think. Thanks Mr M!

Photos of my new toy can be seen below - I've placed the TZ90 next to a soft ball which is just slightly smaller than a standard sized cricket ball, so you get the idea of its size. 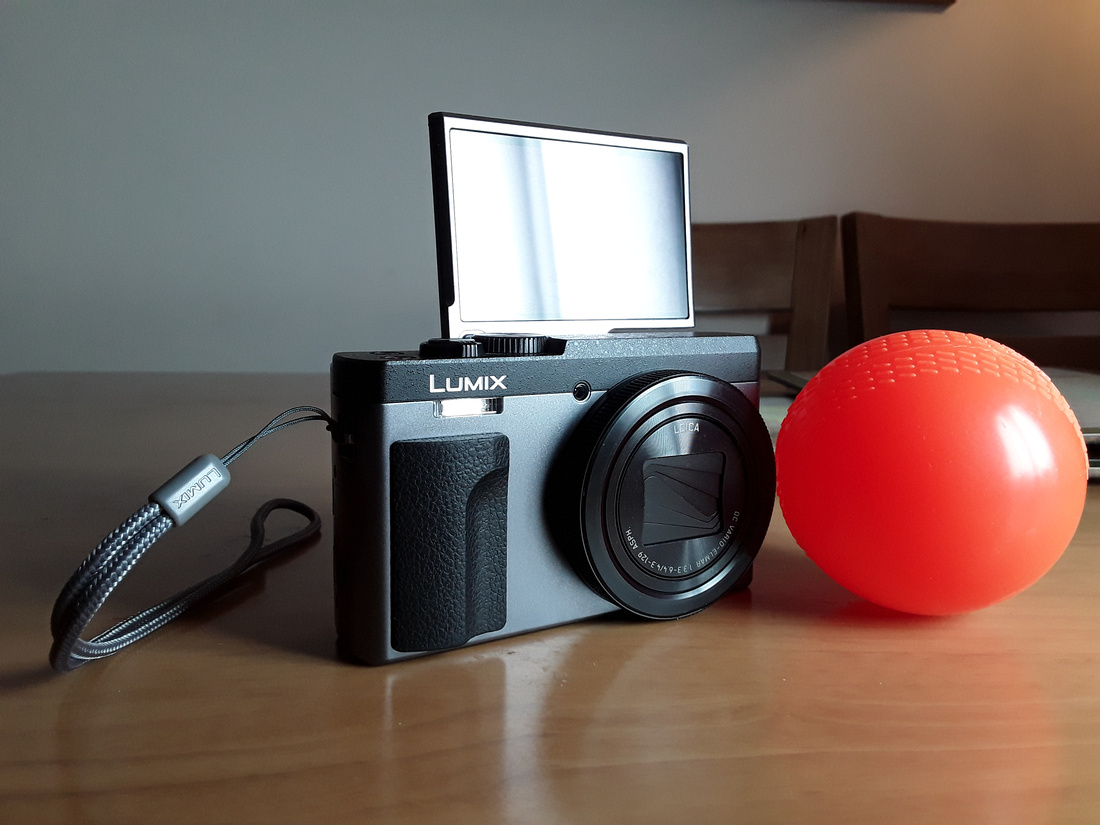 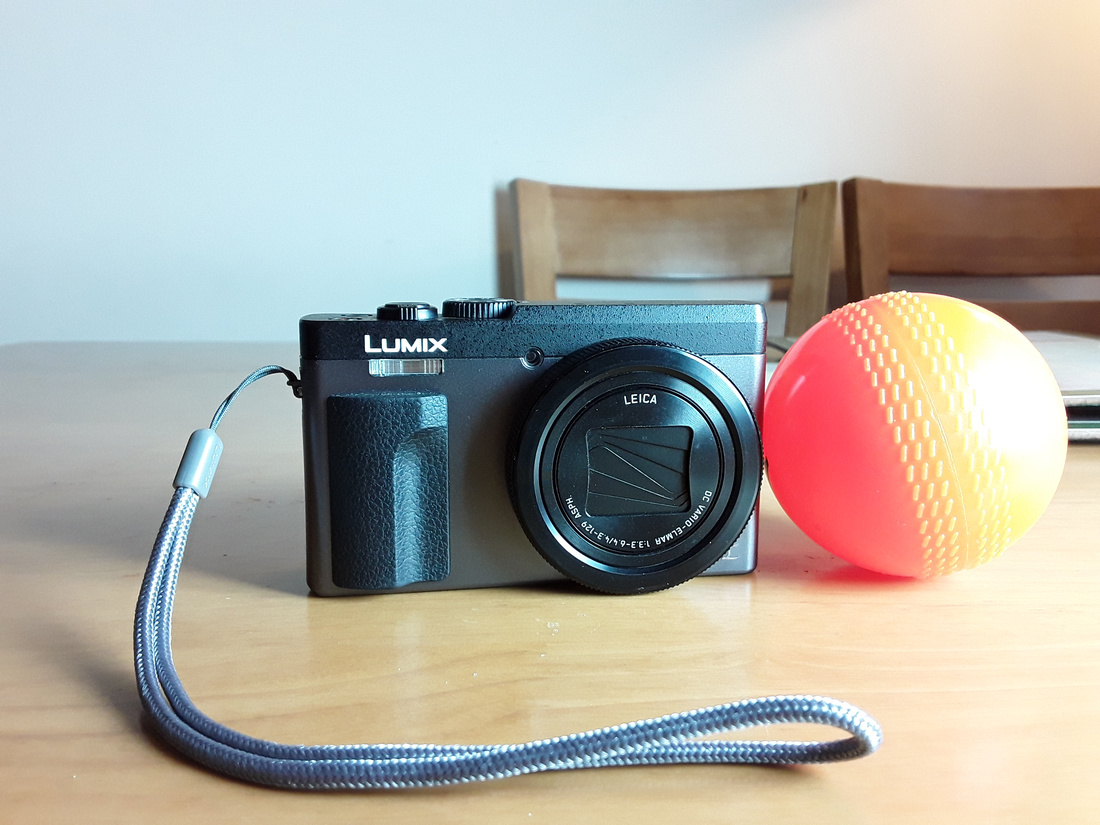 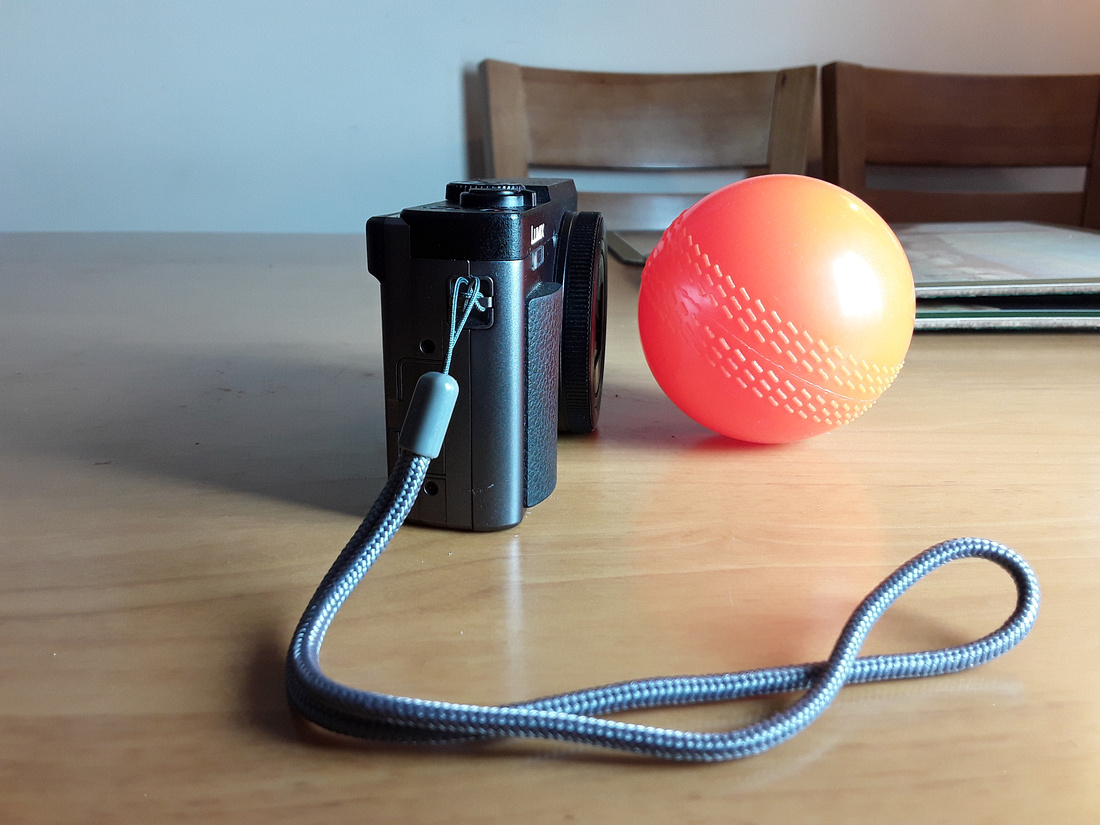 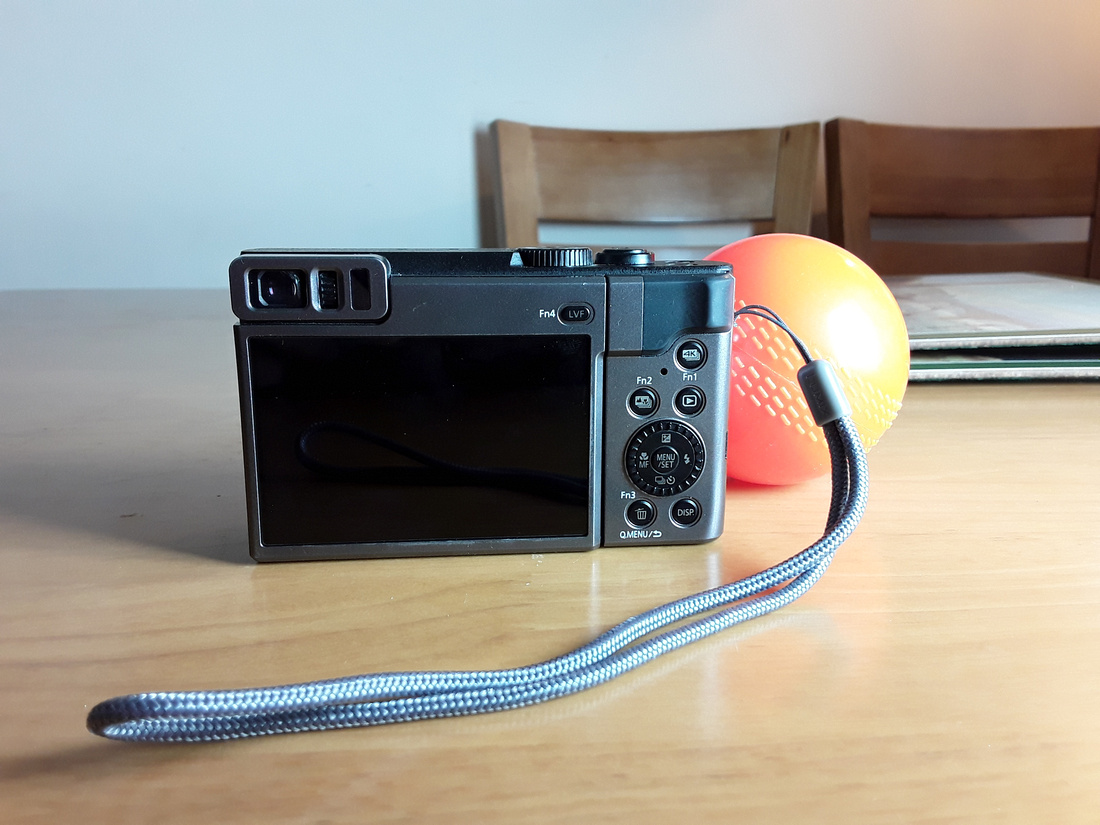 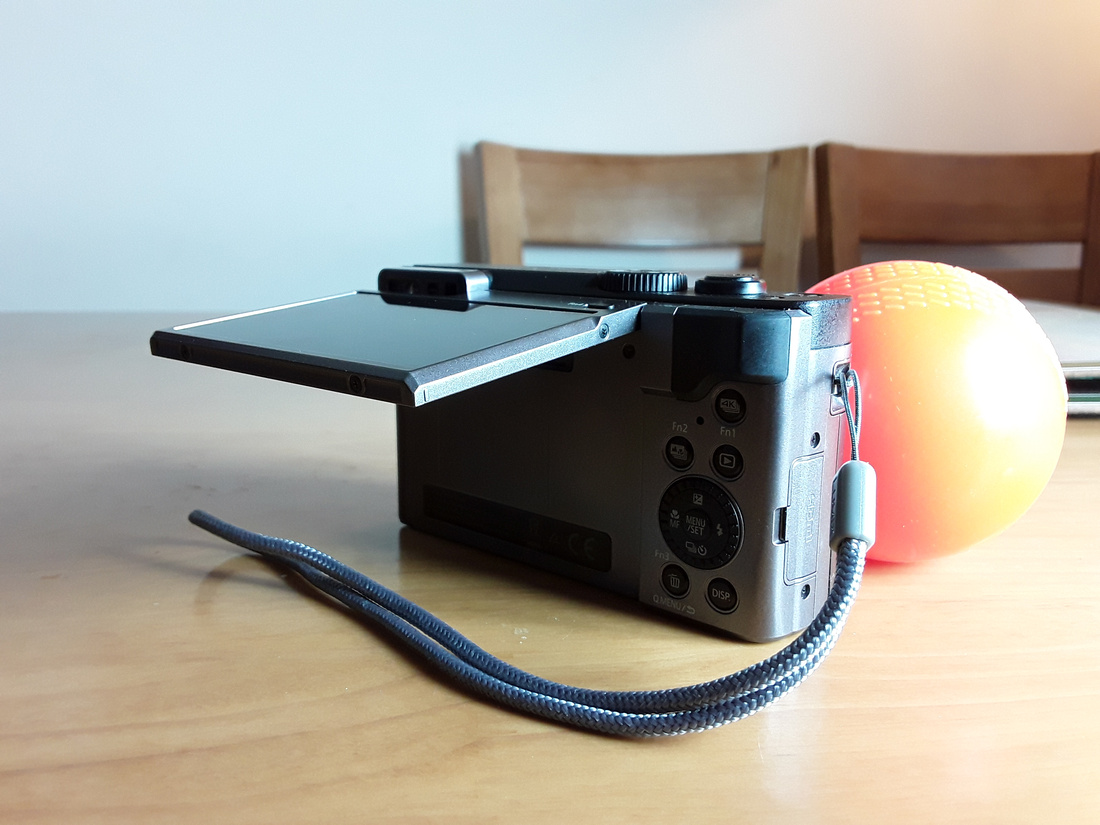 You can read all the tech specs on the TZ90 which I've bought here... but in short, its a very small (TINY) superzoom camera with a small sensor, a superb flippy touch screen LCD and an electronic viewfinder to boot. Plus it shoots pretty good video too.

I ADORE the IQ (image quality) of the full frame 6D and am really starting to appreciate the speed of the 7D mkii.

Yes... if I want a detailed, big shot of something in particular - I'll take those photos with my full frame Canon 6D or bigger APSC Canon 7d mkii sports camera - but other than that - I'll take quite a few photos, day to day, with this wee TZ90.

And believe me... I'll push this TZ90. I used to have something of a reputation amongst photographers as someone who could take certain photos with a camera that was never designed to take such photos!

Like I say, it will be with me everywhere I go - but looking at the 300 page instruction manual - I've got a lot to learn about it!

That's all for now grapple fans.

Stay out of the weather today, eh? 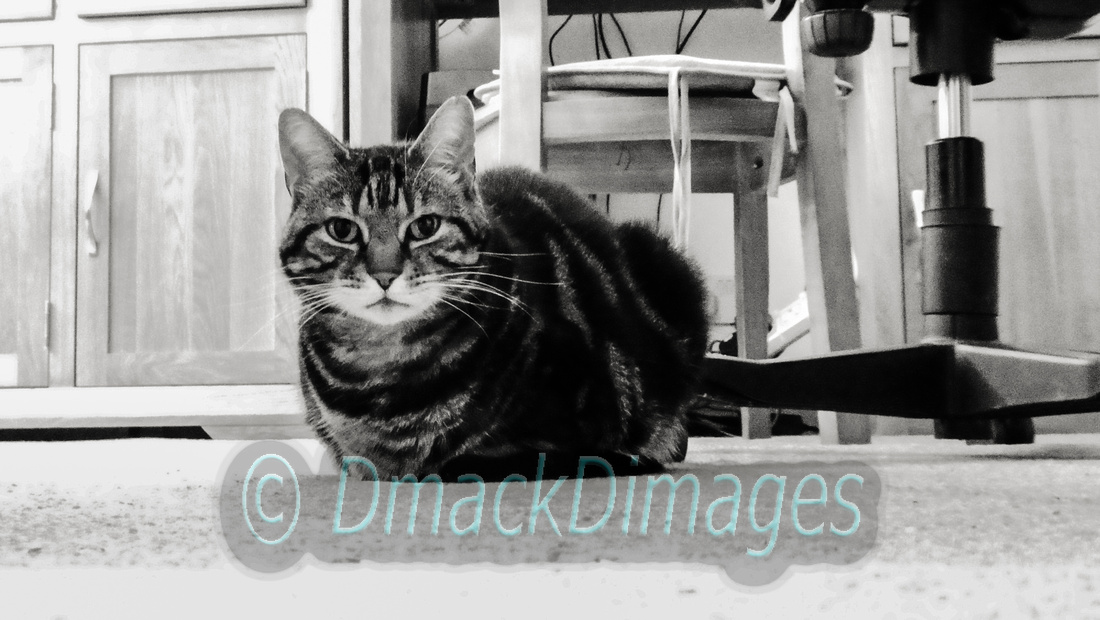