The milky birds are on me!

Regular reader(s?) of this blog may know that I’m blogging about a local half-mile stretch of (single track) country road each month, on which seems to live a dark buzzard. A quite beautiful buzzard as it happens – dark from a distance, but more rich chocolate-coloured a little closer.

Buzzards are pretty variable things (plumage-wise) and this one (I assume it’s just one at present that I’m seeing) does seem a little more chocolatey than other buzzards.

At present then, I’m used to seeing my chocolate buzzard each time I head up to my 800 yards of ‘mac.

Yesterday I photographed it soaring miles-up, in a beautifully-clear blue winter sky. 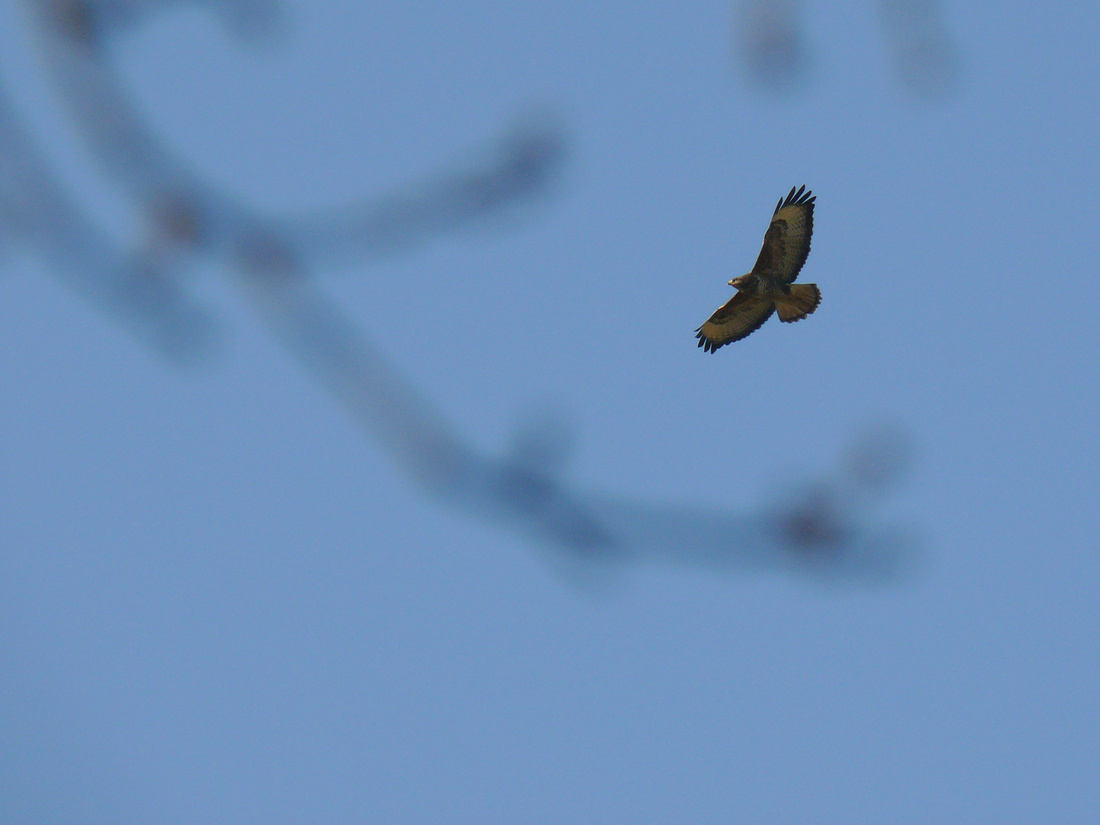 A drive back from my physio today took me along those 800 yards and yes, the chocolate buzzard was there (which was nice), but this blog isn’t an “800 yards of ‘mac” blog post (January’s blog on that subject is already written, is about little owls and is automatically scheduled to appear on this website mid-month).

So if this isn’t an “800 yards of ‘mac” post and isn’t really about that chocolate buzzard… what IS it about?

As I was saying… on my drive back from my physio appointment at Windsor this afternoon, through the rain and leaden skies, I drove along the 800 yards of ‘mac, saw my chocolate buzzard, smiled and drove on.

As I approached the house and in doing so, hit the more built up, suburban area in which we live, I spied a large bird on a low streetlight right by the side of a very busy ‘b’ road (might as well be an 'A' road to be honest) and above a pavement.

It was big enough to be a buzzard but it almost looked like a bald eagle or osprey to me as I drove along the road peering at it through the moving windscreen wipers and rain/muck-spattered windscreen as it appeared to have a snow white head.

As I peered closer and closer, I completely took my eyes off the road and careered off the road, onto a pavement, flattening someone’s bull mastiff which they had on a long lead.

It’s OK though grapple fans, the dog’s owner escaped unscathed and was very nice about the whole incident.

No… of COURSE I didn’t run over anyone’s dog as I peered at the bald eagle/osprey perched a couple of dozen feet over a busy pavement in a suburban area this afternoon. But I did park the car quickly as close as I could and walked up that pavement to try and get a terrible shot or two of this exotic raptor.

The shots are below (I’m sorry about the quality – I didn’t have long, the light was awful and I only had a bridge camera with me) and of COURSE it wasn’t a Bald Eagle (which I've never seen in the wild) or Brahminy Kite  (which I HAVE been lucky enough to see in the wild, on honeymoon in Sri Lanka) – it was just a quite spectacularly-pale buzzard. The palest buzzard I’ve seen I think, perhaps as beautiful as my plain or dark chocolate buzzard a couple of miles away and certainly the most “suburban”.

A nice end to a pretty dark, wet, miserable day and a good start to the weekend I hope.