Sometimes, a little Chrysis is necessary to get the adrenaline flowing. 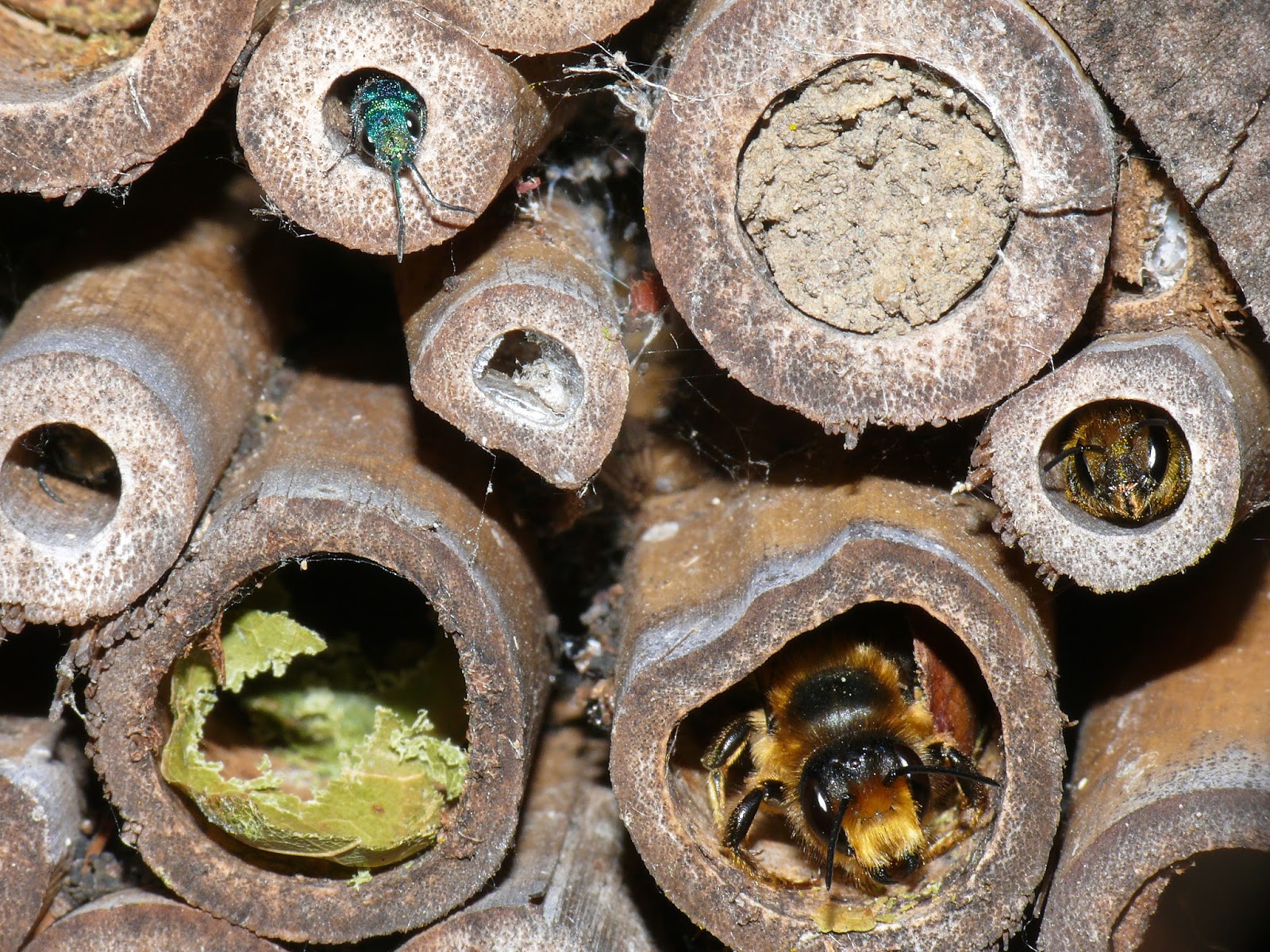 Apologies for being AWOL from this  blog again for some time.

Anyway... I'm back (for now) and wanted to quickly write about our "bee hotels".

As described here (please visit that link for a good summary of our bee hotels with specific regards to our healthy population of leaf-cutter bees), I take great pleasure at this time of year from watching our bee hotels.

In fact I'd suggest to any young budding naturalist that one of the BEST things they can do to watch wildlife at home, in the summer at least, is buy or make and put up a bee hotel. ESPECIALLY in the southeast of England where non-social hymenopteran spp. abound (not so, unfortunately, in Scotland for example).

Yes. I love watching our non-social bees and wasps - the masons, the leafcutters, the miners, diggers and potters - and at this time of year especially, it's all GO at the bee hotels.

The red masons have pretty-well finished their nest building and bricked up their eggs and pollen with mud.

The blue masons (my favourites) are still fully at it though.

The leaf-cutter bees are just beginning to emerge from their nests, having spent almost an entire year in their chambers, as eggs, then developing young. Of course, that is UNLESS the red mason bees haven't destroyed old (but OCCUPIED!) leaf-cutter bees' nests in May in their haste to get their eggs deposited in a suitable hole BEFORE the leaf-cutters emerge (I witnessed that behaviour myself this year).

And then, if you're lucky, your bee hotel will undergo something of a little crisis. Or "Chrysis" to be exact.

My heart leaps a little when I have my first Chrysis of the year.

Chrysis is the generic name of the ruby-tailed (or jewel) wasps and is derived from the Greek chrysis, "gold vessel, gold-embroidered dress", and pays tribute to the brilliant metallic appearance of wasps in the genus.

Beautiful wee things, with an iridescent, pitted, metallic green and blue thorax and a metallic ruby and gold coloured abdomen - the Chrysis spp. are my favourite spp. of wasps for sure. Well... other than hornets I suppose.

Ruby-tailed wasps are also known as "Cuckoo wasps". This is because they don't go to the trouble of collecting food for their developing young like other non-social hymenoterans. They find a suitable 'host' - almost always a mason bee (almost invariably red mason bees) and lie in wait near the mason bee's nest, watching her build it. They'll regularly dart into the nest when the female bee leaves to collect more pollen for her young to feed on when they hatch, to ensure each of the bee's nest chambers is fully stocked with pollen (so WILL have a singular bee egg laid in it soon), then simply lay their egg by the pollen heap.

The female red mason bee will return to lay her egg(s) and brick up the entrance to her nest chambers - but what she won't realise is that there's ANOTHER egg next to hers. A wasp's egg. Which WILL hatch into a developing wasp pupa, which WILL EAT the developing bee pupa. ALIVE.

They're not the "nicest" beasties in the world are they? At least in terms of behaviour. But they are one of the nicest to gawp at I think.

Yesterday I spent a good couple of hours watching the to-ing and fro-ing of our masons and their Chrysis nemeses. I was also treated to the sight of the first leaf-cutters emerge from their hidey-holes. Those were the lucky ones though - other developing leaf-cutters had already fallen victim to being kicked out by the red mason bees or had the protective (but decaying) leaf doors of their nest chambers eaten by earwigs.

When you're watching an established bee hotel, you get the chance to see sex, death, territorial fights, predation, hiding, chasing, incredible construction feats and of course the "circle of life" come full circle when your young bees or wasps emerge in the spring or summer.

Better than any TV?
​I'd say so, in a heartbeat.

Quite a quick heartbeat too..... when the Chrysis arrives!

Some photos of one of our bee hotels can be found below. They're not titled, but you'll be able to recognise the blue mason bee I'm sure, leaf-cutters, ruby-tailed wasps and a digger wasp. 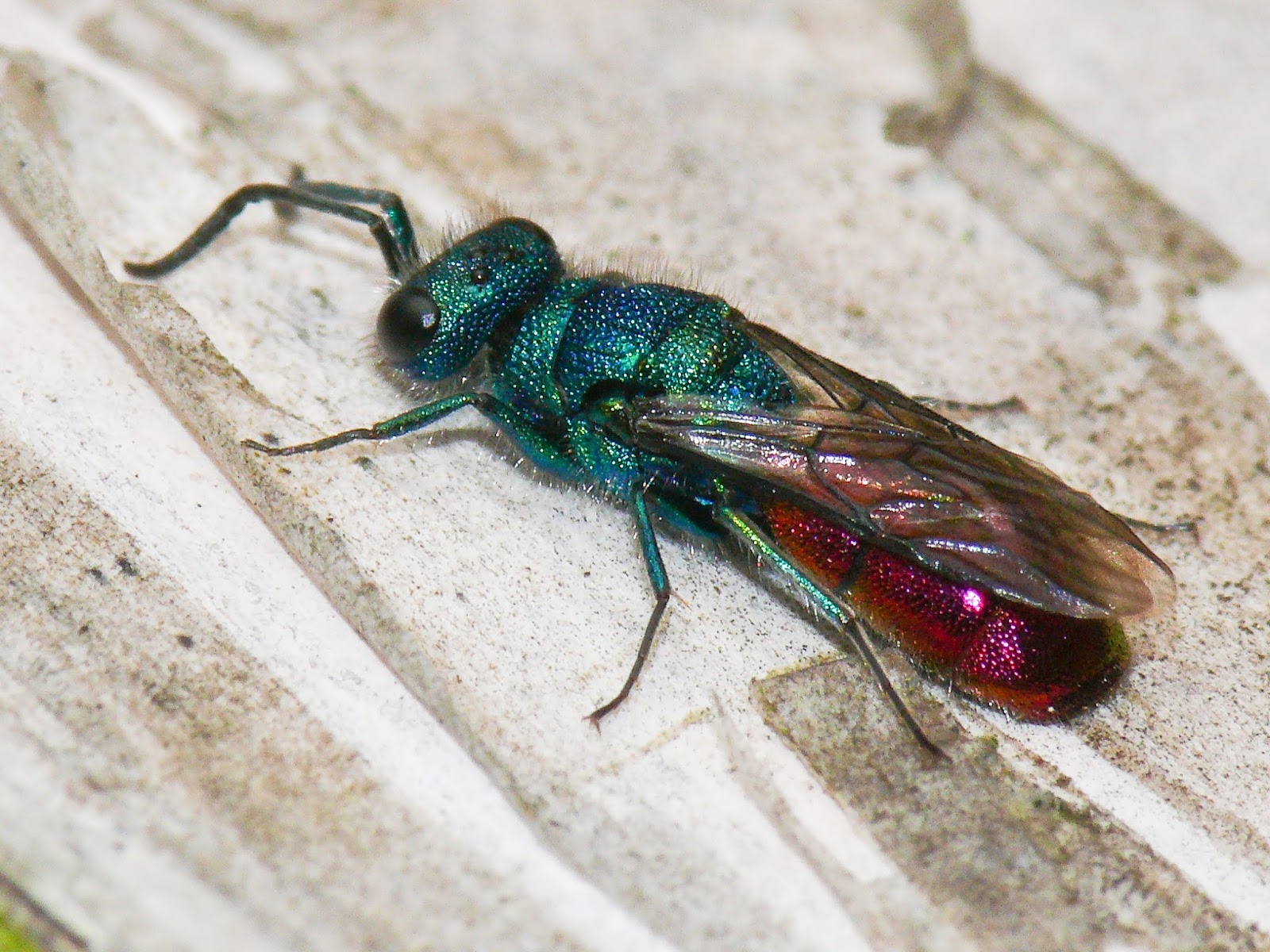 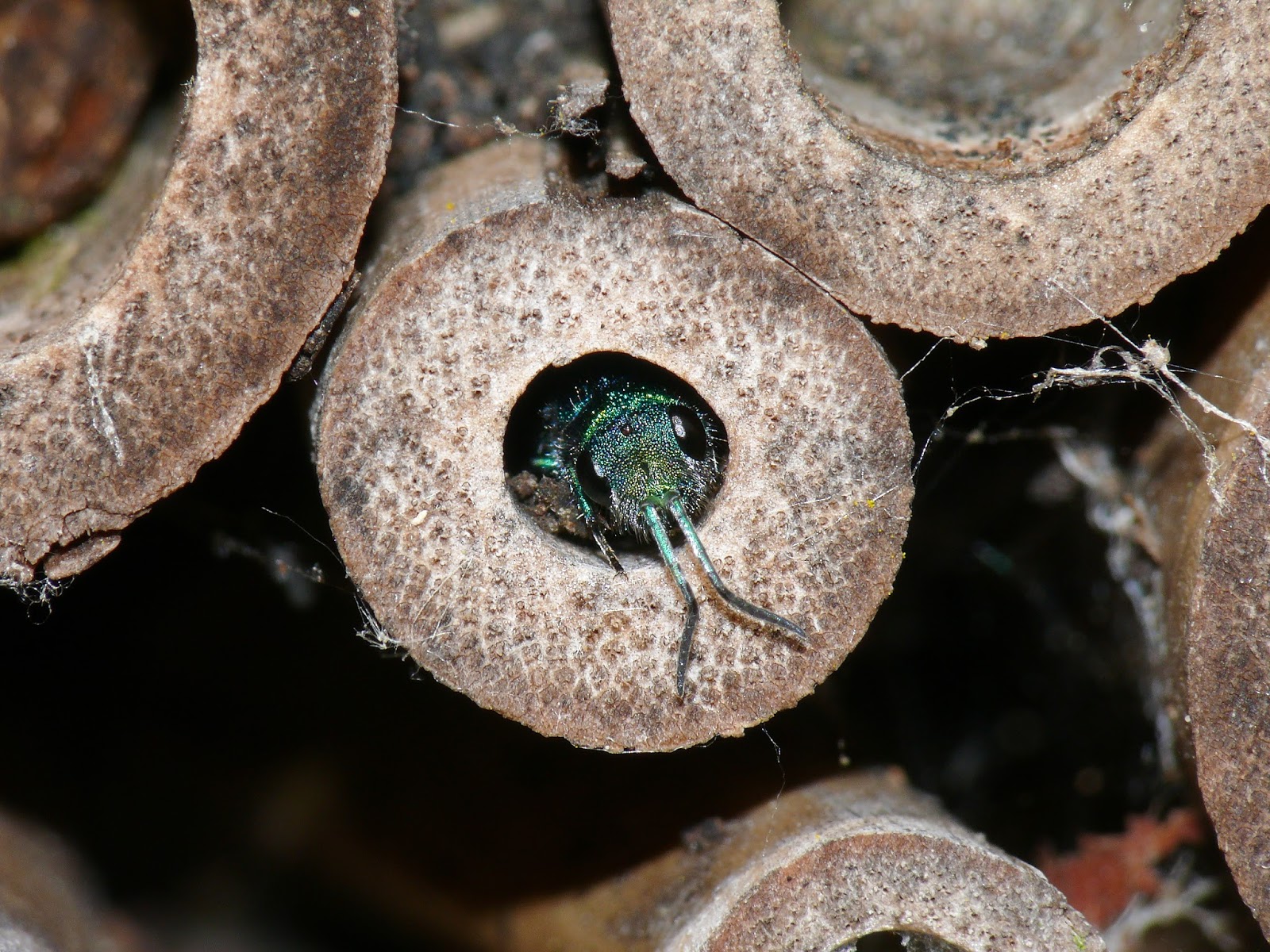 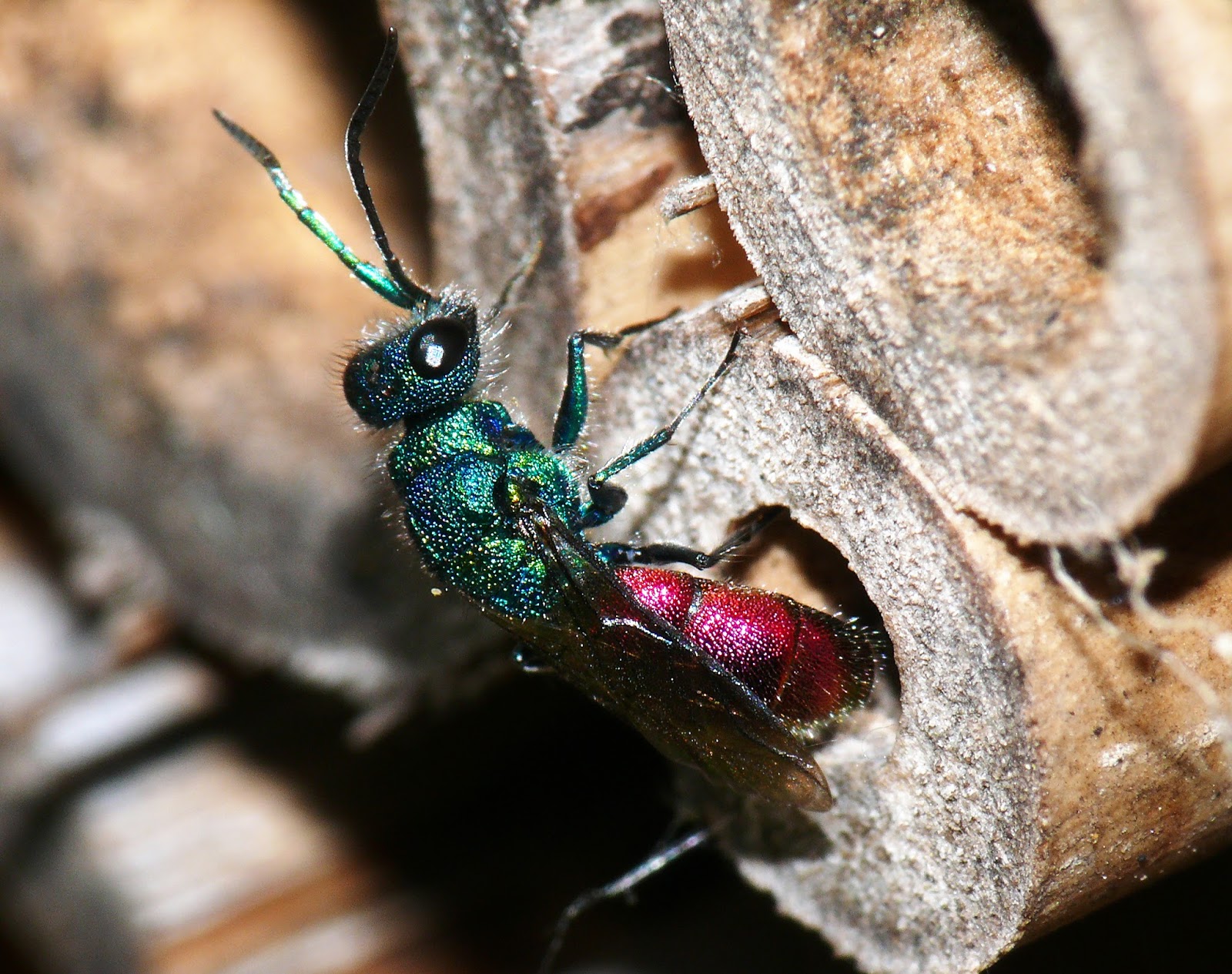 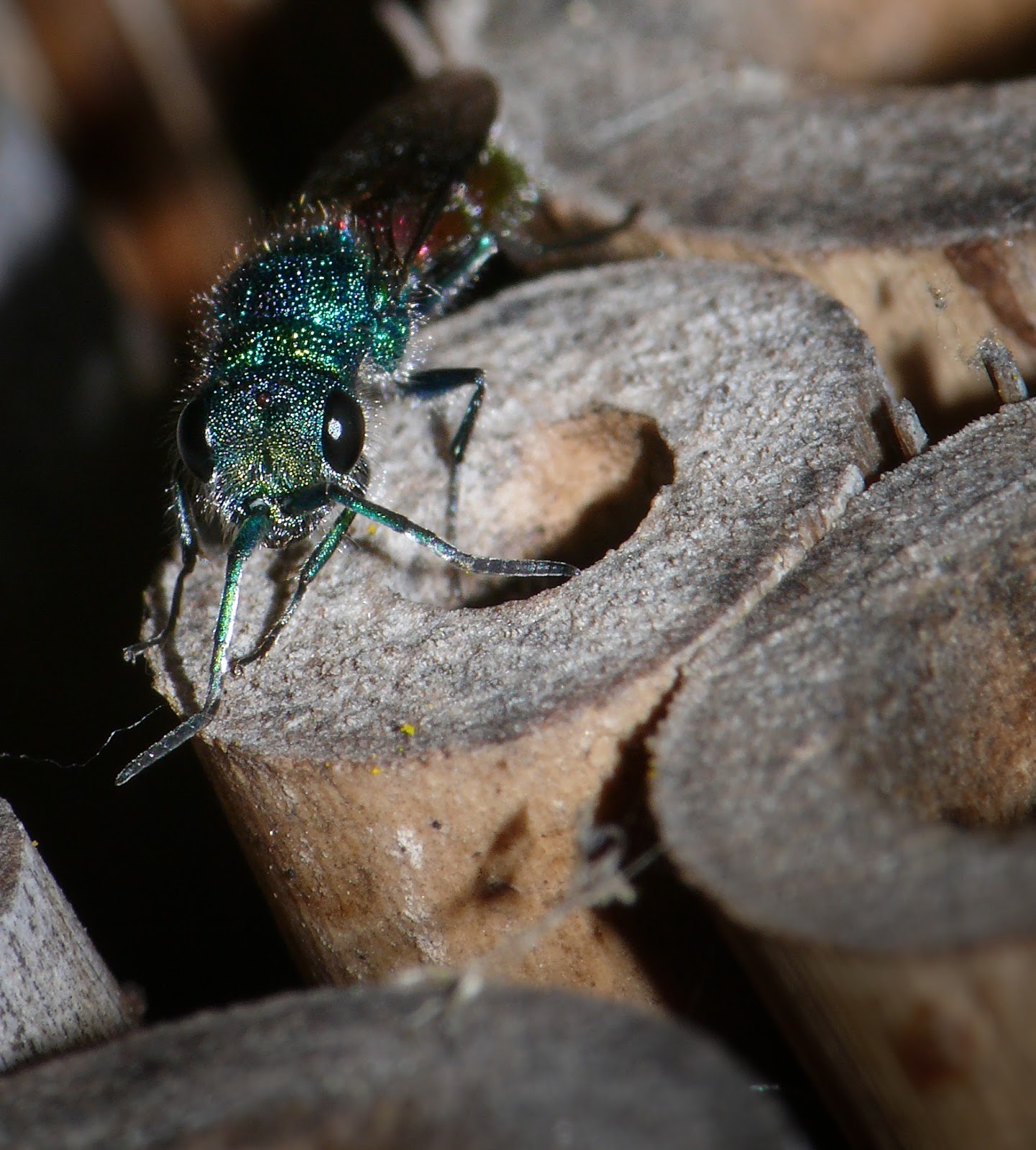 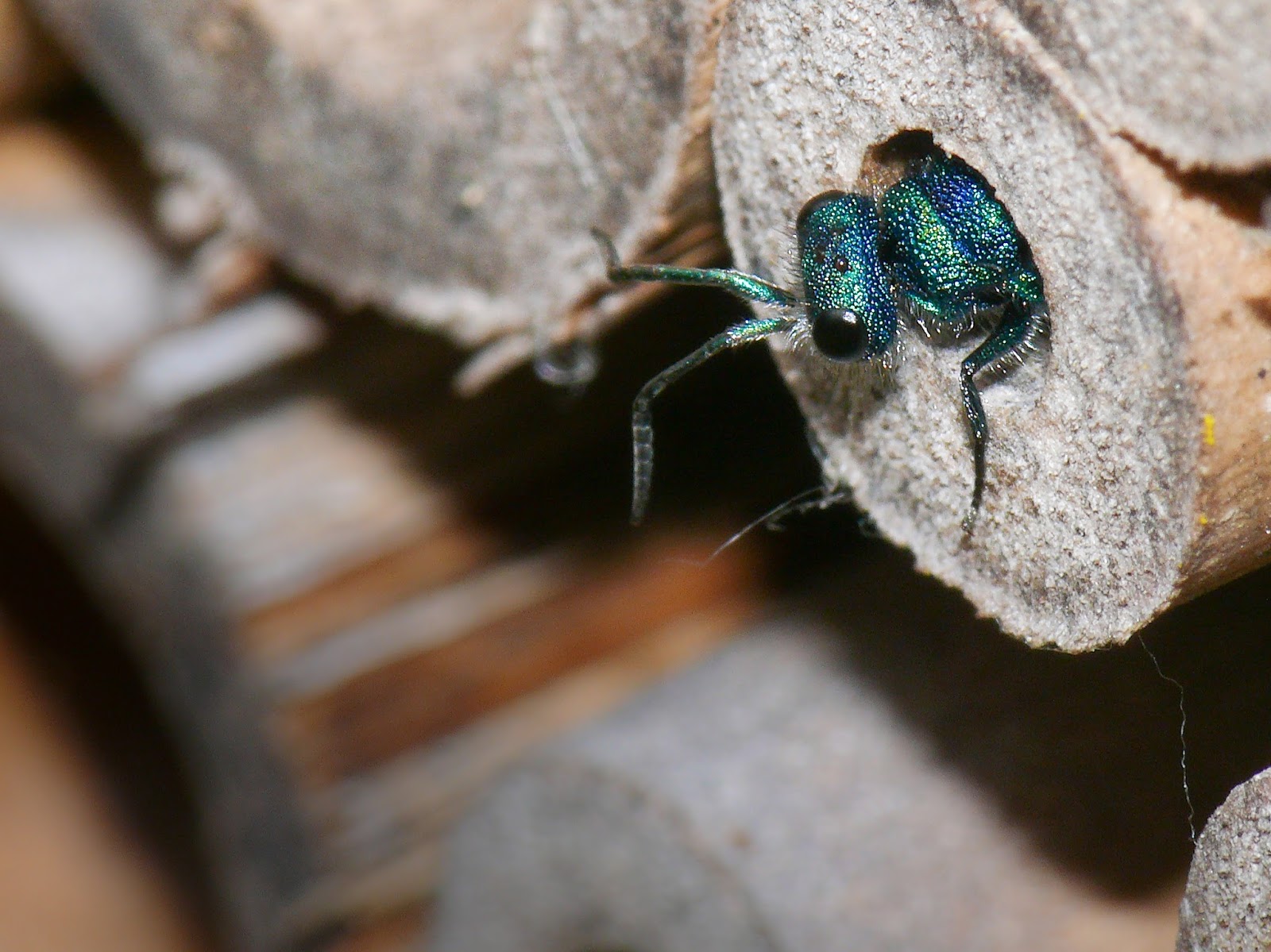 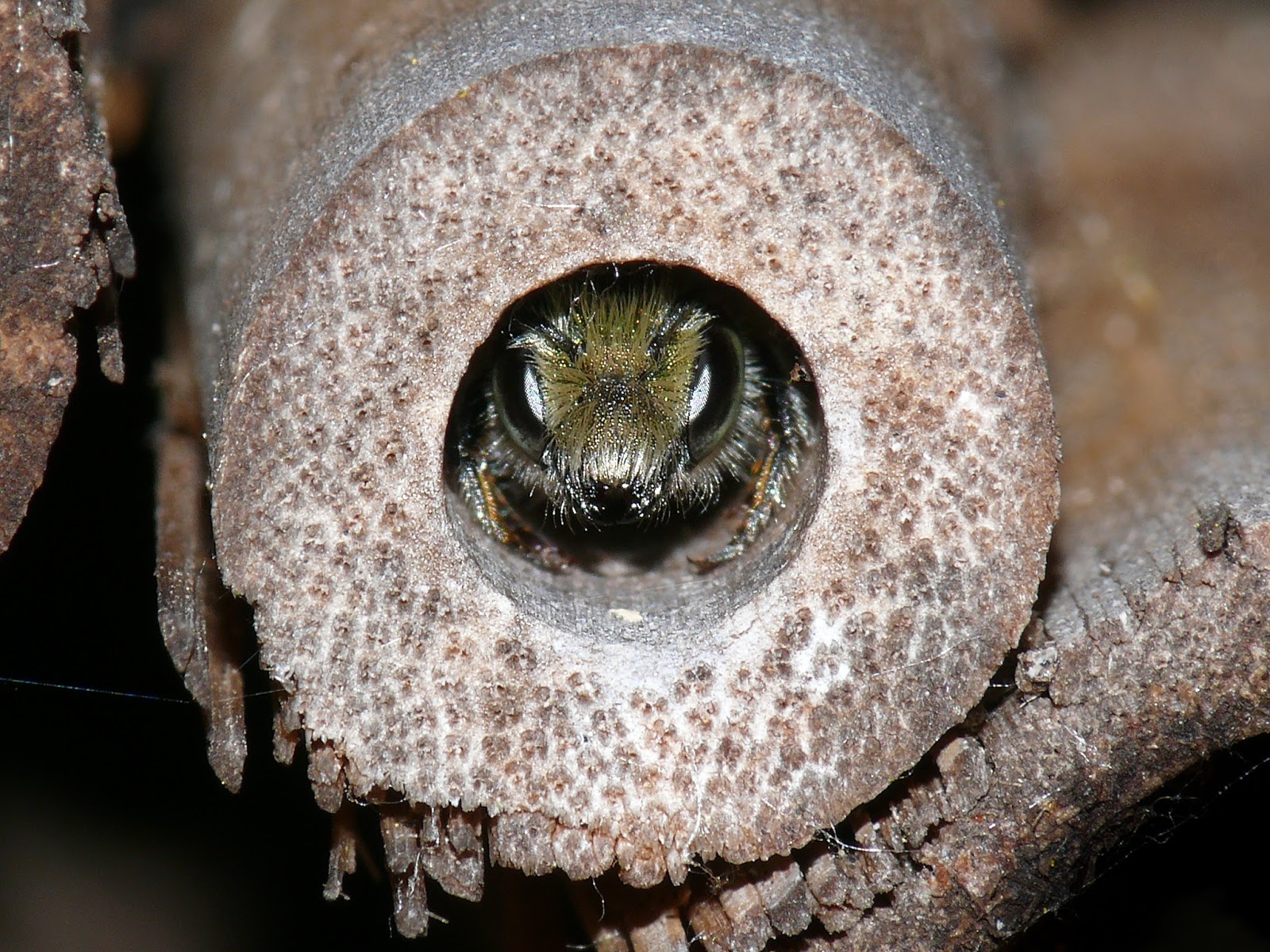 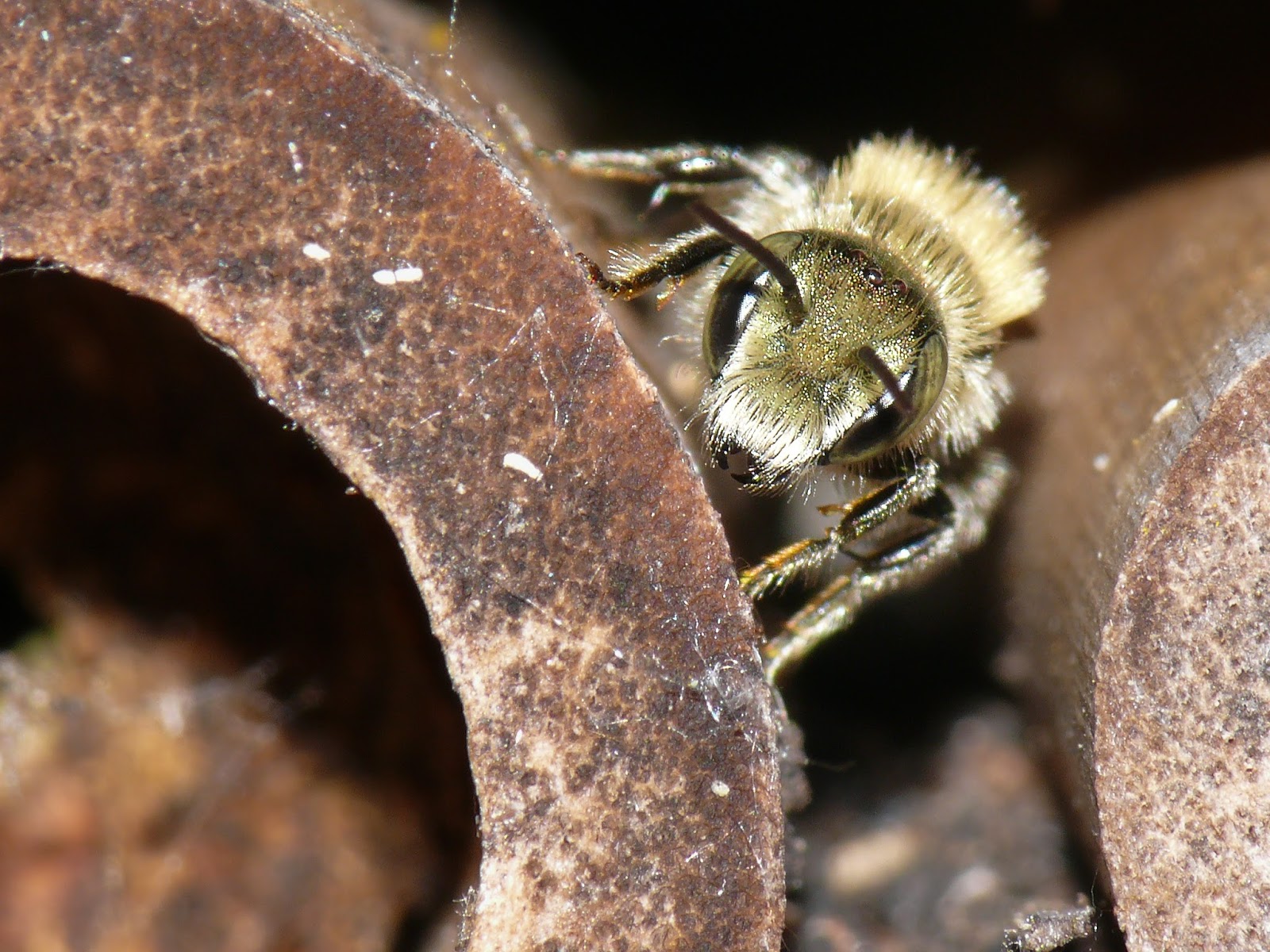 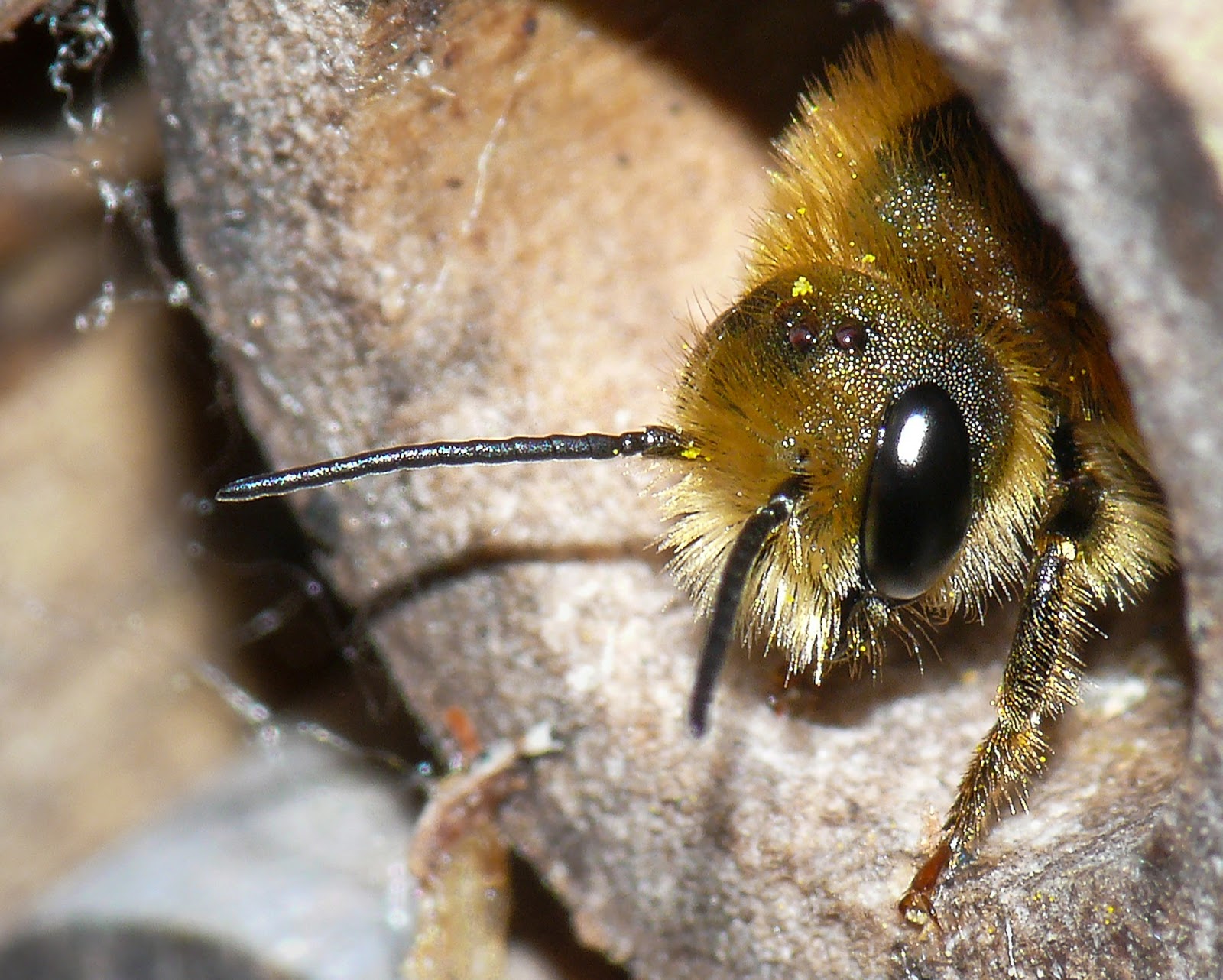 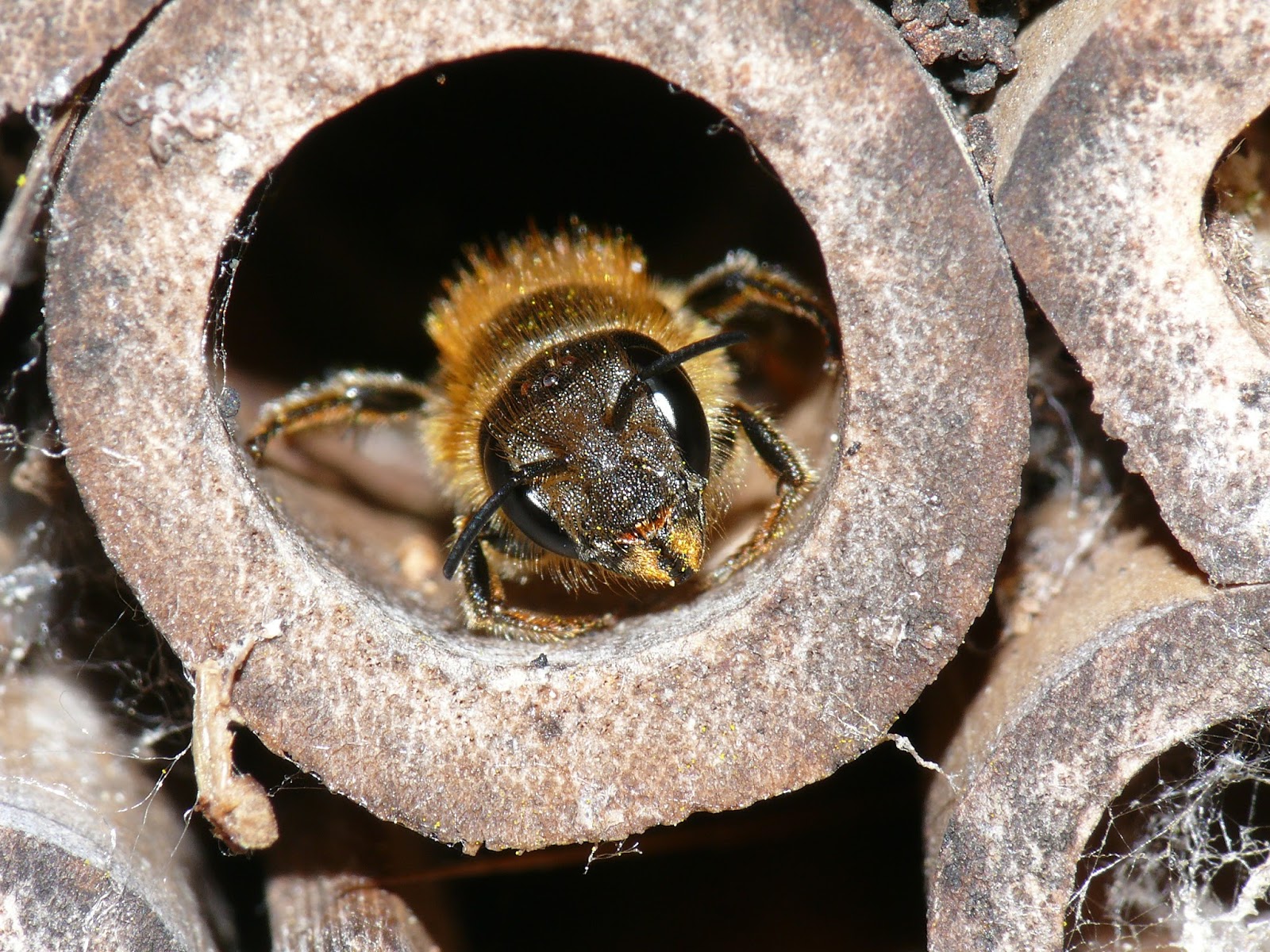 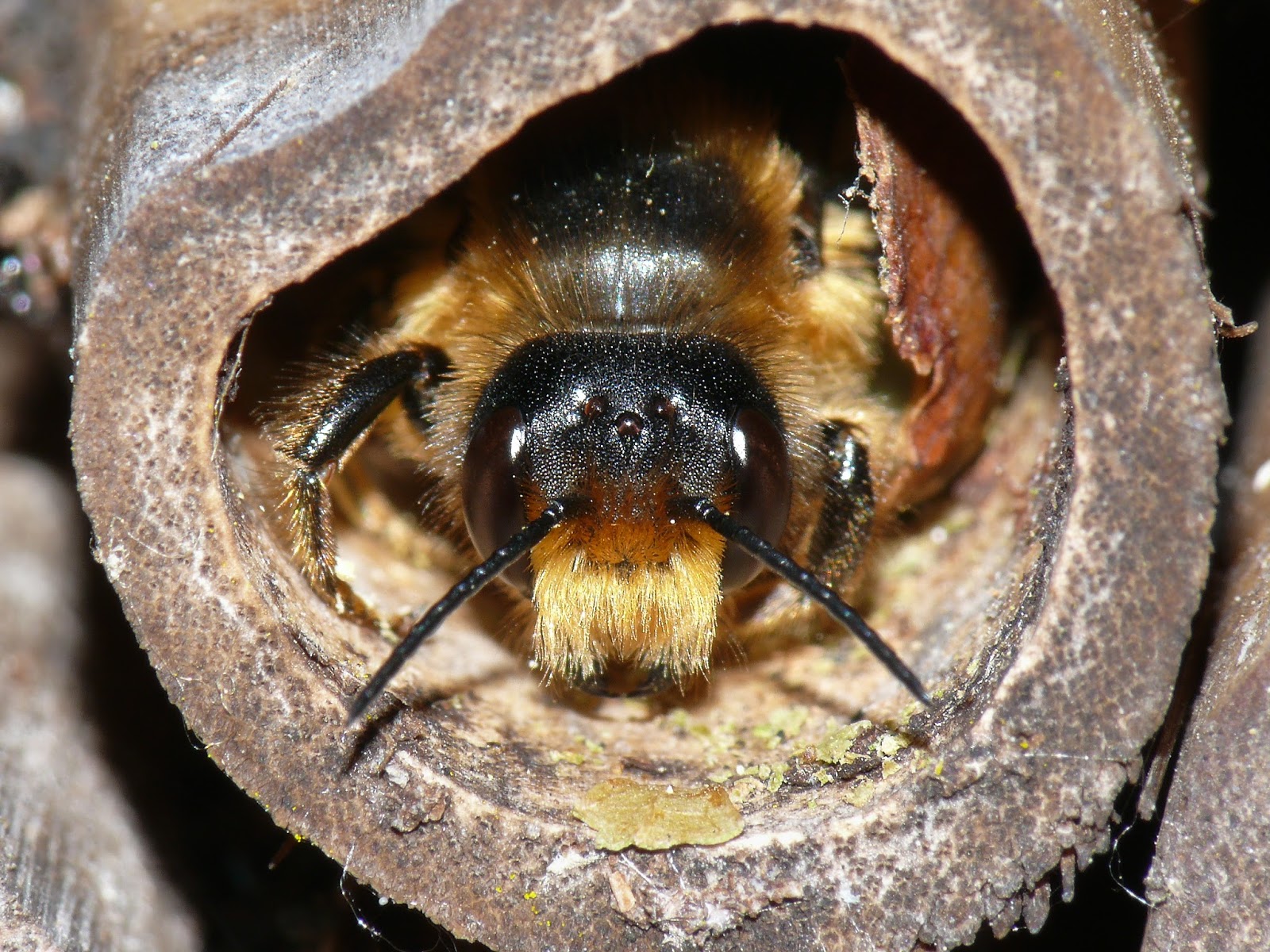 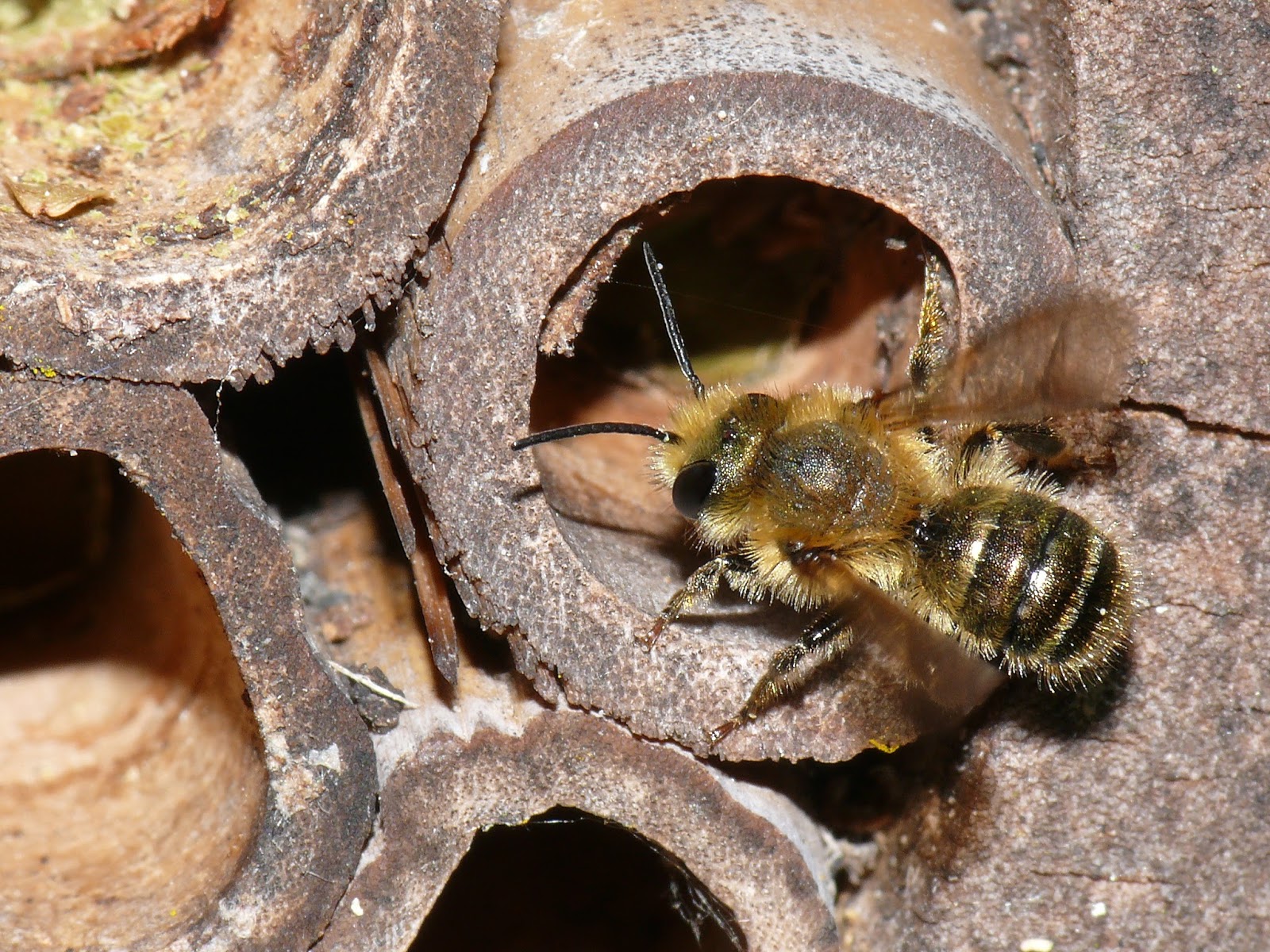 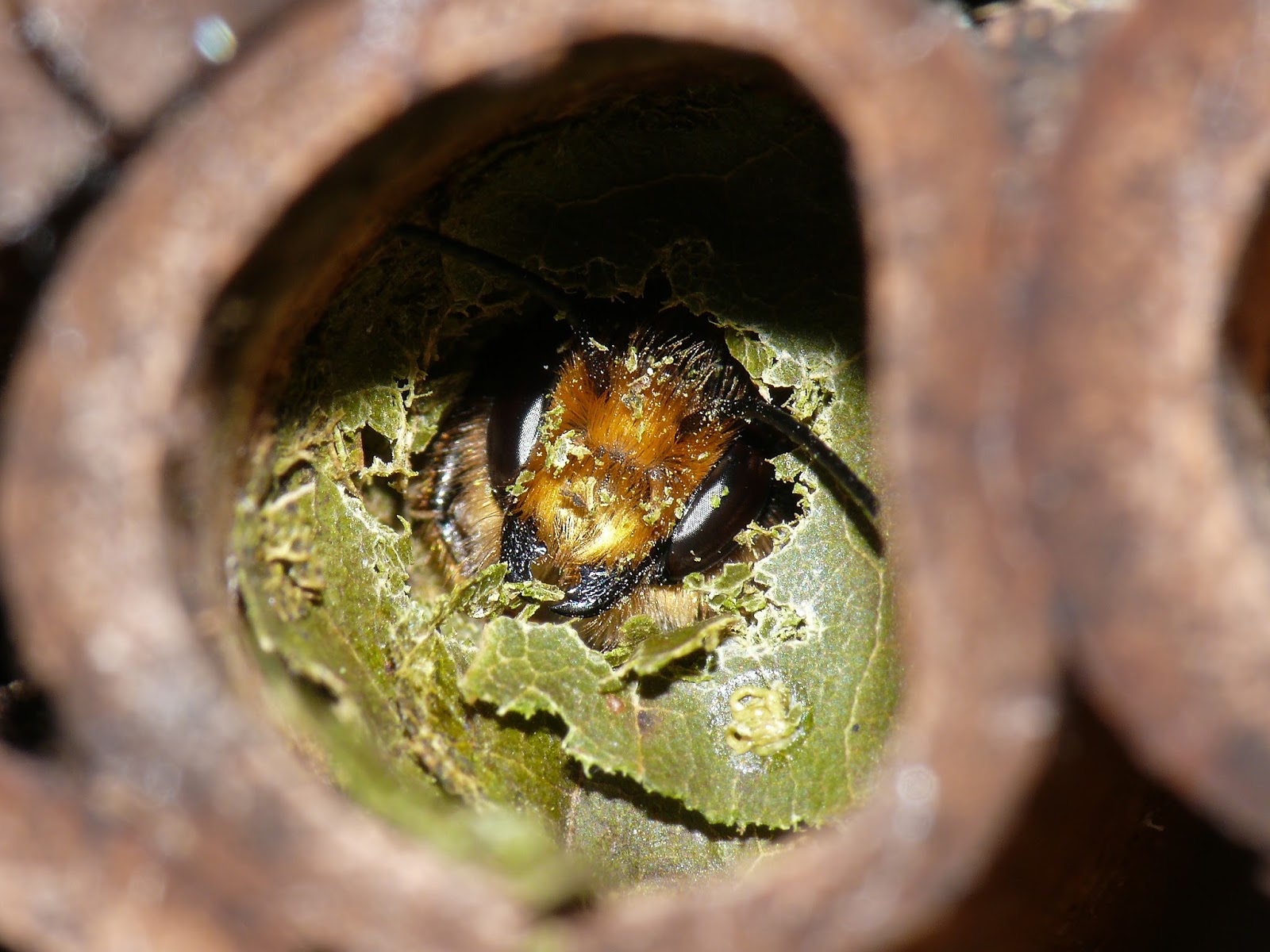 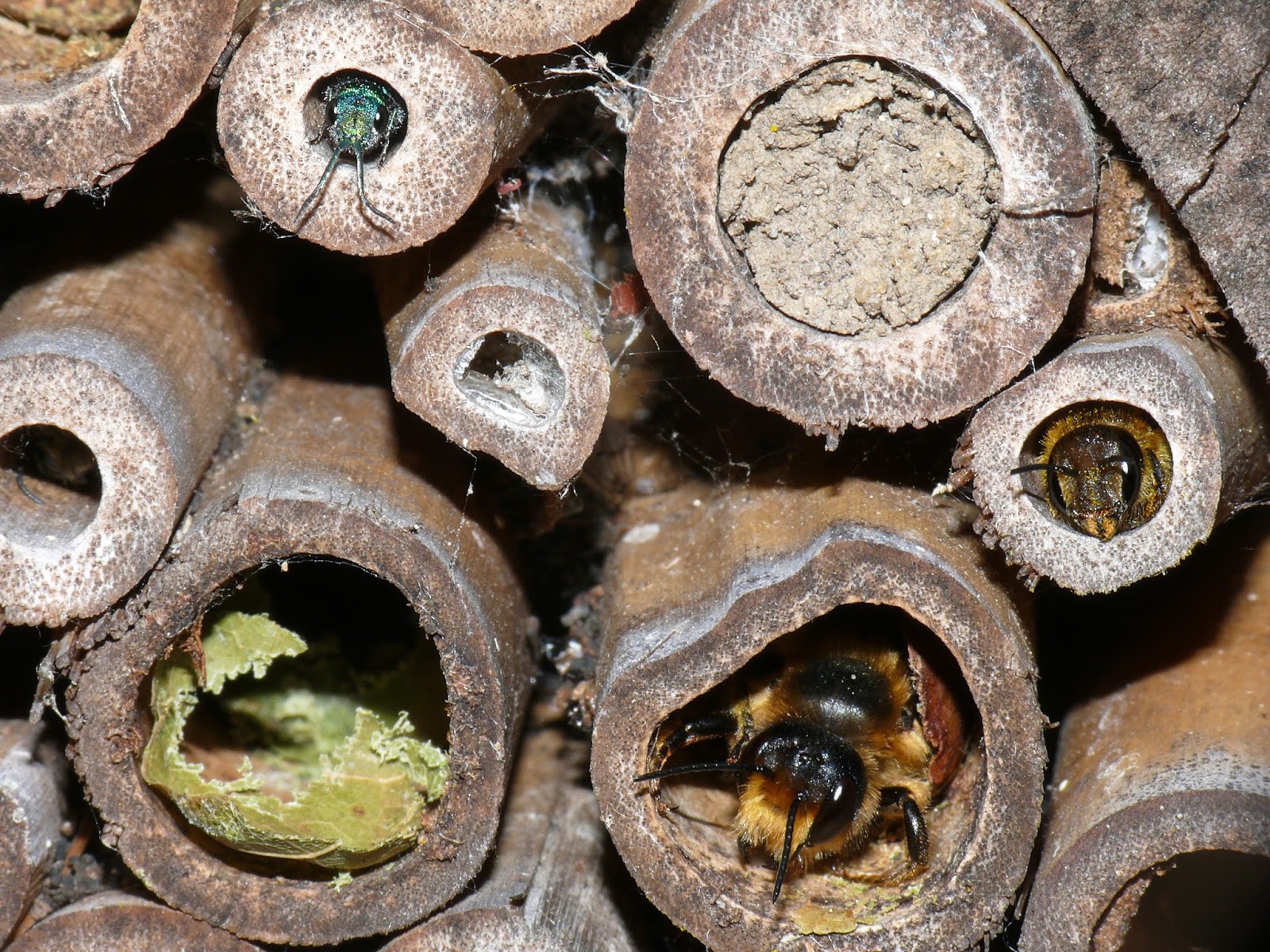 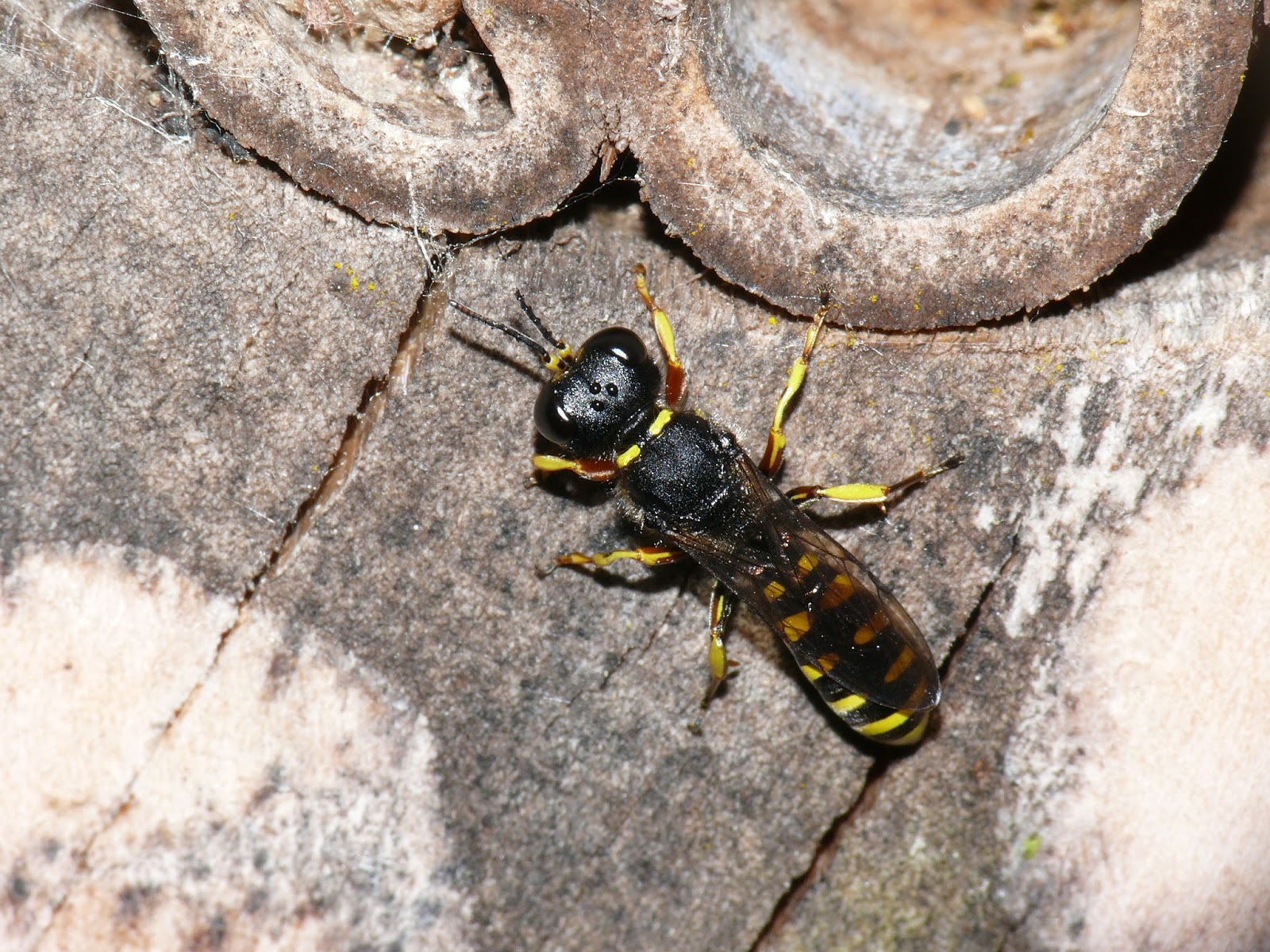