Querquedula doo. (My dame has lost her shoe).

Spring is springing and the cockerels are crowing.

Not just the cockerels either…

We’re getting perilously close to 21c (70f) down here (although I think Scotland has already hit that magic mark, briefly yesterday).

Today I’ve seen the first shorts being worn by people that weren’t jogging and also my first couple of cases of sunburn (forgetting perhaps that the sun is as strong now as it is in late September?).

The ground is warming up – and the grass has started growing (after the soil temperature reached and stayed at 5c for a few days).

The worms are turning – last night was one of those fantastic still, spring nights down here when a few minutes in the garden turned into a sound-fest from worms moving in the lawn, woodmice scuttling through the shrubs and hedges and migratory birds uttering strange plaintive nocturnal cries in the dark skies above.

I’m hearing these calls more and more now (it’s the right time of year for many birds to get going). I’m told these strange nocturnal flight calls come from water rails, or grebes, or wading birds such as golden plover, snipe or woodcock – I wish I knew which though – it’s fascinating to hear them at night overhead.

The birds mentioned above all tend to fly (and indeed migrate) at night, to avoid predators such as peregrines – although more and more these days, peregrines live in conurbations which are lit at night – and pick off such night-flying birds as a preference sometimes. It’s not uncommon to find woodcock and jack snipe (for example) to be the main source of prey at this time of year for our urban predators.

As for the garden birds - we have blackbirds sitting on a nest as well as blue tits building one in a box next door. The dunnocks are holding regular threesomes in our shrubs and I heard a goldcrest actually sing today for the first time this year - the courting seems to have started.

Our poplar trees had pushed out large catkins for a week or two now – and this week they’ve been joined by lots of fresh green nascent leaves, unfurling from the many, many buds – a treat to see.

Scurvy grass is flowering along our roads (and in our garden as it happens) and there are iris shoots pushing out of our pond as well as speedwell and dog violets in the garden.

Talking of the pond, it’s now full of frogspawn, which is, as I type, beginning to “hatch”, but still… each night we have a handful of male frogs “singing” from the inky pool – more in hope than anything else I guess – I’ve not seen a female frog in the pond now for a few days.

Bee flies are out and about, probing the primroses, and hanging motionless in the air from invisible wires.

The first of the dung flies have found our girls’ (hens’) droppings and are making hay whilst this sun lasts.

I’ve today seen my first mining bees and it won’t be long before my favourite bees (the “solitary” bees such as the red masons and leaf cutters) are out and about, to join their larger, zippier cousins, the feather-footed flower bees which have been out for a while now, along with their primary source of food here, pulmonaria.

Migratory and vagrant birds are being seen all over the gaff. Locally there have been sightings of ring ouzels, wheatears, swallows, ospreys and Mediterranean gulls, (to name but a few) and today I went to a local lake (my old stomping ground with my walking partner) at dawn to see a scarce summer visitor to our shores – a bird that I don’t actually remember ever seeing before.

The bird in question was a garganey. Anas querquedula. (Incidentally, Anas means duck in Latin, and querquedula literally means “softly quacking” - no… I don’t think I’d have named it like that either).

I was always going to go for a walk ‘round the lakes with my old walking partner during Easter anyway, as you never know what you’ll find in the mud at this time of year – from teal (check) to green sandpiper (check), so it wasn’t a “twitch” as such – before any of you start on me.

Pumpkin (my old walking partner) had found the bird first a couple of days ago on a solo walk, and after I identified it and reported it to the local bird club, I felt I at least had to go and have a wee look at it – as I’d not seen one before and only around 50-100 pairs are said to breed in the UK each year – common it is not. Seems like after I reported the whole world wanted to go and see it looking at THIS.

Well of course we found it – it really is a lovely wee bird – a bit bigger than a teal (incidentally, it is also known as a “summer teal”, (e.g. sarcelle d'été in France) on account of it being the ONLY duck species to come here to breed in the spring/summer (and head off again in the autumn, often to sub Saharan Africa – unlike most ducks which are either resident or winter visitors)). 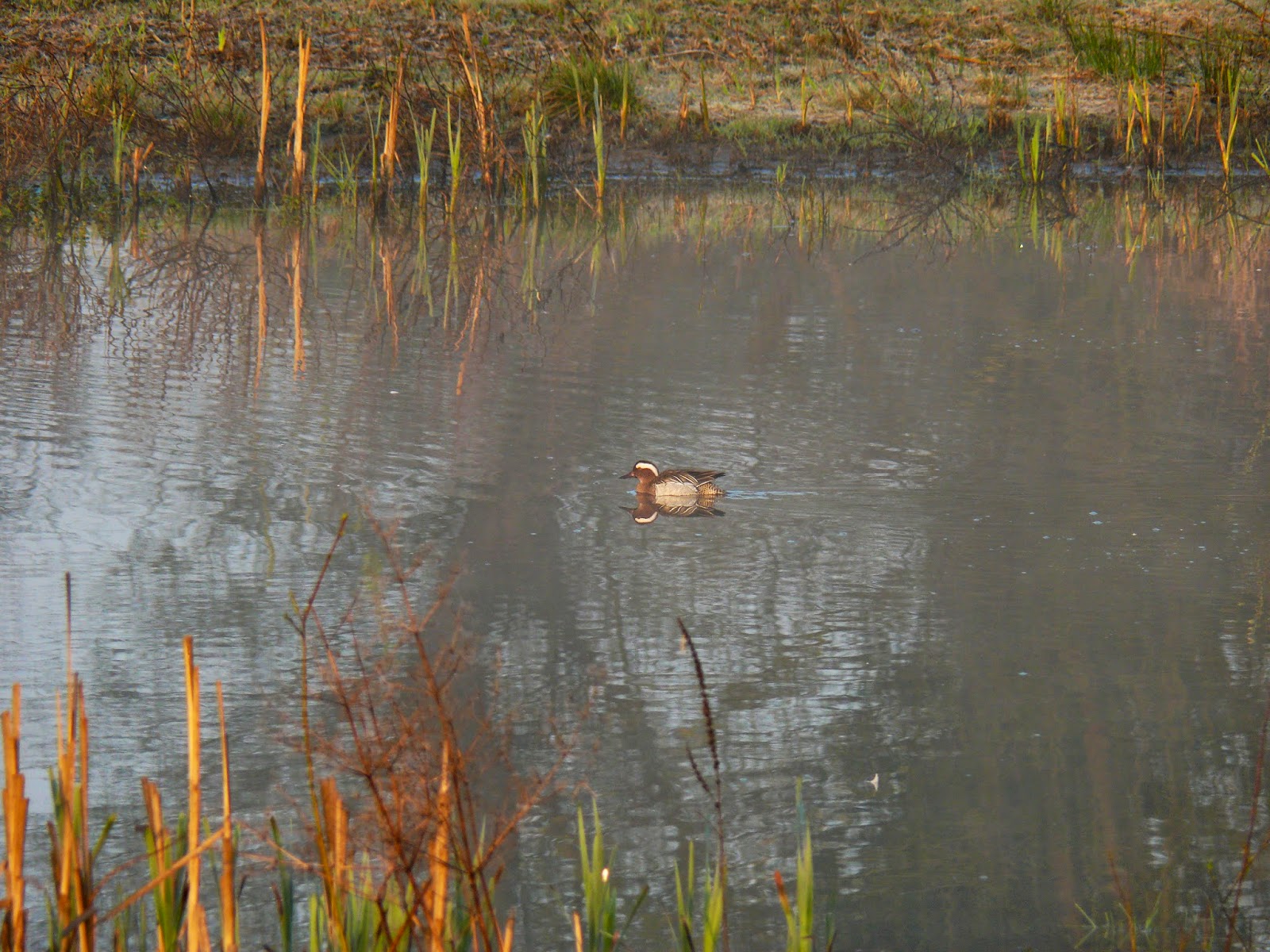 Despite its querquedula (doo) name, this lone male garganey wasn’t quacking nor crowing like a cockerel this morning in the golden dawn mists, but because a female hasn’t appeared with this male, we don’t think it’ll stick around for much longer – it needs to find a duck to mate with… maybe then it’ll start crowing? 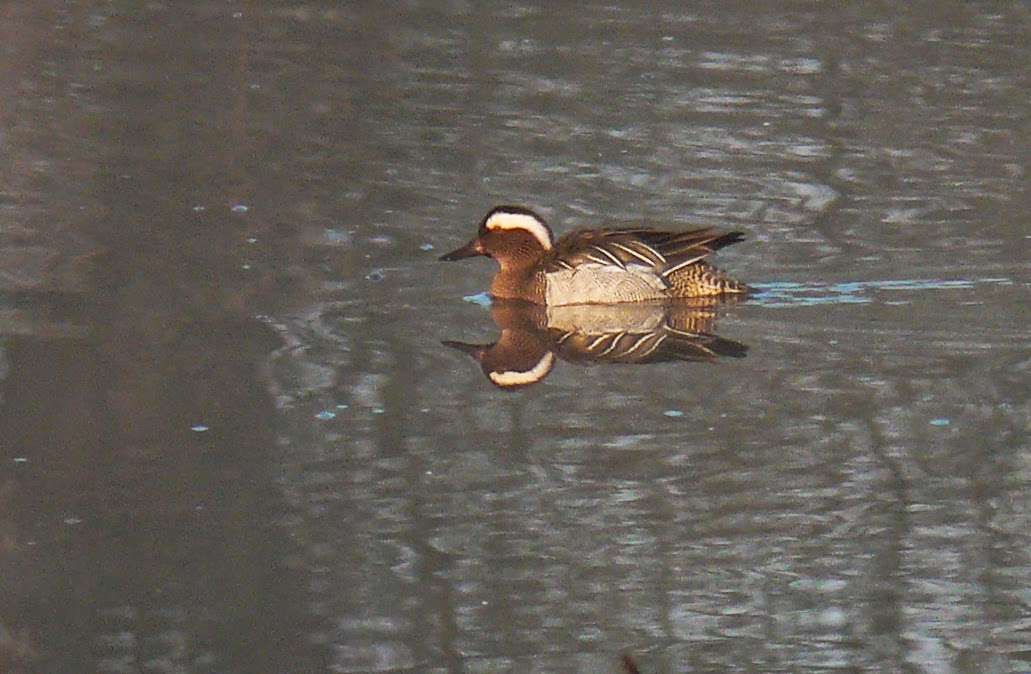 Querquedula do!
My dame has lost her shoe,
My master's lost his fiddlestick,
And knows not what to do.

It won't be long now!