Putting my foot in it. (innit).

Like everyone I expect; I’ve stepped in or on lots of things over the years.

But some not-so-nice things too.

I’ve stepped in or on plenty of dog faeces in my plimsolls when I was a boy (I think that issue is generally improving since my childhood –  I remember regularly digging dog crap out of the treads on my trainers will a table knife - and retching all the way through the process).

I’ve stepped into a freshly torn-open frog with my bare feet (in the dark) when I was single and had my own flat.

I’ve stepped on a queen bumblebee once and been stung for my lack of attention.

I’ve stepped on a rusty nail that went straight through the sole of my shoe and into my foot. That smarted for a while, I can tell you.

I’ve even managed to accidentally step onto a hedgehog in Turkey once! It didn’t react well – poor beggar.

And I know it’s not just me. Before we were married, my wife and I briefly lived in Tottenham. We were walking across the Tottenham Hale retail park one “hat” summer’s day, in trekking sandals (no socks) and my wife did something she couldn’t repeat if she’d tried a thousand times.

She somehow managed to put the rubber toe of her sandals down hard onto the very edge of a dropped Kentucky Fried Chicken sauce pot and burst it. The wee pot exploded and emptied its entire contents of sticky, lurid, stinking “BBQ sauce” not under her protected (by the sandal’s rubber sole) foot but instead all over and in between her exposed toes.

Ah yes...... Tottenham.  Or “’nham” as I often refer back to it,  whilst staring into the middle distance with tortured, bloodshot eyes that have seen things that just shouldn’t be seen, you know?

Anyway. Everyone steps in things they shouldn’t every so often right?

But I’ve not once had what happened to me this morning happen to me before.

And to be honest, I doubt whether it will happen again. Now I know better.

But read on if you like. I’d be interested to know if the below has ever happened to you?!

This morning, I awoke groggily. I shook the semi-naked dancing girls from their deep slumber around the room and staggered downstairs to fix them all strong Bloody Marys.

As I went, I managed to unhook and retrieve most of the assorted items of frilly underwear that had been carelessly tossed into the chandeliers the night before.

The half dozen or so empty bottles of Jack Daniels, the bottles of Bollinger, the needles, pipes and associated paraphernalia could all wait as I shooed the goats and alpacas (all covered in brightly-coloured paint?!)  from the hallway and outside.

I didn’t know how on earth the huge blue peacock (tail fully-fanned, proudly) had got into the marble-floored drawing room or where indeed it had come from...  but I ignored it as best  I could as I searched for Worcestershire sauce for the Bloody Marys.

Sadly, my life isn’t as rock and roll as that.

This morning, as usual, I got up, had a shower and got dressed.

Put my boots on and laced them up.

Switched the kettle on for a cuppa and put the ‘TV’ on in the background to let the news wash over me.

Went outside with my cup of tea, checked the bird-boxes and slug traps.

Made sure all camera cables were dry and the tadpoles in the pond were still there.

There was SOMETHING in my boot.

My right boot that was tightly laced on.

Nahhh.... I thought to myself.... you know how it is.... you’re lying in bed and you feel a tickle on your foot or something and you’re CONVINCED it’s a spider.

But it never is.

So I carried on doing what I was doing...

Topped up the bird feeders and put a bag of rubbish in the bin.

Went back inside and made another cuppa and a bowl of porage.

Sat on the sofa for a few minutes watching Breakfast TV.

WO! There it is AGAIN.

There IS something moving around (or trying to?) in my right boot.

So I scrunched my toes around against the inside of my boot – attempting to crush the spider. I know that was cruel, I just didn’t have the energy or time to unlace my big boots. Although we have a colony of false widow spiders AND spiders called Segestria florentina on the walls of our house (both are known to give rather painful bites if provoked), it was FAR more likely to be a house spider.

I gave a scrunch of my toes and there was no more movement in my boot. I had obviously killed it with my toe movement or perhaps I’d imagined the whole thing. I’d see later when I took my boots off I guess.

I thought nothing more of it and finished my porage in front of the box.

IT WAS STILL ALIVE! WHATEVER IT WAS.  Still alive INSIDE my right boot!

That’s it I thought.

You’re history. Whatever you are.

I unlaced the boot (a pretty long-winded process with my size 14 clodhoppers) and took it off.

My boots are long so I couldn’t see inside the toe bit...  but I didn’t think to tip the boot out – to see what fell out of it.

I put my hand inside.

I held my breath (I didn’t want a spider bite, not from the spiders round ‘ere!)

My fingers touched something.

I yanked whatever it was out and immediately dropped it to the floor.

It raced under the sofa.

I turned my phone onto “flashlight mode” and pulled the sofa away from the wall.

And there in my old brown beanie hat  which had fallen behind the sofa (I had wondered where that had gone) was sitting not a spider..... but a woodmouse!

You know, I had probably been walking around in my boots for a good twenty minutes with that poor mouse squashed right up against the side of my boot. I have very wide size 14s – there would not have been a lot of room in my boots for a mouse. Poor thing!

This story ends with the mouse being released back outside where it scampered away, apparently none-the-worse for its rather cheesy experience.

A photo (taken with my phone) of the mouse climbing out of my beanie hat can be found right at the end of this post.

The moral of this story?

Even in the UK it’s probably best to check your boots before putting them on. And if you forget & discover there IS something inside your boot next to your foot, it’s certainly not advisable to wriggle your toes around trying to kill the unfortunate beastie. I mean what a way to go?

The advice would be to immediately take off your boot and NOT put your hand inside (like me) but to tip it out, outside.

That’s what I’ll do from now on, anyway!

But that would have given the game away straight away. 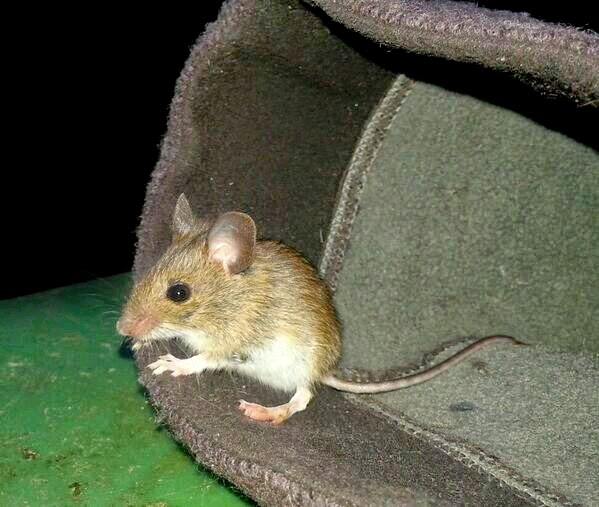