It has been a fair few weeks since I blogged  - poor health and incredibly busy work to blame.

Those weeks have seen us leap out of a stubborn winter and pretty-well straight into summer – at least it felt that way last fortnight or so and over the bank holiday weekend just gone.

The trees have suddenly leafed, ash is blossoming like I’ve never seen before, cherry blossom is rampant, as is white and blackthorn – and the flowers on the ground look like they’ve not flowered in years, such is their display this year.

Everywhere I look there are seas of gorse, dandelions or cowslips, forget-me-nots or daisies – spring has most certainly sprung – and with real gusto this year – I’ve already mown the lawn twice – unlike last year when it was too wet to mow.

I think we’ve had all of the expected bumblebees visit the garden in the past three weeks  (including the tree bumblebee which loves our ceanothus) even though there have only been daffodils, a few crocuses, some dead nettles and a little pulmonaria flowering in the garden so far – the invasive goldenrod is what they’re really after, but this wont flower for weeks yet....

What about the moths and butterflies?

Well.... holly blues, commas and brimstones (butterflies) have been fluttering around the garden for a fortnight or so now, joined by orange tips, peacocks, red admirals and a lone speckled wood last week – but moths have been thin on the ground so far – just the odd Hebrew character, the odd pug and a brimstone (moth) or two. Surprising really, as the days have been very warm – but then again the nights have been pretty cool and I’ve cleared an awful lot of vegetation out of the garden, and with it some moths I expect.

Other creepy crawlies that have appeared in the past fortnight or so include zebra and wolf spiders, nomadic and cuckoo bees, spider-hunting wasps and a few seven-spot ladybirds.

In the past month I’ve filled our new pond with rain butt water, and planted native plants into it. In turn we’ve had the odd small frog or two take up residence as well as a good dozen or so pond skaters - and many small diving beetles.

The pond will grow and grow as the year unfurls I’m sure, watched intently by the local heron which has already been investigating – on the lookout for frogs, newts and carp I expect (no luck so far – and there never will be re the fish!)

Whilst we’re talking of birds – all the winter thrushes have disappeared now, at least from this neck of the woods, though I do hear there are still some waxwings in Scotland. They’d best get a jog on if they want to bag prime breeding sites back in their Scandinavian homelands I reckon!

The blue tits that like to nest next door have started building their nest again (same bird box as last year) and our new pond is coming in handy for the hen blackbird who is lining her nest cup with mud in another neighbours garden right now.

The omnipresent woodpigeons and collared doves are doing their best to breed of course in every tree in the neighbourhood it seems.

I’ve not seen a jay for a week or three (maybe because I haven’t been feeding them their monkey nuts recently, but also perhaps because they’re now putting their efforts into breeding rather than feeding – garden sightings of jays do tend to drop during the breeding season, for obvious reasons).

The local little owls have bagged their next box (actually a barn owl box) like last year, but I can’t film them at present as their field is full of bullocks at the moment  - not particularly helpful as far as wildlife photography or videoing is concerned!

Best news of all re birds is the fact that the local barn owl that I watched survive the winter now has a mate in his tree.

I made this discovery only a handful of days ago as I drove past the owl’s tree more in hope than in expectation – and TWO round white faces peered down at my car. It was all I could do not to end up in the drainage ditch!

I’ve been back since.... well.... back to within about 400 yards and with my binoculars, got such a good view that I could a) see the difference between male and female owl and b) therefore tell which gender owl I’d been watching all winter – the male....

I’m really hopeful these owls breed – barn owls dont tend to breed very often in their life (maybe a maximum of three times), but the signs look good – its certainly a male and female sharing a tree – and I don’t suppose they’d do this if they weren’t intent on breeding.

Will we get hissy owlets soon? I do hope so – the only issue I think they’ll have is that their tree is RIGHT next to a busy country road. Now I know most drivers won’t notice the wee white faces peering down to their headlights from twenty feet up a tree or so, but a few might..... and then there are the cars to be avoided..... Good luck barn owls  - I’ll be watching from afar.

I suppose I should finish this blog post by saying that whilst I’ve seen swallows on their traditional telephone wires nearby for a fortnight or so – and I’ve had the swift CD blaring out of the side of the house for ten days now  - it was only today (7th May), this morning at around 7am, that I saw my first swifts of the year.

It sometimes feels like I base every year around these stupendous birds - I think that would be a fair assessment, certainly after leaving London and moving back to the home counties.

Virtually every year I see my first swifts of the year on the 23rd April or just after – certainly before May anyway. But not this year. I know the pair that I used to film and webcast in Reading arrived back on the 27th (I miss them terribly) but as yet I STILL haven’t seen any over Bracknell – the worst town in the UK for swifts it seems! The two swifts I saw this morning were chasing each other through a clear sky over Sunbury on Thames.

EDIT. At 1900hrs tonight (7th May), two of the best birds of all danced high over the house in a still-blue sky – completely ignoring the fool below with his camera and the CD of swift calls blaring up from the eaves of the house far below of course….! (Very poor photo below). 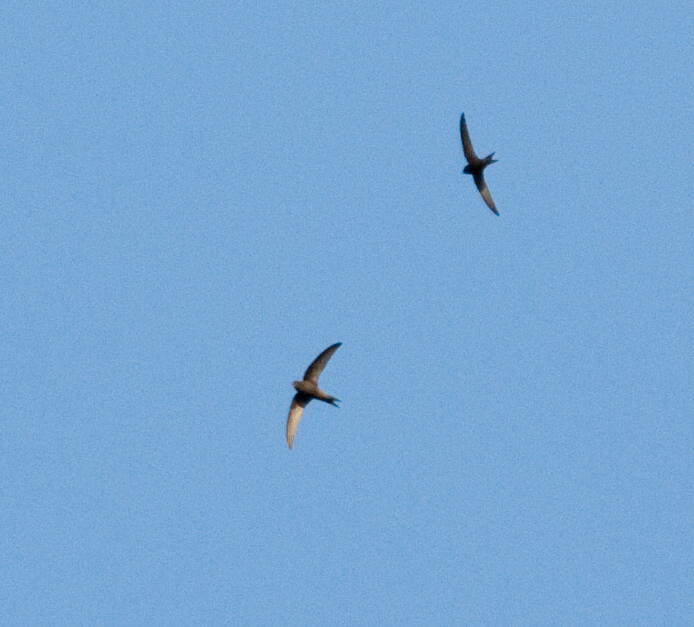 I did manage to attract the interest of a few “bangers” and “screamers” (swifts) last year by playing them their swift CD in late May – but such was the terrible weather last year, I’m not sure if they will return this year   - I do hope so and to that extent I’ll continue to play my swift calls until June and then again from mid July to tempt the departing swifts to investigate also.... The cameras are in place, just need some pioneering swifts to start nesting in a post-war ex council house in a post-war town now!