A few thoughts on the Yeti.

The Skoda "Yeti" (and other cars).

I don't really want to turn this "wildlife blog" into a car review site, but I've been thinking of the Yeti as a perfect car for my wildlifey life and thought I'd post a blog on the subject.

I tend to enjoy driving around the local countryside (especially the back roads north of Bracknell, lined by horsey-stud farms close to the polo clubs around Windsor and of course Ascot race course, in a crepuscular fashion.

To keep my beady eyes on all other things with beady eyes – owls, foxes, rabbits, deer, stoats, weasels, partridge, kestrels, sparrowhawks, woodpeckers...that sorta thing – and at dawn especially (rather than dusk when humans tend to still be around) – these beady-eyed beasties tend to be more visible to me sat in my 10 year old go-cart.

I often use the car as a mobile “hide” also  - from which to take photographs or get pretty close to wildlife – there’s little doubt that many animals (birds included) really do think “four legs (or wheels!) good, two legs bad” as Orwell wrote in “Animal Farm”.

At present I have a 2003 Skoda Fabia. Uninformed people still take the mickey out of Skodas, but as part of the VW group now (has been for over a decade), the truth is Skoda is a pretty good car these days – very good some might say.

When you buy a Skoda, you’re getting a VW on the cheap. Maybe slightly cheaper built also (and less frilly in many cases) but a pretty good choice all things considered.

Top Gear presenters (deary me) might still shake their heads and call us Skoda drivers “tightwads”, but that’s a bonus as far as I’m concerned – being disliked by people like Jeremy Clarkson and Richard Hammond. I’ve never been a badge snob – like the AUDI and BMW drivers that litter our roads these days. Admittedly, Skoda doesn’t tend to concentrate too much on looks – fine by me – I’m inside the car not driving from the outside, gazing at it.

Add to all that the fact that my little Skoda has a tank of an engine. The best engine that VW made for a long, LONG time – the 1.9 TDi – which never lets cars down – and also the fact that my wee Skoda has“elegance” trim (top of the range for Skoda – meaning things like heated seats, parking sensors, alloys etc).

The simple truth is my car is faster than the cars owned by most of its “knockers”, Faster, cheaper to buy, cheaper to run, less depreciation, cleaner, greener, more efficient, has more poke, more mid-range grunt, more torque, cheaper to insure, cheaper to tax and is cheaper to service. It also is better equipped than their cars, has more legroom, more headroom more boot space and is (some might say) more “fun”.

It’s a good car yes, but it is knocking on bit (10yo this year) and has does well over an eighth of a million miles, although that’s the other good thing about the VW 1.9Tdi – it really should be good for a quarter of a million miles like many diesels.

I’ve always been interested in cars and chose that Skoda very, VERY deliberately. I’ve never regretted it – but am tentatively looking around for a replacement soon. That’s if I manage to keep my job – I’m fighting for it again for the fourth time in 6 years right now.

Because we now have a kid and I have a RIB (to take shots of ducks on lakes) I might need something a little bigger than a Fabia-sized car. Also - I like to drive around bumpy farm tracks and back roads, cross fords and park on wet, grassy knolly kerbs or at the sides of fields, I might like to look for something a little higher off the ground but I’m certainly not convinced I need 4x4 as:

So I’m tentatively looking for a replacement motor then.

Disregarding situational constraints (you might NEED a 4x4 or estate for example)... there is only one set of rules when starting to look at cars as far as I’m concerned (if you don’t fancy taking your purchase down to the mechanics every two weeks).

Buy German (or German group) or Japanese (or possibly South Korean these days with Kia) – that is if you don’t do what everyone else does and buy a Focus or Mondeo (the ONLY Fords worth considering because they’re VERY good – especially the Mondeo).

To summarise, whilst I’d personally like to run a big Jaguar (maybe an old XJS or new F-type or maybe an old Landrover Defender – I don’t have money to burn at Garages sooooo...... –

My choices would be pretty limited to a Skoda Yeti, Octavia (estate) or Superb (estate) (who thinks of these names!?) or a Mazda 6 tourer. Or if I had a lobotomy before I made a choice – a Mondeo estate (like everyone else).

Now. I had to take my old go-cart into the garage this week for a big service – so I chose a YETI as a courtesy car to drive around in whilst the old girl was being patched up – primarily to give the Skoda crossover a thorough test drive.

This being a courtesy car is a pretty basic YETI – a 2013 2.0 CR TDi (not “SE” trim, not “elegance” trim either) – so no parking sensors, heated seats or anything frilly really, but what did I make of it? 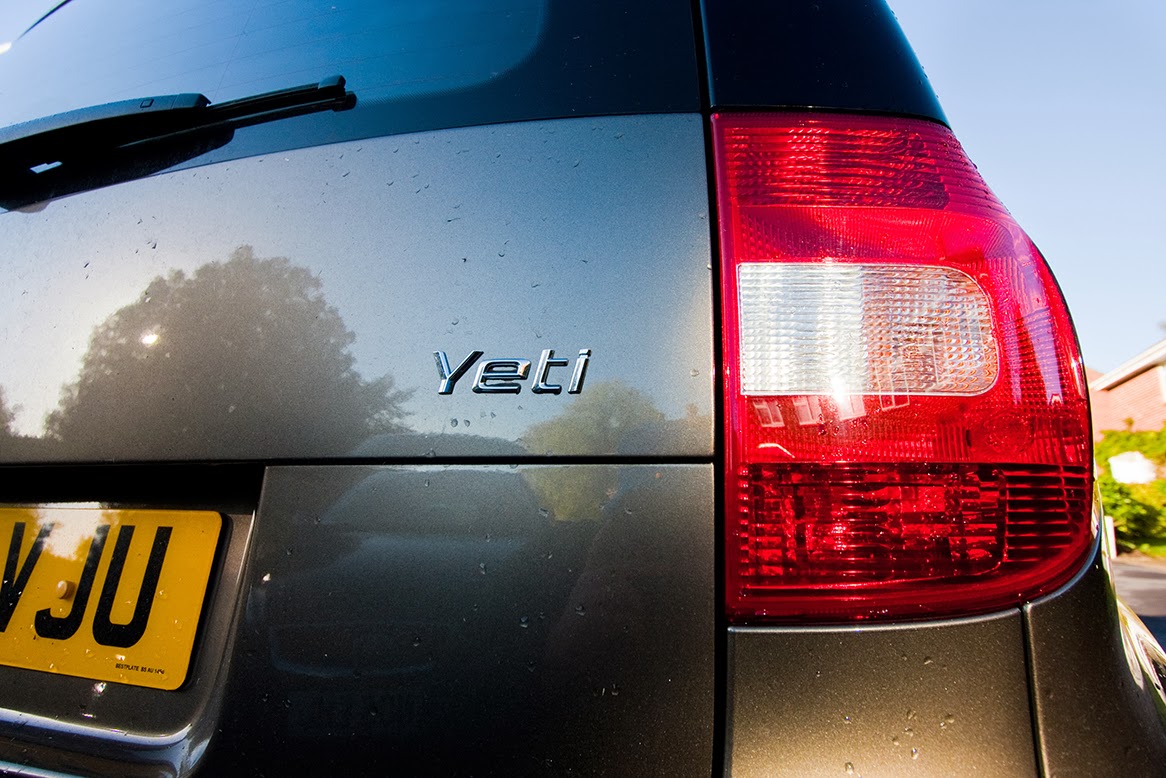 My thoughts are summarised below and I hope there’s maybe one person out there in a similar situation to me (apart from fighting for their job every 14 months) who might be somewhat interested in this short “review”.... 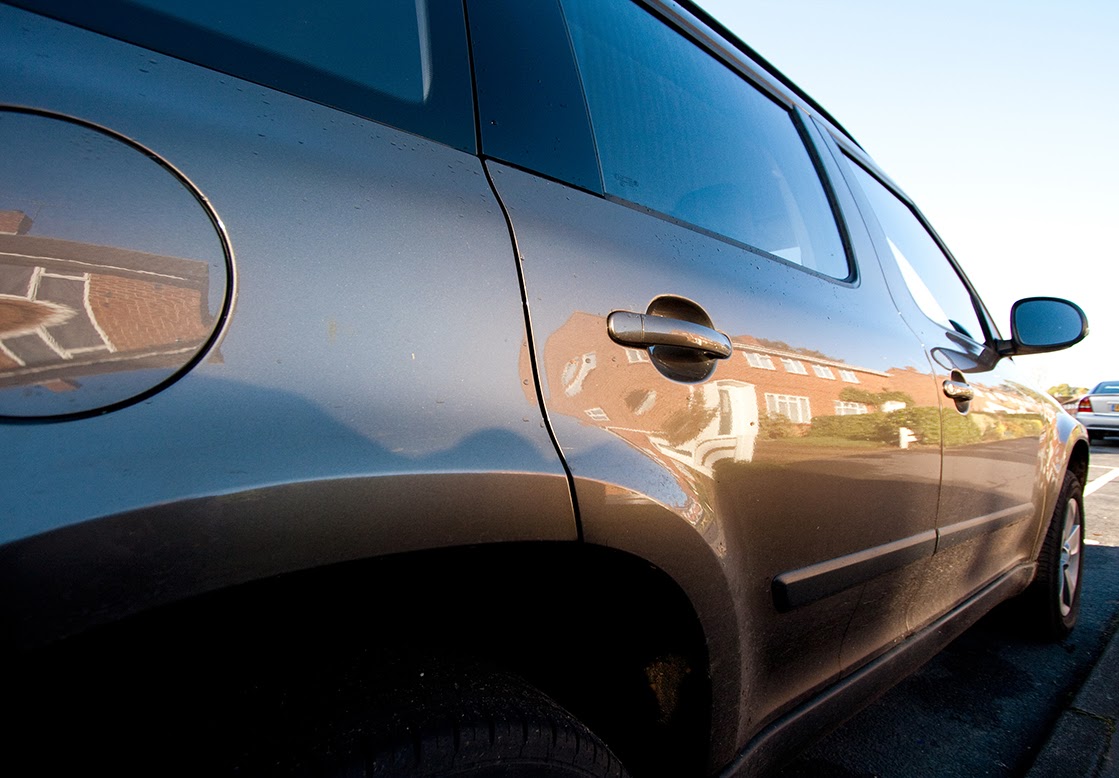 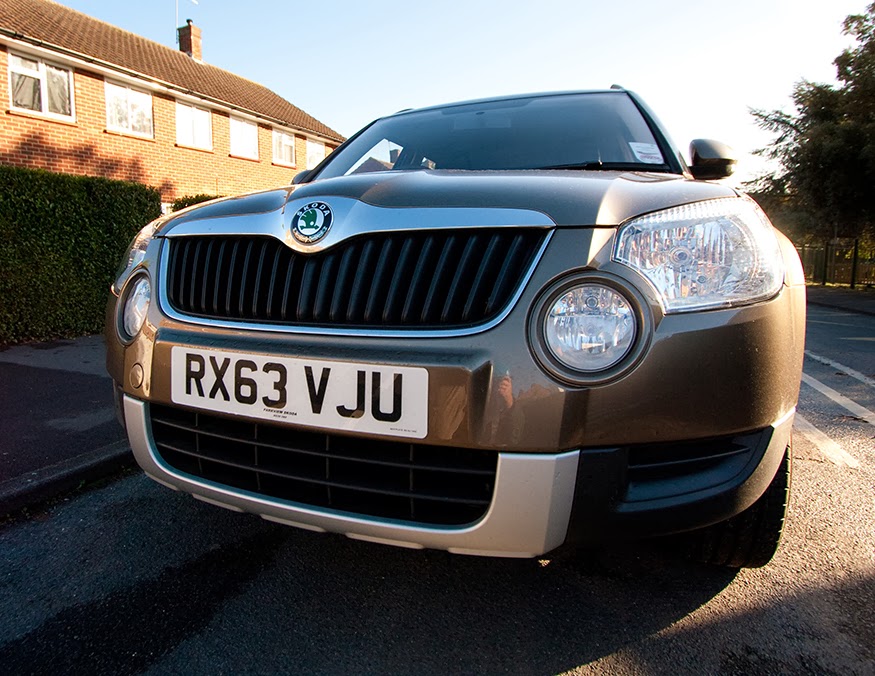 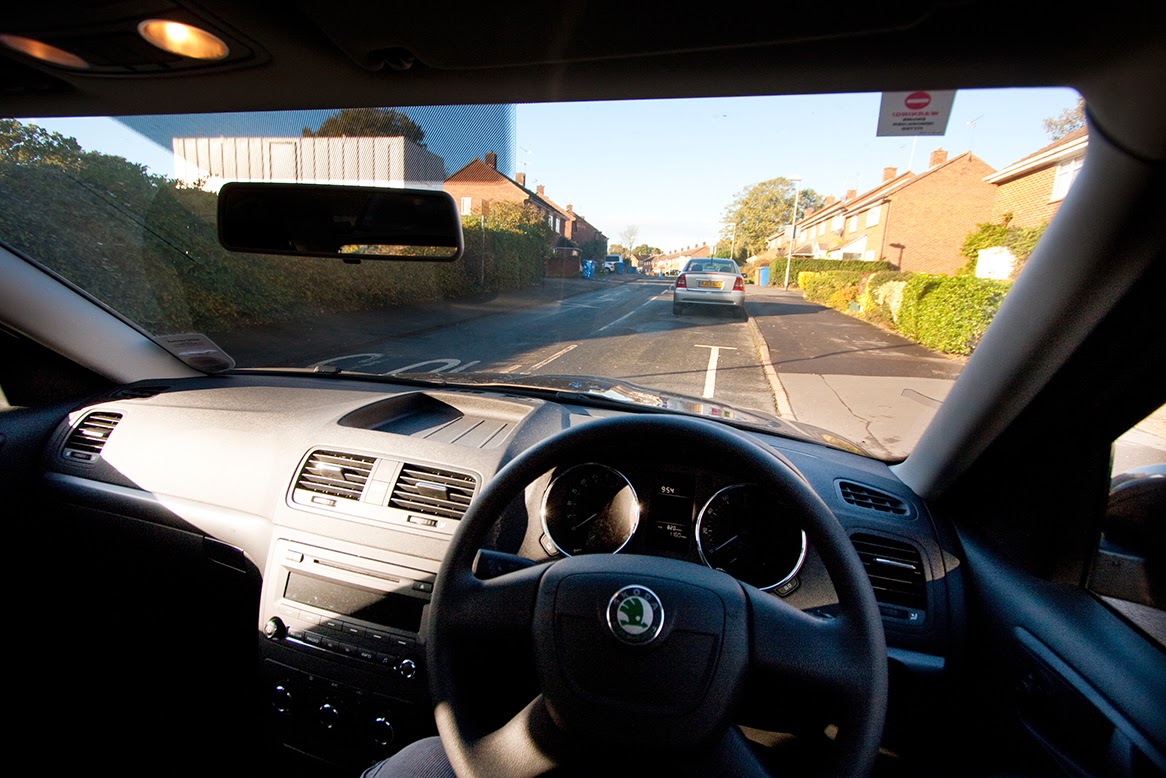 I liked the YETI. I liked it a lot.

I don’t care that people might still take the proverbial out of it (and me) because it’s a Skoda.

I am not convinced it knows what it is though – it isn’t really an MPV. It isn’t really an off-roader (certainly not the 2 wheel drive models anyway). It isn’t really an estate. It isn’t a cruiser. It isn’t fast enough to be considered anything like sporty (there’s no VRS YETI unlike the pretty sporty VRS Octavia). It suffers a bit from all this – it’s very much a compromise – a little of everything but not a lot of one thing.

If I was to buy a YETI rather than an Octavia (or even Superb) estate – I would have to get a 2.0TDi version – probably SE or Elegance Trim and insist on a heated front windscreen (to avoid having to have the noisy blowers on constantly). Oh.... and a panoramic sunroof too, but I do like sunroofs.

All that would make it a bit expensive really -well... certainly not the great value that Skodas are clinging onto, but there we go.

You'll have read above that I am concerned with the low position of the Yeti's rear view mirror. I'm not alone it seems. On the basic trim models (CR and SE) many people have complained about the lack of visibility through the windscreen (especially on long left hand bends or when looking left at a junction) with the mirror so low.

I tried lowering the seat a little to avoid this issue - which helped - but defeated the object of the yeti's higher driving position really - and I would now regard the mirror position as dangerous.

But. There is a solution - buy the £65 optional extra of "automatic lights" or "tunnel lights" or buy a Yeti in Elegance trim. This has the result of the mechanics (or robots!) glueing the mirror where it should be - at the top of the windscreen with a sensor in the mirror to turn on the headlamps when it gets dark (in a tunnel or at dusk).

It struck me this morning on a nocturnal owl drive that unlike most modern cars, the Yeti has ONE bulb (on each headlamp) serving dipped beam and full beam lighting (unlike the two bulbs in most modern cars).

Well.... in most modern cars, you drive around on dipped beam and then when hitting an empty dark bit of country road (say), you complement the dipped beam by ADDING the full beam (by turning on a different bulb). You are then driving with full beam AND dipped beam.

On the Yeti though, when you turn full beam on, the dipped beam disappears.

It's just different - that's all. It's a little unnerving driving with two bulbs instead of four and driving through a dark spot right in front of your car - but if you really are unnerved by it - probably best to switch on the fog lamps also when selecting full beam in dark, empty roads. Not ideal at all really - or perhaps investing in better halogen bulbs when selecting your yeti (at a cost of course).

YET MORE THOUGHTS (after a couple more days extensively driving it). 2nd November 2013

The Yeti's only real downfall now I think. But a BIG issue.

I've mentioned the rear view mirror placement on basic spec models (DANGEROUS) - but it's fair to also say that visibility through side windows at junctions is atrocious. Sit at a T junction at anything other than 90 degrees in the Yeti and you'll be moving about in your seat desperately trying to peer through the large pillars and seats to see if there are any cars coming. It isn't easy believe me.

Now I'm 6'2" (so not a giant by any means) and even though I tend to have car seats pushed back as far as they'll allow - I still had huge problems lookig right and left at junctions  - this issue would be even worse if you're of more average height and your seat is a little further forward in the cabin.

Visibility at night (through windscreen).

More issues I'm afraid. Again I should point out at 6'2" this is a personal issue but you'd need to be 5'10 or under to have no issue with what I'm about to describe.

At night the bright dials on the dashboard are clearly reflected at the top of the windscreen. This is not a head up display type reflection - it's a bright, upside-down reflection of your dials, all over the top of your windscreen - produced because the hood over the dials is not deep enough in the Yeti.

If you're of average (or shorter) height, this will not be visible to you - but if you are anything over average height, be prepared to have your field of vision reduced at night by the dial reflections in the screen (and the low rear view mirror and large pillars and seats!).

After a few nights using the Yeti it's fair to say that the headlamps are pretty dire. If you are to buy a Yeti I would absolutely recommend upgrading to better spec halogens before the car leaves the garage. You might not believe this - and choose the standard bulbs. But you'll be ordering better ones soon....

Final summary and thoughts vs an Octavia (for example)

It's well built. It ticks lots of boxes.

It has a great engine and can come with many toys.

It also is EXTREMELY comfortable.

But - it does have a major issue in visibility from the cabin, night and day - and for a crossover (where cabin visibility should be perfect) this is a big deal indeed. A deal breaker some may say.

Would I buy one (rather than an Octavia Estate say, which is faster, more economical, has more space and better visibility?)

Only (perhaps) on the basis that the Yeti is more comfortable.

I've not test driven an Octavia yet (I know the figures however) and the Octavia only loses out to its crossover cousin on comfort.

It beats the Yeti in all other ways....