The photo accompanying this blog post (and also below) shows our moon alongside Jupiter and three of her larger (Galliliean) moons (and a little camera flare, which for the first time ever in my photography, adds something to the final image I think). 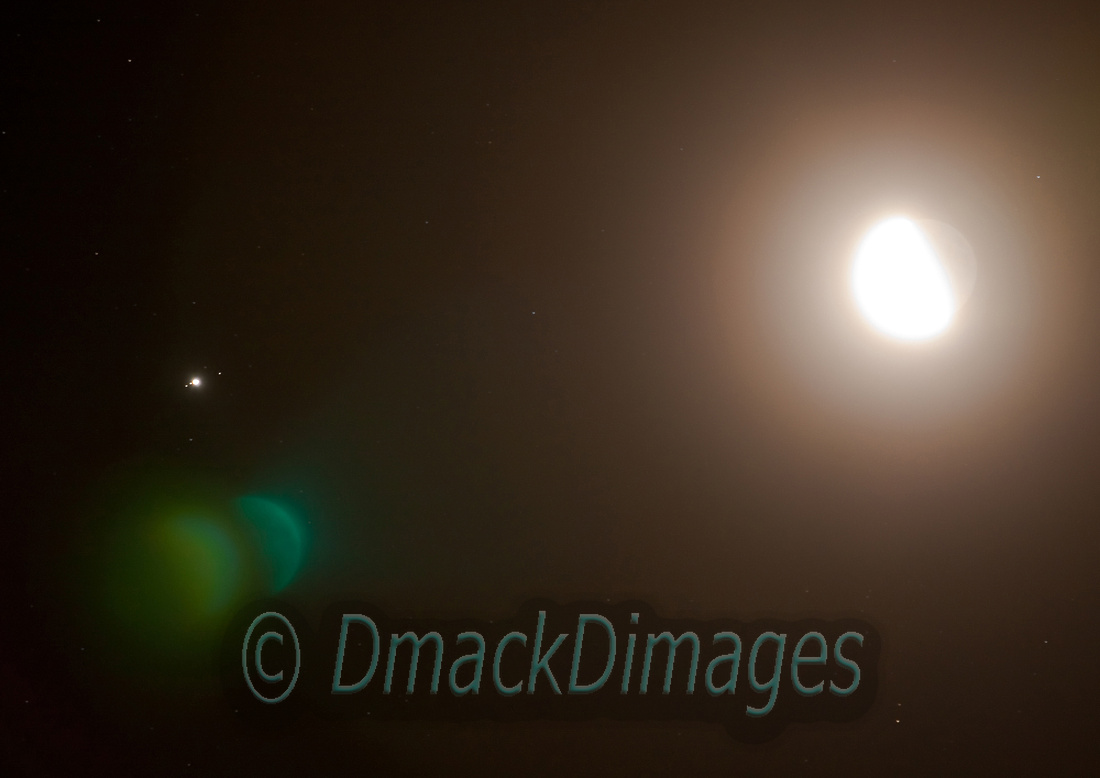 Our moon, Jupiter and three of hers

I took the photo (using a 200mm lens only and a 4 second exposure) at 0430hrs BST yesterday (Saturday 8th September) as the half moon lit up the glorious night sky very well. The pleiades, Hyades, Orion (my "winter constellation"), Jupiter and Venus don't half look pretty before dawn at present...

A week into September now and warm sun all the way so far (there'll be a little temporary breakdown early this week, but nothing much to speak of really).

This has brought out the dragonflies again (emperors, migrant hawkers and common darters in the garden, demoiselles at work), bats (common pips in the garden each night at dusk - regular as clockwork) and at least one more species of proper summer moths in the garden.

Last night I set up the moff trap for the first time in a while and caught my first Setaceous Hebrew character moth in our garden. The Hebrew Characters are quite interesting (well.... I think so anyway) as earlier in the year (before summer starts really) it's the (non setaceous) "Hebrew Character" that appears in moff traps in the south of the UK, but come late summer, especially warm late summers (August, September this year for us) the non setaceous moth disappears and its only the "Setaceous Hebrew character" that is flying.

On these moths, whereas I love moths names (the most interesting in kingdom Animalia) and can (sort of) appreciate why the Hebrew Character was so-named (it's forewings do look like they've had the hebrew letter "Nun" stamped on them) - the Setaceous Hebrew Character is one of those very poorly-named moths in my view (like the "Willow beauty" moth which is far from beautiful in my eyes).

Well... it looks like starlings and jackdaws have started to form their winter flocks, I managed to see two hobbies yesterday high over the farm (won't be long now before they're gone also), we've had our first real leaf and apple falls of the year (though we have a way to go on that score) and I noticed yesterday a very young female great spotted woodpecker check out the garden (we've had GSWs before but I've not noticed young until Friday of this week). Our larger sunflower heads have lost their petals and drooped, but three or more mini sunflower heads have miraculously appeared on two plants to see out summer (well.... the "golden rod" and buddleja have stopped floweing now, as have the cornflowers).

Our S.florentina (did you notice this species made headline news this week when Noel Gallagher found one in his suitcase... or something!) is still in place.

This morning I finally got a few photos of the local swallows who seem to prefer the horsey farmland a couple of miles away from our house and the old-skool telephone wires on which to perch. I'd meant to get a few shots of these very pretty birds in the spring when they arrived, but never got round to it. They're all lining up to leave now.... (a sad time of year for me).

Now of course the young have fledged and in the first photo below, you'll see two young (the second photo shows an adult with its longer tail, deeper scarlet throat and no trace of yellow gape). (That's the moon behind the swallows by the way). 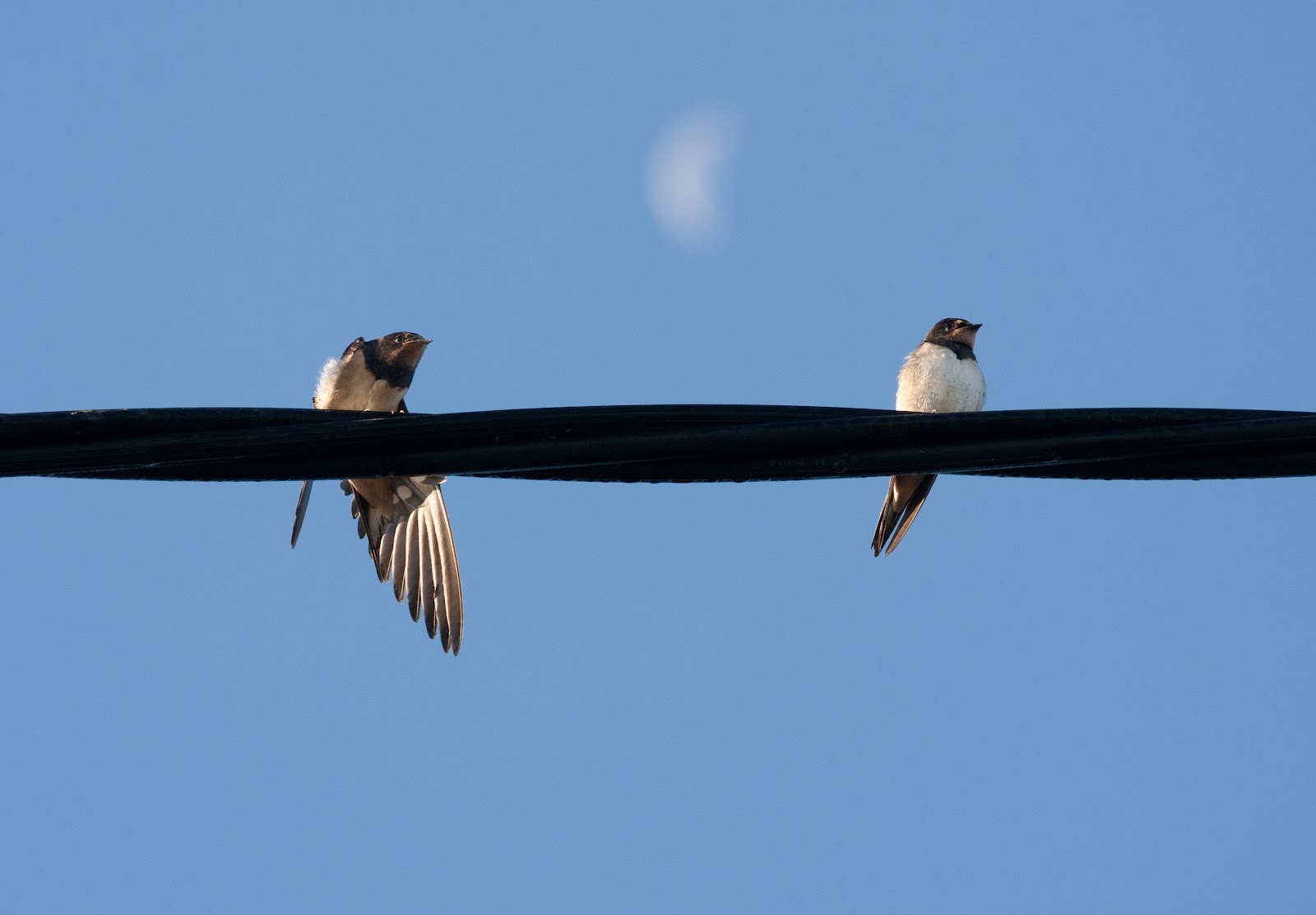 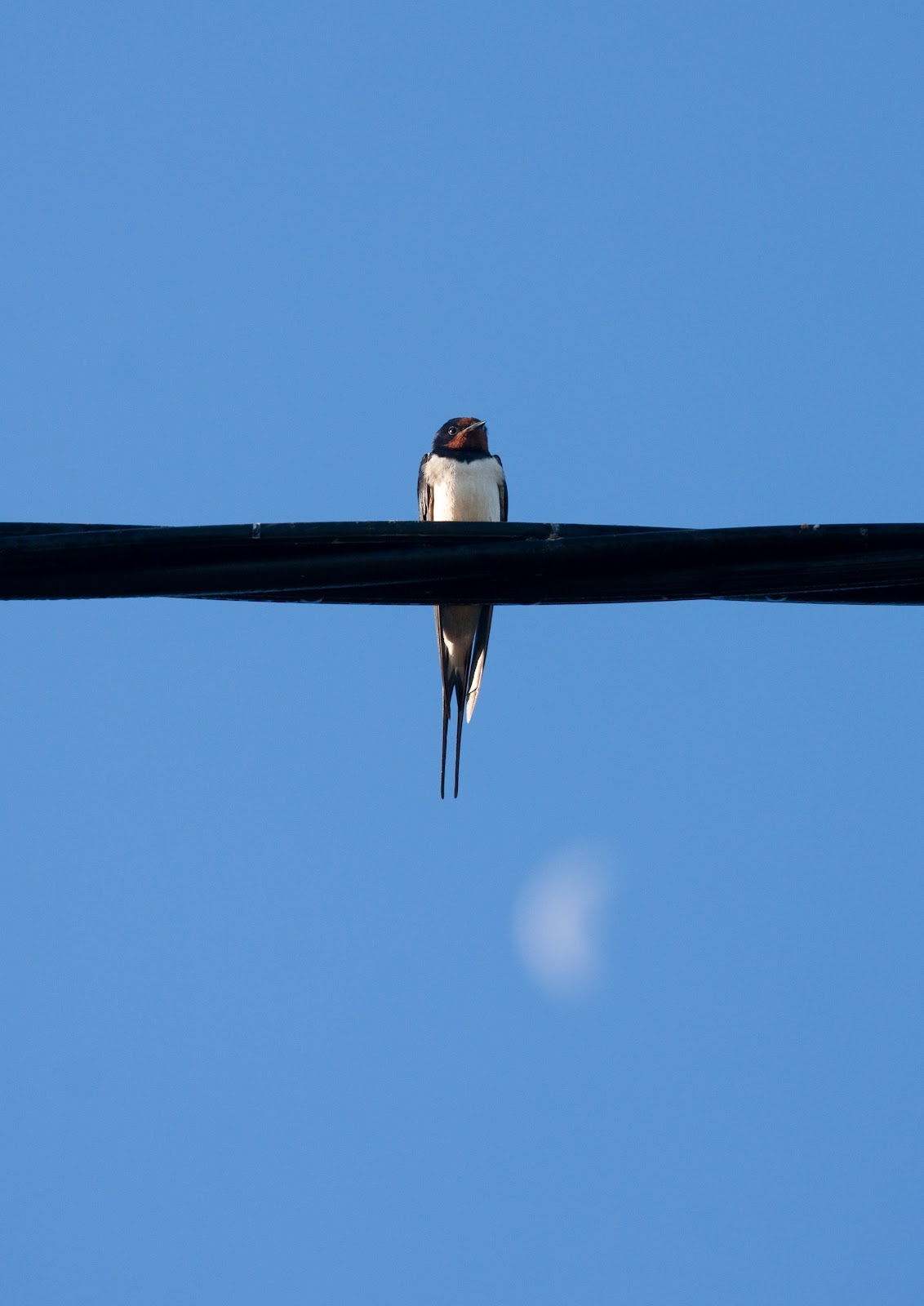 A  few house martins and other swallows have been flying south, high over the house in the sun (the swifts have either gone now or over the south coast).

Summer is nearly over (did I cut the hedge for the last time yesterday), but not quite yet....