End of the Olympics...

The weather has been great for the last few days - in fact, to be fair, it's not rained much at all since the schools (and therefore my teaching wife) broke up for their summer holidays.

This has coincided quite nicely (or maybe not I guess.... read on) with the London Olympics which like much of the UK public, Anna and I have been glued to each evening and occasionally all day! There's something quite perverse about sitting in a front room watching the best athletes in the world compete in glorious sunshine less than 30 miles from you - especially for two people (like Anna and myself) who love being outside - much more than most. Maybe it would have been better if it had rained all fortnight - then I'd not feel as bad sitting inside with the glowing goggle box on! Hey ho - it's been a fantastic Olympics (right from the opening ceremony) and what a great fortnight team GB have had. I am very much looking forward to the closing ceremony tonight...

Of course I have managed to crawl out of the house once or twice this week, blinking into the sunlight like an ancient troglodyte.

Anna and I have had our entire back garden fenced properly. This clearly is the first time this has ever happened at this house (built in 1953). Our house had been lived in by one family (or one woman for the last ten or so years) since the mid '50s and our western neighbours had lived there since 1953, so the inevitable border dispute reared its grotesquely blinkered head on more than one occasion. Never mind, my patient, clever, beautiful wife had made the peace (I just couldn't be bothered with the morons) and we now have a beautifully-crafted 6 foot tall feather edged larch fence surrounding our garden. Now that we can see our borders - the whole potential of this very large (120 foot by 40 foot with half a dozen mature trees) garden has revealed itself to me - I will be able to create a wildlife reserve in my back garden I think!

I have dug a few hedgehog holes under the fence (though I don't really anticipate ever seeing one here - but you never know) and spent yesterday constructing a shelter for our frogs (we have dozens as our neighbours have a pond and until recently, large parts of our garden were very shaded (3 foot of leaf litter depth under thick foliage) and incredibly overgrown. I also built a spot for grass snakes.

Firstly the frog home - this consists of a piece of corrugated iron laid down on grass surrounded by small bushes. The iron will catch the sun, but also keep a little moisture. It should go some way to protect any frogs from our cats and hens (which LOVE to catch and eat frogs). I have already seen many tiny wee frogs around the corrugated iron sheet.

The grass snake home is a little more complicated, but not much! We have a frame for our compost heap (grass cuttings) which is basically our old chicken run (waaaay too small for hens - more suited for rabbits really). I've put this in a spot which would catch the afternoon sun by our new fence and ensured there are a few "snake holes" under the fence for any passing slow worm or snake to gain entry to the snake des-res (or compost heap). These holes under the fence lead directly to our 3rd and 4th neighbours' gardens on the eastern border -the "wilder gardens" in  "the hood". (We have one neighbour to the west and three to the east - its just our garden is so long - it is the equivalent of three to the east).

All our neighbours are 80 or so years old - and its incredibly peaceful in our garden - and very private too with the mature trees meaning we don'f feel overlooked at all, even though our house is a semi detached bog standard 1953 built ex council house.

The garden extends due north from the house (120 foot like I've said) but actually slopes down towards the house (due south) - so in actual fact we have a south facing, north-south aligned garden. 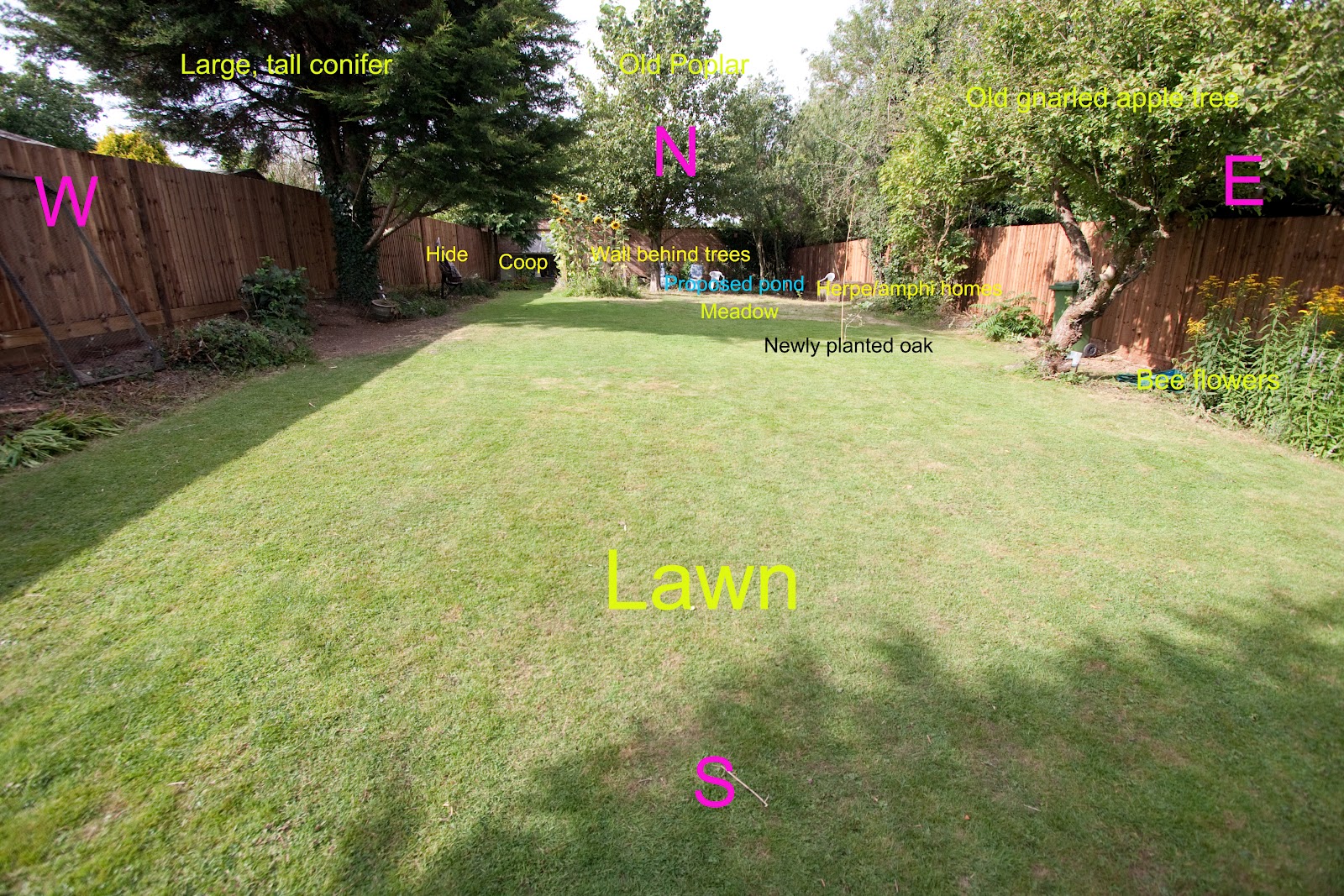 I have thought of blogging a detailed, step-by-step report of how our "wildlife garden" is progressing, but I think I'll take a few pictures now and again for personal records and leave it at that. We have had ownership of the property and garden now for just over one year (370 days to be exact) and are only really getting to come up with firm ideas of what we'd like to do with it. A pond is a definite plan - and I'll probably look to dig one in before the end of the year and fill it over the winter with water-butt rain water. I have been documenting "wildlife highlights" (and weather notes) in the garden since 31st August 2011 and at the beginning of September this year (2012) I will blog a "first year report" of garden notes.

That's a little background then (or a lot of background I guess) but what have I been seeing recently?

You know.... it feels quite strange to me at present. We've had a lovely summery week of weather (lots of sun, 28c, high humidity) but everything I hear or see smacks of Autumn. Strange.

Our two remaining hens (Trouble and Conker) have been helping me clear areas in the garden and move the compost heap (herpe home) and we have been followed around the garden by robins. I have heard our local robins begin to sing their plaintiff autumnal songs in the last week (there is a definite change in song for robins as the year progresses in case you'd not realised it - many songbirds stop singing as the breeding season starts or nears an end, but the robin changes its tune from bubbly warble in the spring and summer to a quite sad song as autumn begins).

We've had our first apple drop (hardly any fruit this year due to a terrible blossom season) and our first leaf drop in the stiff breezes yesterday. Bearing in mind we didnt lose our large poplar leaves until well into November last year  - mid August does seem a little early to begin to lose leaves?

The sunflowers have large drooping heads which are losing their yellow petals daily and long-tailed tits have already formed their autumn /winter flocks of 8 or 9 or so. One such flock visited our damson trees yesterday evening.

Even the grass (both our "meadow" part of the garden which I cut for the first time yesterday, and our more "formal lawn") hasn't seemed to have grown much in the past three weeks - very autumnal.

Don't get me wrong - everything is still green and quite lush (after the spring and early summer rains), but there does seem to be an autumnal change afoot, despite the town pigeons mating on our roof, the second coot broods on local rivers and one or two very young robins (no red breast, just speckles) hopping on and off our new fences...

Summer is still here though - as I spent yesterday mowing lawns and watching a beautiful migrant hawker hunt* for a good two hours over the garden I was set upon by a female splayed deer fly. These are horseflies - eeeevil things with the most psychedelic eyes imagineable. They are often found near heaths or bogs, damp meadows and water - I have no idea where this one came from though.

*It was very amusing (at least to me) to watch this big dragonfly chase dandelion seed heads through the garden - thinking they were insects (food of course for the dragonfly) before realising they were not lunch at all!

Once in Scotland, I ran a competition with a few friends I'd gone on holiday with (a YOC holiday to Aigas) - to see who could stand a horsefly biting their hand for the longest time. I was about 15 at the time. I won the competition and lost the scar (a red dot) on my hand only about 15 years later! I thought about grabbing my first ever photograph of a horsefly's eyes yesterday as it settled on my arm and prepared to bite - but I though better of it and shooed it away! (NB the Splayed horsefly is often known as the "blind horsefly" as shooing it away tends to have no effect - when it wants a bite - it becomes absolutely tunnel visioned - even if it dies getting a meal!)

There are more and more mosquitos in the garden now also, but mercifully the clouds of whining midges seem to have gone.

There are more butterflies around than there has been for some time - the peacocks have finally arrived (months late), there is always a holly blue dancing in and out of the damson trees, a few speckled woods under the poplar and borders and the odd meadow brown on the lawn. Then of course there are the gatekeepers taking nectar from the yellow bee flowers and buddleja - and joined there by plenty of honey bees and striped drone flies - very nice to see!

The garden's first common darter dragonfly appeared in the early evening yesterday but didn't stay long (that will change when I get my pond dug) and taking of insects, on my travels to see our local little owls this week I happened across a lovely furry white ermine moth caterpillar  (black, unlike the white adult) - lovely to see.

I have not seen (nor heard) swifts for over a week now (although I know Anna saw some in Kent last weekend). I still hope to see one or two before the end of my week off - and I do remember that last year I saw my latest ever swift in the first week of September, over our garden - although last year was VERY different to this year for British breeding swifts....

I hear the weather is due to change again this week - bands of light rain and much cooler - but I hope that my week off will present me with more opportunities to get outside and see wat g'wan, after the Olympics has finished!

I actually don't think summer 2012 is over yet - I clearly remember camping in Devon six or seven years ago, during the very last week of September - the entire week was set at 28c / 82f - I saw not a cloud in the sky all week and was surrounded by flocks of  migrating swallows and martins - so lets hope for an Indian summer again this year eh?!

Oh.... before I forget.... if the skies are clear for you tonight - might be worth sitting out in the garden for an hour or so and looking up into the night sky (for those of you that know the night sky - look around the constellation Cassiopea). The perseid meteor shower reaches a peak in the next few nights - and these are often pretty reliable showers to watch...