On Friday 18th May I'd noticed that the air had become a little warmer of late, a little humidity had crept into the sky and the Thames insects had reacted accordingly - May bugs and Mayflies were all in the air - dancing over the still swollen river or fresh green tree tops nearby.

Our kittens were transfixed by a low-flying bat in the garden at dusk on Friday evening - it did seem like a change (from the weeks of rain, hail, cold temperatures and wind) was (is) in the air.

Yesterday, to make the most of the change in feel of the weather, after sitting in the garden with the hens for a couple of hours, watching courting swifts scream and dance above the house, Anna and I went for a little walk around one of my favourite British nature reserves yesterday afternoon  - it was still, warm if a little on the muggy side, dry and cloudy - its so much nicer when the wind stops!

As soon as we had parked the car and headed through a hedge into the reserve proper, Anna and I were treated to the sound of a nightingale belting out its unbelievably pure song from a hawthorn thicket.

I am very lucky really - even though we've moved about 15miles from this particular nature reserve, I used to do a little voluntary work here and then became well aware that the reserve has a really healthy nightingale population during the summer - so healthy in fact that birdwatchers from up to a hundred miles away are said to get their annual "nightingale fix" at the spot.

If you've never heard a nightingale sing before, you're really missing out.

I admit, I (personally) find many songbirds beautiful to listen to - the deep, fruity overtones of a blackbird on a tv aerial, the way the tiny wren can belt out its song of such volume, even the messy warble of the humble dunnock - so I might be biased - but if you do get the chance to go and listen to a nightingale sing - then take the chance!

For those of you that won't get the chance (or won't take it), you could always click here - but its really not the same as being there...

What else did we see on our little walk yesterday? Plenty of swifts, swallows and sand martins (which seem to be re-discovering the sand martin bank I helped redig out a year ago), a nuthatch, a hobby drifting by at height and a garden bumblebees' nest (which was half-dug-out by a badger by the look of it).

So.... is the weather due to change then?

You might remember that a month ago (almost to the day) I mentioned that the rest of April and May was forecast to be very cold (for the time of year) - and unseasonably wet. A month on and we've had weeks of rain, cool temperatures, hail, there's been snow in the north, tornados in the midlands - so I'd say that particular forecast was pretty accurate although I admit.... the last week of May (upcoming) is set to be very warm.......

What of this change then?

Well.... the jetstream has been buckled around Britain for a good 6 weeks now - but seems to have changed again now. 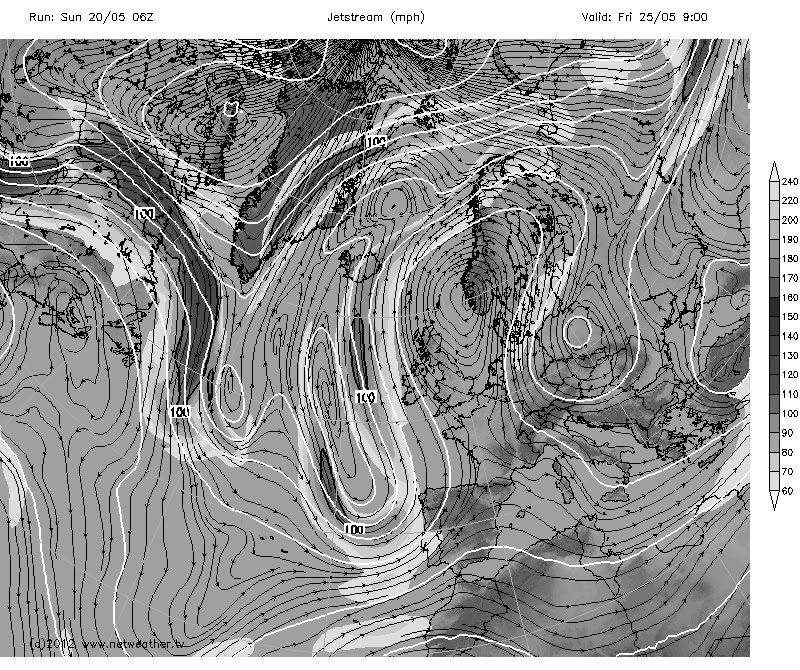 This week will be markedly warmer than of late (up to 25c by Thursday 24th May maybe).

Summer may not officially begin for another month (again, virtually to the day) but the "nights" are belting out their songs from the hedgerows and looks like the weather is set to respond.... for at least this week anyway...